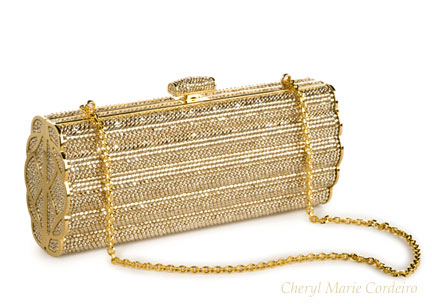 Fluted by Judith Leiber. This gold minaudiere or evening bag is decorated with Austrian crystals. It has a detachable chain strap and push down snap closure.

What inspires me are people who believe in themselves and who work in unending devotion to build and live their dream. Such ambitions as seen in Coco Chanel, Louis Vuitton and modern inspirations such as Tyra Banks and Donald Trump, often also produce unrivaled distinction in their work.

Judith Leiber and her work is one such inspiration of mine. Born in 1921, she began her own business and line of handbags in 1963 (retired in 1998). It isn’t only her exotic designs that are eye-catching as works of art (now found in renowned museums such as the Smithsonian in Washington, the V&A in London and the Met Museum in New York City), but her acute detail to attention and quality. 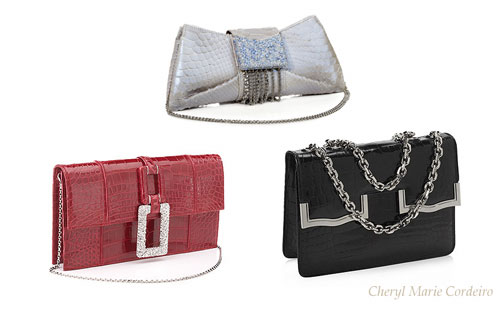 Evenings bags by Judith Leiber, made in exotic skins in basic wardrobe colours. Mini Twilight, a soft frosted python bag that is both a clutch and a shoulder bag. Red Shimmer, made of crocodile with magnetic flap closure and Austrian crystal trim. Grace, a black coloured bag in crocodile.

These days, Judith Leiber the label, carries more than bags, with eyewear, fine jewellery and crystal miniatures such as pill boxes. The items are sold in exclusive boutiques around the world and in the USA, there are just about five outlets in total, in Atlanta, Las Vegas (2 locations), Orange County, and New York City.

The current exclusive stunner from Leiber is this Precious Rose, handcrafted in the USA: 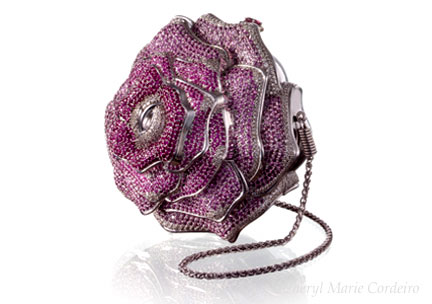 This minaudiére is crafted in 18k white gold with 42.56 carats of diamonds and approximately the same amount of pink sapphires.

Judith’s husband, Gerson Leiber is also an accomplished artist and a selection of both their works can be found at The Leiber Collection, at the Leiber Museum.