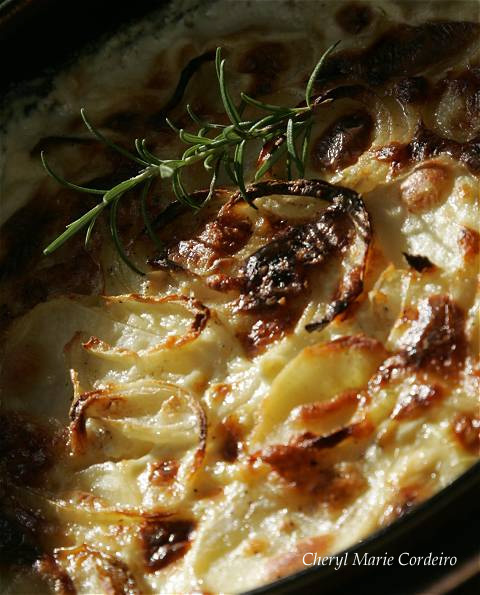 Potato Gratin has fallen a bit in disrepute after a decade of largely misdirected health consciousness. This Quick and dirty version of potato gratin might be just the right thing to go with a hearty beef dinner, flanked by a deep red and powerful Chianti.
Photo © Jan-Erik Nilsson and Cheryl Cordeiro-Nilsson for Cheryl Marie Cordeiro 2010

Everything goes in circles and so do trends in cooking. Not long ago two crossed carrots on a white plate was the height of fashion. Then health obsession made people think that the fat we eat is the same as that we put on our hips, so we were supposed to eat carbohydrates instead, as if a diet of pasta, bread and artificial sweeteners would make us slim. Then carbohydrates became bad and the focus turned to meats and not just any types of meat but lean white meat.

Since I arrived in Sweden about ten years ago I have had reason to question the wisdom in food trends. A quick glance through family photos tells me that throughout the ages people have lived long and healthy lives eating whatever they liked and cooking anything they liked, whether Kway Chap or pineapple tarts, so long as they did not overeat. Julia Child and her husband, Paul Cushing Child for example lived past the age of 90 based on a French diet full of butter, butter and more butter!

So in this spirit I felt I would like to revive a potato classic, just an ordinary gratin that will fit neatly with just about any solid piece of meat you can think of. No dainty dishes, but solid meat based ones. Food that goes ‘- Mooooo!’ in the dark.

The problem with the Internet, I have just noticed, is that it doesn’t differentiate between good or bad when you search and the number of useless recipes has by some kind of magic just quadrupled over the last few months. By reading them I see that many authors are just making fun of you, wasting your time, can’t cook, have for some reason of their own left out some key ingredient, or by a plain stupidity just written that you should use one kg of lard instead of one tbs. None of which are likely to improve your mood if you are in a rush to double-check something while hearing that your dinner guests have just arrived to the driveway outside of your house.

So I’ll share my way of cooking this dish in a basic way, easy to check, and with the spiced up gourmet variation after the main recipe that you can pick ideas from.

Potato Gratin in its basic form is not exactly rocket science so I’ll give it to you straight. 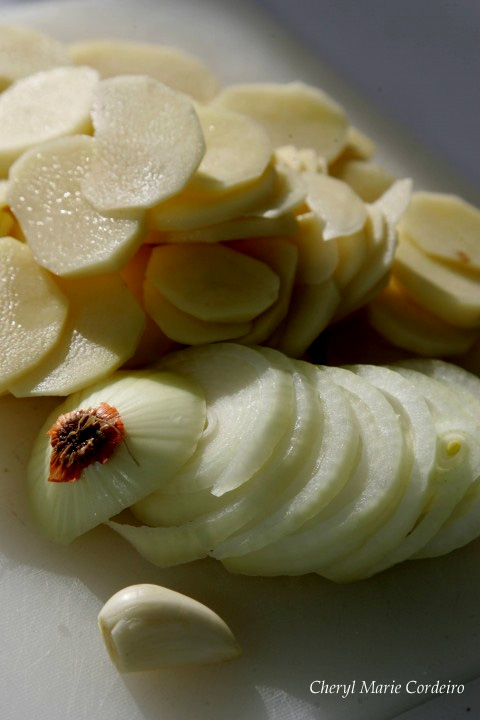 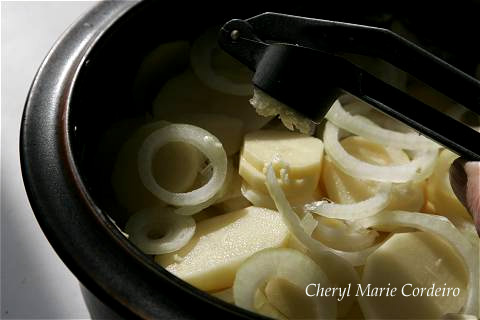 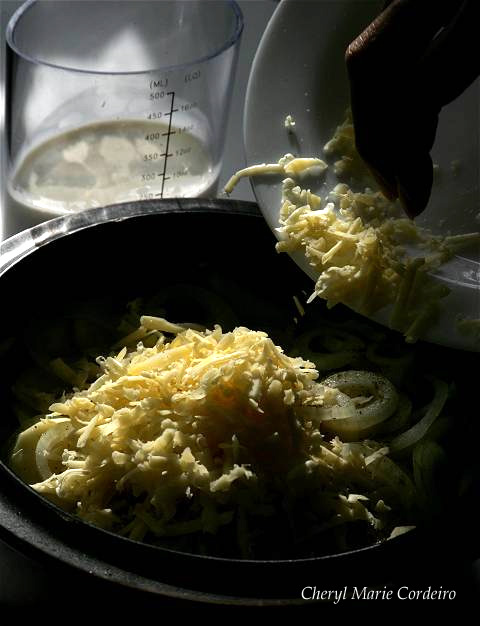 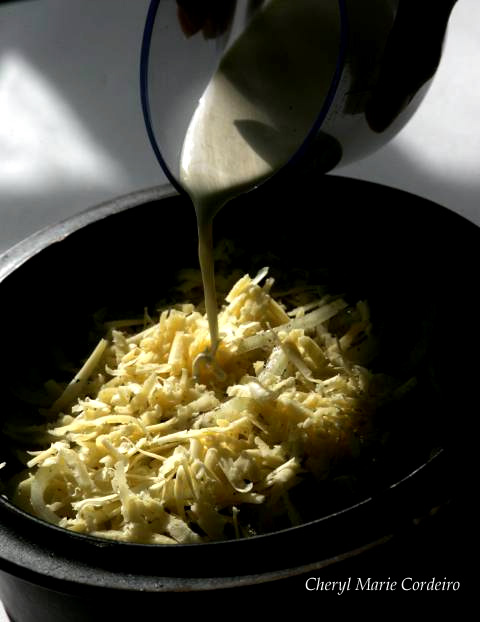 Pour milk and cream mixture into the pot, stir, flatten the mixture and check that the liquid is just barely visible among the potato slices. Bake.

Cooking time for this pot is 30 minutes with no cover + 30 minutes with cover. Temperature ca 200 centigrades. Cover the pot when it has got the colour you like. Check for ready with a stick.

Then what about the gourmet non quick and dirty way you might ask?

If you would like to improve on this basic version here’s my suggestion:

Start with braising 3 sliced shallots and 2 chopped up cloves of garlic in butter, add some cream mix by and by until you have a nice stew. Add in the potato slices and the remaining cream mix plus salt and pepper. Stir and slow cook under lid for about 15 minutes. Now the thin potato slices should be almost done. Pour this mixture into a buttered pan. Bake in ca 200 centigrade until it starts taking color, then drizzle with grated Parmigiano cheese and bake until done.

In this way you will reduce the total cooking time while adding some more fiddling on your part. The sweet shallots will be mostly unnoticeable in the gratin. Parmigiano is a unique cheese in that it does not melt or get stringy while adding a delicious crust and while containing a natural flavour enhancer will add sparkle to the dish.

Tricks of the trade.

Half full cream and half milk usually gives an ok result while more cream will give a fuller taste. The fattiness of this dish is mostly depending on the amount and type of cheese you use. Too much fat will honestly give a very old fashioned feel to this dish. Too much onion might be overbearing and overpower the dish you might want to serve with the gratin so shallots might be a good idea. Depending on the saltiness of the cheese you might want to skip adding extra salt altogether.

Chef’s secret: add a few pinches of Gorgonzola if you plan to serve this this with beef! 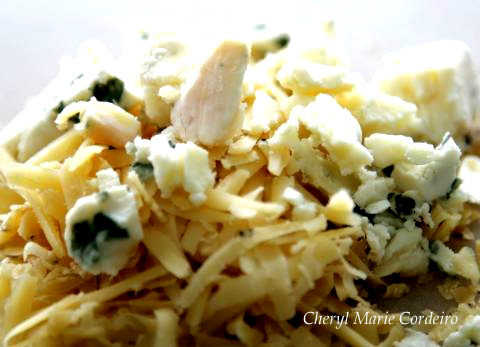 For flavour when planning to serve with beef, mix some Gorgonzola with the grated hard cheese 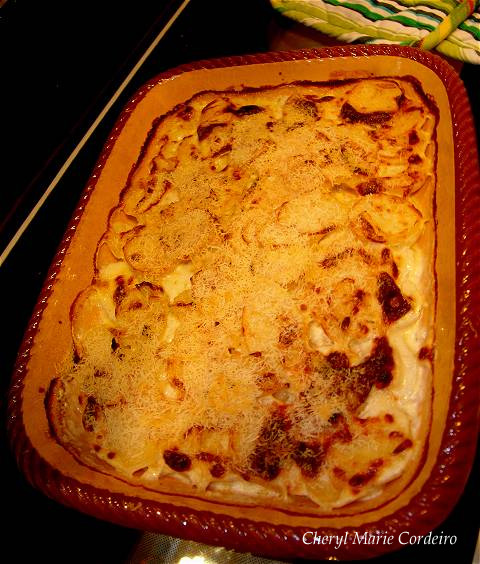 This version of the Potato Gratin is smoother and takes a shorter baking time in the oven as all ingredients are pre-cooked. Perfect for individual serving in a bowl too, where smaller oven friendly bowls can each be topped with cheese and baked just prior to serving.