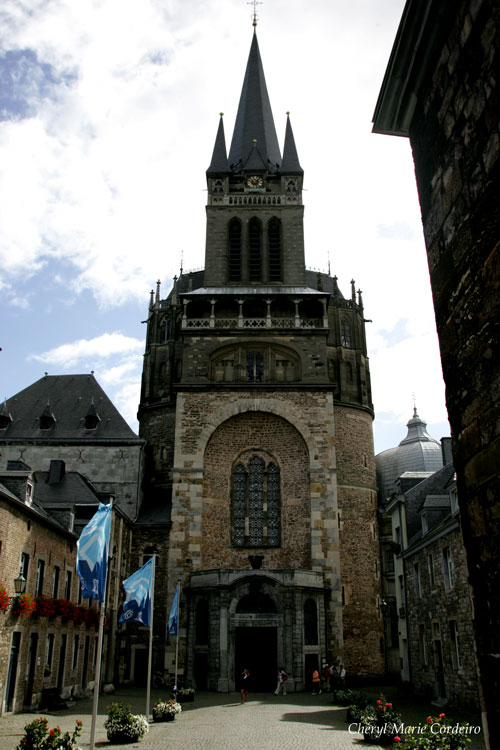 A view of the Aachen Cathedral as it looks today.

Aachen Cathedral was formerly the palace church of Charles the Great, later known as Charlemagne. While he was perhaps not the only founding father of Western civilization as we know it, Charlemagne was still very important for reviving learning, moral and ethics as leading principles for government. And while the unity in post-roman Europe did not last too long, he brought with him the much needed uniting force behind it.

Upon entering the Cathedral grounds, even at small places such as the stone paved yard outside the former workshop entrance where western European arts and culture were to be revived in the eight century, you feel close to history.

Despite that the city of Aachen got most of its buildings and churches destroyed by shells and bombings during the Second World War it still gives a great impression. Much has been restored and important relics including the belt and flagellation rope of Jesus, the belt of Mary, the scull and right arm of Charlemagne himself and many others are still on display in the treasury. 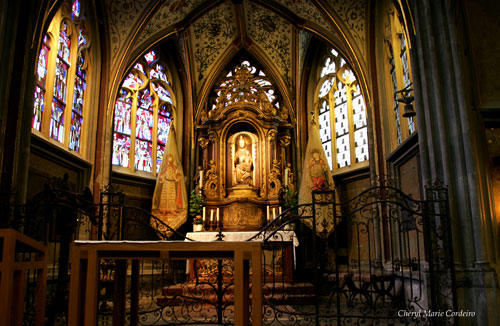 A view of an altar within the Cathedral.

A favourite feature of mine within this Cathedral was the numerous large and beautiful stained glass windows. As with most other details in this Cathedral, they were made with such precision, care and astounding craftsmanship. 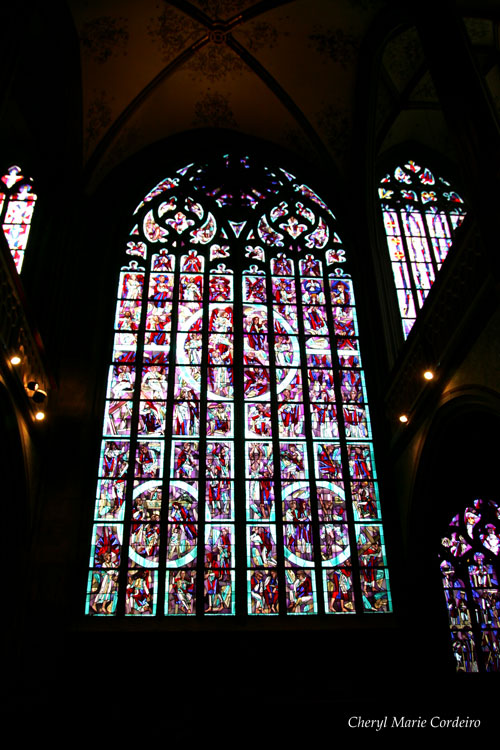 A stained glass window within the Cathedral.

Part of the Cathedral is the Palatine Chapel. Built by Charlemagne, its octagon shape is crowned by a cupola that rises about 31 meters above ground such that it was the highest vaulted interior in northern Europe for many centuries. Since 1882, its majestic domed ceiling has been covered with golden mosaic tiles in its every square inch, by the Venetian artist Salviati.

Standing beneath this architectural masterpiece, peering up into the golden ceiling leaves one in awe at the conception of this place and the mathematical precision needed in its design to make it all fit and hold together! 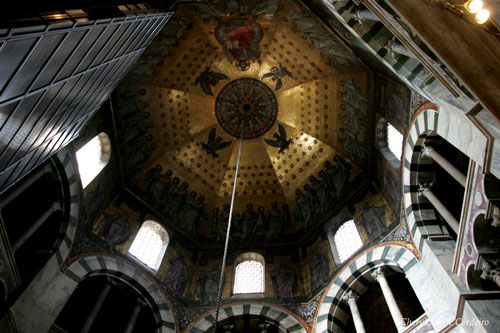 The interior of the Palatine Chapel, built in an octagonal shape with tiled mosaics at the top of the dome in gold. Originally built by Charlemagne.

Hanging from the domed vault (in the picture above) is Frederick Barbarossa’s Chandelier measuring a whopping 4.2m in diameter. This massive chandelier, created in 1165-84 in Aachen to celebrate Charlemagne’s canonization and dedicated to Mary, is ringed by candles that are only lit on special ocassions, which I think would be a tremendous sight then! 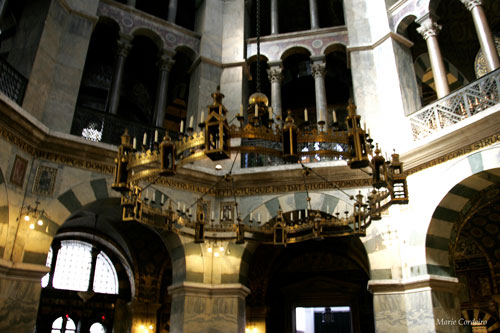 Chandelier commissioned by Frederick Barbarossa and his wife, in ca. 1165. Dedicated to Mother Mary and in celebration of Charlemagne’s canonization.

Located within the Cathedral compounds is the Treasury. 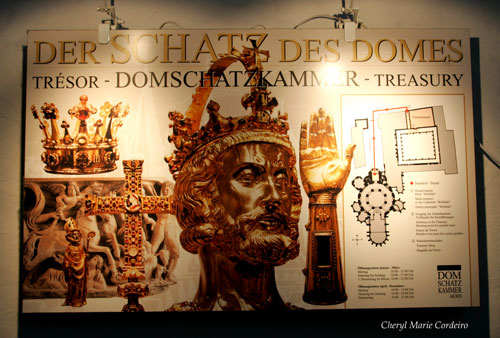 An information board of the Treasury and where it’s located. 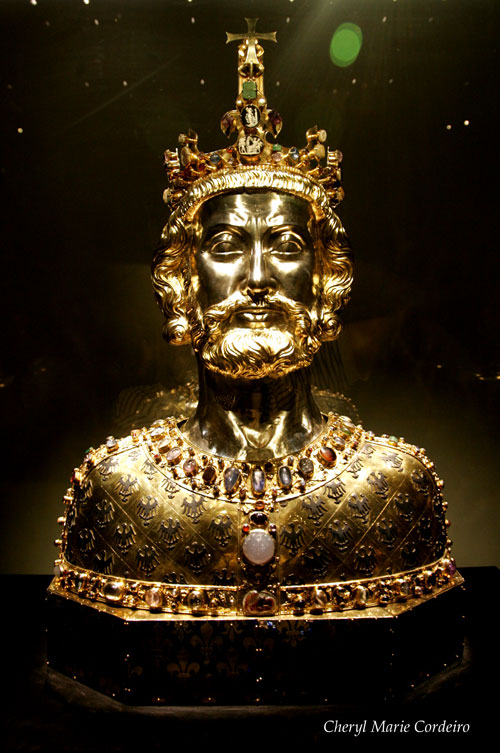 The bust of Charlemagne, containing his skull, commissioned by King Charles IV. 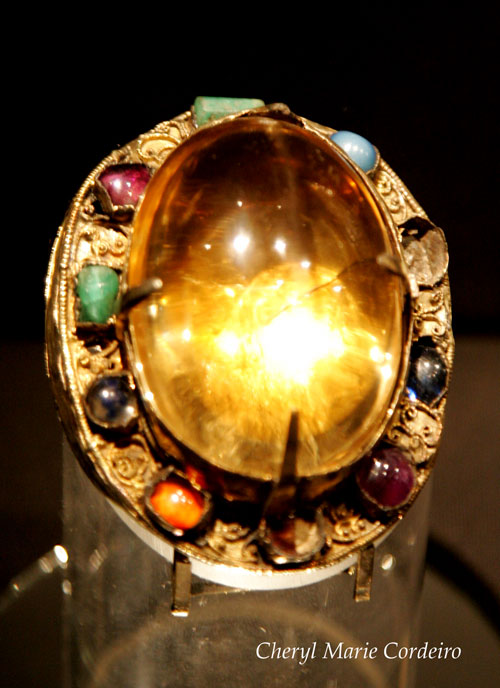 This large citrine gemstone which measures about the size of my palm, used to sit on the Bust of Charlemagne but is now reset into this piece. 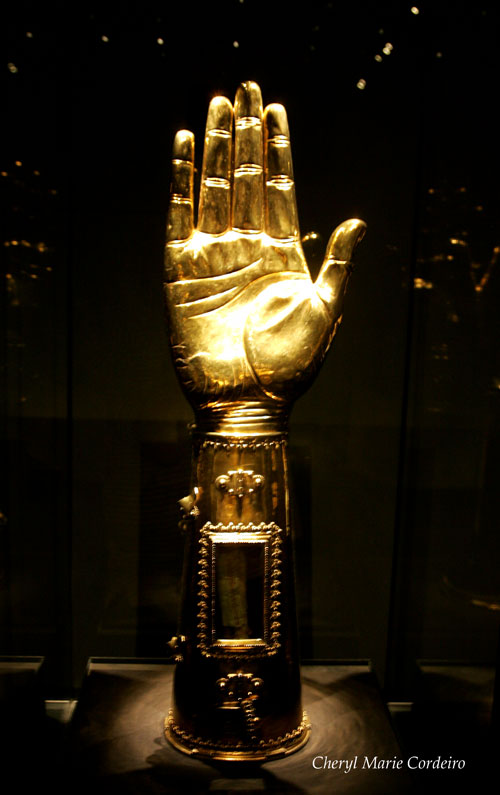 The Arm Reliquary of Charlemagne, containing the ulna and the radius bones of his right arm. Commissioned by King Louis XI of France in 1481.

There is something about medieval jewellery, perhaps the cutting of the stones, the design of the pieces or if it were the stones themselves, that lent a general warm feeling when looking at them. Medieval jewellery definitely lacks the sparkle and dazzle of modern jewellery, where I think there lies their charm. 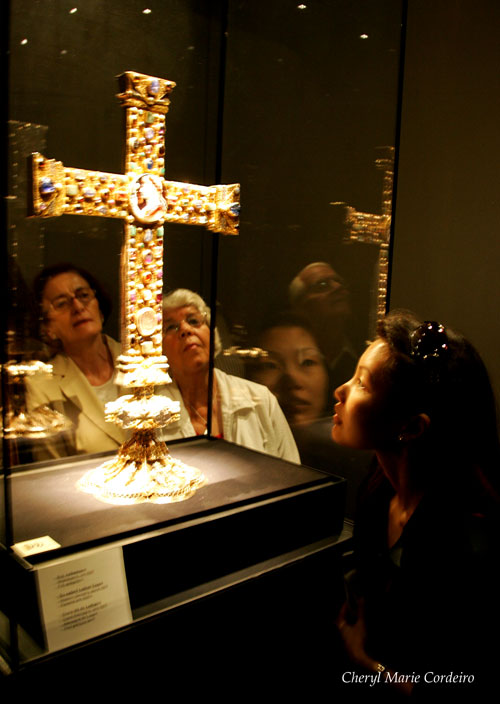 The “Lothair Cross”, still used today to head processions, one of the most valuable objects of medeival goldwork in existence. The front is covered with antique precious stones symbolically depicting the heavenly Jerusalem as a “golden city resplendent with precious stones” as described in the Revelation of St. John (Rev.21).

The golden cross above was done in exquisite detail, front and back. 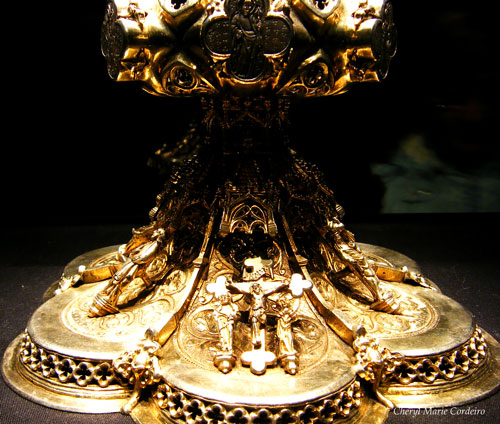 The foot of the cross which is dated later than the cross itself, with its details of a crucified Christ.

Coming out of the Treasury, I found a row of cognac-merlot wooden seats that oddly reminded me of my days growing up in a Convent school. It was thus no surprise to me when I heard a courtyard full of energetic children who seemed to be having a recess of sorts, just beyond the walls that contained these wooden chairs.

The importance of the achievements of Charles the Great cannot be over emphasized. Most Universities in Europe count their origin back to the schools he founded. Even our modern way of writing, with upper and lower case, was established by his efforts.

The fundamental idea in his reform work can be understood when we realize that the original “Mother Goose” was actually the nickname of the mother of Charlemagne himself. She was the Queen “Goosefoot” who married Pippin the Short, the King of the Franks, and was probably the only teacher Charlemagne ever had.

Early impressions are important and despite that Charles the Great himself never learnt to write – busy as he was conquering and uniting the best parts of Europe and founding the Holy Roman Empire – “Mother Goose” has remained the name of nursery rhymes used to teach countless generations of children to read ever since these days.

Looking at the world of today I think the idea of this one 8th century ruler is as important now as it was back then.

There are endless information to be found on the Internet on Aachen and Charlemange. Most are interesting reads. One of the stories from the Second World War tells that during World War Two the Allies repeatedly bombed Aachen. There were 1,984 times during these years that the civilians ran to the shelters. By the time Americans occupied Aachen, it was 85% destroyed by shells and bombs. Germans hoping to protect the remains of Charlemagne had hid them in the woods. The occupying Americans ordered a young G.I. to go and bring his remains back, and the soldier supposedly asked upon his return with the sack of bones, “So, where do I dump this?”

Wikipedia has a gallery of pictures of the Cathedral and Aachen.de has information on guided tours, its openings hours and tips on planning a trip to Aachen.

2 thoughts on “Visiting Charlemange and the Aachen Cathedral”