In an article called Modets guldålder i focus, the Swedish newspaper Dagens Nyheter today announced that the Victoria & Albert (V&A) Museum in London will open their exhibition on fifties couture this weekend, entitled “The golden age of couture. Paris and London 1947 – 1957”.

The post war years of the 1950s presented an opportunity for women to get out of the factories and back to their domain of family and home. It was an era that celebrated the woman and her femininity, affording her time and luxury to be beautiful again. One can expect this exhibition to showcase some excellent collections from leading designers of the time and should therefore not be missed.

Featured designers include Dior, Givenchy, Balenciaga, Norman Hartwell (who with limited resources, produced a wedding dress for Princess Elizabeth in 1947) and Balmain.

Designs in women’s clothing in the 1950s were well known for their nipped waists with mainly two skirt silhouettes – the full skirt and the pencil slim tubular skirt.

With regards to coats, the most influential fashion silhouette was the 1940s swing coat by Jacques Fath. As testament to this trend, a picture of Paris then with people wearing, you guessed it, swing coats. 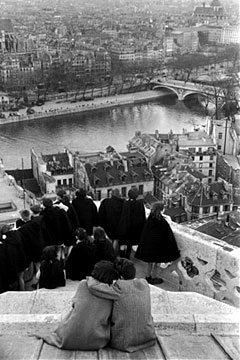 While many influential designers will be featured at this V&A exhibition on 1950s couture, it was Christian Dior who once called Cristobel Balenciaga “the master of us all”. And it didn’t take me long to realize why.

Balenciaga, a featured designer at the V&A and his influences fifty years on

The pictures below are proof of Balenciaga’s continuing influence not only on his legendary fashion house today, as spearheaded by creative director Nicholas Ghesquiére, but on others in his league and thereafter.

Here, a photo by Irving Penn (Style.com) of Lisa Fonssagrives in Balenciaga. This picture appeared in Vogue, 1950 and captured the essence of couture creations in the fifties – sophisticated, bold and maniacally detailed. Characterstics that you seldom see in today’s couture, except perhaps with the exception of Galliano’s work for Dior.

The cost of a couture dress could set its buyer back by USD $400, the equivalent of a household washing machine during that time. 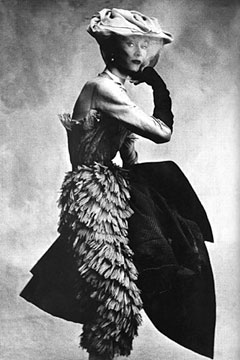 Picture here of detailed work from Balmain on an evening dress, fall-winter 1954-1955. Quoted from Style.com,

The mind-boggling amount of labor that went into each piece of clothing (starting with master weavers and culminating in the ateliers filled with the famous gifted seamstresses known as les petits mains) made every couture garment the fashion equivalent of a Rolls-Royce. 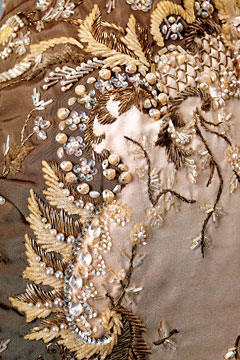 Photo: Courtesy of the Metropolitan Museum of Arts at Style.com

The picture below shows a model wearing a single-breasted skirt suit with wishbone buttoning by Balenciaga, Vogue, 1950. 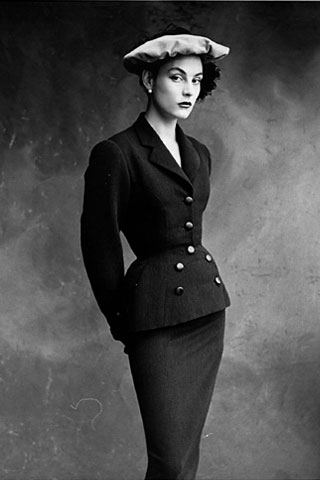 Padding was often used to accentuate and bring about a fuller hip silhouette in Balenciaga’s designs. Today, Alber Elbaz included a hip padding feature in his latest Lanvin collection. 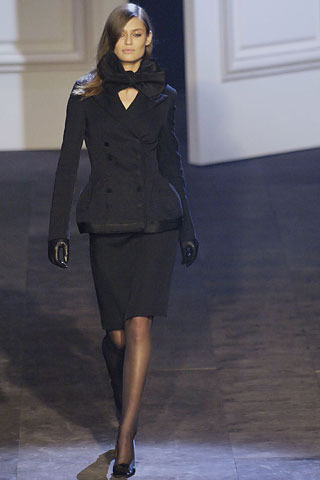 Puff pieces were also prominent in Balenciaga in the fifties. A picture here by Henry Clarke, of a model in pneumatic cuffs, Vogue, 1951. 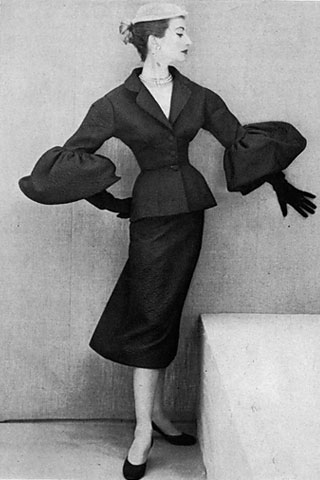 this black silk-cloque suit with V collar and quite-straight skirt is a quiet buildup for the elegance of the great cuffs. (Style.com)

Still influential and stylish today, the oversized cuffs Balenciaga introduced back then finds its way to the shoulders at Bryan Bradley’s Tuleh. 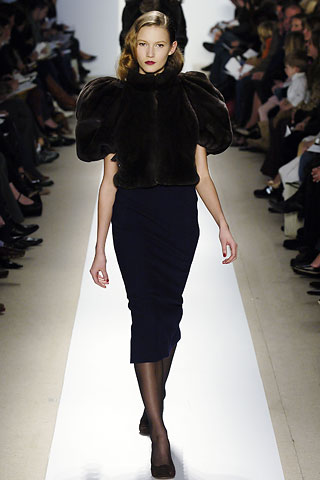 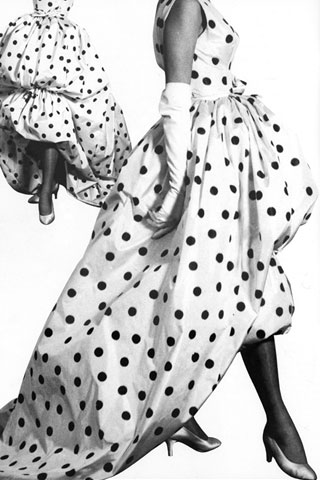 Today, Oscar de la Renta’s knee length tulip dress evokes Balenciaga’s version of nearly 50 years ago in both fabric and form, albeit with a modern twist. Inspiration of the stand away collar is also evident in this dress. 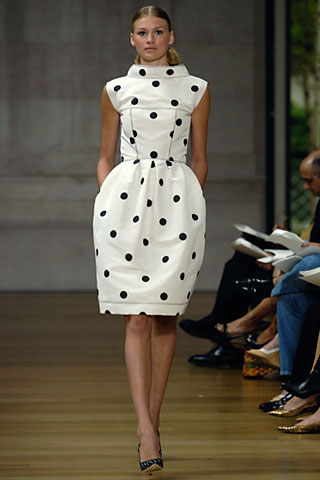 Balenciaga’s take on a swing coat in summer 1961. Not so much an A-line or a tent swing silhouette but cocoon. The excellence in form and cut shows in the picture. 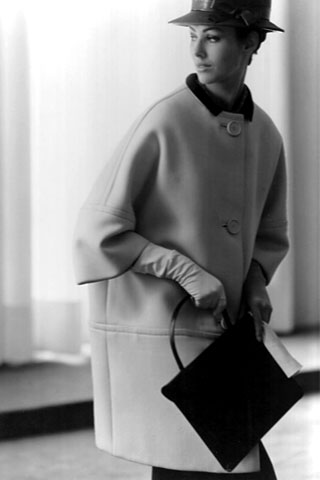 Today, Nicholas Ghesquiére takes the form and design to the present in leather, rather than the heavy material preferred by Balenciaga himself. 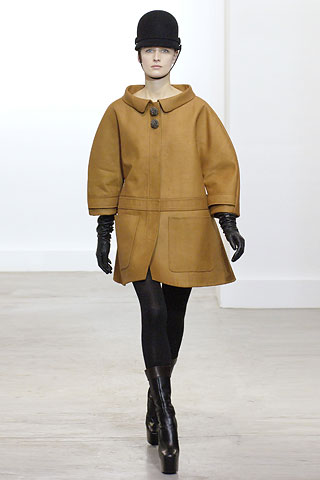 Apart from the change in material, much of the features of this coat remain the same, from the stand away collar to the hip seam and three-quarter sleeves that make way for elbow length gloves.

In fact, Balenciaga’s fall 2006 RTW collection is one of my favourite collections thus far. Here are two more of my personal favourites from that collection. 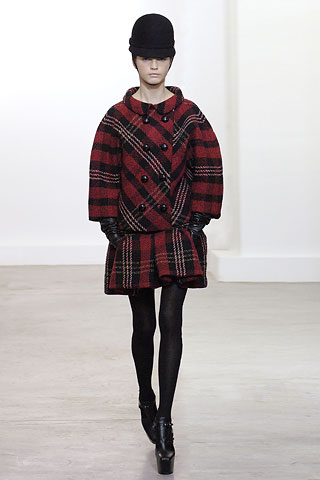 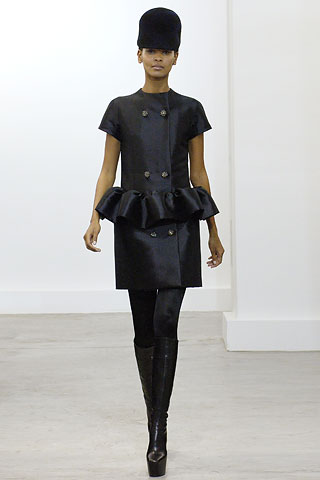 As metioned above, Balenciaga is but one of the featured designers of this V&A Museum exhibtion on couture. I would personally love to spend a day there myself, learning and exploring couture of the fifties.

For more reading on the V&A Museum exhibition and on fifties fashion in Paris and London, visit Dagens Nyheter.

Better yet, drop in on the exhibition if you’re in and about London yourself.

A wonderful post on the V&A Exhibition, at Style Spy.