At MR Cake bakery and café in Gothenburg, Sweden. Offering some of the city’s most visually appealing and innovative desserts, MR Cake is located across Stenpiren at the corner of Comfort Hotel.
Text & Photo © JE Nilsson & CM Cordeiro 2019

Some things in life are meant to be. For example, serendipitously finding my way during lunch hour on the eve of the eve of Christmas, to MR Cake in Gothenburg.

I had been away from Gothenburg for a while, but that was enough given time for some substantial changes to be made in the city centre, with new bridges and roads constructed, and more delightfully, new cafés, eateries and restaurants lining the city’s harbour front.

I adore all varieties of hot chocolates and cakes. But for someone who grew up in Singapore with neighbourhood bakeries and corner kopitiams / coffeeshops serving most any cake and hot drink at the convenience of a skip and a hop, I seem to be moving in life circles that bring me away from cake and café culture living, where all such desires are stemmed.

When I first arrived in Gothenburg in the early 2000s, I was absolutely dismayed that I could not simply up and go to grab a piece of (my evening’s choice of) chocolate cake. A spontaneous day’s activity that I often took for granted in Singapore became impossible when in Sweden, not in the least because I lived in the southern archipelago of the city of Gothenburg, which meant that the nearest café with good hot chocolate and cake, if to be found at all, was at least an hour’s ride away, by boat. I still remember that when in Singapore, the trickiest task of a “hot chocolate and cake” outing was to decide which was to be the favourite café of the moment, and if we couldn’t decide, it would have to be two visits, of which the trickiest task would then to be calculating the distance between the two cafés.

By 2010s, more bakeries and cafés began to open in Gothenburg as the city saw a slow but steady rise in its multinational inhabitants. The foodscape of Gothenburg became more eclectic, and one could as easily find Turkish delight as Swedish Princess Cakes at cafés. The more sturdy tummy sitting Southeast-Asian rice and bean pudding desserts such as those sold in heartland Singapore such as Bengawan Solo have never really grounded themselves in Scandinavian culture. Beans and rice are still food here, not sweets. Still, I delighted in the greater convenience of hot chocolate and cake available in Gothenburg.

Just about a decade on from 2010, I now find myself living and working in the arctic city of Tromsø in northern Norway. While the cosy and compact city of Tromsø is known for its numerous restaurants and cafés, to locate one that serves a good cup of hot chocolate and cake comes across as relatively Sisyphusian (again).

So, imagine the surge of pleasure I felt when I walked into MR Cake in Gothenburg on a note of serendip to Santa Claus in the North Pole. I found Charlie’s Chocolate Factory this Christmas, right in my neighbourhood. Thank you! 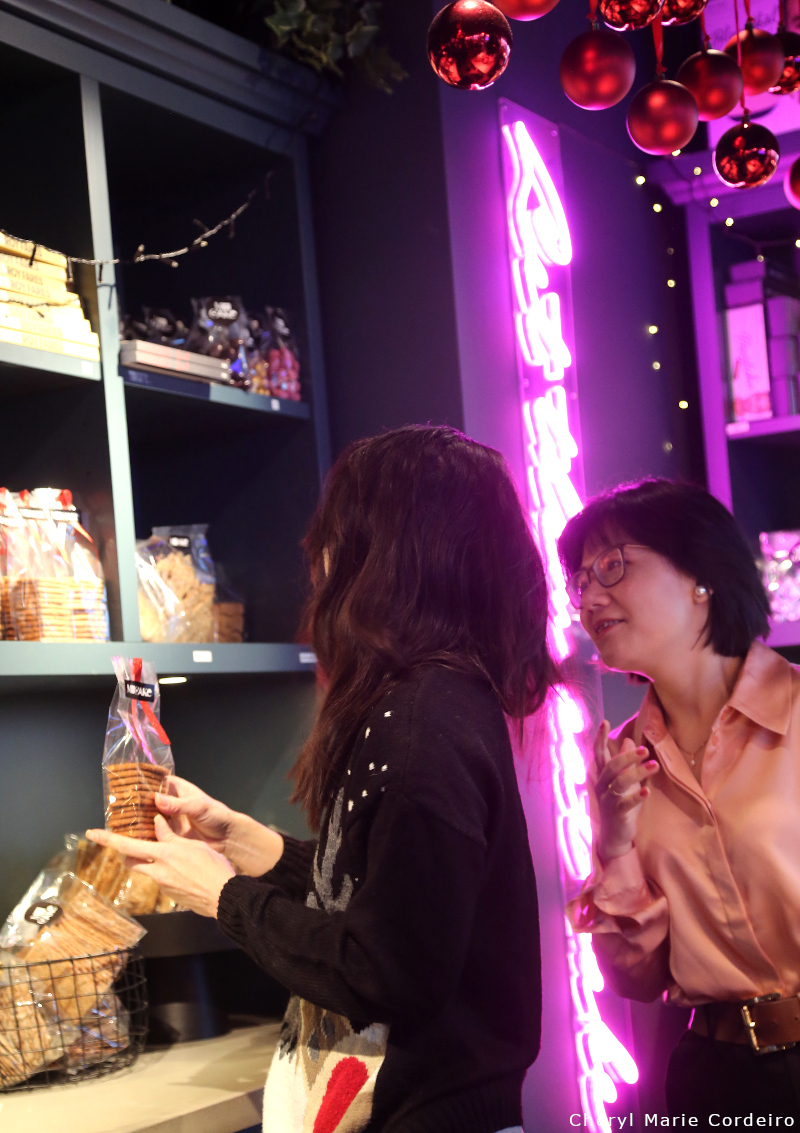 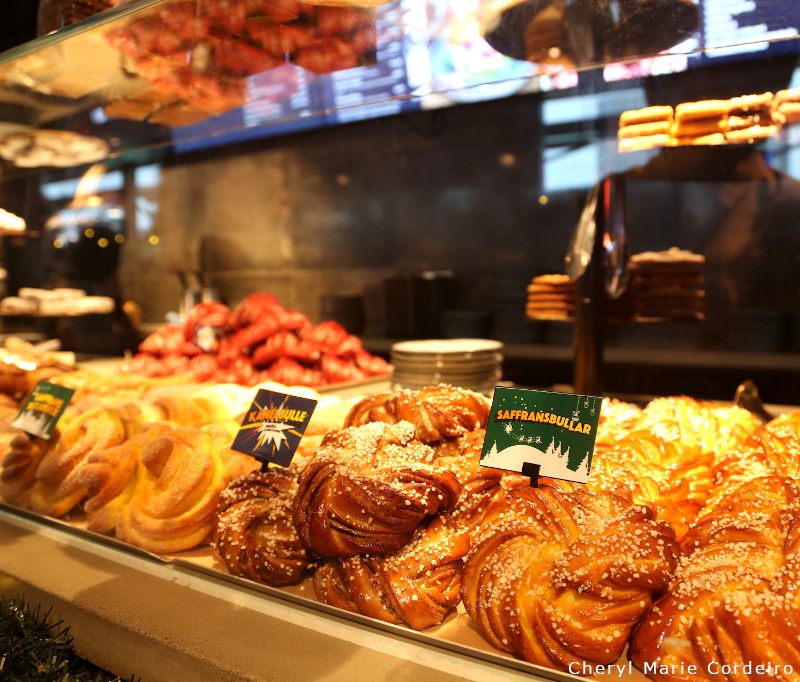 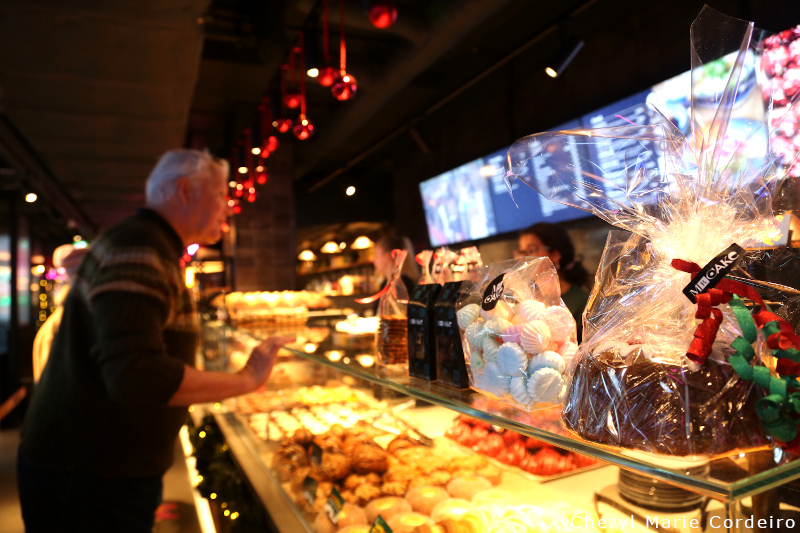 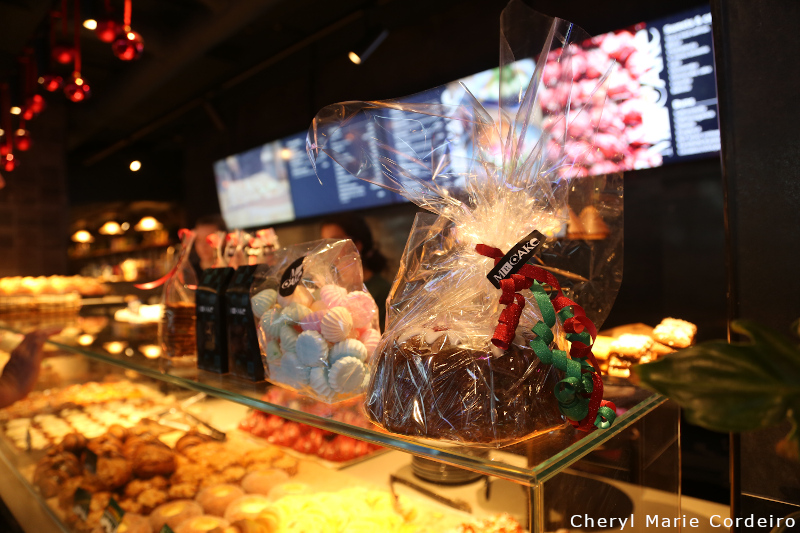 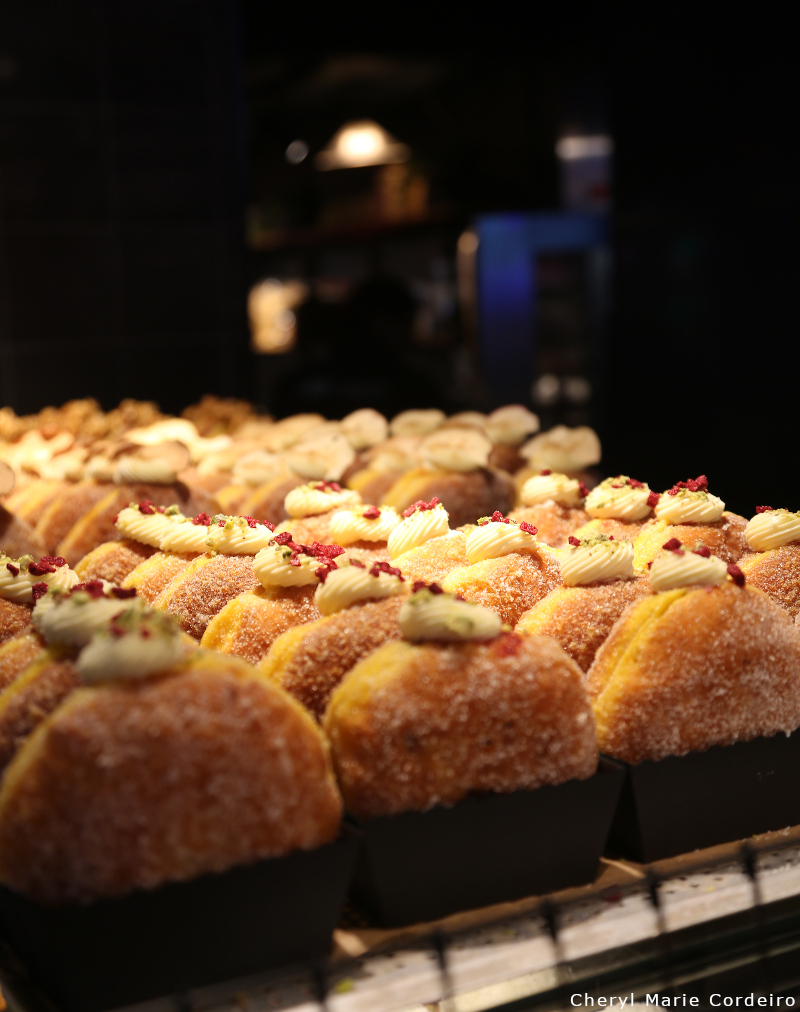 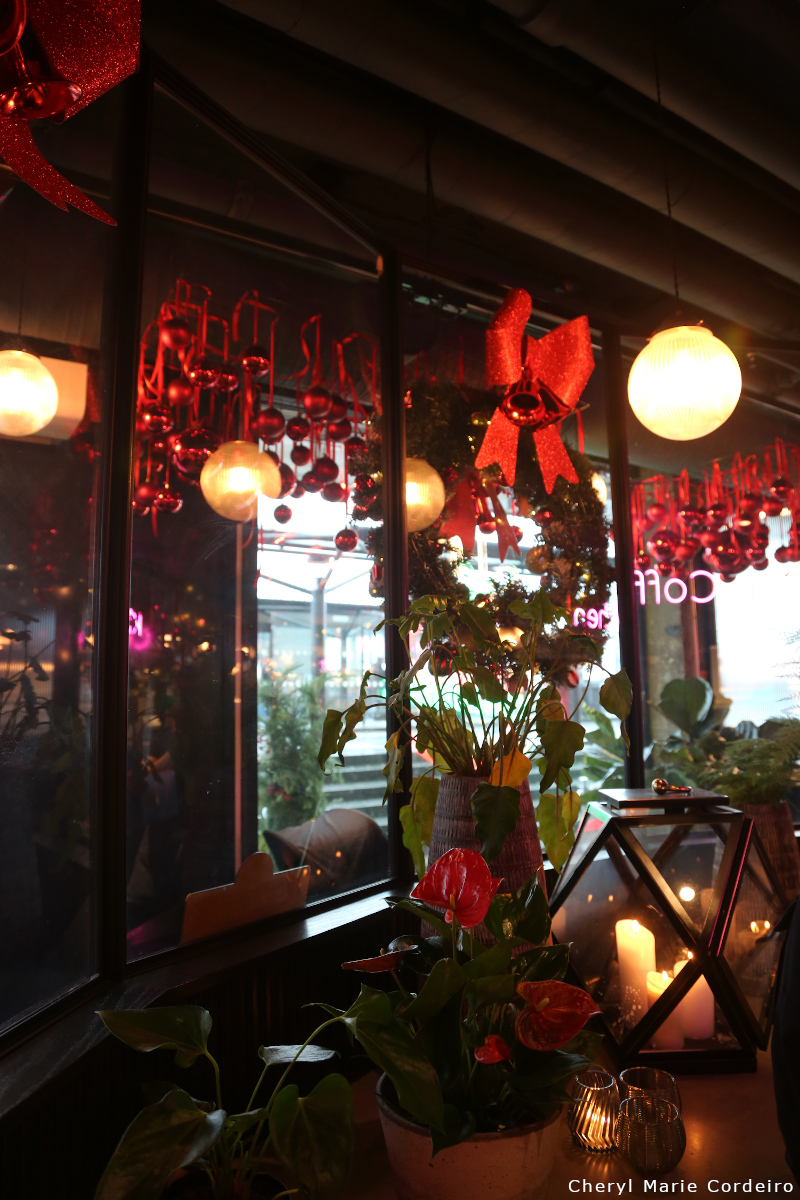 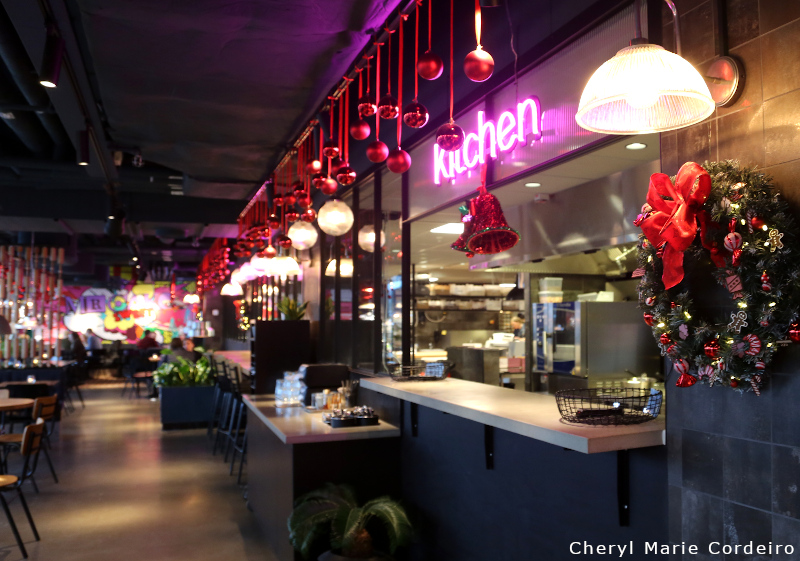 MR Cake co-founder, Roy Fares. He is holding the quintessential MR Cake Red Velvet Christmas Cake. Roy Fares and co-founder to MR Cake partner, Mattias Ljungberg can be found on Swedish television köket.se. The award winning chefs/bakers bring baking tips and recipes on how to put together these gorgeous cakes. 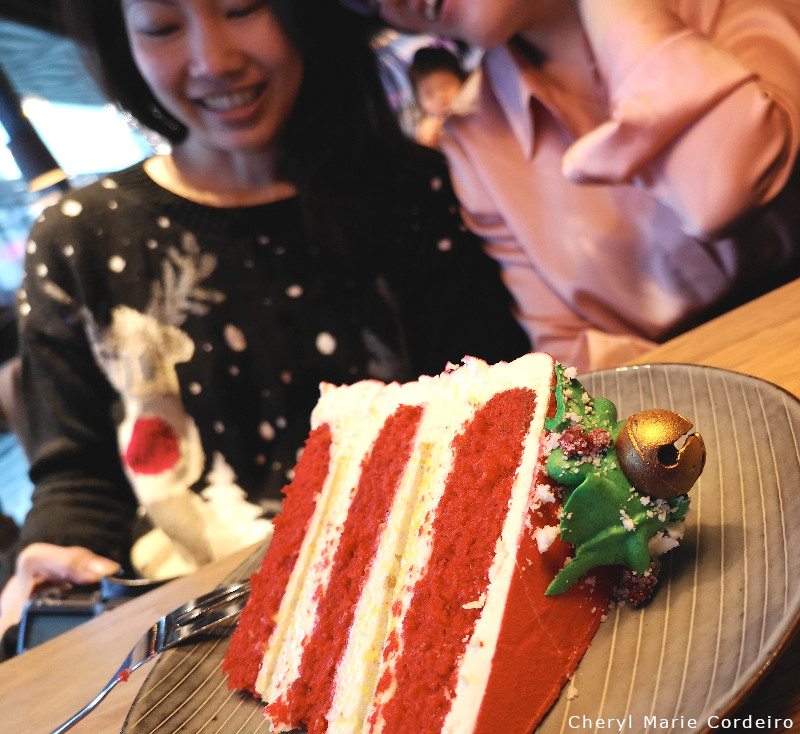 The Red Velvet Christmas Cake is layered with white chocolate mousse, saffronbrulée and a fruit compote made with pear and ginger. Rudolf’s reindeer bell that tops the cake is nothing less than chocolate airbrushed in gold. This slice of cake tastes like a warm winter wonderland. The MR Cake concept is founded on American style bakeries and cafés where the salient theme is supersize and crazy lots. The average consumer in Sweden is however, more lagom. Every. delicious. crumb. counts. The signature dish and soul of a Swedish west coast café – the Räksmörgås or shrimp sandwich. Here, a variant by MR Cake. It isn’t always a white Christmas in Gothenburg city, and brightening the cool winter greys of the outdoors are cups of steamy coffee to be enjoyed by the window of the café. In the background, a fresh baked croissant filled with salmon mousse and salad leaves. Saffranssugarlick. Saffronsbröd in the form of a lussekatt rolled in sugar crystals.