The clear night sky was a velvet obsidian, and the air was winter crisp. Standing dockside in Tromsø harbour whilst waiting for the taxi to arrive, I marveled at how Tromsø night sky shades could range from variations of deep blues to vantablack, depending on the time of year. That the seasonal mørketid is all dark is not true. Experiencing a winter´s night such as this in January and February (just past mørketid), when the region records its lowest annual temperatures, releases in you a feeling of the intense magic associated with living in a city located in the Arctic.

As my taxi left the Tromsø harbour for the main road, I watched how the light from the street lamps lining the Tromsø bridge were mirrored in the water below. I said to the taxi driver, that it was a beautiful winter’s night. “Yes” he replied, keeping his eye on the road. “It is a nice night. But too much snow.” Not hearing any reply, he added with a slight touch of cynicism, “We are near the North Pole you know.” Still looking out through the window, I noted how the boats moored at the quay swayed with the wind. One of them was a beautifully restored wood hulled passenger boat from the 1950s. Its name is M/S Bjørnvåg.

Having sailed from Trondheim to Northern Norway in the past year, the M/S Bjørnvåg is a culinary gem docked fairly anonymously in Tromsø harbour. Over the winter season it is kept warm and comfortable, partly tucked in under a tarpaulin. If you sweep your eyes over the harbour front, you might not even notice it.

As someone who was born in Singapore and who has lived in Scandinavia for almost 20 years, I have noticed that food and dining experiences can make people either feel as if they are at home, or that they are indeed very far from home. The M/S Bjørnvåg kitchen offers both, in what I think is a fine balance of elements in what is comfortably familiar, and what is new and exciting.

The following are the ingredients:

Boats are a coastal Scandinavian lifestyle. It would be almost unforgivable to not own at least a dinghy, even if its only purpose is to take you from one island to another, to buy ice-cream.

The M/S Bjørnvåg is not a dinghy. It is in fact a sturdily constructed double-ribbed passenger ferry from 1954. It was used to service the coast of Møre in Western Norway. The county of Møre and Romsdal was founded in 1936. The name ‘Møre’ literally means ‘coastland’ in old Norse. The region is known for its shipping and ship building industry. In March 1978 it was granted three gold Viking ships on a blue background as its regional symbol.

Immediately noticeable when boarding the M/S Bjørnvåg is its carefully restored interior. From its fine-grained upper wooden decks to its polished mahogany tabletops, and chairs lined with sheepskin to keep the seats warm and cozy in the winter you cannot help but feel as if you are stepping into some kind of adventure, whilst at the same time feel right at home. At the heart of the dining space you find a cast iron fire place. The red glow from this small oven immediately brought me back to an evening spent in one of my favourite restaurants, Los Caracoles [1,2], in Barri Gòtic in Barcelona. The red glow of the roaring fireplace at Los Caracoles was for me the heart of the Casa Bofarull. I loved how the place was alive, serving excellent food made in genuine spirit. These same elements I came to see on the M/S Bjørnvåg at my first step onboard.

In the case of M/S Bjørnvåg, the authentic dining experience is created by the Chef de Cuisine and co-owner of the boat Eivind M. E. Austad and his crew. Onboard for the evening was also Felix Boije af Gennäs, who incidentally, grew up in the Swedish village of Stenungsund, just some 47 km north of Gothenburg where I have spent close to twenty years before moving to Tromsø.

The four persons strong crew of M/S Bjørnvåg are Eivind Austad, Tonje Harøy, Johanna Englund and Felix Boije af Gennäs. Owning a boat is no small commitment. I have personally spent many summers with my neck cranked in unlikely positions, fighting it out with massive colonies of barnacles, having made themselves comfortable on the underside of our boat.

As you listen to Eivind telling about – how he got to acquire the boat, the amount of work that he and his crew have invested in keeping it, their ambitions, and his own personal passion for the culinary arts – you are drawn into a warm little fairy-tale bubble of pure joy. One that you can only experience on rare occasions, such as during an evening at the M/S Bjørnvåg.

Eating in season, “kortreist” food and culinary creativity characterizes the menu onboard. What is served changes with availability. Raw produce is, as far as possible, sourced locally.

The given item on the menu this evening was therefore fresh caught migrating cod, or skrei (Gadus morhua), that between winter and spring each year makes its annual migration to spawn, off the area between Finnmark in Troms, and the Mørek coast further south.

The food philosophy onboard is zero waste, and every part of the cod is used while preparing the food. The traditional manner of cooking skrei is to steam or broil. The broiled cod is then served plain, with a side of cod roe and cod tongue. In an evening´s sensuous twist, Eivind chose to serve one of Northern Norway´s signature seasonal dishes in consecutive sequence. First, a small plate of cod roe drizzled over with sweet cinnamon marinated macadamia nuts. This was followed by grilled skrei, served on top of a luscious bed of fresh greens. Its deliciously serendipitous feature? The sliver of cod skin sitting on top was roasted to a perfect crisp.

I could not help but wonder, what drinks would be paired to the entrée of roasted seaweed, crisp cod skin and dried cod? What was suggested was a 2016 French white wine from the vineyard of the Gouffier family in Côte Chalonnaise. It worked excellent. The aromatic grapes had given the wine a textured spicy notes of fennel and oak that fitted well with the seafood courses.

Feeling at home onboard

Behind the scene of serving up good food and exclusive wines, watching Eivind dance to Rhythm and Blues of the fifties streaming off his vintage wooden radio cabinet whilst cooking dinner, are all good vibes.

Experiential dining is a concept that is often discussed not only in the food industry but also among culinary interested academics. While scholars can debate the numerous frameworks of successful operations, what could be agreed upon is that a having a list of ingredients to a good dinner setting is no guarantee of a successful execution. In the case of the M/S Bjørnvåg, the evening’s striking experience was not created only by the food but also by the warm microcosm brought alive by Eivind and his heart-warming crew.

The opportunity to dine onboard the M/S Bjørnvåg made it a memorable evening. Even if we did not leave the quay, it still felt like an adventure. 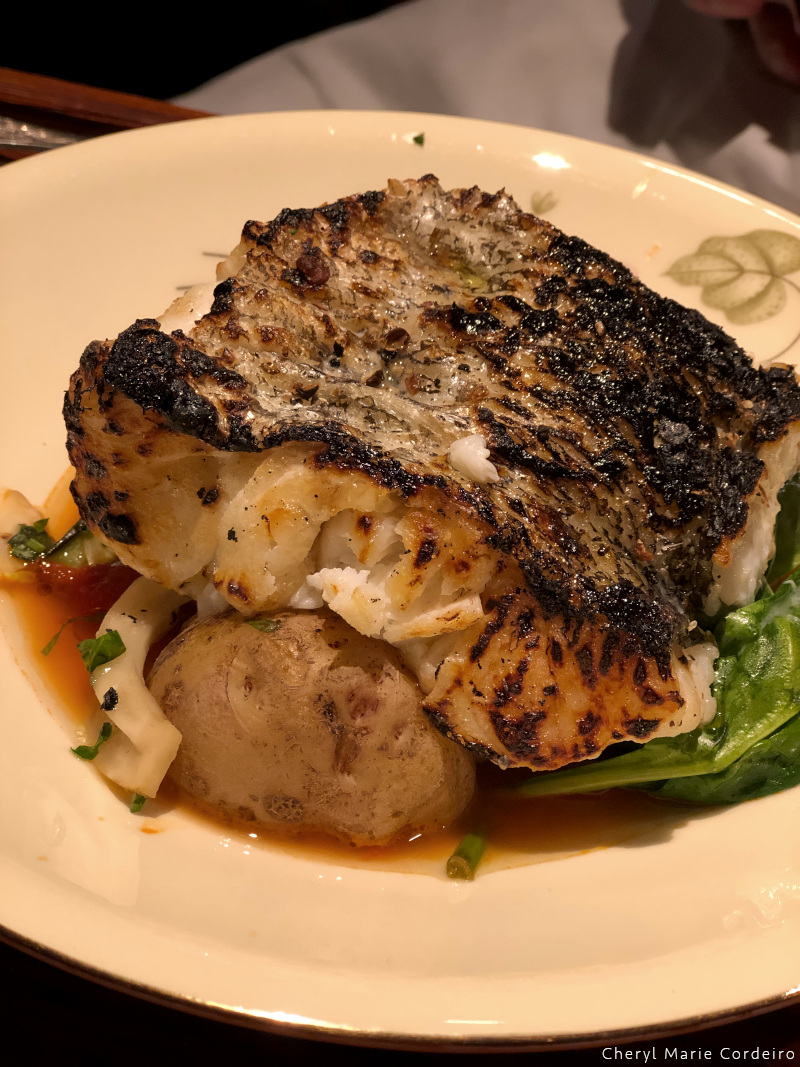 Skrei or wild caught cod, grilled to perfection, served on a bed of leafy greens and potatoes. 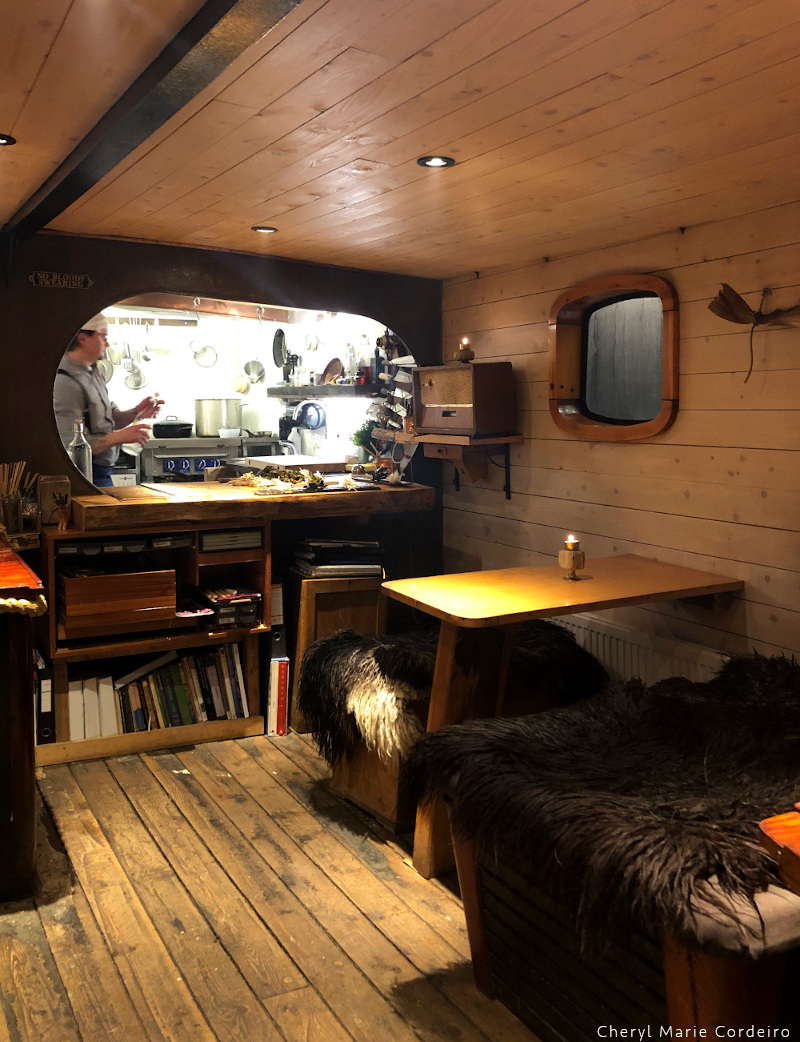 The pristine interiors and the open kitchen, with 1950s Rhythm and Blues vibes streaming from the vintage wooden box radio isolate. 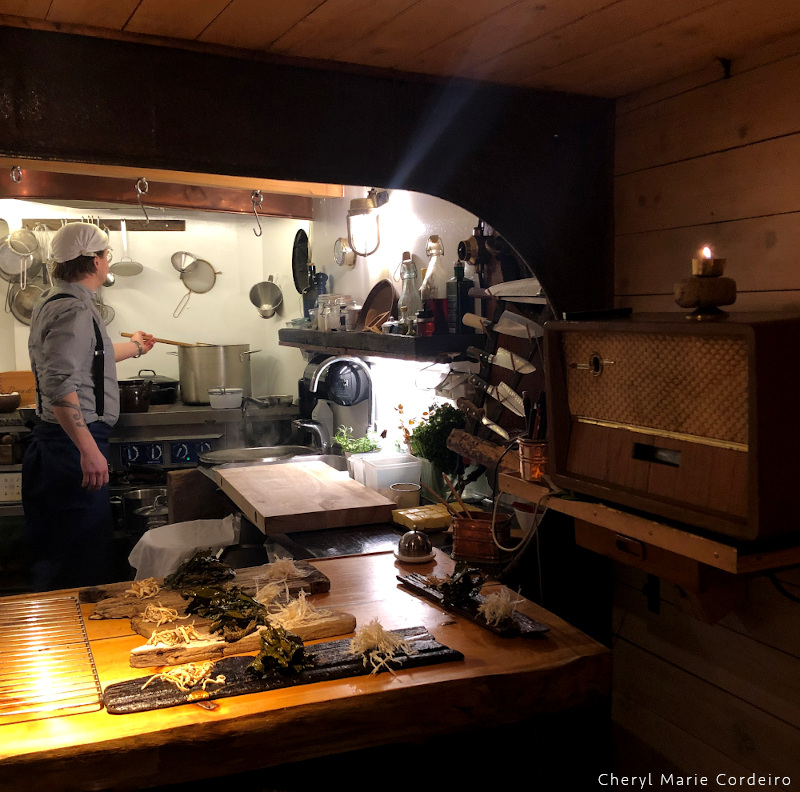 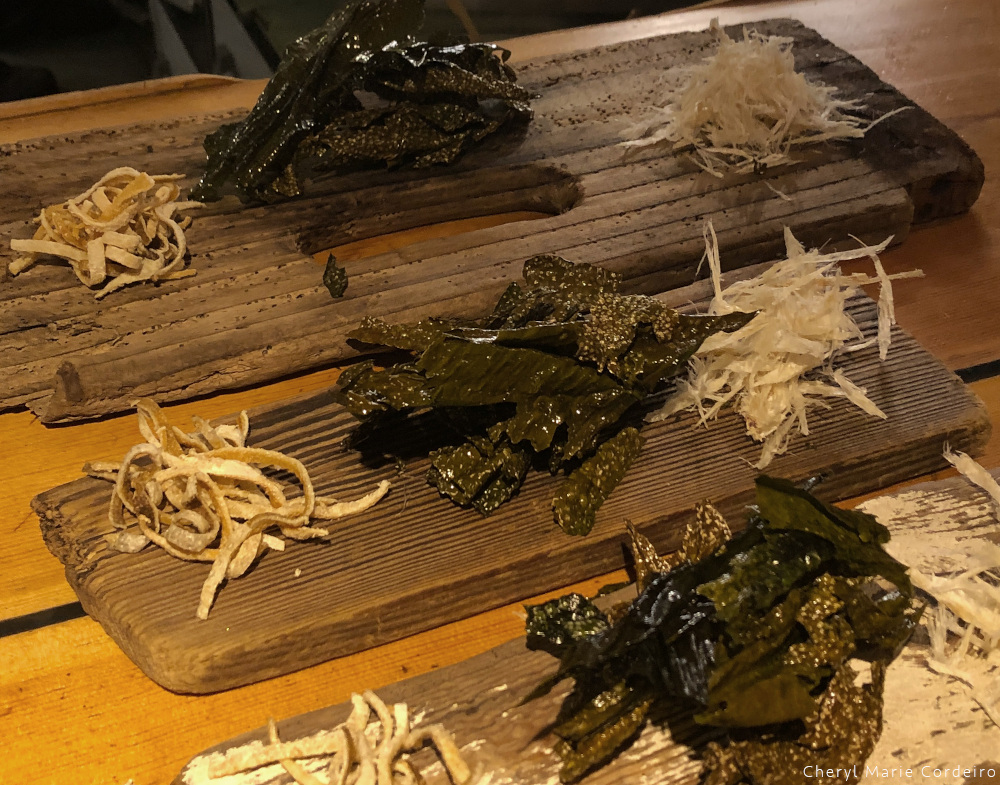 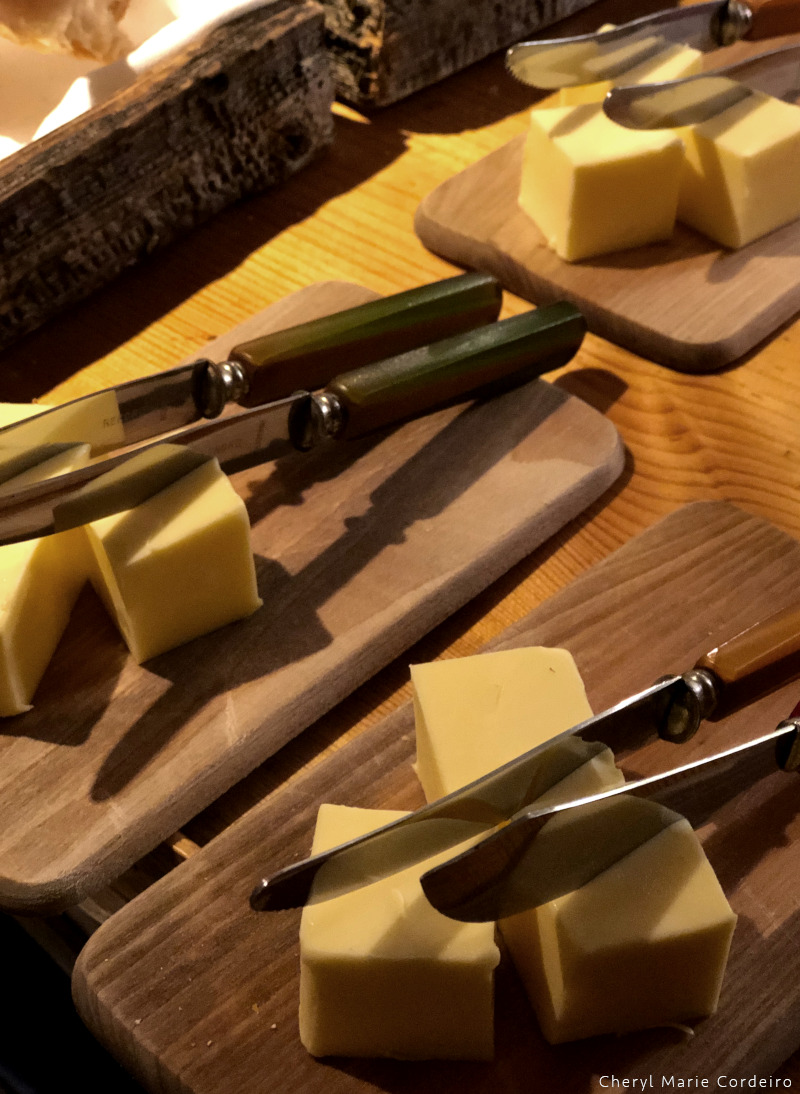 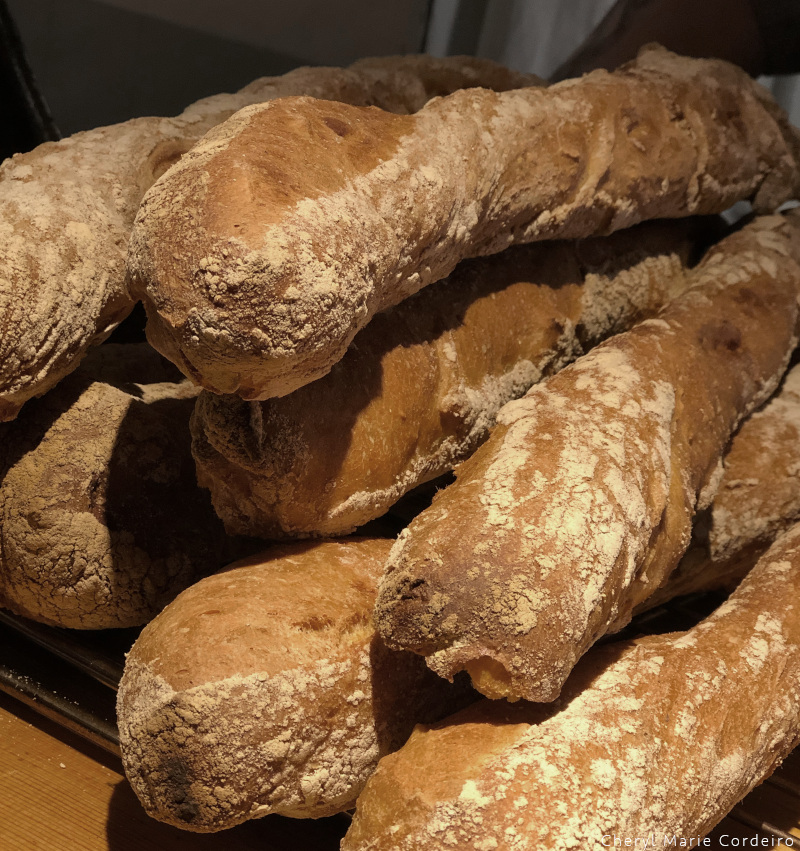 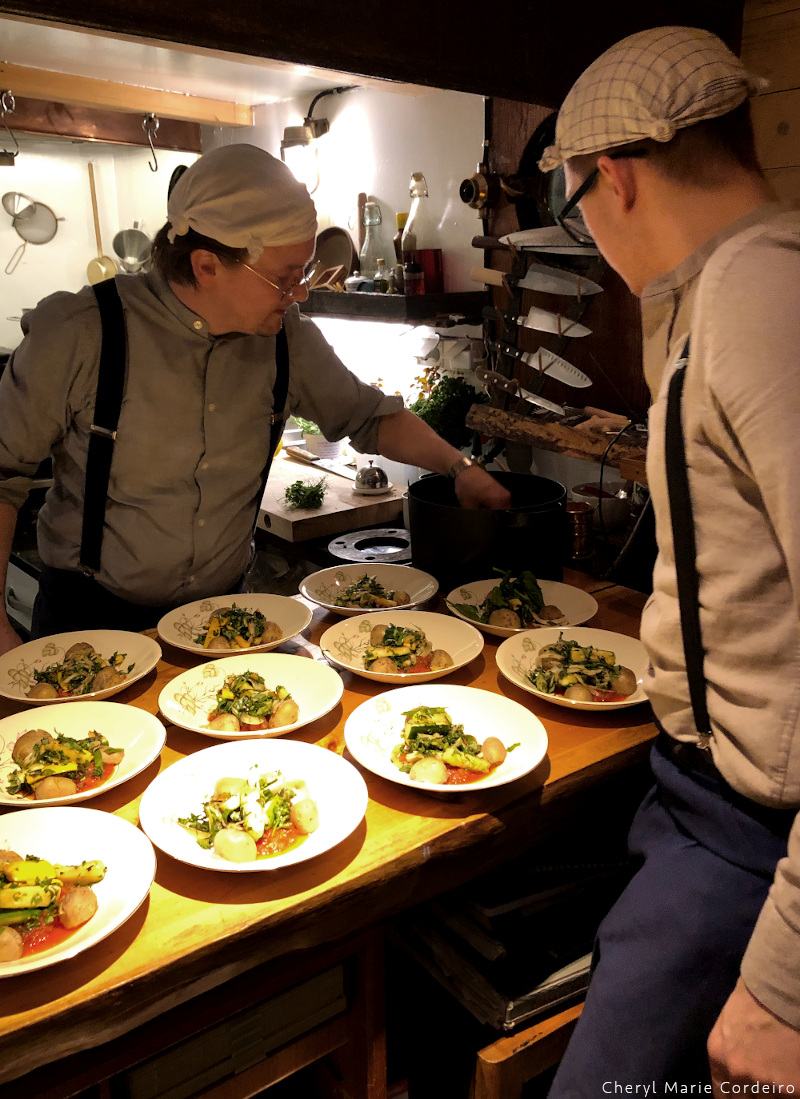 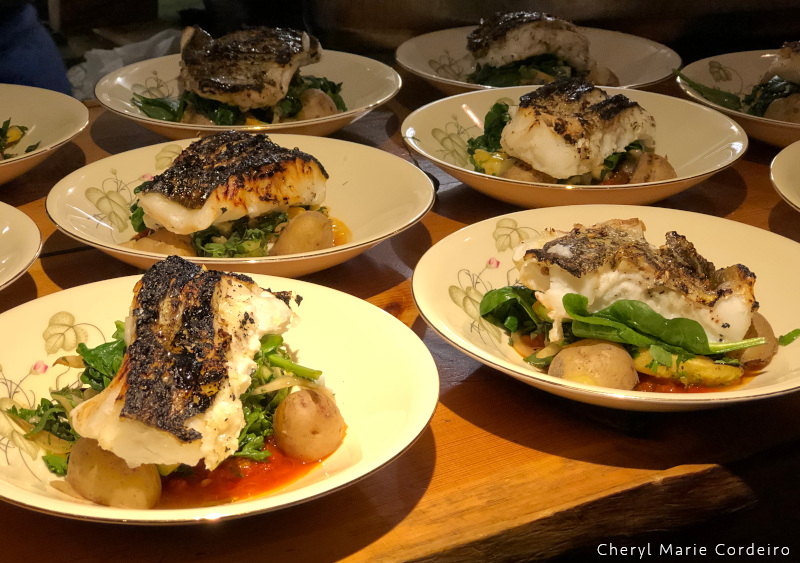 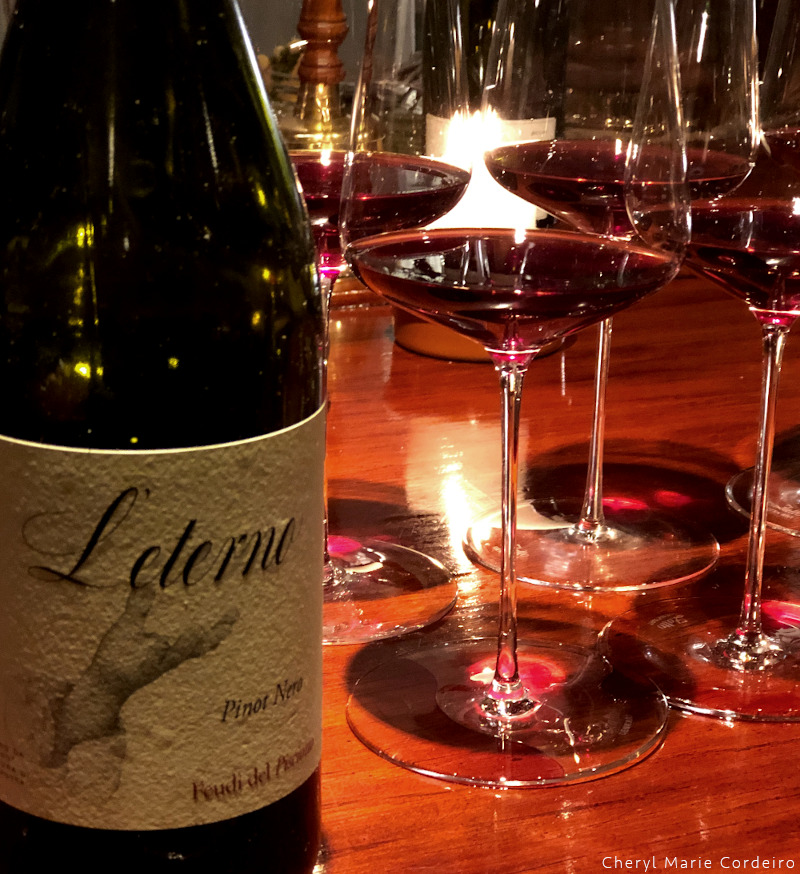 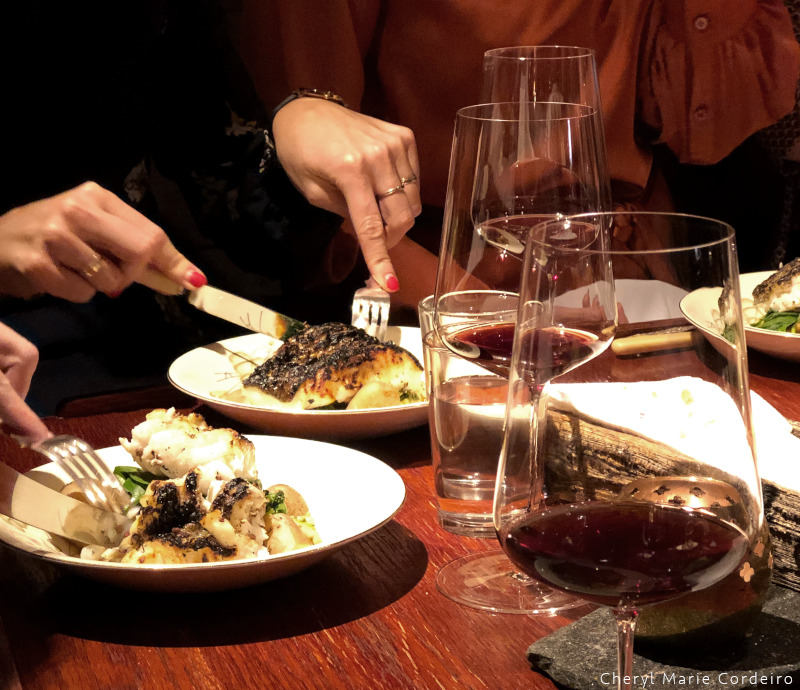 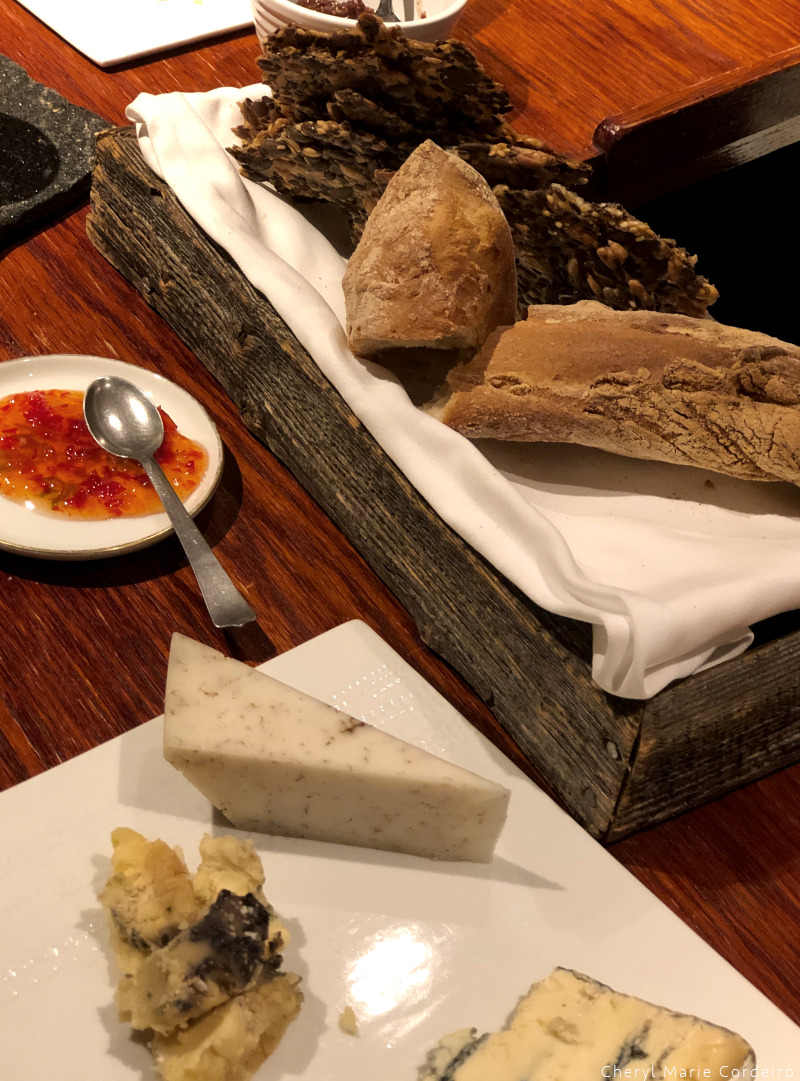 A cheese platter for dessert consisting of a very mature Stilton, an artisan Norwegian produced blue cheese from a small farm located in mid-Norway, and a goat cheese infused with truffle seaweed. The cheeses were served with sides of lingonberry jam, sweet chili and fig jam.

Standing in the aft of the M/S Bjørnvåg, the harbour view by night. 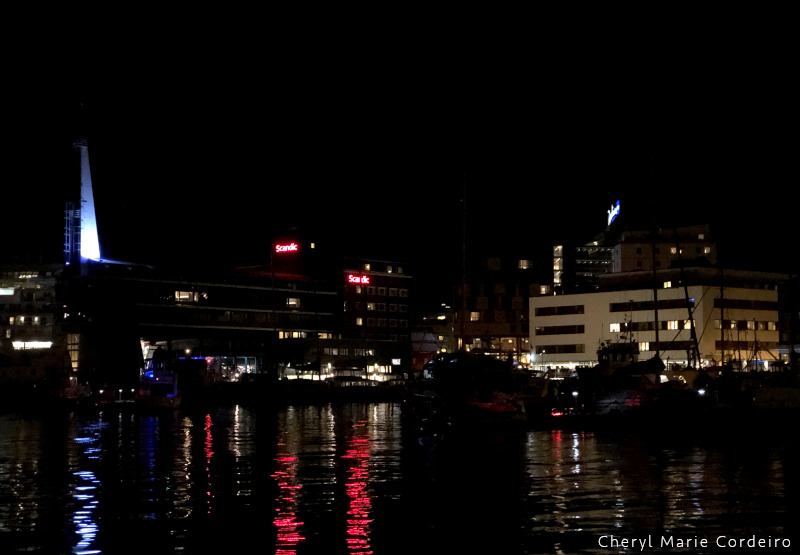 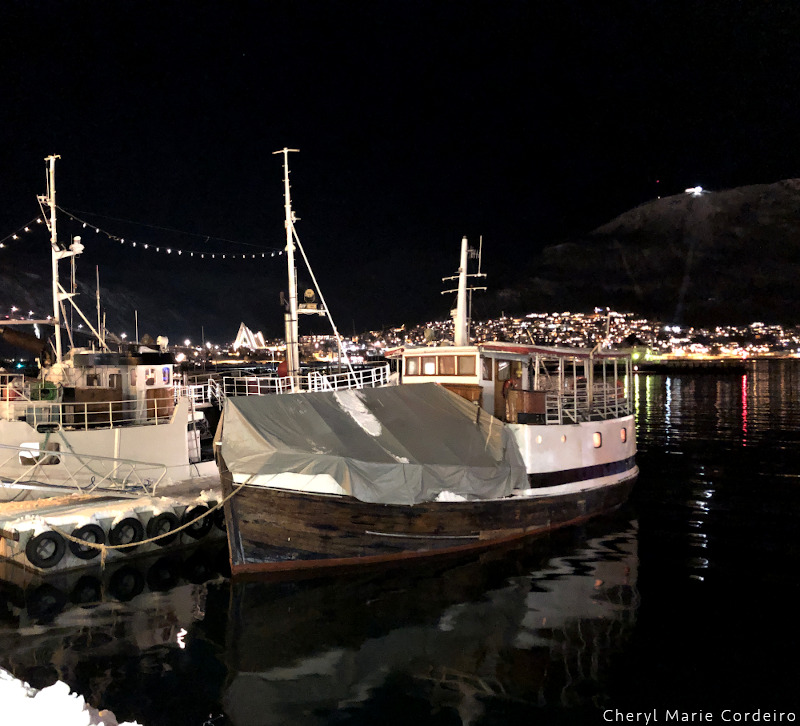 Lovingly wrapped up in a winter´s tarpauline, the M/S Bjørnvåg.