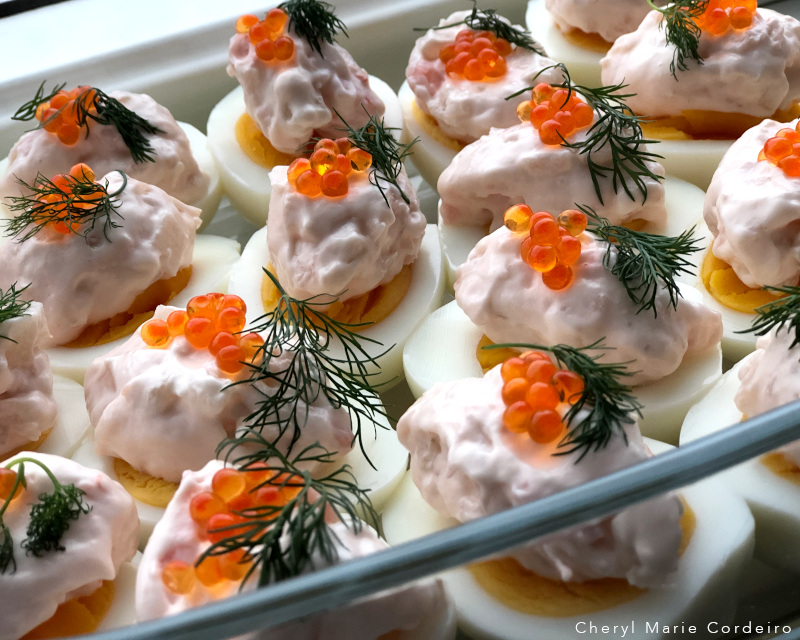 One of my favourite appetizers is the Swedish style egg halves. I love the festive and luxurious look of them sitting polite and snug on the plate, patiently waiting for you to pick them up and savour them. They are no doubt, a staple at the Swedish julbord (Christmas table), where restaurants and homes will each have their favourite versions.

What I particularly enjoy about making egg halves is that you can get fairly creative with the topping to the egg halves. Egg halves can be topped with creamy tuna salad, thin slices of salmon, whole peeled shrimp, slices of anchovies and complemented with radish, herbs and variations of caviar. In this instance, I used a Swedish shrimp salad called skagenröra which is a mixture of shrimp, dill, pepparrot, mayonnaise and crème fraîche. I´m not particularly a fan of dill, which seems to be a generously used ingredient to almost everything seafood, so that was left out of the skagenröra mixture, but placed on top of the egg halves. The caviar used here is trout roe.

It takes a little time, but all that is to do once you have your boiled eggs cut in half, and your skagenröra, is to assemble and serve.