Stirred, not shaken, in Monte Carlo 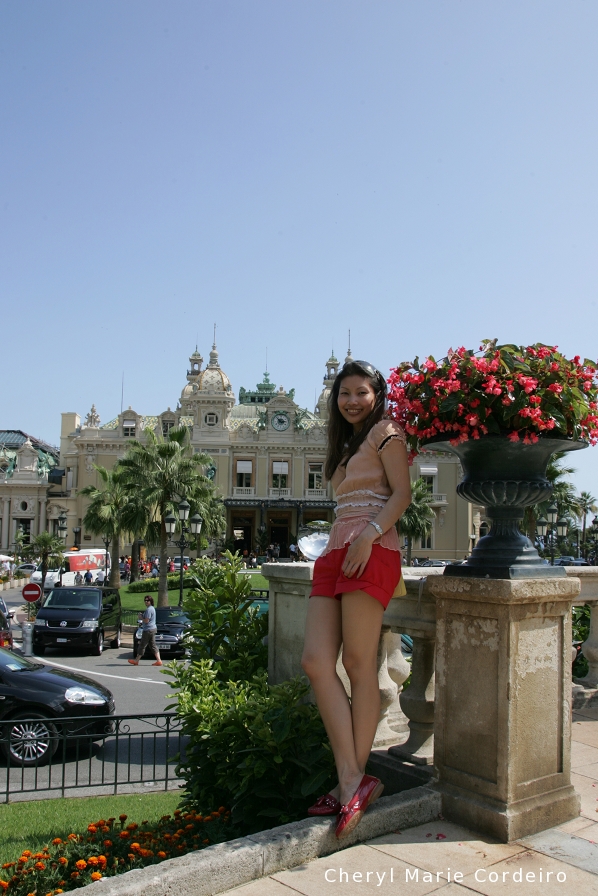 The kingdom of Monaco is stunningly famous despite its modest land area. Only 800 meters by 4.8 km (0.5 x 3 miles) it is the second smallest country in the world. The only state even smaller is the Vatican inside Rome. As such, you can walk clean through the country of Monaco almost without noticing that you’ve entered or left it. The country is however, fantastically scenic as it clings to the rocky, sometimes vertical slopes of the coast of the Mediterranean sea. One fifth of the entire city-state of Monaco is reclaimed from the sea and the main feature of this place is a very large harbour where the exceedingly rich who live here have their luxury yachts. 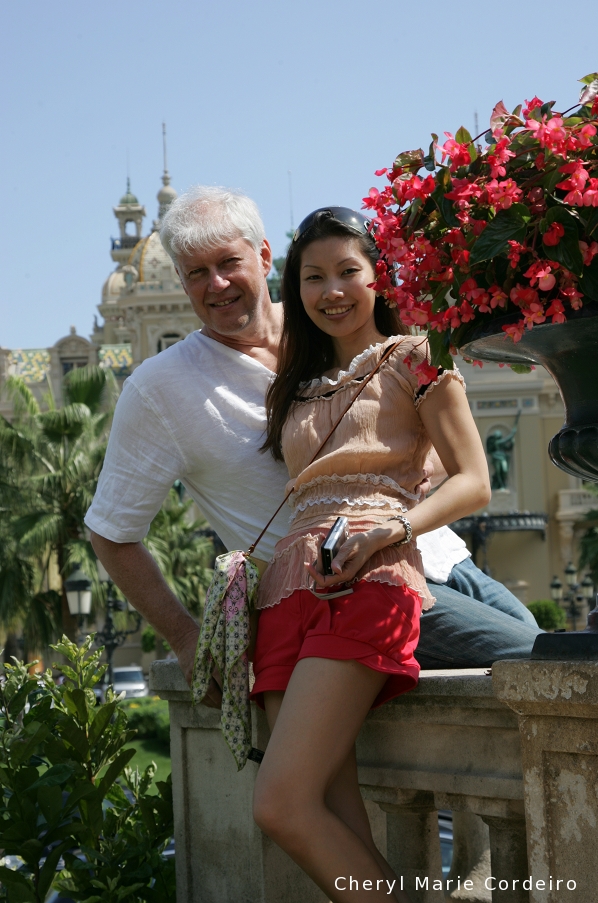 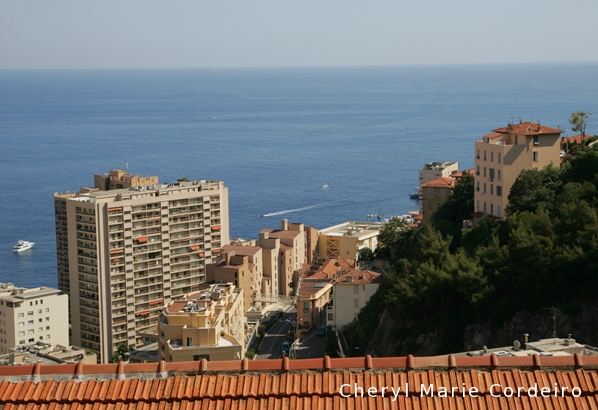 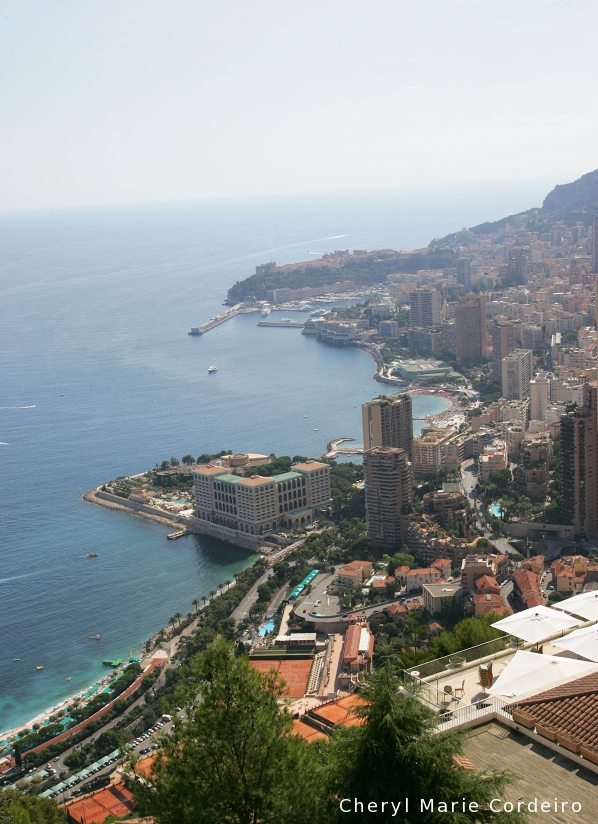 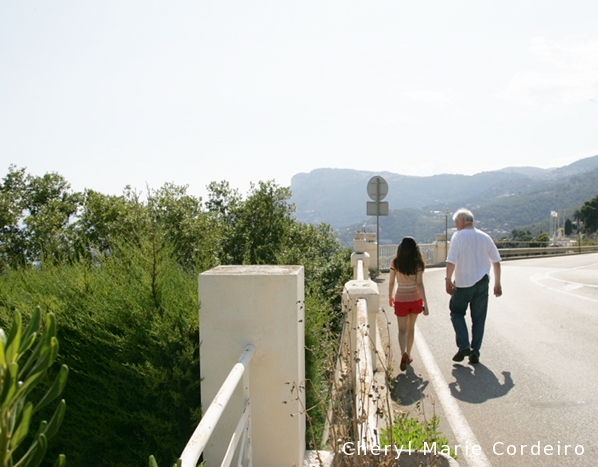 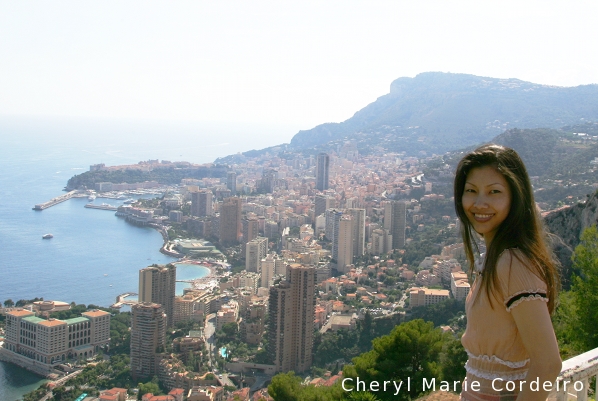 A view of more or less the entire Monaco looking absolutely inviting from this vantage point.

Visiting Monaco lent me three associations to it:

The Royal Family of Monaco
First, the troubled and somewhat tragic saga of the Royal family with Prince Rainier marrying the American actress Grace Kelly. They met in 1955 in nearby Cannes when Grace Kelly was heading the American delegation to the Cannes Film Festival. She agreed to have her photograph taken with the Prince and thereafter she visited the Prince’s gardens and his small zoo. They met again about 6 months later in America and got married already in 1956.

The romance between them got its tragic end when in 1982, Princess Grace died in a car accident. She was driving her Rover with her daughter Princess Stephanie when it veered off a mountainside. Princess Grace was pulled from the wreck alive but never regained consciousness before passing on the next day. Prince Rainier never remarried.

The news media’s fascination with Monaco continues until today with the Royal couple’s three children in their romances, troubles and scandals: Princess Caroline born in 1957, followed by Prince Albert II in 1958, and Princess Stephanie in 1965. 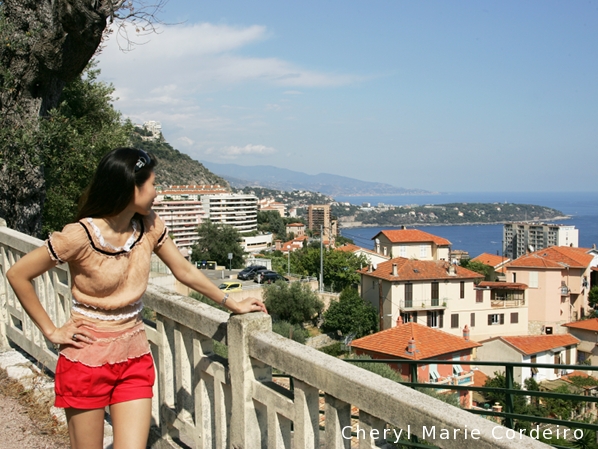 A view of the rooftops of houses in Monaco, most with swimming pools even though the beach is not more than 500m away.

The second association with Monaco for me, is the annual Formula 1 car race held here. Walking around, I find it terribly difficult to imagine anything like a car race along Monaco’s unbelievably narrow and winding roads that wrap themselves around the mountain sides, but obviously, racing here is possible and it has been so since the late 19th century. 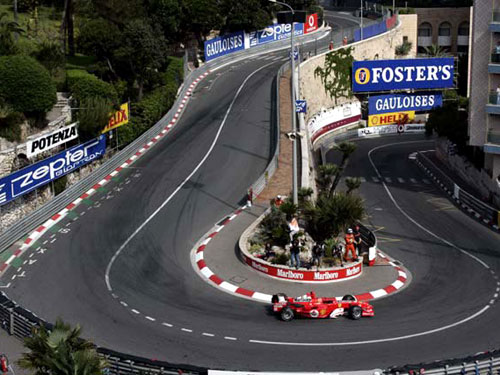 The third association is the Grand Casino de Monte Carlo which sits majestically in the middle of this kingdom, near the major harbour and next to the Royal Palace itself. 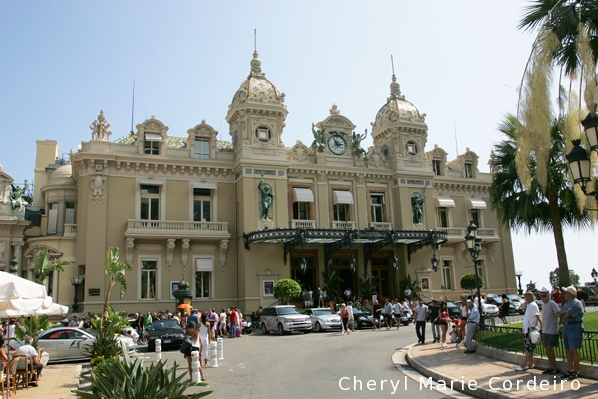 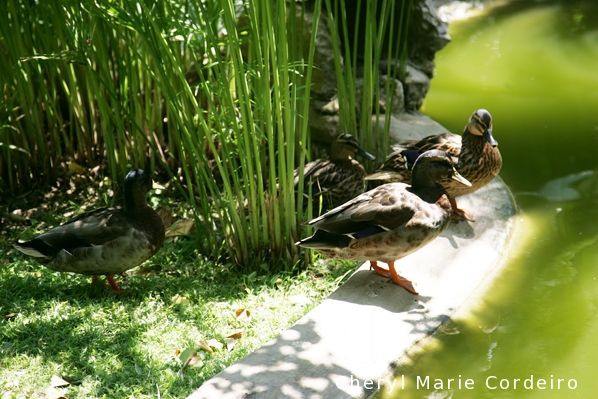 A cozy view of the garden near Le Grand Casino.

The immediate impression of the Casino building itself is something out of an opera and it was Charles Garnier who designed this Casino who also created Le Opera Garnier in Paris. And while the Opera Garnier in Paris is far more elegant in design and fixtures, Le Grand Casino is nonetheless reminiscent of the Parisian Opera house, though coarser in its gilded interiors and large chandeliers. Included in Le Grand Casino is the Grand Théâtre de Monte Carlo, which is Monaco’s main opera and ballet house. 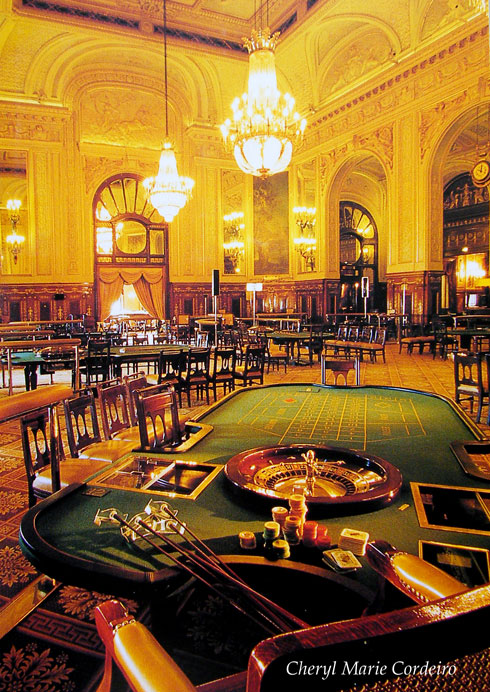 The main hall of the Grand Casino de Monte Carlo.
Picture courtesy of the Casino.

The Grand Casino de Monte Carlo is also, at least daytime, not too fussy about dress codes, which was another surprise to me since I expected at least a White Tie dress code for guests of the house. There were no problems for me to enter wearing red tulip shorts and a very casual Marc Jacobs top. This is perhaps a necessary adaption to the reality of things but it was indeed a tad disappointing. It would be fantastically exclusive and romantic to dress up for an evening at the casino and a late night dinner with champagne while counting the winnings…or not.

This casino is also intricately related to one of the most famous phrases of the whole movie industry – “One dry Martini, please. Shaken, not stirred”, as James Bond would have it. And it was absolutely on the must-do list, to check this out in person! 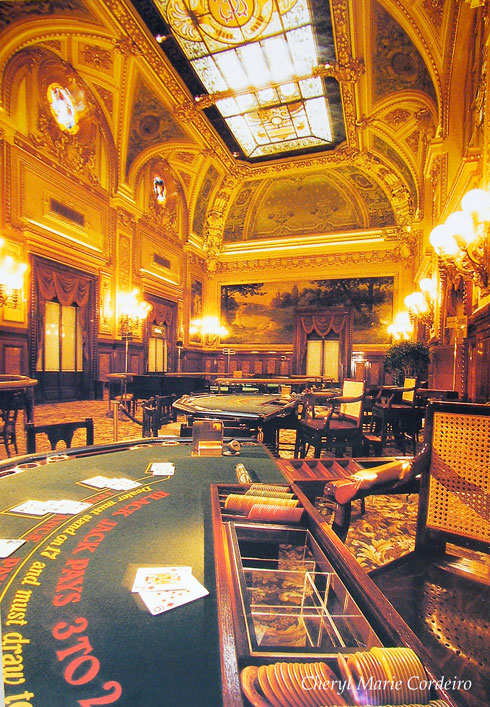 A reality check on the suave and sophisticated James Bond entries is served immediately inside the door – there is no way one could simply, dashingly walk into the casino and help oneself to some gambling chips while impressing upon any other person, be that a sexily clad woman or a handsome man.

Au contraire, as a guest you are expected to first check in your bags, your Walther PPKs, spy cameras, poison pens, scuba diving gear and other accessories in the wardrobe. Then there is a 10 Euro entrance fee you’ll need to queue to pay, plus a need to show your passport to prove that you are not a citizen of Monaco, since they strangely enough are not allowed to visit the casino. 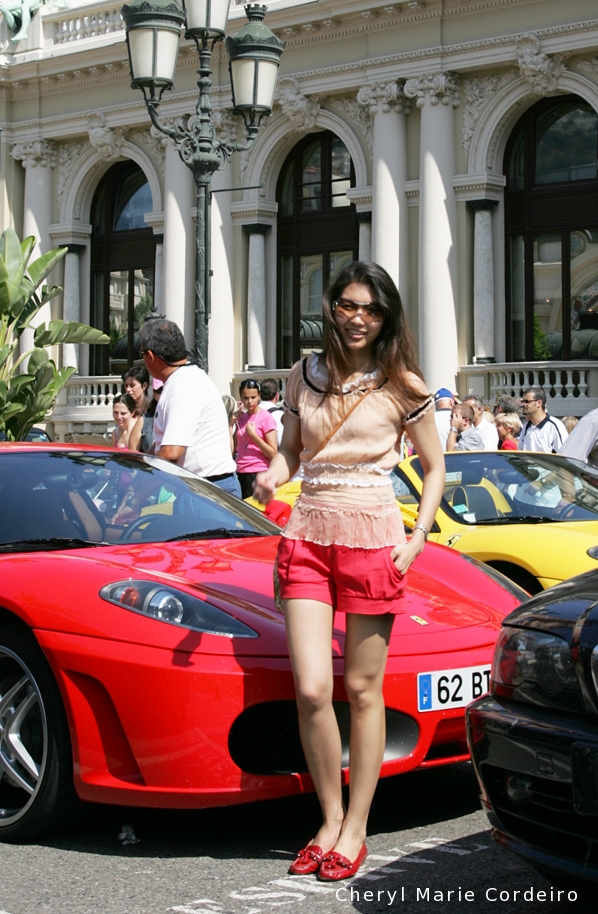 From a James Bond perspective the luxurious setting was exact. Sports cars as these Ferraris are always in vogue along the French Riviera and these debonair units were properly parked in the Reserved Lots outside of the Casino.

Originally the first ever original “James Bond” Dry Martini was ordered in the book “Casino Royale” in 1953, written by Ian Fleming. Going back to the source, the original line in the book was ‘A dry martini,’ he said. ‘One. In a deep champagne goblet’. Then James Bond goes on and orders a drink of his own invention that eventually was called “Vesper” after the female agent and his love interest in the novel.

The Vesper was then actually a gin and vodka drink with a dash of a French bitter called Kina Lillet with a distinct taste of kinin, shaken and with a large thin slice of lemon peel. What complicates matters is that the original Kina Lillet was discontinued in 1986 and replaced by a sweet white wine concoction Lillet Blanc, similar in flavour to sauterne wines, and not the slightest bitter, so the big question was, how now would the Monte Carlo casino bar deal with this?

The only way to quell our curiosity was to walk up to the bar in Le Grand Casino and order a Dry Martini to see what was served. It took superhuman self control to refrain from adding “shaken, not stirred” when ordering. Managing that, I however felt it necessary to ask the bartender if this was really the original casino and bar featured in the James Bond novel and following that, the movie. And yes, it was.

Though happy to confirm the casino, the bartender then confided that his bar (which was closer to the entrance) was not really the same as the one featured in the movie. The real one, he said, was located in one of the private rooms of the Casino, on the inside and to the right and unfortunately only open by appointment or to especially invited guests.

As for the drink, what I got was a very normal dry Martini based on Gordon’s Gin, Vermouth, stirred with ice in a high drink tumbler and served in an ordinary Martini glass, with olives. I stared in disbelief and disappointment. 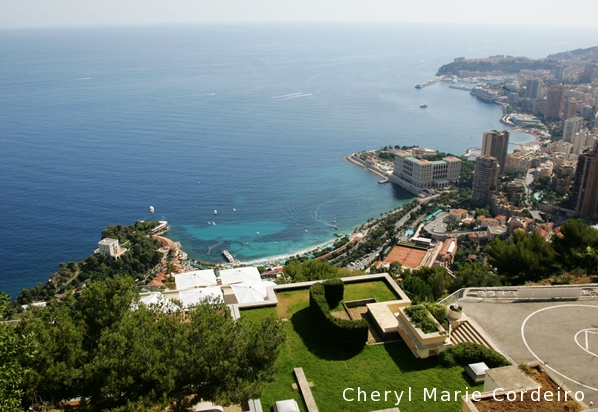 The entire country of Monaco from the roadside – in France – leading towards Nice. In the background a helicopter platform that would be used to bring guests up and down to the beach maybe 500 meters below.

Monaco and Monte Carlo especially, is a treasure to have in experience. After a very nice stay and having explored the winding roads and some of the exclusive estates of Monaco, I figured that when it comes to spending money the crowd around here really know how to do it. Quick, lots and with style.

One thought on “Stirred, not shaken, in Monte Carlo”