Visiting the Rothschild vineyards in Bordeaux, 2008 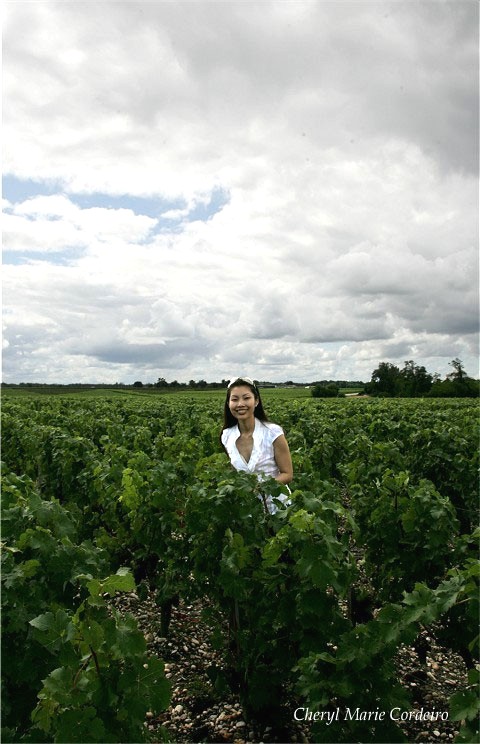 The region of Bordeaux was legendary to me. I had heard of it long before I ever thought I would visit it. To me, Bordeaux was superior wines, it’s romantically undulating landscapes that the grapevines so needed to grow, the warm weather and the rustic lifestyle of grape harvesting and wine making.

Even though my knowledge of wines is limited to be able to recognize a good wine when I am served one, I expected to hit every single chateau in sight for some wine tasting, inspect all barrels of wines in different stages of aging and come away with much greater knowledge than before I set foot here.

It was such a disappointment then, that the day we had set out to explore Bordeaux, was a French national holiday weekend and all chateaus were closed!

With a sunken heart, we decided to travel around some and take a look at the vineyards and chateaus anyway, targeting one of our favourites, the Rothschild’s vineyards in the Médoc area just northwest of Bordeaux. Since the history of the Rothschild family, as well as the history of the vineyard and the wines all have approached mythical proportions, we decided this was worth doing even if there would be no one on grounds to meet. 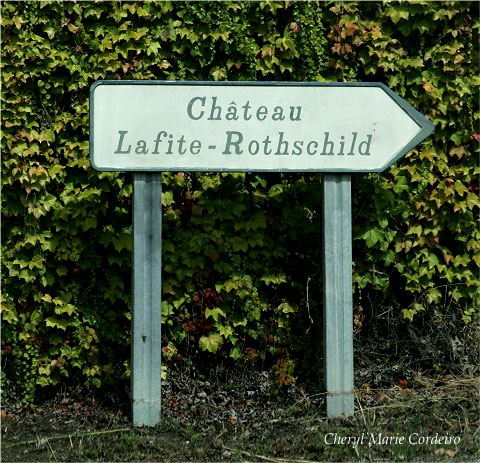 A signpost leading the way to maybe the most famous of all vineyards in Bordeaux. The vineyards and chateaus are generally easy to find, following the signs.

The roads were tiny and winding slightly up and slightly down. They were also bare of any vehicles or crowds due to the holiday.

We had plenty of time to search for Baron Philippe de Rothschild’s chateau, stopping at a quaint store that sold locally bottled wines to ask for directions. The open store on the empty street was rather inviting, blending old wine box labels and souvenirs with some respectable wines, and we found ourselves having gotten into our very first wine tasting session at this cozy store. 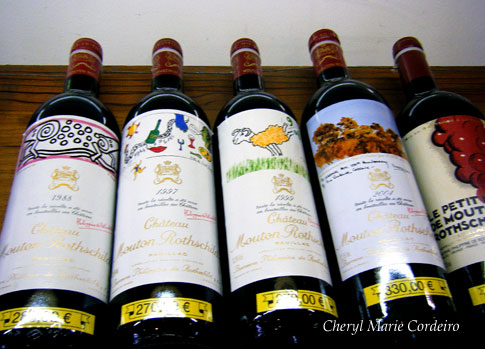 Some wines from Chàteau Mouton Rothschild sold at the local wine shop in Pauillac.

After wrapping up a few boxes of wine that we purchased, the lady told that Rothschild’s chateau and vineyard that we were looking for were not more than 20 minutes away, straight ahead. 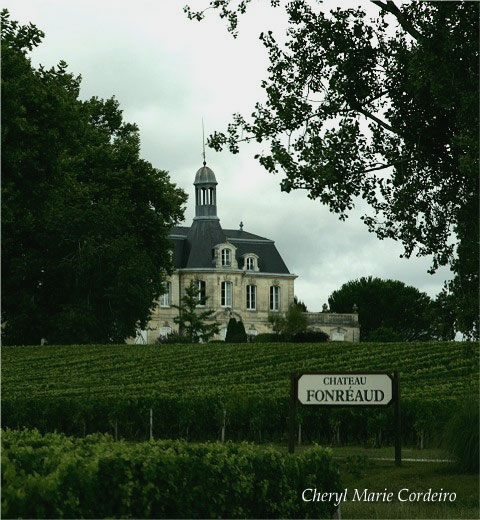 Château de Fonréaud, one of the many chateaus and vineyards found in Bordeaux

There were countless other vineyards that we passed along the way, the grapevines neatly grown in exacting rows. When we reached Baron Philippe de Rothschild’s vineyard, we at once knew that the place was very well cared for. All grapevines were of similar height and size and planted in mathematically precise rows. The rows continued for miles on end.

The famous gravel that studded the precious soil were littered with small bunches of dried grapes that were pruned to give space for the ones left to grow even better.

What made a greater impression was its absolute silence and serenity in the miles and miles of light green grapevines. Green vines against a clear blue sky, brown grey pebbles mixed in the coarse gravel you can hear your feet softly crunching under your feet as you walk the vineyard – it was all too unbelievably exquisite to describe. Pictures cannot show the beauty of this place and I all at once became relieved that it was after all, a national holiday weekend, because we had the entire place to ourselves! 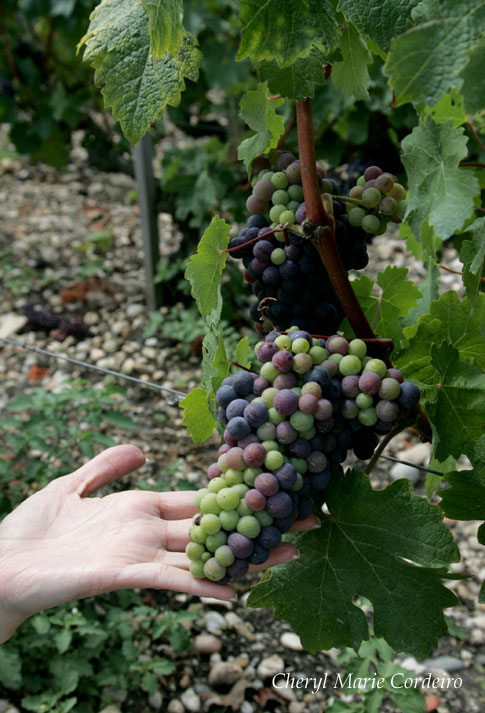 A bunch of grapes, exotically mixed in greens and purples.

Every single bunch of grapes was unique in colour combination, some all green, some all purple and my favourites were the bunches with mixed purples and greens! I gave in to the temptation to try them and they tasted bitter-sour to the palette, remarkably similar to large unripened blue-berries and perfect for wine making! 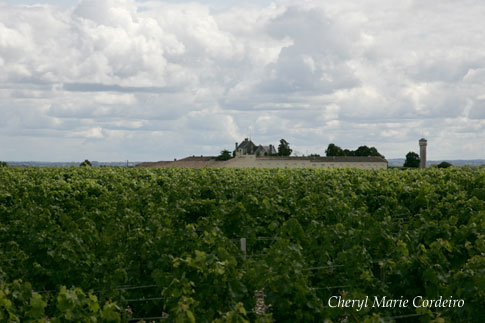 A view of Château Mouton Rothschild from afar, surrounded by what seemed like miles of grapevines. 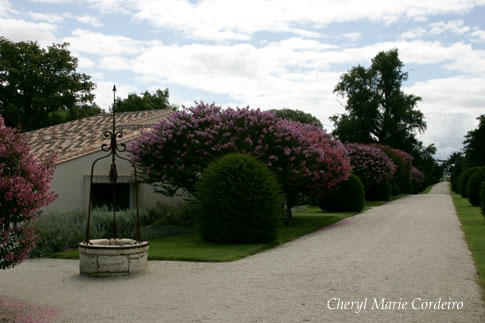 It wasn’t only the vineyards that were kept in pristine condition, but the Chateau’s grounds were closely pruned, with beautiful flowering trees planted neatly in a row, along its gravelled entrance.

The Mouton Rothschild chateau was most certainly closed but we explored the grounds in good time, basking in the warm summer sun and the vast stretches of cultivated land. The smell was sunshine and fresh grapes! We noticed that the vineyard had at least as many as five variety of grapes growing, to be used in the blends that makes up these famous wines.

Walking between the ripening bunches of grapes, I can perfectly understand how some have come to embrace wine making as a philosophy and way of life with such great love for wines. Wines that tell its story of its roots, the soils from which it grew – melon, chocolate, berries and more in its flavours – all from the ground and its environment. Wines tell if they were made with love. And love, is what I felt standing in the middle of Rothschild’s vineyard, on a warm summer’s national holiday in Bordeaux. 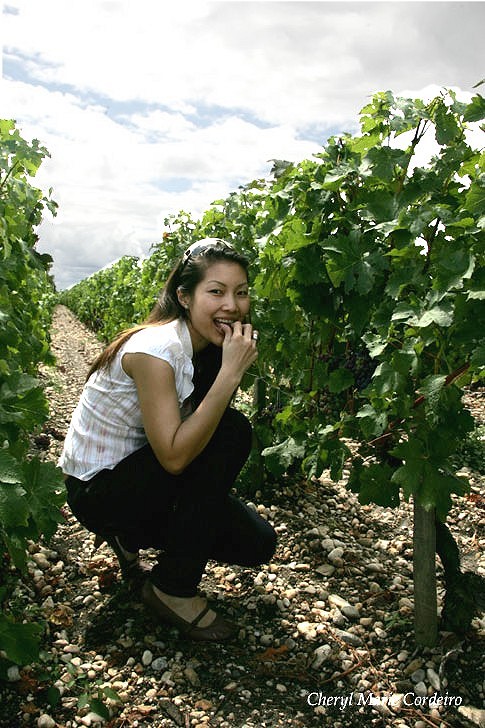 The grapes were fully flavoured, surprisingly similar to blue berries, and grew in tight bunches.

I hope the good Baronessa will not mind there are a few grapes missing from somewhere in the middle of the fields. They were blessed with sun and I am sure 2008 will be a great year. You can’t really fail considering the precision, care and effort that all areas of this chateau was displaying. 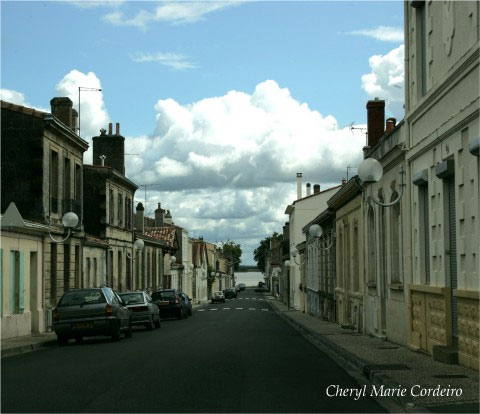 A serene street in Village de Pauillac in the center of Médoc, about 45 km northwest of Bordeaux. Pauillac is surrounded by around fifteen vineyards and estates, Château Mouton Rothschild being one of them.

Pauillac displays a certain calmness, not bothering much with city life. It was here, along the riverside of the Garonne that we stopped for a meal. 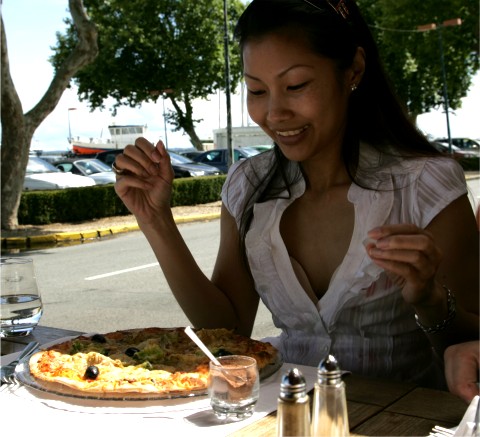 While France is often thought of today as the birthplace of gourmet cooking, they have in fact, during the medieval times inherited much of their sophisticated cooking techniques from Italy. Notably, when at least two members of the Medici family of Florence were married into the Royal Family of France, bringing along chefs, recipes and inspirations. Before the Medicis, Charles VIII (1483-1498) of France, failing to seize the kingdom of Naples, brought back to the Loire Valley, Italian gardeners as he wanted to recreate in the Loire Valley what he had seen in Italy, the cauliflowers, spinach, artichokes and even orange trees. Thus introducing in France, several vegetables that were grown in Italy but hereto, not grown in France. The orange trees were grown over-optimistically in the colder open air and thus not surprisingly, never bore fruit.

Pizza, as served in this particular French restaurant, is a much later import but I think they managed very well with this dish. However, the many available seafood dishes at this restaurant looked fabulous! 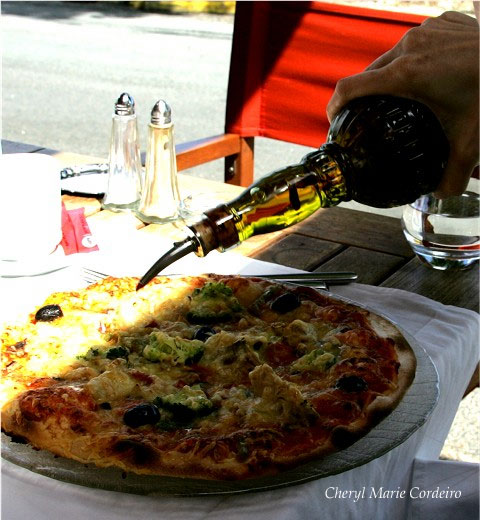 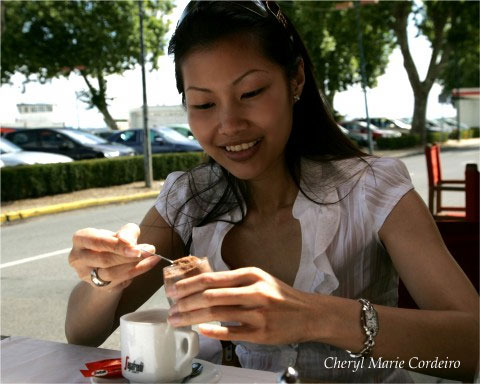 To my delight, the restaurant was generous with their cocoa powder and you can have your cup of hot chocolate mixed to your very liking in taste at the Village de Pauillac, along the Garonne.

Situated at the riverside of the Garonne, there were quite a number of restaurants. Families and friends were seated everywhere and it was easy to see how the discussions of every table was somehow circulating around the wines that were accompanying the meals. Years, makers, grapes, blends and how each and every one fitted to the various dishes, was expertly commented on and one could even see how generations of friendly disagreement between neighbouring wine yards on the rights and wrongs of wine making and tending of the grapes, good or bad luck with sun and rain, were brought to bear once again.

One thought on “Visiting the Rothschild vineyards in Bordeaux, 2008”