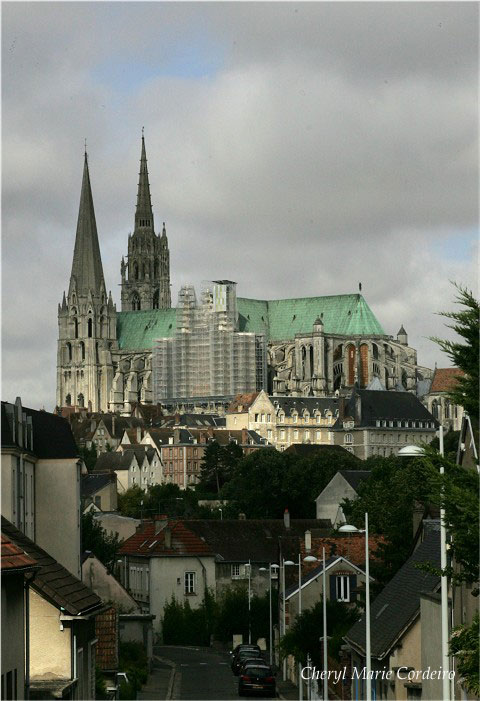 The heart of Chartres, the Notre Dame Chartres Cathedral looms impressively over the town and is visible from miles along the plains of Beauce.

The entire landscape around the city of Chartres about 45 km south of Paris, is mostly flat agrarian countryside. Mile after mile of fertile soil made the foundation of wealth that went into the building of this Cathedral. From a distance, the Cathédrale Notre-Dame de Chartres seems to float among the clouds. This impossibly large structure strikes you as unlikely as Noah’s ark, just stranded on the mountains of Ararat. 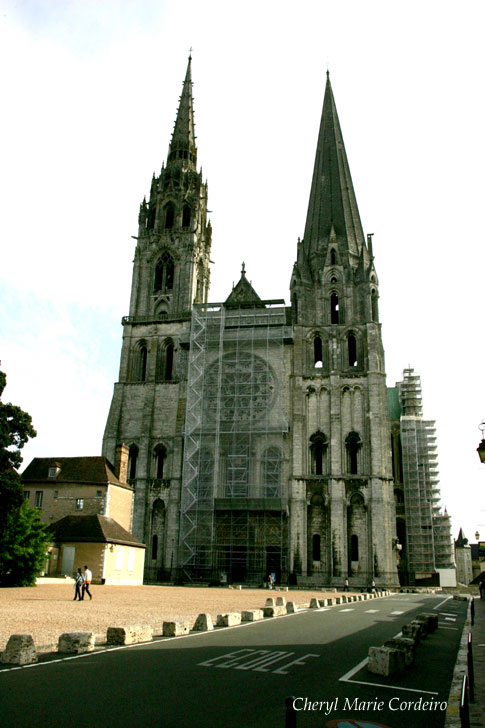 The west facade of the Notre Dame in Chartres, a magnificent piece of mid 12th century high Gothic architecture. Its famous Portail Royal, completed about 1155, is currently under restoration. In this picture, the right (south) tower is the original, older, from about 1150. The higher, left (north) tower was rebuilt in 1513 after a fire.

The medieval charm of Chartres envelopes you as a warm cloak even as you approach the small town. The river Eure that runs through the town provides it with a picturesque backdrop and one is immediately taken in by the timbered architecture of the houses that line the cobbled streets, making them look almost right out of a Brothers Grimm fairytale.

At the heart of this city is the massive and striking Notre Dame Cathedral in its Gothic glory. From afar, the looming structure seems to float on clouds. It is only upon drawing closer that you realize that it sits quite solidly, on a hilltop, previously known as The Mound.

For hundreds of years this city with its sacred hill top has been the focal point of this area. Both as a mercantile center and from 876, an important Christian pilgrimage stop, when it received a piece of fabric believed to have been the garment Mary wore when she gave birth to Jesus. Many miracles have been attributed to the cloth, which was once also stored in the cathedral’s crypt under the cathedral, probably having its origin in pre-Christian times. 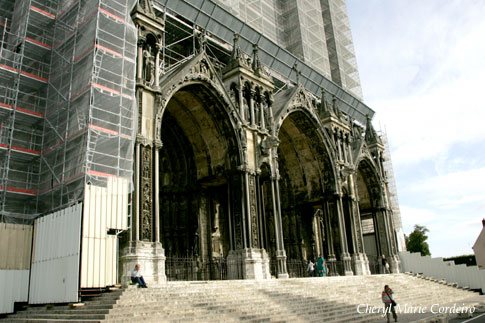 The steps leading up to the south entrance of the cathedral.

The Notre Dame Chartres looked impossibly large from a distance as I approached in a car, and it became only larger and more impossible as I stepped up to its southern entrance. 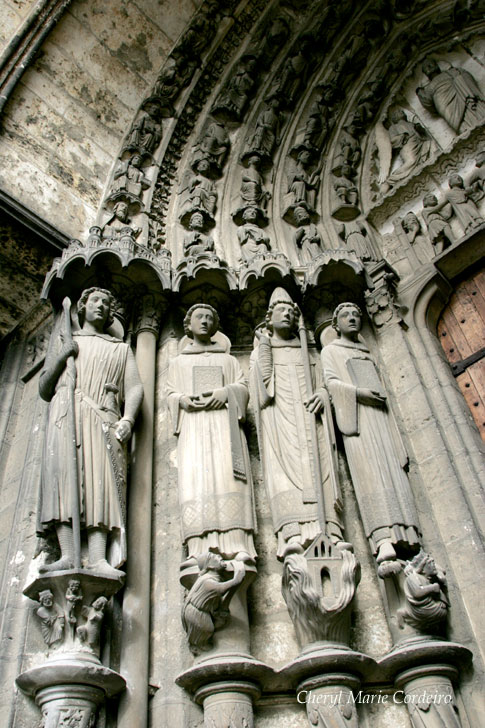 Sculptures at the entrance of the cathedral.

The structure is towering, even by modern standards, projecting more than 100 meters high, as if to touch the very heaven that gave it inspiration and meaning. What makes this building a bewilderment is that it was built more than 800 years ago.

Going up its main stairs and stepping through its entrance, the wooden door heavy and creaking, I felt as if traveling back in time. 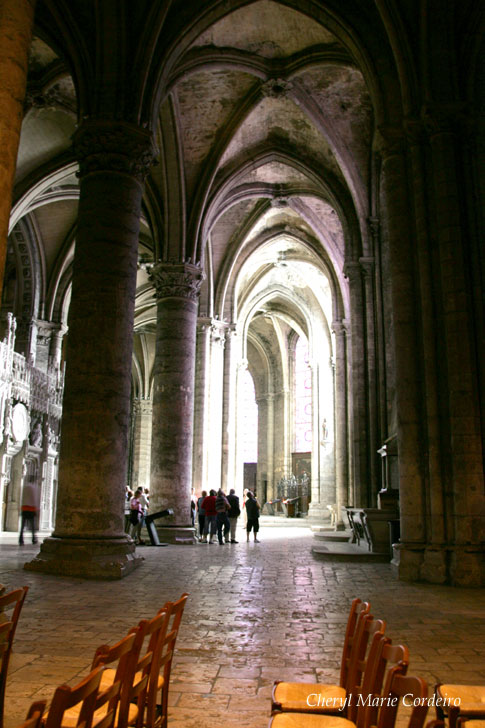 The interior of the cathedral, still, vast and silent, was cast in a contrasting glow of purple and orange.

When in Italy, it is Romanesque architecture that dominates the shapes and structures of its cathedrals. The cathedrals of Italy are mostly solidly walled, massive and heavy; their beauty concentrated onto their exterior. The Gothic architecture in France however had a different philosophy, if not at the other end of the spectrum.

That God is Light and that divine light should inspire people is what Abbot Sugar had in mind when building Gothic churches in France, beginning with St-Denis in Paris. The idea is that people would not only see the churches from afar but they would stand in it and worship God too. And when standing in the church they should too, be inspired by God in His manifestation as Light; as Light, being neither solid nor with form, is the ethereal material on earth that can connect us to that which is spiritual.

The Notre Dame Chartres is not only illusory light in structure but it had its interior lit to the core so that people would be inspired by the divine light streaming into the church. It is light, that bursts into a prism of beautiful colours, that should in turn kindle a fire in our souls and encourage our beauty from within. 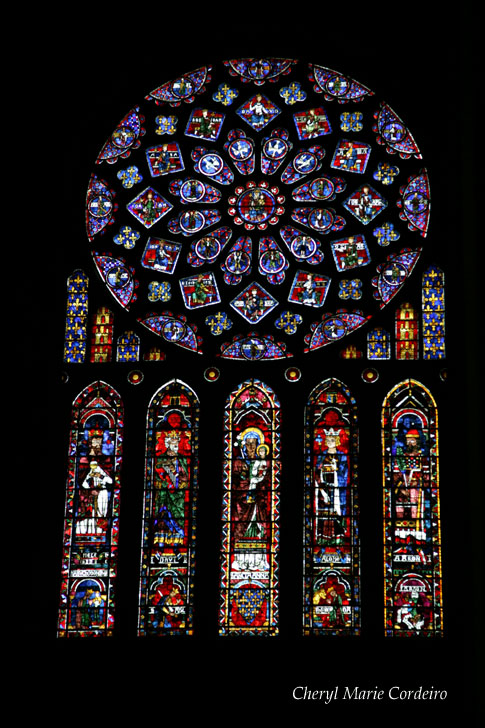 A stained glass rose window with five lancets of the north transept. This set of windows, called the Rose of France, is a tribute to the Virgin Mary, St. Anne and Blanche of Castille, was donated by Queen Blanche, wife of Louis VIII in 1230.

The filtering of light into the church was made possible in Gothic architecture by ingenuous engineering, where they literally turned the cathedrals inside out. Instead of using heavy walls for the structure, massive flying buttresses supports the structure from the outside leaving plenty of space for large windows. Inside, the walls of the interior is lined by thin columns, creating an illusion of incredible lightness, leaving the onlooker in awe of such a large structure being supported by such thin arcs and pillars. 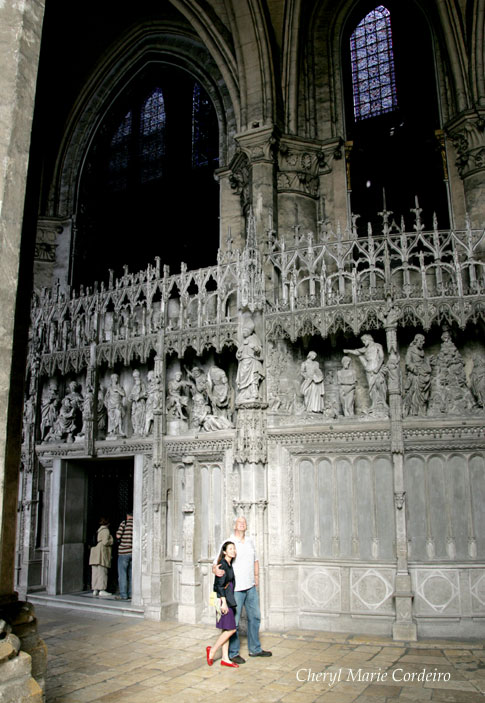 An intricately sculpted wall surrounds the choir. Preserved from the erosions of weather, this inner wall is a marvel to behold when walking around the ambulatory.

Most, if not all cathedrals around Europe possess in their architecture, stained glass windows in various Catholic symbolisms, but the ones found in this particular cathedral, of unknown architect, are simply breathtaking in symmetry and design! 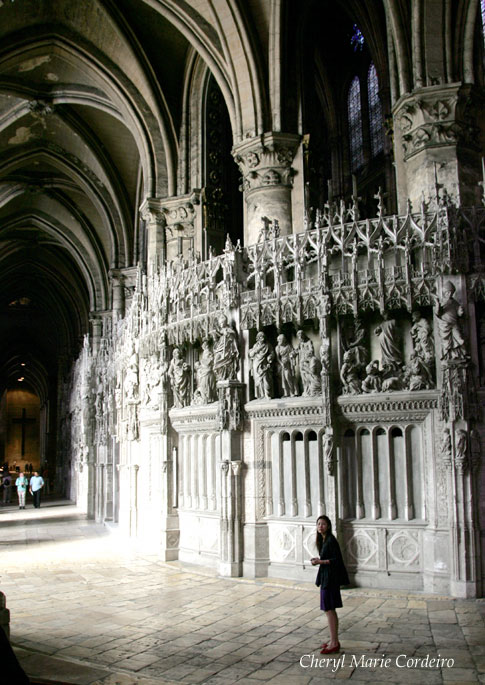 A fuller view of the wall around the choir. The structure is so massive that it felt for me, as if looking at a church within a church.

Apart from its Gothic architecture and its location on ancient holy grounds, this cathedral is well known for the possession of a single treasure: a piece of Middle Eastern cloth, the Sancta Camisia, believed to be the cloak worn by the Virgin Mary either at the time of arc angel Gabriel’s visit or at the birth of Christ. This holy relic was acquired by Charles the Bold, the grandson of Charlemagne from the Byzantine Empress Irene, during his trip to Jerusalem and has been scientifically confirmed to be of first century make.

The Sancta Camisia has survived several fires and it was its survival of the calamitous fire on June 10, 1194, in which the cathedral was devastatingly destroyed, that spurred the people of Chartres to build a new, even more glorious church in the honour of the Blessed Virgin.

While the miracle of the survival of the tunic had spurred thousands to re-build this impressive church, the Notre Dame to me, stands as testament to the adamantine strength of the human willpower and determination. We possess in us, a roborant current that can move mountains if we so wanted. 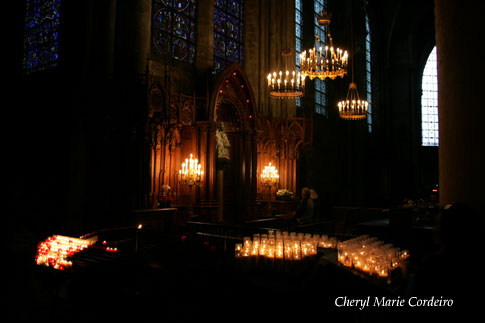 The ambiance of the cathedral is serenely silent and thoughtful, with the glow of candles in prayer surrounding its various stations.

When at the Notre Dame Chartres, be sure to explore carefully, the central nave of the church that exhibits a quintessential Platonic philosophy that characterized the ideology of the architects of Chartres – that what exists on earth is only a pale reflection of what exists beyond. Paved stones on the ground of the nave, all too often covered by standing tourists and rows of wooden chairs, trace an ancient pattern of a labyrinth, in the reflection of similar diameter, the stained glass circle on the wall.

This labyrinth, with its path twisting and turning to the center rose is a reflection of a pilgrim’s spiritual life, one that is never easy and not without troubles. Still, the pilgrim will in time, find his / her way home – a wonderful assurance to keep as you leave the cathedral. 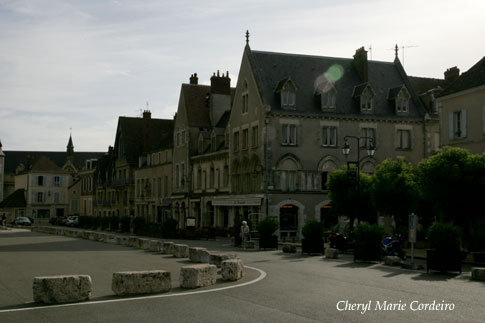 A row of shops across the main entrance of the Notre-Dame Chartres, where you can relax, have coffee and enjoy the view of the compounds of the cathedral.

Chartres is easily accessible from Paris, being an hour’s train ride away, perfect for an excursion over the day. For those visiting Chartres, you might wish to stroll down its heritage sites, the street of the Equeries in search of the Queen Bertha Stairway, made during the 16th century. This street is spectacular in their lanterns suspended on chains and it invites you to step back in time to glimpse at the medieval.

The oldest houses in Chartres can be found near the Cathedral at No. 29, rue Chantault. These date back to the 12th century, about the time the Notre Dame Cathedral was built. To know what types of ancient trade took place along these passages during the Middle Ages, simply look at their street names.

2 thoughts on “The mysterious ‘Notre Dame’ Cathedral in Chartres, France”