Being a great fan of both the durian, the royal fruit of fruits or the stinky fruit (depending on how you view it) and ice-cream, what would be more natural than combining the two to make durian ice-cream? 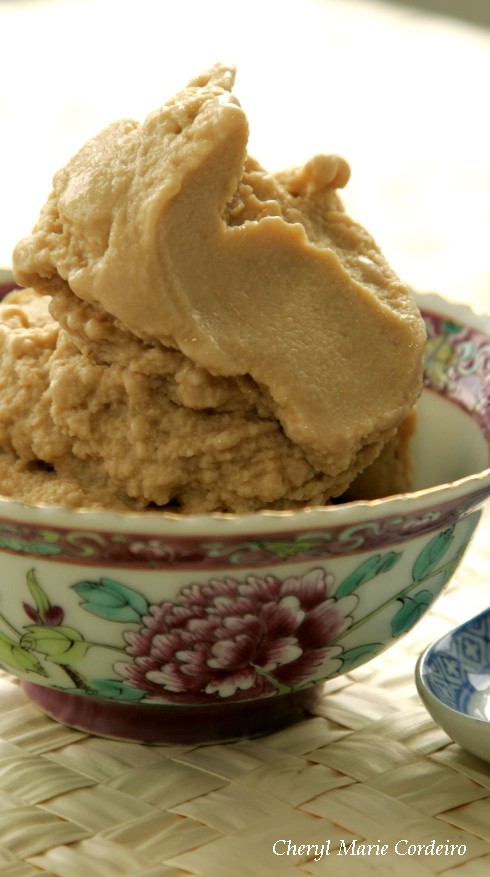 Durian ice-cream made with gula Melaka and coconut milk, an old Nonya recipe from Singapore. Served in a Straits Chinese porcelain bowl from the 1920s. This bowl is decorated with peony flowers, a ‘feng’ bird (phoenix) and Buddhist emblems. All very traditional, the emblems also reflected in the textiles they produce.
Photo © J E Nilsson and C M Cordeiro-Nilsson for CMC 2010

Moving between countries as I do, I often reflect upon the differences and similarities between Singapore and Sweden where I find Sweden a solid structure that is not likely to change very much, ever, and where everyone is “pretty much ok” or lagom, while Singapore is a nation whose wealth has come more recently, where education really pays in terms of income, and the large proportion of citizens who are well off, are bathing in new money in a way we cannot imagine in Sweden. And I am perpetually convinced that both nations would have a lot to learn from each other, their histories afterall intertwined by the Swedish East-India trade from even before Singapore was officially founded by the British.

Many years ago MM Lee Kuan Yew said that we must ‘remember how we got to where we are’. I figure he meant that when we are sitting at the poolside 200 meters up in the air, at the new 42 billion SEK Marina Bay Sands casino aka conference center, twirling our Singapore Slings, we should remain humble and that we can never allow ourself to think that all this came about by itself. 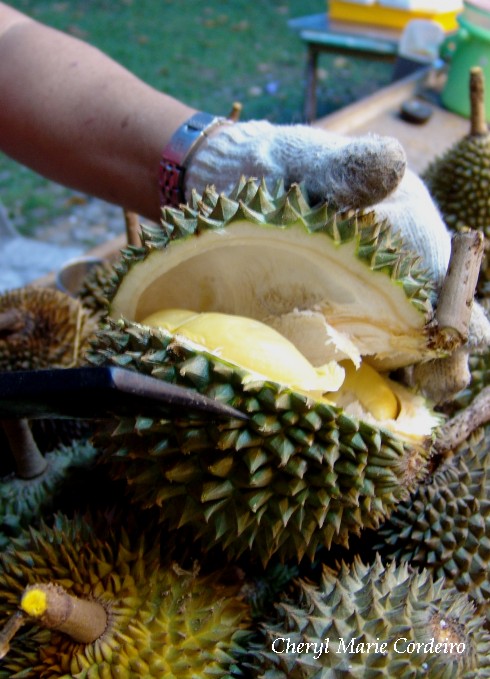 Selecting the fruit and finding the best of it is the first, and crucially important step.

All this occurs to me while I am preparing the base for durian ice-cream from an old Nonya recipe of gula melaka, coconut milk and mashed durian. This recipe belongs to my great-grandmother who in the early 1900s, had many mouths to feed. So what was then a daily necessity – gravy concocted of heavily sweetened durian and coconut cream to flavour plain rice for dinner – is what I am now making in Sweden, as a luxury item with most of the ingredients imported.

The aroma from whipping up this batch of ice-cream in my clean-lined Swedish kitchen calls to mind the old Singapore kampong days where children uninvited would climb in fruit trees in nearby gardens, frustrating the nerves of their old neighbours, plucking fruits audaciously and consuming them indifferent to any worries of the world.

So a poor man’s dinner just about a century ago is turned into a delicates today, a luxurious gourmet dessert that I just bet you can order at Marina Bay Sands. Imagine how things change, yet still remain the same.

*Add more gula Melaka if you prefer it sweeter. I believe my great-grandmother also used white sugar in addition to gula Melaka. As the Nonyas say, ‘agak-agak la’.

Bring everything to a boil. Stir. This deep brown gravy should be ready in about 10 minutes or till the durian fruit softens and blends with the coconut milk. 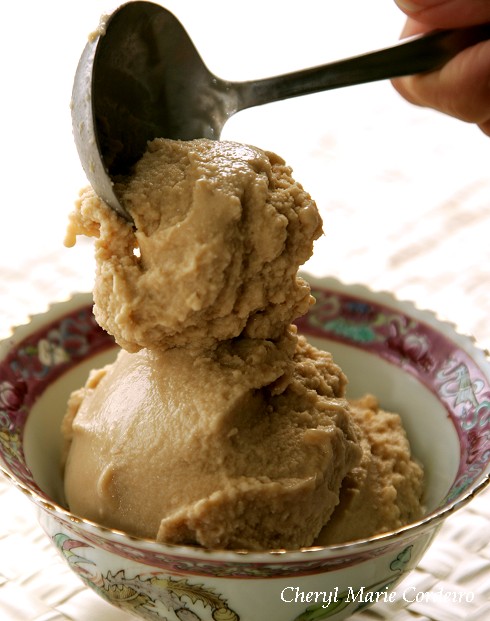 Straight from the ice-cream machine is best!

In a medium saucepan, heat milk, coconut milk and gula Melaka till warm but not boiling. In a separate bowl, whisk eggs and egg yolks till a pale yellow. Once the milk is warm, temper these with the egg yolks then pour the egg yolk mixture into the saucepan and stir over a medium heat till a custard forms. Be careful not to overboil the custard mixture, it should take 7 – 10 mins on the stove for the mixture to coat the back of a spoon and you’ll know then, it’s done.

Pour the durian custard into a bowl, cover with a cling wrap and chill in the refrigerator overnight or for at least 8 hours. Once chilled, pour the mixture into an ice-cream maker and churn till it solidifies. If you don’t have an ice-cream machine, you can set the entire mixture into the freezer, taking it out every half an hour to churn it with a wooden spoon or spatula by hand. This churning process is to break down the ice-crystals, so that your ice-cream will turn out smooth and should be done every half an hour for the next 3 – 4 hours. You’ll have perfect ice-cream then.

Personally, I’d rather have the fruit than any other variations of it in any sort of ice-cold or warm desserts. If you really love durian, nothing beats durian au naturel, straight out of its thorny shell. Maybe slightly refrigerated or as some will have it, half frozen. Frozen durian is creamy itself to pass off as close to ice-cream as is.