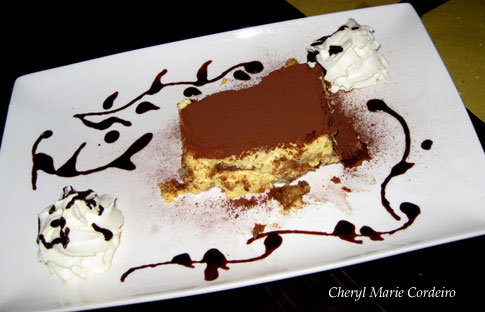 A piece of absolutely delightful Tiramisu’, served at a restaurant in Venice.

Mistaking this dessert to be Japanese in origin due to its name (it somehow reminded me of miso), I had the privilege of tasting my first Tiramisu’ in the 1990s in Singapore. I was not particularly swept off my feet by this dessert at that time and it was only a few years later that I learned it was Italian. Later still, I learned when I had it ordered at a restaurant in Venice, Italy, that this heavenly morsel originated from Venice in its modern form, during the 1970s.

For those passionate about Italian food, Anna Maria Volpi, chef and author of several cookbooks, has a website on Italian cooking. She has also researched the history of Tiramisu’ and gives a detailed history of the dessert where she traced its origins to Zabaglione custard. 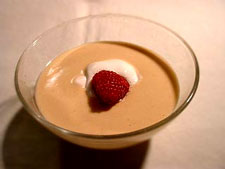 According to Alan Davidson (1999), Zabaglione was not originally a custard but a “caudle”, a sauce used as a custard to fill pies or tarts. It was invented in 16th Century in Florence, in the Medici court and was originally a drink reminiscent of today’s eggnog. Made with wine / ale, thickened with egg yolks, Zabaglione explains why Tiramisu’ is sometimes still served as a parfait, in cups or glasses rather than in slices. Mascarpone cheese, which is of a decadently thick, creamy consistency, was only used as a much later addition to Tiramisu’, so that it could now be served sliced if you wished.

From Alan Davidson, here’s what you’ll need to make Zabaglione:

8 large egg yolks and 1 cup confectioners’ (powdered) sugar placed in a double boiler. Whisk till foamy and then add 1/2 cup of dry Marsala (or Sherry). Beat the mixture for a minute or two so that it thickens in consistency but not so much that it solidifies or ‘scrambles’.

Ever since the Tiramisu’ in Venice, I’ve come to love this Italian dessert, and enjoy the great variation in its recipe. For me, Tiramisu’, despite its alluring sugar-caffeine combination, isn’t so much a pick-me-up as it is an experience of the palette, where one is whisked away to a time of the Medicis in Florence and Giacomo Casanova in Venice. One tastes in this dessert, the ingenuity of Florentine cuisine and the romance of Venice. If there were a dessert for a candlelit dinner for two, a quiet moment to be shared, then Tiramisu’ embodies the very sentiment and charm unique to Venice’s waterwayed rhythm.