Views from a Gondola 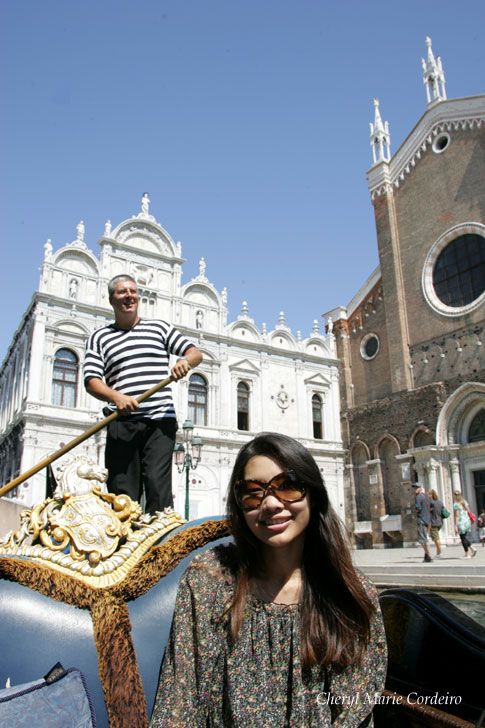 Not a cloud in sight but the gondola excursion proved cooler than expected as the gondola glided into narrower waterways with shade from the brick-walled buildings.

With over 400 bridges in Venice, it is perhaps quite unmistakable that Venice has been built for one to navigate it on foot. Still, considering Venice’s history as a city of trade, with most building facades and main entrances facing the waterways, I think one cannot discount exploring the ancient waterways of this lagoon city when there.

Venice has always been connected with the sea with its triumphs, conquests and adventures being mostly seaward bound. Marco Polo for example, was a Venetian merchant during the 13th century who gave us the most fascinating insights to China in his book Il Milione, where he met with Genghis Khan and travelled the Silk Road trade route. In the 14th century, despite its population being halved by the plague, the water city succeeds in becoming the leader of four seapowers of the Mediterranean Sea. A century later, it conquers the island of Cyprus. 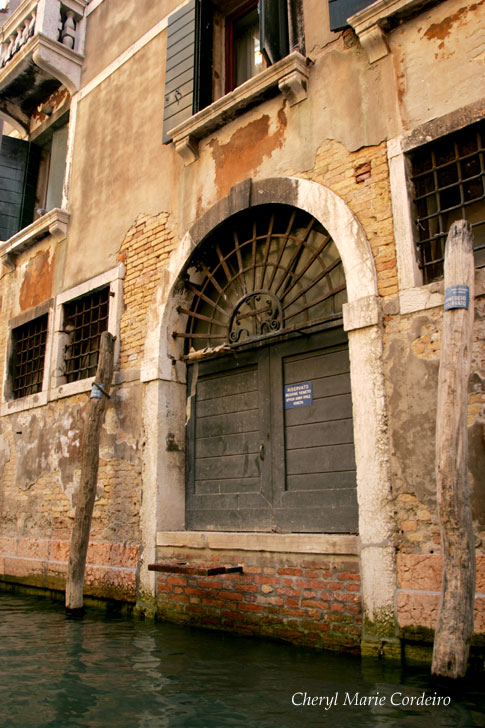 The Adriatic waters are seasonal in oscillation, with summer months being low tide and winter months, high tide. The waters go right up to the doorsteps of many private homes, shops and warehouses.

Because of its lagunal structure that somewhat prohibits the expansion of the city, Venice is one of the most unspoiled and untouched (with the exception of time) cities of Italy. Today, it is still the Adriatic waterways, with its seasonal oscillations, that run like veins through its buildings, coming right up to hundreds of individual doorsteps, shops and warehouses, going under hundreds of bridges. You can use these interconnecting waterways to explore the various lagoon islands of Venice – Burano, Murano, San Francesco del Deserto, San Lazzaro degli Armeni and Torcello – each lagoon having its own distinct characteristic traits and personality. 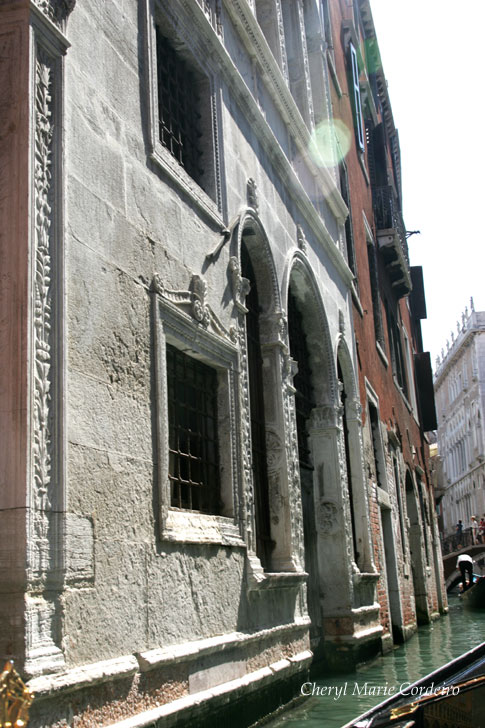 Venice is one of the more unspoiled cities in Italy, if only touched upon by time. A gondola excursion makes accessible some of the more beautiful facades of houses and buildings facing the waterways.

Tourists these days have the option of exploring the waterways in Venice by public ferries, motor run water taxis, or by the paddled gondola. Personally, I feel that it’s the fleet of gondole, beautiful looking when docked with their black lacquered bodies and languid in movement, that are best for exploring the inner city waterways. The equivalent of a leisurely stroll that leaves a warm feeling at your core, the amour of the gondola is that it lets you forget the rush of the Others in high summer, where it becomes just you and Venice. 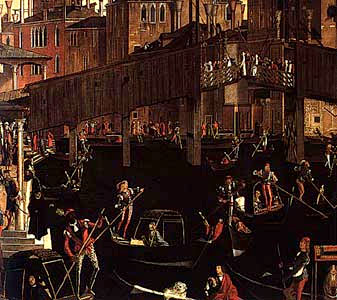 “Le gondole di Vittore Carpaccio”. A painting by VittoreCarpaccio, depicting gondole from the 17th century, with cabins. The gondole already had black hulls by this time, due to the sumptuary law that curbed extravagence just around the Baroque period.

The gondola, which was first documented in a decree from Doge Vitale Falier from the end of the 11th century, is how Venice should be explored. At one time during the 1600s in Venice, there were as many as 10,000 gondole working the waterways, their romantic aura more of a consequence of their function. Today there are about 500 gondole, whose job is to ferry tourists. As most facades of the houses face the waterways, the gondola excursion lends an excitingly different perspective of this artistic water city, making accessible, views of facades of buildings otherwise remote by way of walking its cobbled labyrinth streets.

The gondola has gone through several morphs into its present shape and form, with early depictions of its appearance by artists such as Gentile Bellini, Vittore Carpaccio and Giovanni Mansueti. Not always appearing sleekly black lacquered, gondole were colourful and ornately decorated during the 1500s, when Baroque art and design was at its peak. A sumptuary law however, was passed thereafter in restrainment of extravagance and luxury, in part also to distinguish the upper echelons of the society travelling in the gondole. As such, all other passenger type gondole were to be black and the more ornate gondole were reserved for nobility and important persons. It was not too long ago, during the 1700s that the gondole were fitted with a cabin to protect the privacy of those travelling. 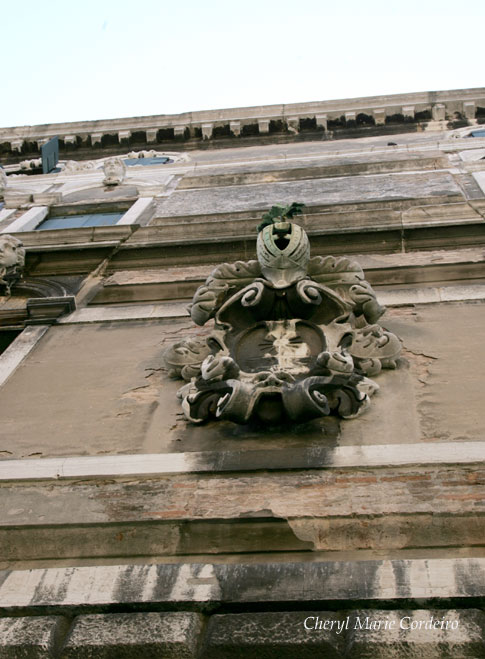 A coat of arms on the facade of a palace.

When stepping into a modern day gondola, the first thing that struck me, knowing very little about the make of the gondola, was that it was precariously weighted to one side. We tried awkwardly then, to shift our weights around so that the gondola wouldn’t lean so to one side, that it felt we might capsize. We were told by our gondolier however, that it was preferred that the gondola weighted asymmetrically, since it made easier navigation for him. 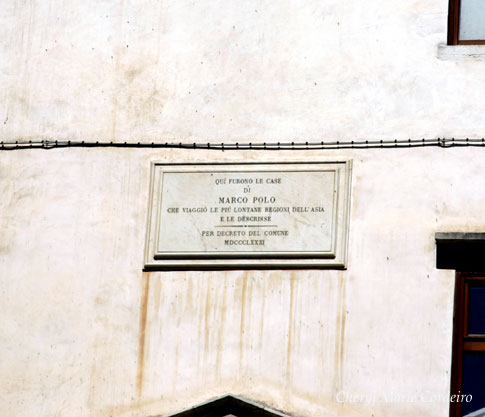 The carved plaque on the wall reads, “Here were the homes of Marco Polo who travelled to the most distant regions of Asia, as described by the decree of the commune, 1881”.

Since the 1800s, the gondola has in fact taken on a more asymmetric construction for the purpose of manoeuvrability. As the boat is inclined to turn left with the sweep of the oar, the asymmetric gravity shift to the right meant that the gondola would be able to move straighter when moving forward. The weighted inclination to the right also acts as a counterbalance to the weight of the gondolier.

Sitting in the gondola, it wasn’t difficult to understand the singing that went along with the rowing of the boat. It was simply stunning to listen to the operatic tunes that baritoned forth several gondoliers that passed in the opposite direction, some of whom had such a lovely and gracious voice that I wondered why they were not professional singers. The singing also had a more practical function; the walls of the buildings that lined the narrow waterways were perfect for bouncing off sounds that alerted other gondoliers of an oncoming vessel, especially when approaching a blind spot or a concealed corner. 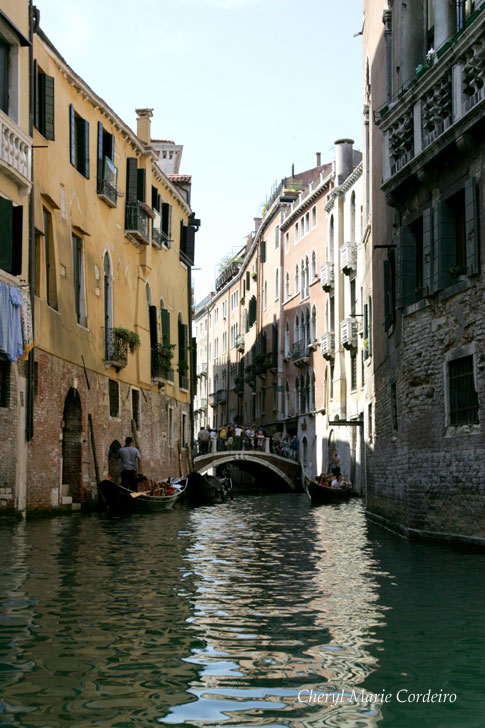 The close walls that line the waterways provide excellent instrument for echoes. One can hear a gondolier singing from quite some distance away along these canals.

Our gondolier was a delightful personality and an excellent singer! Upon compliments he mentioned that he was an even better singer in the bathroom. We told him we had rather expected for him to serenade us with O sole mio, but he said he didn’t do that song, as it was Neapolitan and not typically Venetian per se, and proceeded to sing a modern Italian love song so moving, the tones of his voice still echo in my ear as I write this. 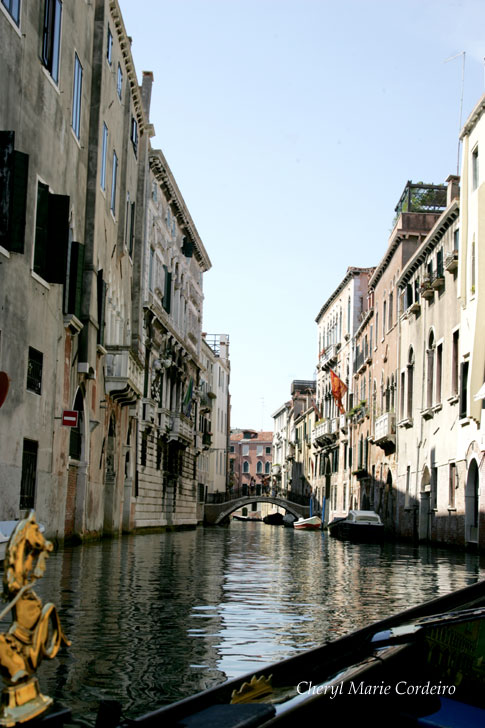 Many private homes in Venice are accessible via boats and it is not uncommon to find boats anchored to entrances that face the waterways.

The gondoliers in Venice are easy to spot when there, where most are dressed in a white and black striped top, black pants, a wide brimmed hat and a red scarf for a splash of colour. Simply approach them to negotiate your route and they’ll let you know the fare. The Venetian region is one of the more expensive areas in Italy, whether its lodging or food and the fares for a gondola excursion are generally pegged at an industry standard.

2 thoughts on “Views from a Gondola”