Kueh Wajek with a Nonya twist 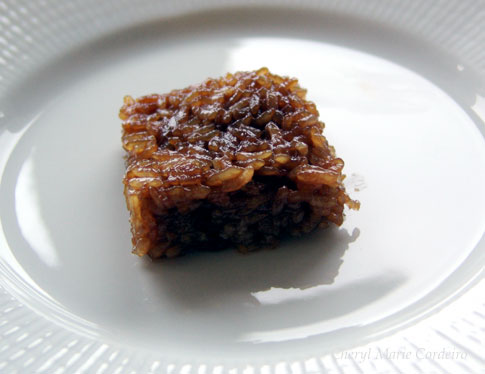 Kueh wajek (also, kuih wajik) is a sweet morsel of Malay origin, eaten at anytime of the day as a dessert.

Kueh or kuih is the term given to various bite sized food items in the Malay archipelago. Growing up in the region, I had tremendous opportunity to savour the various kinds of kueh-mueh or cakes.

Kueh wajek has always been one of my favourite desserts when growing up. Though a home-cooked dessert, Singapore, since its early immigrant days has had a burgeoning food culture, which allowed this cake to be easily found at the Malay stalls in most any Singapore hawker-center.

A paradigm shift in the Singapore home culinary scene also began thereabouts during the 1980s where city life picked up speed and fewer people of all races, found time to eat home. So even back then, I remember buying kueh wajek at hawker-center stalls, biting into it convinced that I would never need to learn how to make this in my lifetime. Besides which, the only person whom I knew, who knew how to make this had in true Peranakan tradition, taken both recipe and method with her to the grave.

Living in Scandinavia however, meant a different home culinary experience. Dining out is fairly costly on a day to day basis and people here enjoy eating at home. Of course, there are also no Malay stalls in sight that sells kueh wajek.

Luckily, my mother had grown up making this very dessert with my great grandmother, so with her help, we’ve brought back into our households, the Nonya way of making kueh wajek, which in true IT age and tradition, I’d like to share with you.

This specific recipe is a variation of the one found at Kuali.com, which is in original Malay style. The Nonya twist is that only coconut milk is used, for a richer taste to the glutinous rice and that the glutinous rice mixture is fried in a pan rather than steamed. The frying renders an overall different texture to the kueh wajek, with the grains of the glutinous rice still intact. Steaming the mixture would encourage the grains of rice to melt into each other, producing a different consistency to the kueh (or cake). Depending on preference, either way will render a deliciously sinful treat for that afternoon tea!

* The screwpine or pandan leaves can be bought at most Asian grocery stores outside of Asia. They are there to enhance both flavour and scent of the dish, but will not kill the dish completely if unavailable.

I began making this kueh / cake by soaking the glutinous rice overnight in water. The soaking will enable a relatively shorter cooking time the next day.

With the glutinous rice strained from water and ready for use, I melted the gula melaka (dark palm sugar) in the coconut milk, thereafter straining the coconut milk to ensure a smooth texture.

The glutinous rice was then added to the sweetened coconut milk. This all went into a frying pan on low to medium heat, and castor sugar was added. I used a non-stick pan that made the work easier to handle and the mixture fried quite beautifully without burning.

As the coconut milk dried out, the coconut oil came forth and coated the sweetened glutinous rice in a layer of fragrant oil. It was at this stage that the texture of this dessert formed, crisp and caramelized. 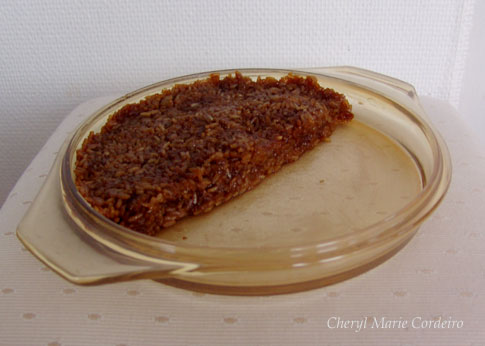 The sweet glutinous mixture pressed into a glass form.

Once the glutinous rice was cooked, I pressed the mixture into a glass form. It was cut and served when cooled. The dark brown colour of this kueh depends on the proportion of palm sugar used and to what extent the sugar has been caramelized.

In the Scandinavian context, I think this warm and comforting kueh will fit right onto the Swedish julbord and Christmas smorgasbord.