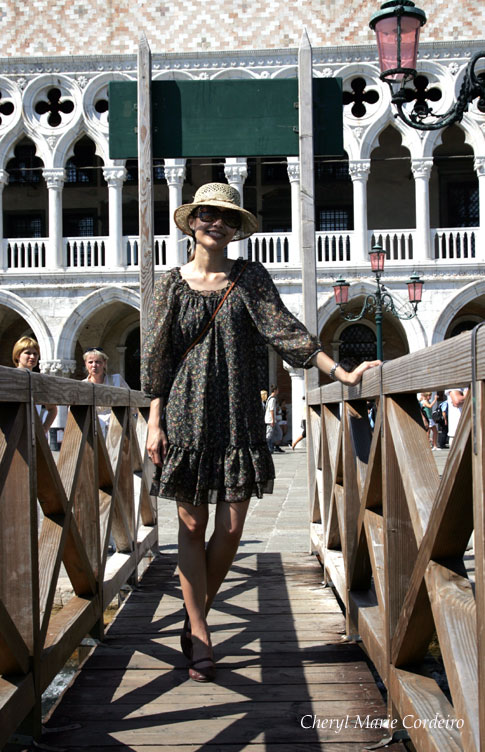 In front of the Doge’s Palace, St. Mark’s Square in Venice.

When visiting Venice, it isn’t difficult to gravitate with the crowd and find your way to the heart of Venice itself, the Piazza San Marco or St. Mark’s Square.

I agree with art historian Hugh Honour when he described the Piazza San Marco as “beautiful at all times of day or night” (2001). The piazza, like a compass to Venice, it contains so many interesting facets that contribute to the personality of Venice itself, that we found ourselves drawn back to St. Mark’s Square several times during our stay there. 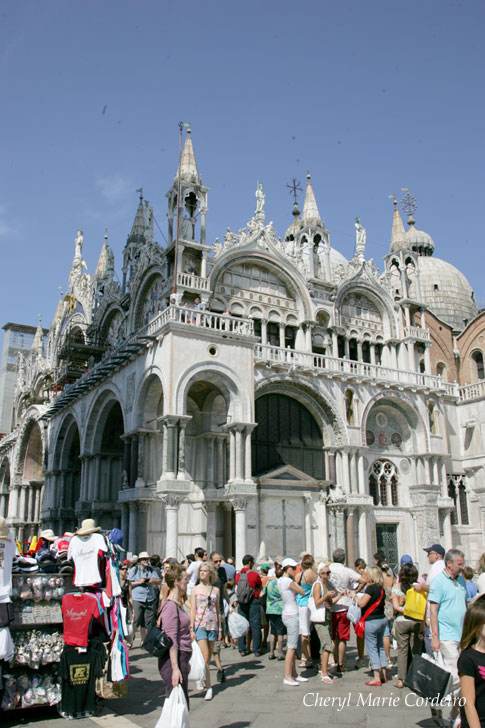 The wide space, devoid of any modern day traffic, is devoted solely to travel by foot. Souvenir vendors line the late 13th century herring-bone paved square, the patterns on the pavement reminiscent of the market stalls that traded in the square centuries before. The bustle is no less today, the colourful summer clothes of tourists around the square add to the festive feel of the place during the day.

A cozy sight is the vast number of pigeons that swelter in the shady pavement under the high arches of St. Mark’s basilica away from the direct heat of the hot summer sun, oblivious to the curious tourists seeking out their interests to the corners of the square. 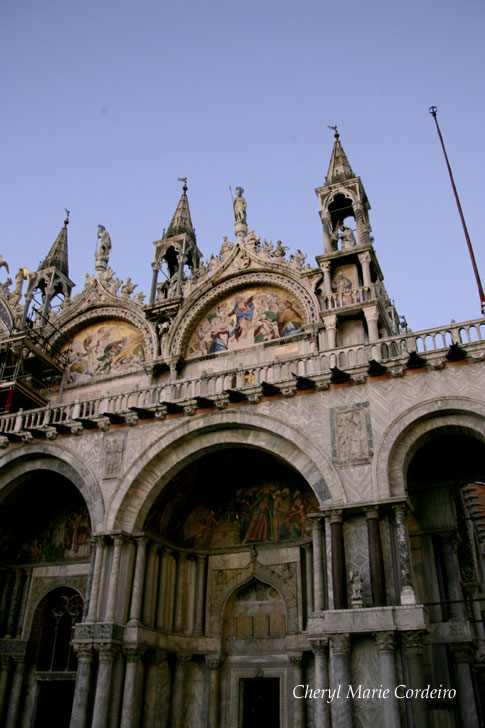 View of the tops of St. Mark’s Basilica, in the evening light.

There are a number of outdoor cafés that play jazz when evening comes, filling the square with lively music, the vibrations of talk and applaud from guests and you can’t help but feel you’re in a very large open-air hall filled with entertainment, calling to mind Napoleon’s impression of St. Mark’s Square as the finest drawing room in Europe. 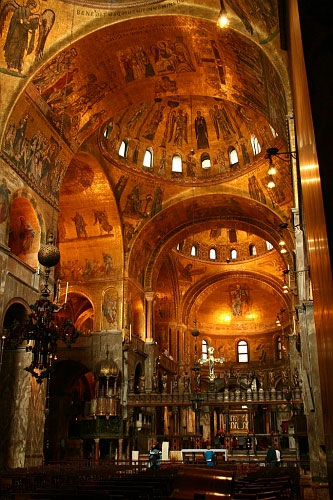 The interior of St. Mark’s Basilica. Photo by Petunia.

A magnificent sight and one filled with expectancy of a great discovery of sorts, is when walking down the Piazetta San Marco, the area of the Piazza between the Doge’s Palace, which is also the setting of the 2005 movie, Casanova and the Biblioteca Marciana, also the national library of Venice that houses some of the greatest classical manuscripts in the world. 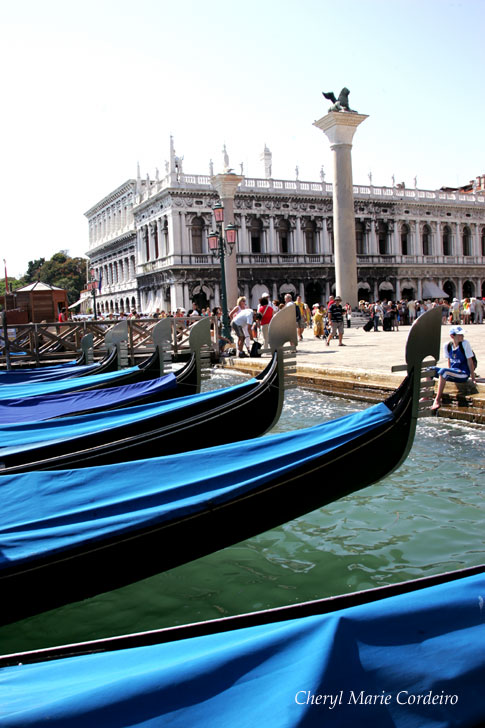 Sleek gondolas line the waterfront between the Doge’s Palace and the Biblioteca Sansoviniana, at the Piazetta San Marco.

Beginning with the Napoloenic wing, the Ala Napoleonica, which he took as his palace during the French occupation towards the end of the 1700s, you could spend the entire day exploring the buildings around the Piazza, the most striking in architecture would be the Byzantine Basilica di San Marco, with its dome shaped tops surrounded in intricate carvings.

The massive weight of is 11th century Byzantine Basilica, which hardly lets in any light in contrast to gothic structures, is something you can feel as you walk into the building. The lack of inner light is somewhat compensated by the immense sheen that comes from the approximate 8,000 square meters of gilded gold mosaic that cover the entire ceiling of the basilica; a work of art that would have taken hundreds of hours to complete in meticulous drive. Make your way to the top of the Basilica, out on its balcony and you get a splendid view of the Piazza, with its happenings below. 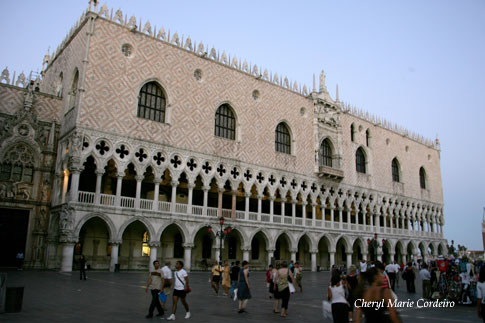 The Dodge’s Palace that faces the lagoon and the mouth of the Grand Canal.

Next to the Basilica is the Doge’s Palace of gothic architecture, as a feather next to the Byzantine Basilica, the Doge’s Palace provides the yin to the yang of the area. The light play in this building is fantastic to behold, especially when the evening cast of sunlight fills the corridors of this Palace, creating shades of patterns on the stoned floors that fills you with warm delight just looking at it.

Sweep your gaze to the right, past the gateway of Venice, the columns of Venice’s two patrons, Marco and Todaro that stand by the water’s edge, which was also the site of executions in the city in previous centuries, and you’ll find the Biblioteca Marciana. This building, thought of by many as the best building erected since Antiquity, was designed by Jacopo Sansovino (1486-1570), a Florentine architect and sculptor. 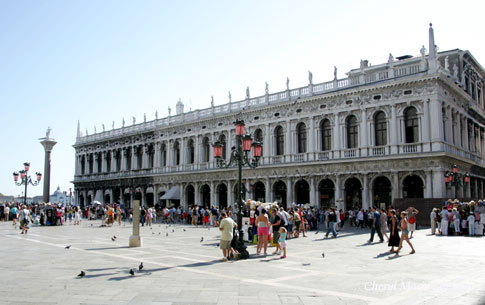 At the Piazetta San Marco, facing the Biblioteca Nazionale Marciana, the National Library of St Mark’s, designed by Jacopo Sansovino. This structure stands opposite the Doge’s Palace, Venice.

Coming back almost 360 degrees, is the Napoleonic Wing of the Procuraties, the Procuratie Vecchie, the ground floor of which is today occupied mostly by cafés, where you can relax in the evening and recuperate from a day’s exploration. The scene at St. Mark’s Square takes on a mellower glow come sunset, where the hurried footsteps of the tourists dissipate as the buildings of attractions close their doors for the day. A calmer Venice shows up during these hours and the best thing to do is to sit back and enjoy a good Tiramisu’ and a cappuccino whilst listening to the evening jazz at the square.

For those interested in visiting Venice, you could try the hoteltravel.com site, with Hotel Reservations in Venice for easy and no fuss bookings.

4 thoughts on “Piazza San Marco: the heart of Venice”