Early autumn, we had the pleasure to see as our guests, a group of Singaporean students, who were out to explore our nook of the western Swedish archipelago. Some were to stay in Gothenburg within their exchange program, some were to leave for their stay in Italy.

The group met for lunch, after which we all went out in the garden to have our dessert straight from our trees and bushes. Autumn is the ideal harvest time for most fruits and berries in Sweden and pleasantly enough, we had plenty to offer of red currants and plums. The plums, being big, sweet and juicy, turned out to be something of a favourite! 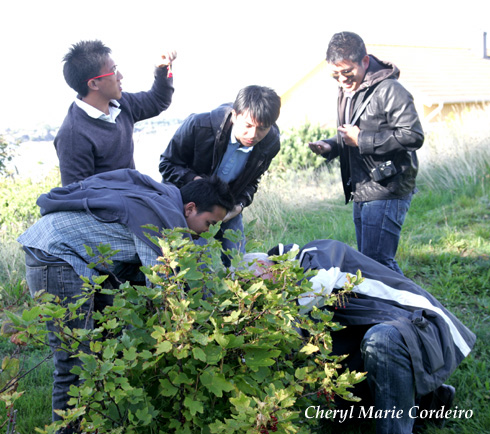 Before taking a walk to the beach, some red currant picking in the garden and eaten straight from a branch without being packaged and wrapped in plastic first. A nice alternative to city-living.
Photo © Ryan Chung, J E Nilsson and C M Cordeiro-Nilsson for CMC 2010 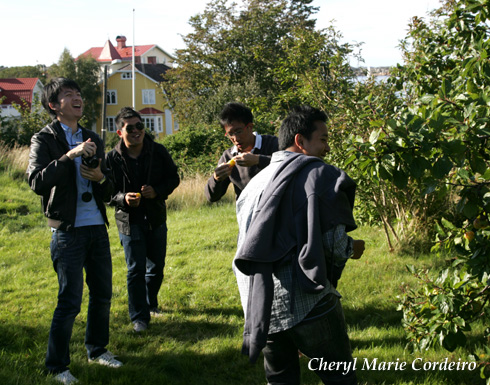 Plum picking and enjoying the harvest. 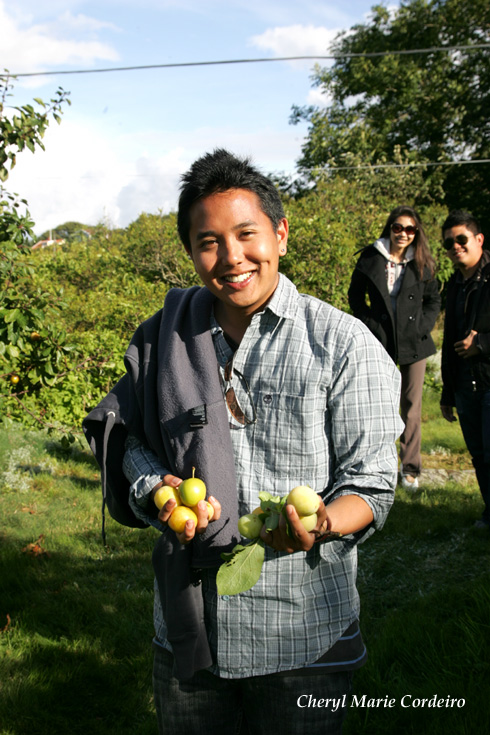 Matt with a handful (or two) of plum picks. 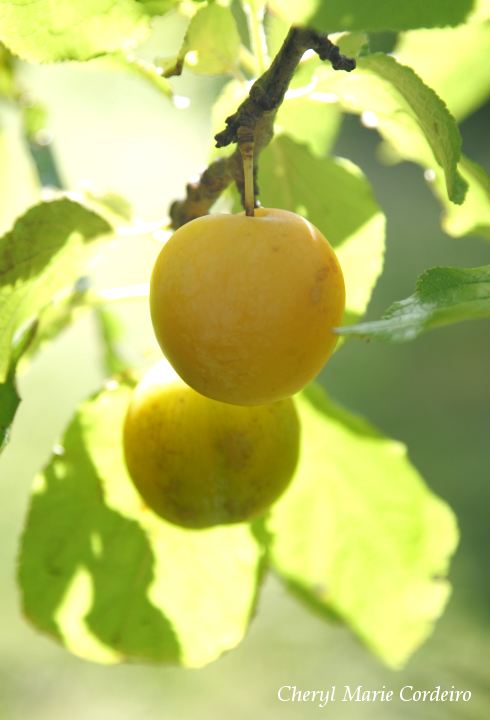 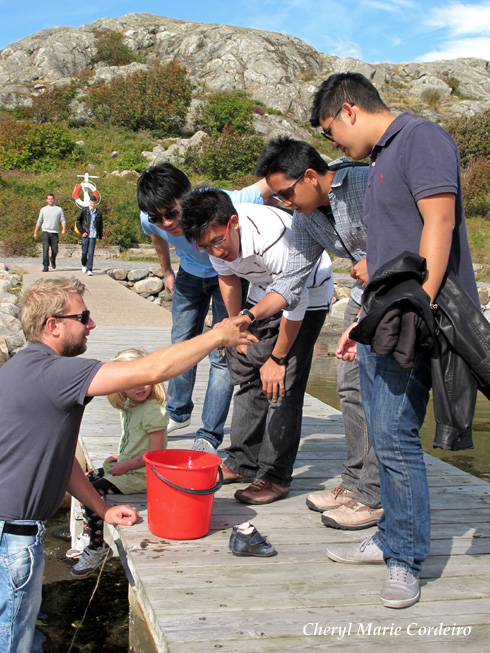 Near our place is a neat and well protected bathing beach with a solid, rocky pier to break the waves. This beachside haven creates a shelter for small children and accompanying adults, who prefer warm and shallow to deep and cold water.

Along this pier is a favourite crab fish spot for both children and grown-ups alike. All it takes is a string and an opened clam in the end of the string, and most any crab will climb on board and refusing to let go, will follow the string up. Usually the “catch” is just toppled back into the sea at the end of the day since the crabs are considered too small for eating anyway. Somehow it appears as if there’s developed an established agreement on how to run this show. The crabs get to eat ready opened clams, and in return they agree on being lifted in and out of the water during the day by small children. All parties seem to be ok with this arrangement. 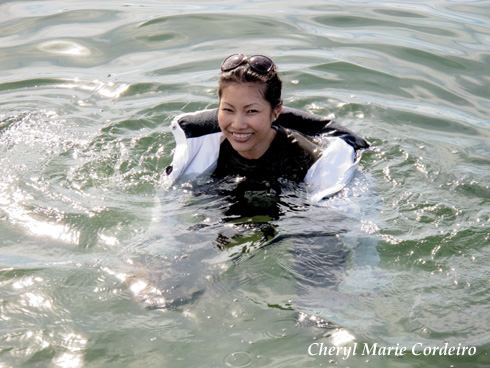 I fell in, full gear, with electronics and all, when I tried a little too hard for the right camera angle!

Leather shoes and slippery rocks are a bad combination. Screaming and sputtering sea water, in I slid into the sea with camera, mobile phone and all! This was my third ever swim in the Nordic waters and I remain unconvinced about the water temperature here ever being fit for bathing, even after trying this with clothes on.

After a quick change out of soggy clothes, we were ready for new adventures! 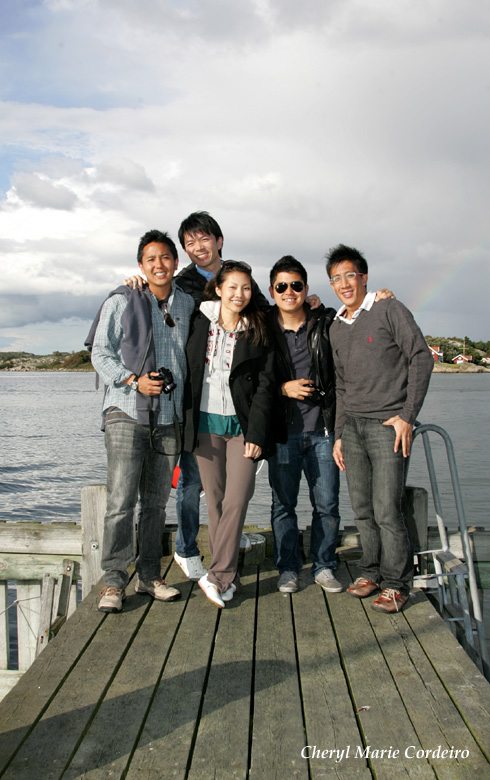 With the guys from left to right: Matt, Jerry, Cheryl, Ryan and Nate, Swedish west coast. JE, behind the camera. 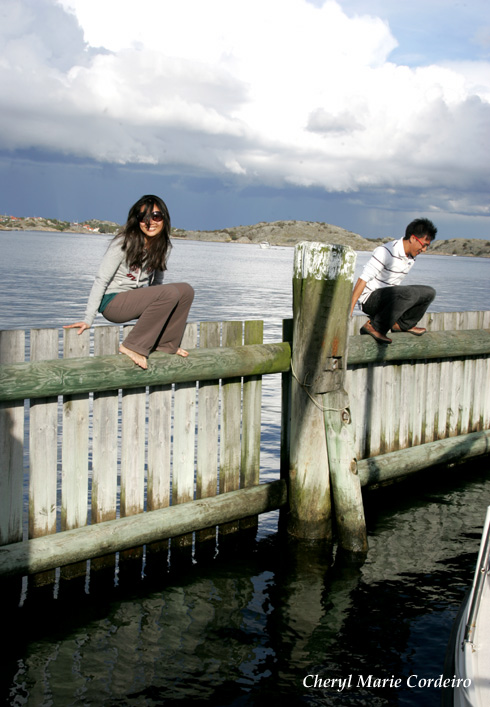 Cheryl and Nate, inching their way out to the end pole of the jetty fence.

And it was here that the guys began teasing me and Nate, “Nate, don’t do a Cheryl!” and to me, “Eh, once a day is enough already!” referring to my accidental fall into the sea earlier on. 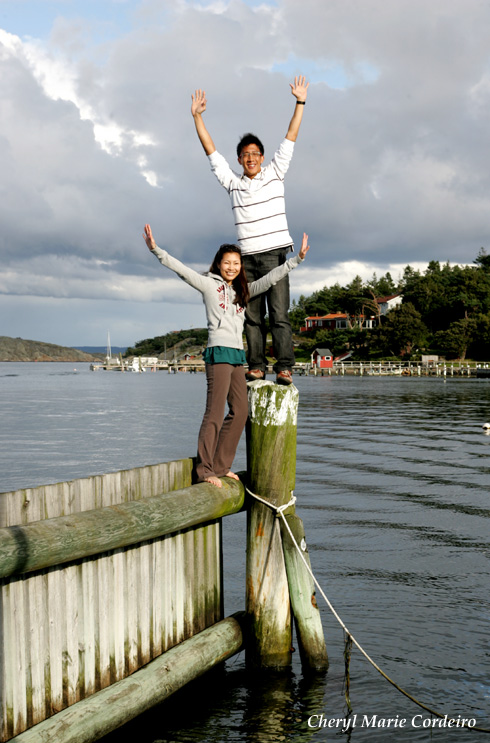 Made it, Nate first. Now we just needed to get back! 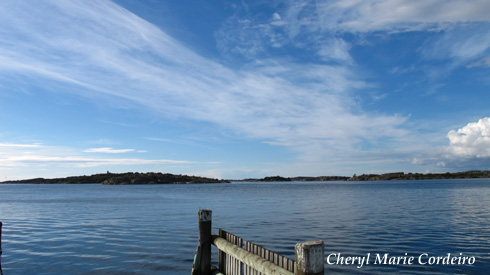 View from the jetty.

Apart from the small mishap of falling into the sea, that drowned all electronics on me, spending this calm and sunny mid-autumn Sunday with our guests, was just the thing to do. 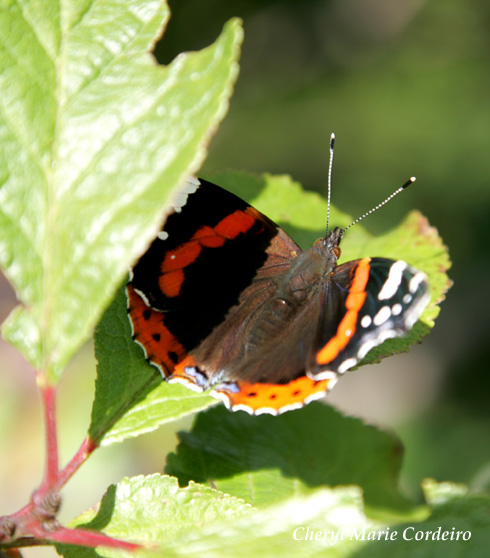 A different kind of autumn guest in our plum tree, an Admiral butterfly, helps itself to some fruit juice in preparation to migrating right back to a warmer climate over the winter.