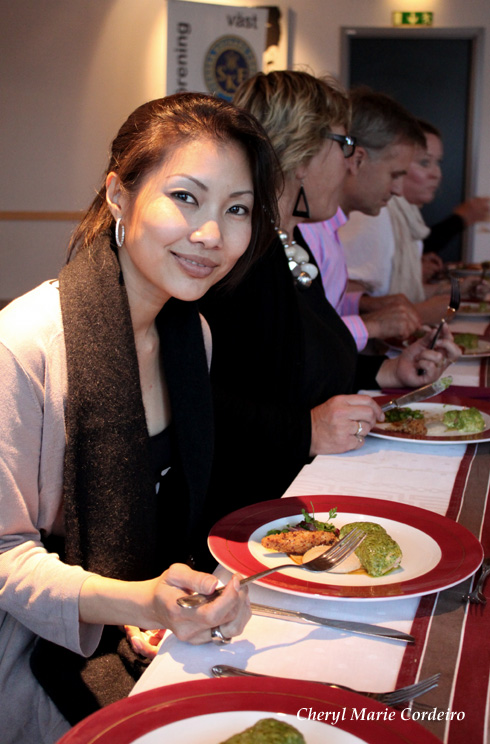 With the upcoming Culinary World Cup in November 2010, in Luxembourg in mind the Gothenburg Culinary Team invited friends and members of two culinary interest groups to a three course dinner event during this last weekend. 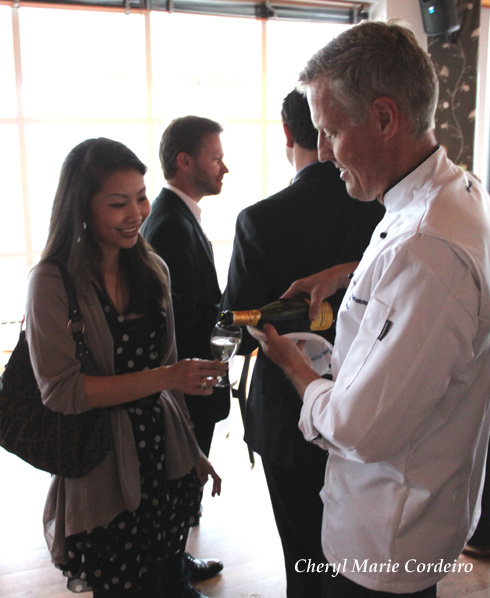 The atmosphere at the mingle session was as usual relaxed and friendly. The autumn air outside with its light drizzle coupled with a chilled white Champagne prior to dinner heightened our expectations of an upcoming display of culinary artistry. 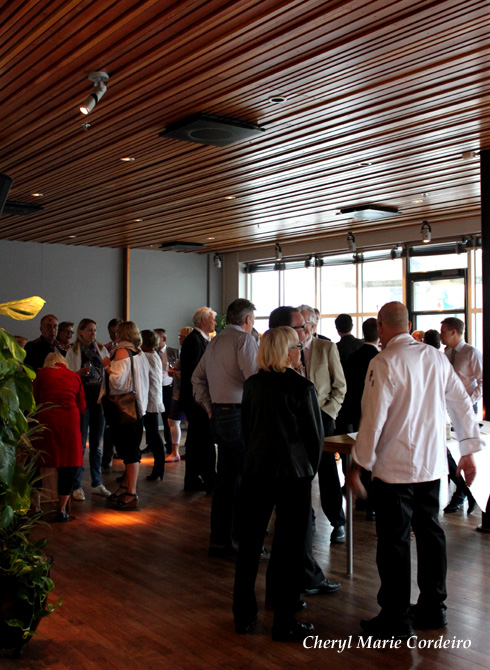 It was during the mingle session prior to dinner that guests got to meet two managers of the Gothenburg Culinary Team, various board members of their own mother organization that is the Western Swedish Chefs Association (SKF), and members and friends of the Western Swedish Academy of Gastronomy (VGAK). The discussions bounced lightheartedly and passionately between topics about what’s current and coming in the culinary world, and not the least what was to be served for dinner that evening. 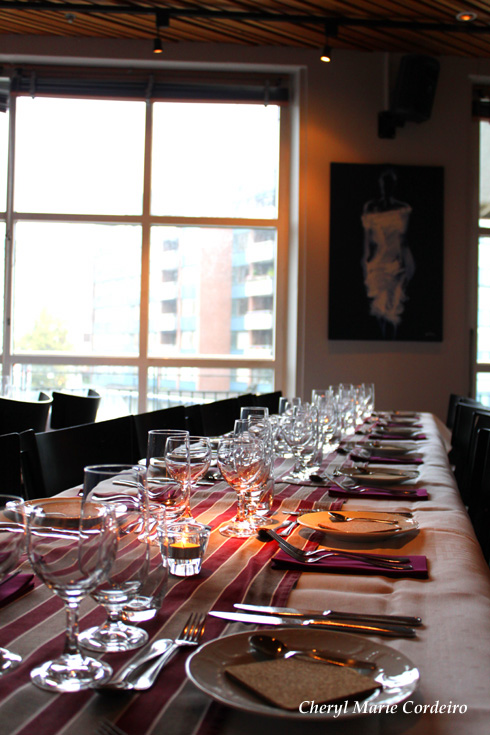 Table setting – the number of wine glasses and cutlery indicated what to expect in terms of the number of dishes to be served. What was on the table excluded the apéritif and dessert wines served.

Sweden has several regional culinary teams, where it’s the Gothenburg Culinary Team that seems to have excelled most in both regional and global competitions that includes:

It was autumn in the air and one of those light, sunny days yet filled with melancholy. Autumn in Sweden is when you can stroll in a cumulus of windswept golden leafs, feeling both the excitement in the air of upcoming frosty winter’s nights, with diamond sharp stars set against a jet black velvety night sky and basking in the mellow memory of the past summers day’s filled with birds’ song and the sweet numbing fragrance of a garden filled with flowers.

The dinner was set in this mood and opened with a mysterious glass jar, of the type in which one would traditionally preserve the late summer’s harvests. The jar, when opened, let out a steamy puff of chantarelle aroma with a touch of smoked sausage on a bed of egg royal. It was from this very first serving that we knew we were in expert hands. 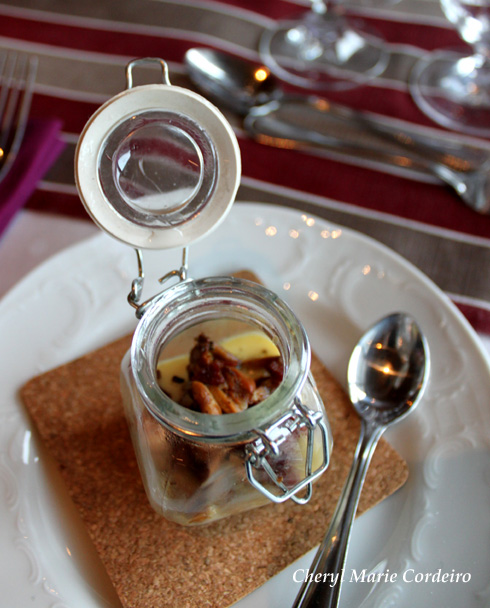 Innovative presentations are key to high scores when it comes to international culinary competitions. Here, an appetizer of chantarelle and smoked sausages with and egg royal steamed and presented in a tiny lidded jar.

The following dish was a worthy follow-up, which sent your thoughts towards the short and misty autumn days of northern Sweden, with a fully flavoured meat dish with a touch of dark ale and vegetables just fresh from the soil. Porter baked and sautéed reindeer calf, served with poached baby onion and a pepper glazed carrot on a bed of hard cheese flavoured semolina pudding, all presented in a deep white dish. 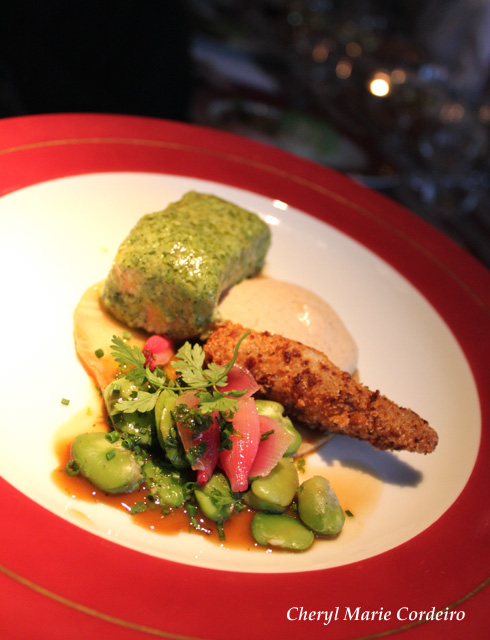 The main course was designed by Johan Laursen, the Team Captain, a flowery and light herb poached salmon with Jerusalem artichoke and Karl Johan (Porcini) foam mushroom sauce, pickled red onion with a Madeira sauce. All set on a thin slice of broth sautéed celeriac. I hardly dared to step into the kitchen this evening, having watched countless reality shows and movies on what goes on behind the scene in restaurant kitchens. With board members to several culinary associations as dinner guests, I had expected the tension and stress in the air to be so thick, one could hardly walk through it without themselves feeling the impact of the evening rush.

But despite the upcoming pressure later in the autumn, a visit behind the scenes in the kitchen told that the team was in absolute control. Johan was calm and the dessert team were in good spirits, putting the final touches to the dessert plates. 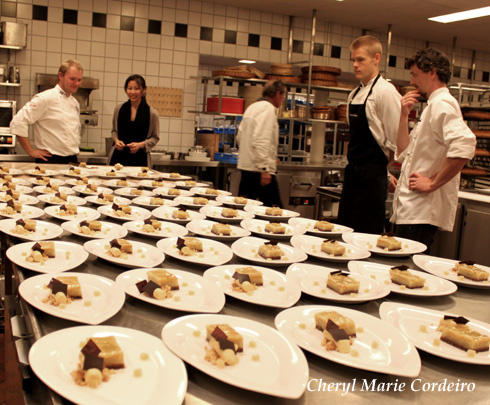 Together with Jimmy Wollberg (far left), who is also part owner of Berzelii Chocolate, Sweden, with the dessert. The finishing touch to the desert plates was a light puff of vanilla foam to accompany the layered apple cake and candied apple marmalade. Every single dish is equally important and get its equal share of intense attention just seconds before they are carried out to the guests. Jimmy Wollberg, putting the finishing touches to the dessert plate while Chairman of the Swedish Chefs Association, Rolf Sjödin, looks on. Rolf had just arrived from another engagement at Liseberg in Gothenburg where the team had baked and packaged more than 600 exotic cream filled cookies. Just before dessert was served.

The evening continued as pleasant as it had began, with a table generously set with coffee and avec. This dinner still being nothing like the big canons that will be rolled out for the Culinary World Cup 2010 we indeed say thank you for this evening, and good luck at the upcoming competition.

It is also good to notice from the world news that Singapore’s team is doing well too. Just recently they scored a gold medal at the Pattaya 1st Culinary International Competition within the same International culinary network.

It is nice to experience in person how something as pleasant as food can bring people from all corners of the world and all walks of life together, with just one shared interest at heart.