Sneak preview of the Gothenburg table, before the Luxembourg Culinary World Cup 2010 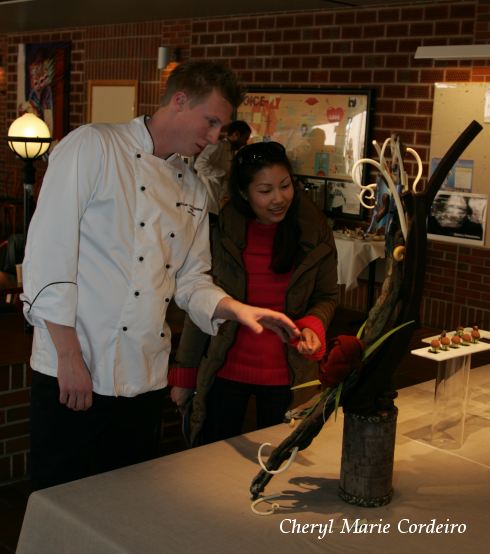 In preparation of the upcoming Culinary World Cup held in Luxembourg in November 2010, the Gothenburg Culinary Team was doing a ‘dry run’ of the competition dishes. As luck would have it I was invited to take a sneak preview of their efforts if I could make it to Uddevalla, just north of Gothenburg, Sweden and of course I’d love to. 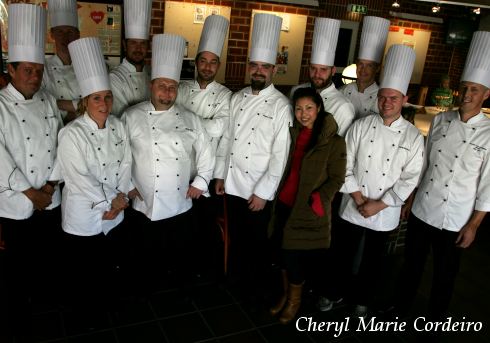 Meeting with the whole team.

At this point in time, the team is already in the later stages in their preparation for the international competition and had set up a complete display table that resembled the one to be judged in Luxembourg. This entire exhibition was a team exercise that acted as a show-case plus brainstorm session for the team members, showing in detail how things right now would look like when put together.

Even if their food display already looked thoroughly breathtaking and appetizing, the fact was that all dishes would still be improved upon before the final design that would go into the competition was set.

This event was rather nondescript for their efforts, a showing mainly for themselves, friends and colleagues. It was hysterical to observe that all visitors to the display table were frustrated that entire set meals, plus breads and desserts were strictly for display only. There would be no touching, no tasting, no licking, no eating of any crumb on the table as the crumbs would most likely be part of the dish display and most carefully placed where they should be.

However infuriatingly tempting the setup was, it was still mighty fun to witness the preparations for this special brand of gourmet cooking, one that you rarely actually get to eat anyway. 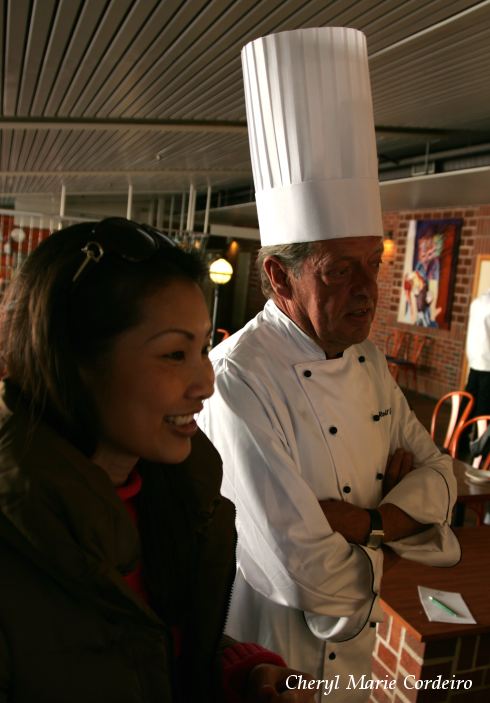 Chairman of the Swedish Chefs Association, Rolf Sjödin, overlooks the efforts and adds experience to the rest of the teams youthful enthusiasm. A fruitful combination of mutual respect.

The table was created under an overall children’s Mother Goose fairy tale theme which related to magic and mystery. The original story was written by Elsa Beskow, in the early 1900s. She was one of Sweden’s most renowned author of children’s books and the theme of this display table reflects one of her books entitled, Tant Grön, Tant Brun och Tant Gredelin, its English title translation being “Aunt Green, Aunt Brown and Aunt Lilac” – a little bit like Mary Poppins minus the umbrella.

The setting was presented in section according to how it would be judged, with one presentation table of a cold buffé, one set of tapas, one vegetarian meal with three dishes, and a five dishes meal, a set of desserts and finally, a selection of petit fours designed within the overall theme.

Meeting the team in Uddevalla
The table was set up in Agnebershallen, a modern exhibition complex in Uddevalla in the northern part of the western Swedish coastal region. A place with a long history and close proximity to fresh fish and cold, salty waters. 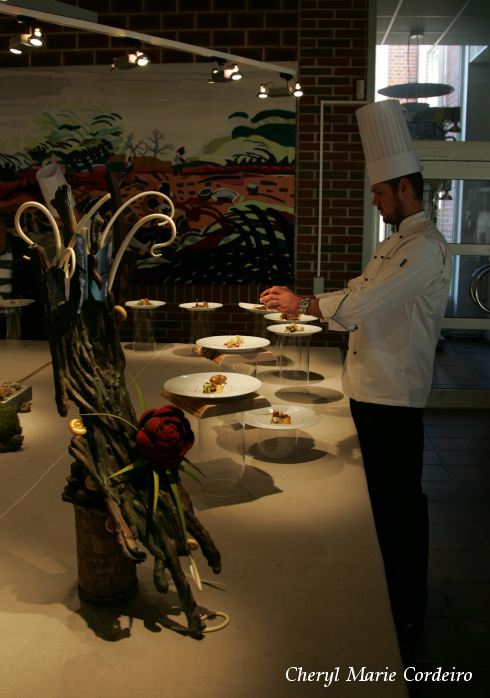 This chocolate sculpture will be modified and improved upon before the Culinary World Cup 2010 competition. The team spent several hours discussing its variations, bouncing ideas off each other regarding its final presentation. 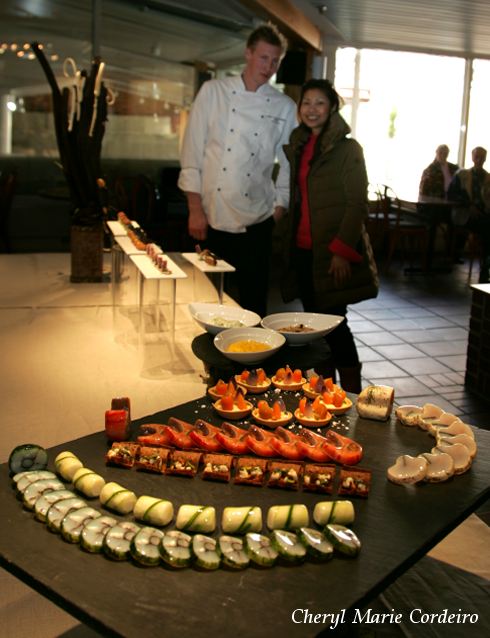 For display purposes only – the cold buffet.

The first section in the competition is the “Show Table” with a cold buffet. From the front we have Haddock slices with red and green seaweed. Next are Cauliflower pannacotta with cucumber, a good and uncomplicated idea. Then, chanterelle and turnips served with pistachio nuts, lovely fresh red trout and salmon with king crabs and furthermost away tartletts, with potato cream, carrots, pickled onions and yellow beet roots. Together with this comes a set of three dip sauces – Herbs and Capers, Saffron and capsicums and a dip made of a variety of chopped nuts – making one dip sauce to go with one fish. 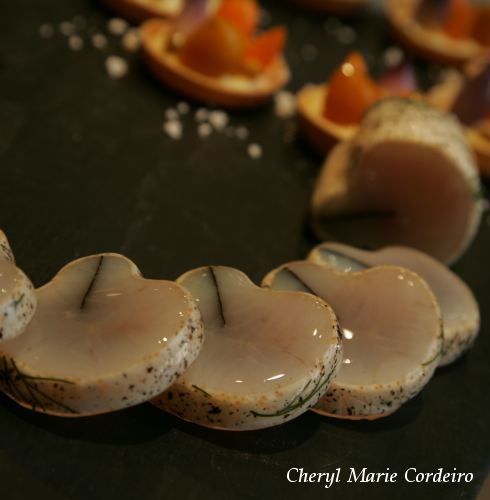 Walleye with a blanket of roe, dill and leek ash. 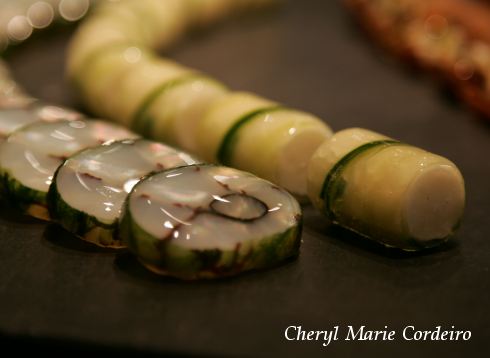 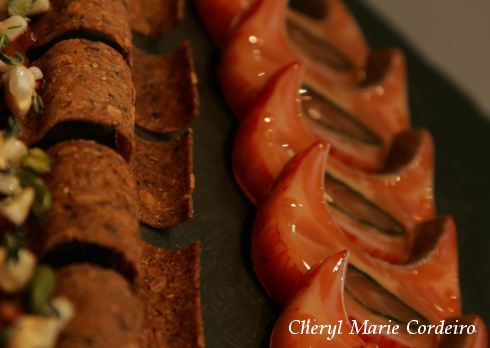 Left: Chantarelle and turnip wafers, served with chantarelle mushrooms and pistachio nuts in its fold. Right: Trout wrapped over a center of salmon and again, wrapped with king crab meat. 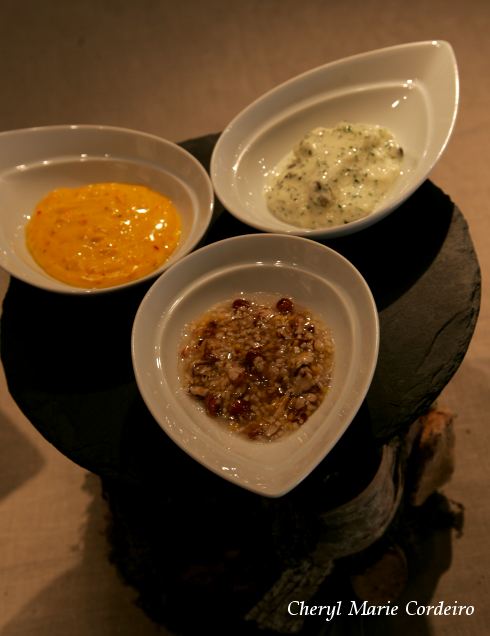 Three dip sauces, one for every cold food item.

Second display was a set of finger foods, the kind served at mingle parties and pre-dinner receptions. The team had prepared four different all vegetarian tapas. Included in the tapas are salt baked celeriac, celery root cream, herb potato chips, bread, sausages on scallops, and capsicums in caraway bread with green pea cream. A set of Aspic of pork with roasted onions and potato chips and anchovy tapas with a salad of carrot, caviar, cucumber, sour cream and red onion. 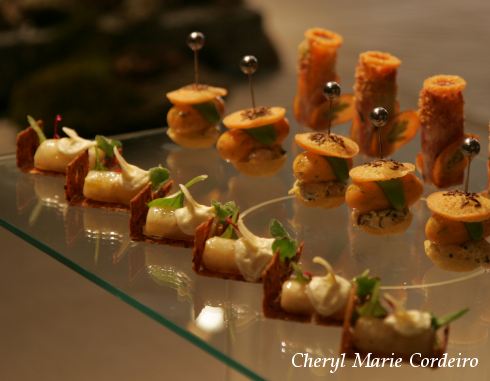 Belonging to one of the three categories for judging, these finger food tapas were strictly for display only! 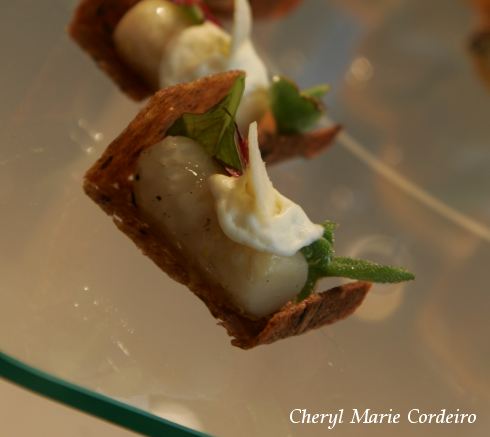 Celery on a cracker. 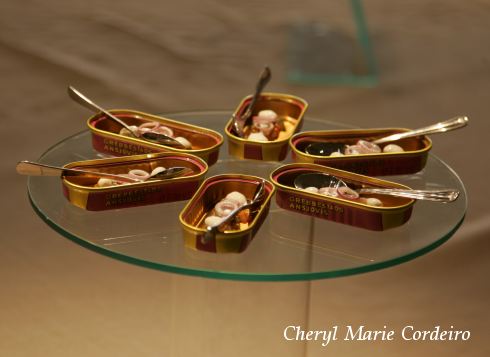 Anchovies served in their own cans, that make the serving and eating of it all the more interesting.

The last section, after the dessert is a set of petit four. The petit four are named after the “small fire” or actually the cooling period of a larger oven used for the main meal. 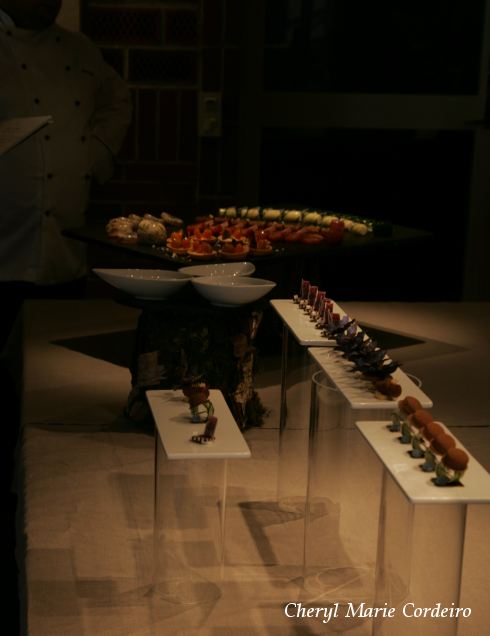 Petit Four, the savouries that await you after a meal. 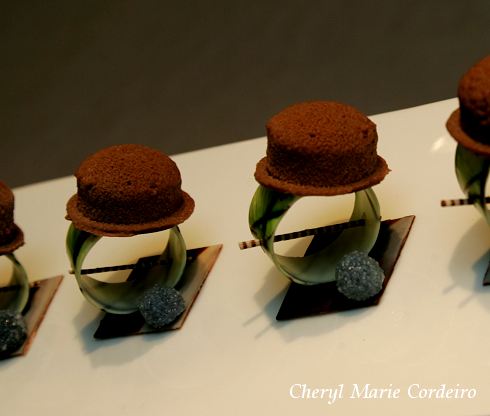 Petit four in the shape of a ring, hat and a stick. 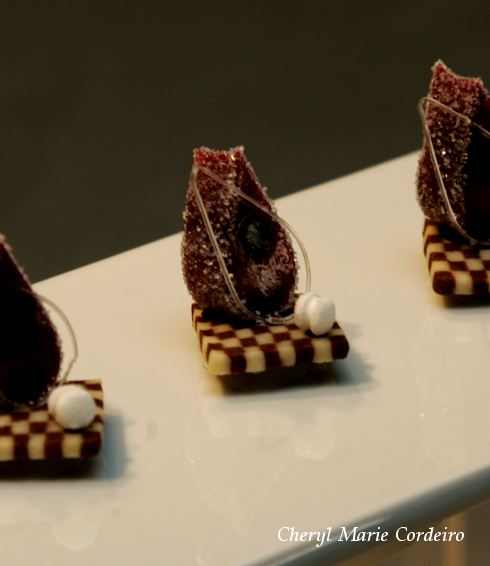 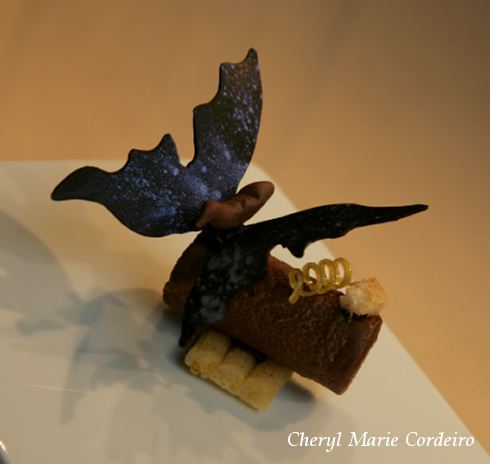 Petit four, an iridescent blue-purple chocolate butterfly, perched on a twig of chocolate.

Of the two complete meals that go into the competition, one is supposed to be completely vegetarian. 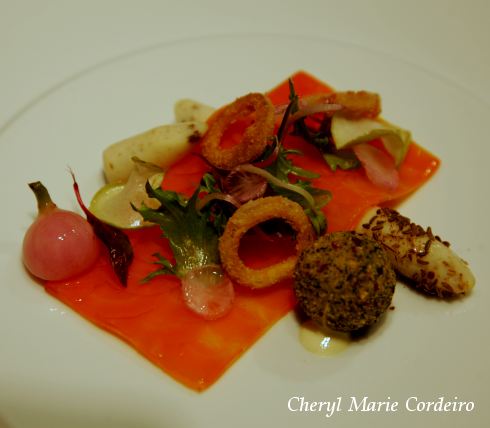 Appetizer; Potkase, cheese and carrot blanket on top of a potato croquette. Salad with apples, radish and onion rings. Vegetarian never looked so good or decorative! 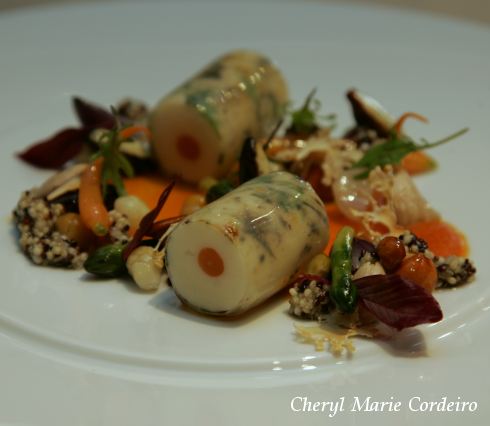 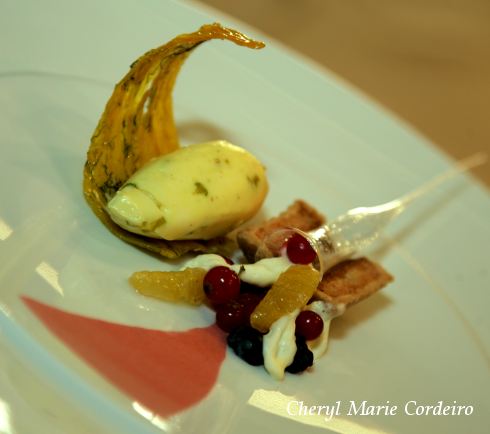 Part of the judging includes consideration of the portion of these five dishes. The food served is measured and weighted not just to the gram, but nutritionally, where people need to be able to consume all five dishes without feeling as if they’ve overeaten at the end of the meal. 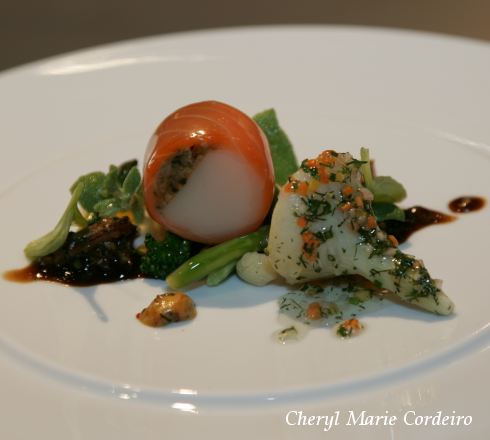 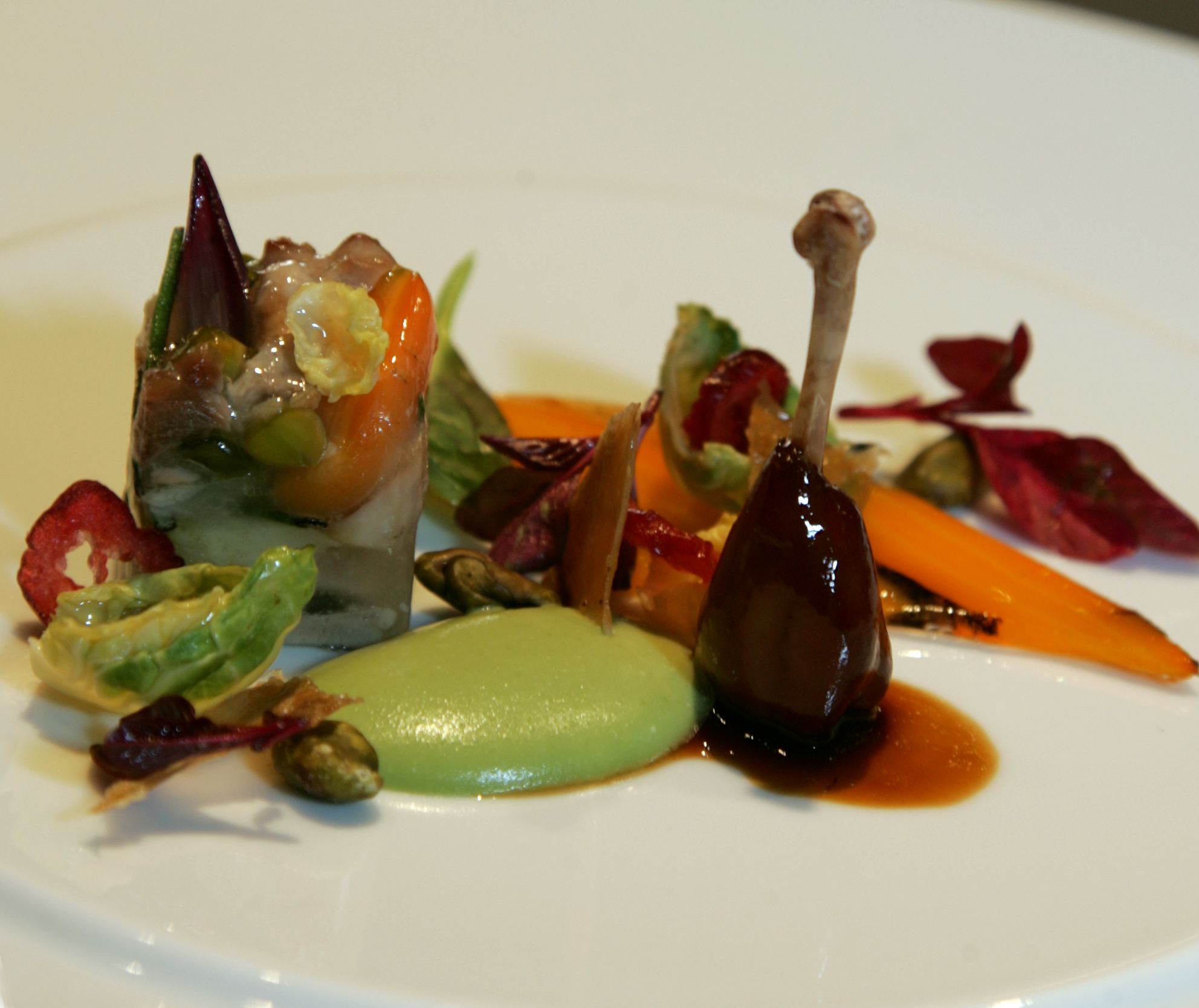 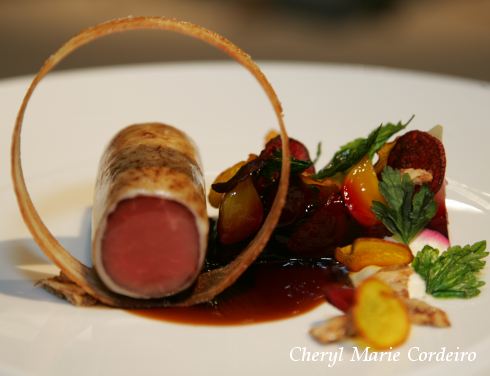 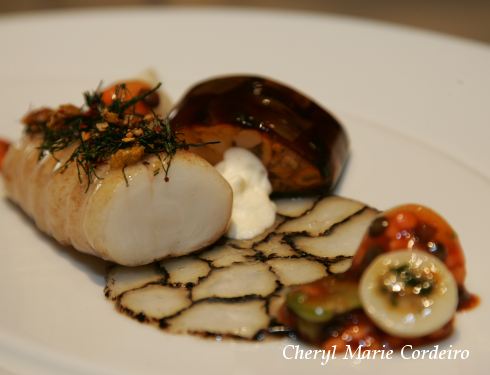 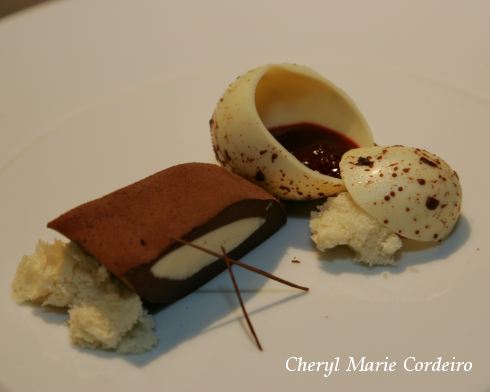 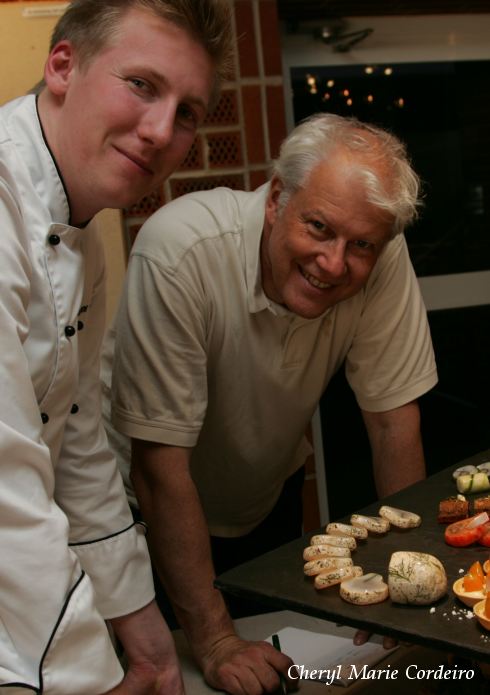 JE with Johan, checking out the Cold Food table display. 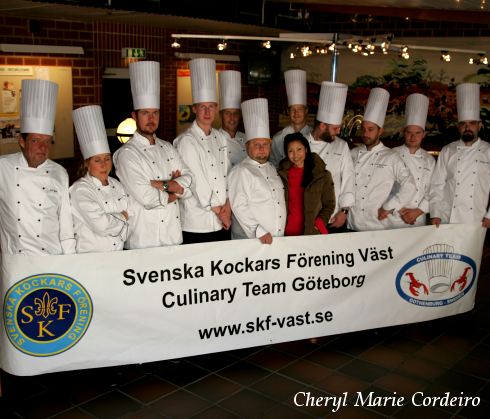 Thank you for the showing, and good luck in Luxembourg!

One thought on “Sneak preview of the Gothenburg table, before the Luxembourg Culinary World Cup 2010”