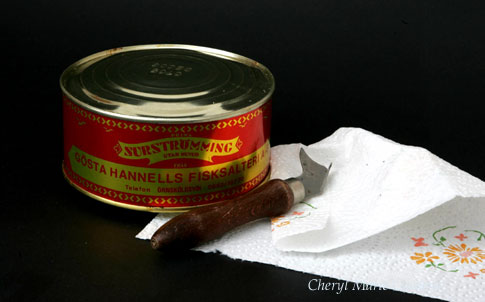 A bulging can of surströmming can strike lust in some Swedes and dread in others. The can of surströmming bulges with the fermentation process and some lovers of this dish would prefer to have it a year after its expiry date. This particular bulging beauty expired in December 2006.

Mention the word ‘surströmming’ or fermented herring to a Swede, and you’ll get an array of reactions that range of disgust to salivate rapture. There is hardly any neutrality when it comes to surströmming; one is either ardent or appalled.

In olden days this traditional northern Swedish dish was a poor man’s meal. It possibly came to be when the lack of salt while trying to preserve it led to its fermentation, with its resulting bouquet. Then eventually as with the bubbles in Champagne, the defect product turned into a desired specialty.

In my years in Sweden thus far, surströmming was the one dish that grew to be a legend with me; I’ve often heard of it but never encountered it. It was always suggested, “You should try surströmming”, but never executed because nobody wanted the stink of the fermented herring in their house. 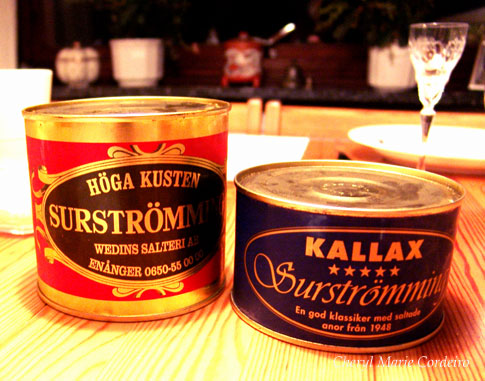 Surströmming come canned from a variety of producers, and can be bought off the shelves in the supermarkets in Sweden. Kallax, the blue can shown above did not fare too well in the consumer reviews this year, as reported by Göteborgs Posten. As can be seen from the flat – not bulging – lid, it was probably just not fermented long enough *tsk tsk*.

Apparently worse than the smell of baking belachan (a variety of Malay shrimp paste), opening a can of surströmming would stink up the entire household and half the street you’re living on. The pungent smell has a reputation of ruining everything from the taste of butter on the table to curtains in bedrooms.

While surströmming is a ‘social dish’ where the more the merrier to the meal, almost everyone I met told that surströmming, if eaten indoors, should be eaten with all windows and doors to the dining room shut and all doors to rooms closed too, so that the pungent odour of the dish would be contained.

Needless to say it is difficult to eat surströmming when living in an apartment, since within a few minutes of opening a can, you’ll hear neighbours clamoring to ventilate their apartment. Some might even suspect there to be a dead rat somewhere in the ventilation shafts. On the other hand, after the ruckus subsides, neighbours in the know and who are fans of the dish, will silently come knocking at your door to be invited to the meal perhaps bringing an extra bottle of aquavit as a consolation gift. 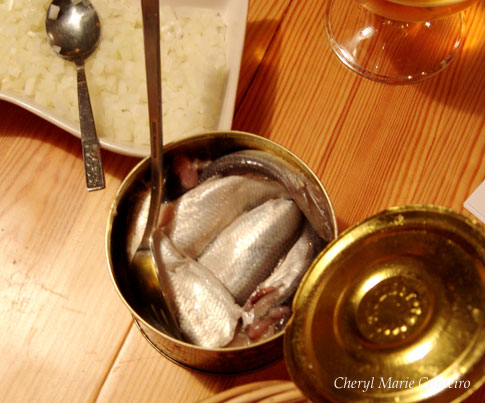 An opened can of surströmming.

From description and hearsay, I gathered that the fermented stink of surströmming was more potent than that of the durian fruit. Intrigued, I began to find the whole experience of eating this dish promising. So when the opportunity arose to try surströmming with good friends of ours, I was quite excited. I wondered if I would love it or hate it.

A pungent odour indeed arose when the first can of surströmming was opened. There was no smell of ammonia, for which I was grateful for and for that reason, found it more bearable than expected, and after awhile, the smell was all but forgotten. 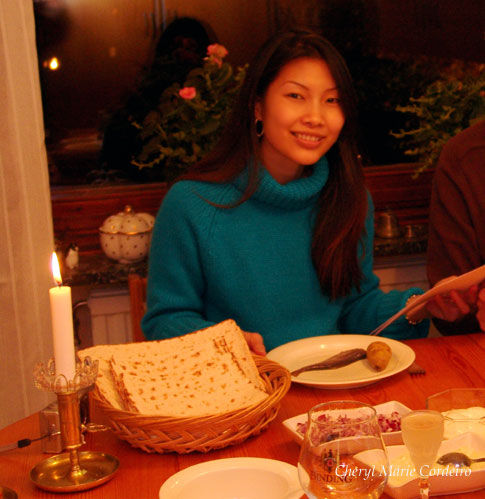 Surströmming is a social dish where people often spend hours at the table filleting the fish and putting together their own favourite sandwich combination of condiments. In my hand, a print out of songs, to be sung during this surströmming dinner.

The fermented herring looked slick in the can. For die-hard fans of surströmming, the can of fermented herring is best eaten a year after its expiry date. Like a good wine that ages with the years, the herring should be left to take its time to come to a ripened fermented state. In time the fish would eventually disintegrate in the can, leaving nothing to consume. Then and only then it would be considered slightly overripe.

About half of the herrings, the females, come with roe, and this is a prize to the true surströmming lover. It’s considered rude to rummage the entire can to pull out only the ones with roe in them so this is generally done as discreetly as possible. Anyone who pulls out a fourth consecutive roe-filled herring with a ‘oooh how luuucky I am’ will however see a lot of unconvinced faces around the table. 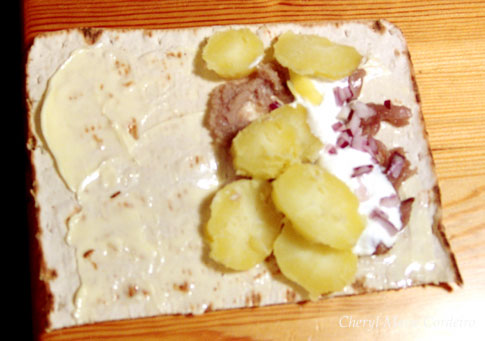 A surströmming sandwich roll in the making.

The herring in the cans come whole and one has to fillet the fish before eating. Condiments usually found on the table with fermented herring include finely diced red onions, crème fraische (a soft whipped cream), butter, bread and small potatoes. 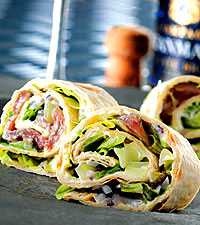 Left: A variation of the surströmming roll. This recipe’s by ICA, one of Sweden’s largest food chains.

There are several ways of eating fermented herring, where the most common is to eat them with potatoes. This is closely followed by a popular version of fermented herring in a sandwich, either on thin hard bread or on thin soft bread that can be rolled.

Filleting the fish could prove tricky, since all small bones and skin are to be removed before eating. I gather I wasn’t too successful on my first try with this since I ended up eating bones, skin and flesh alike in my sandwich. But my technique improved as did my sandwiches as the evening wore on.

In my Asian-Scandinavian repository of flavours, where lightly cooked cockles are found in Singaporean dishes such as laksa and char kway teow (fried flat rice noodles), the closest I can compare the taste of fermented herring to is salted raw cockles. Its bouquet, I would describe as something similar to a pungent French cheese or comparable even, to the aroma of the durian fruit.

The verdict? I loved it.

The phrase that oddly comes to mind is that fermented herring as a dish ‘warms the cockles in my heart’. And to share a tradition that has lived with my north Swedish husband from when he was young, is perhaps the most heart-warming of all in this entire meal experience.

One of my favourite Swedish songs, dedicated to the surströmming:

One thought on “Surströmming, a traditional Northern Swedish dish”