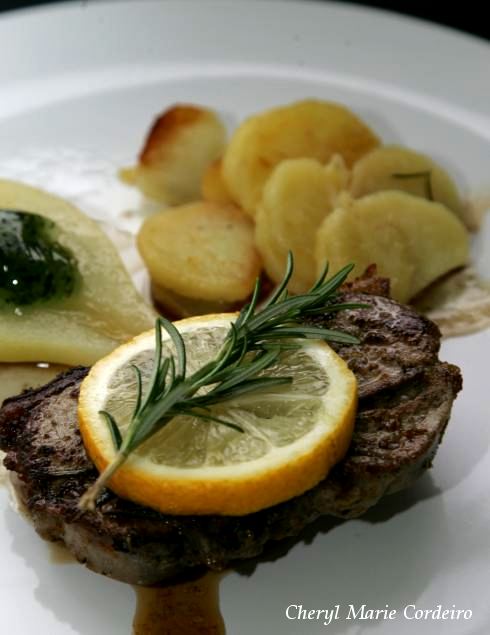 Just recently I was looking for inspiration in the local food store, when suddenly some of the best cuts of lamb cutlets I have seen in a long while stared me in the face. So that was easy. Nice, thick and juicy cuts from the lower back and with the filé left in place. Perfect.

I always find cooking lamb a bit of a challenge. However we look at it, lamb is far from an everyday dish where we live. In Sweden it’s a traditional meal that belongs to the autumn and winter season and to have lamb is a little event in itself. Because of this, there are a lot of unspoken expectations surrounding these meals. One of which is the hope that it will turns out good, another the fear that it will not.

However, since this dish worked out fine, I will share what we did, not the least so I will remember it myself.

First of all, there are many traditions in which to cook lamb and ours was inspired by Italy and Greece, as in lots of garlic and olive oil, and only a vague idea about keeping tabs.

Fresh rosemary
A few years ago we also invested in a properly hardened rosemary bush. Not one of those anemic supermarket spice plants but a real one. Every year we carry it in and out from the garden in its pot, in a similar manner as we do with the summer garden furniture. A little bit like letting out the cat but while our cat wants in and out several times a day, the rosemary bush will only do ‘out’ once every spring and ‘in’ once every autumn. 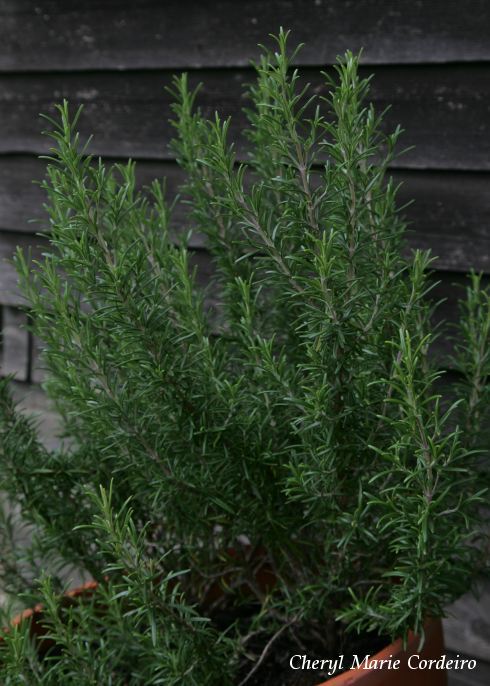 By now our rosemary bush looked healthy enough to withstand some pruning.

Since I particularly despise eating raw potatoes with overcooked meat or vice versa, this meal took some planning so that all dishes would be done at pretty much the same time.

Marinating the cutlets
First thing to do was to get the meat going since I wanted it marinated. I brushed on the marinade and left it at room temperature for about one hour. 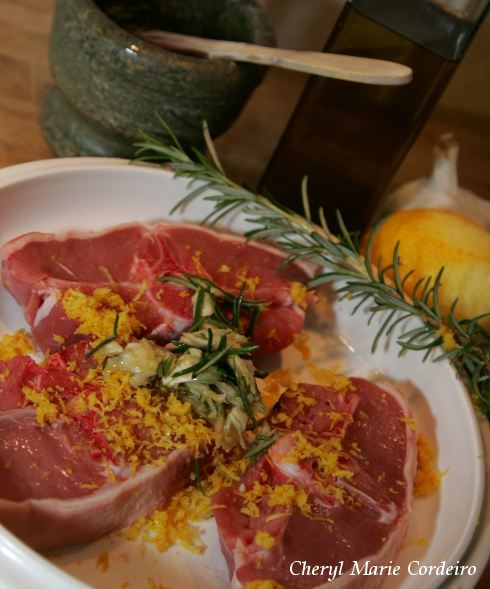 The marinade I chosen is consistent with an Italian theme with three bashed garlic cloves mashed together with a handful of fresh rosemary leaves, the zest from half a large lemon and all this mixed with some olive oil. Some fresh black pepper and salt.

Stir fried potato slices
Second, was dealing with the potatoes. This time I was experimenting with a hard boiling variety called Asterix, that I peeled and cooked until they were about half done and then turned them into slices. I then fried them in a mixture of even parts butter, olive oil and lard. Butter for the flavour, olive oil to put a bit of Mediterranean flavour to it and lard, since it withstands heat very well, and you can get a very good and crispy surface on the food in this way. I actually think most food fry better in lard then in anything else, but this mixture is a useful one for anything that does well with a hint of barbeque. Together with the potatoes went one large – bashed – garlic clove and a few sprigs of fresh rosemary. 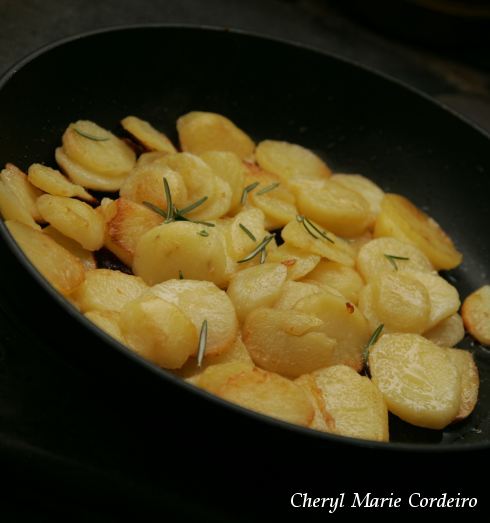 This time I actually pre-boiled the potatoes until they were about half done before slicing them up and frying them in a mixture of even parts butter, olive oil and lard.

Different ways of adding garlic
There are several ways of adding garlic to food and sometimes I hear people wondering if there is any difference in taste depending on how you do this and yes, there is. Garlic is a powerful ingredient that can go from hot to mellow depending on how you treat it. Boiling whole cloves turns garlic mellow while crushing, brings out the fury. In general I use large, bashed pieces while frying and for adding just a hint of garlic to a dish. While making for example a tomato sauce crushing, with its more intense flavour would be fine.

Pears as side dish to the lamb
With the main dish settled, I had for a while ogled a pear tree in our garden that could supply a side dish. 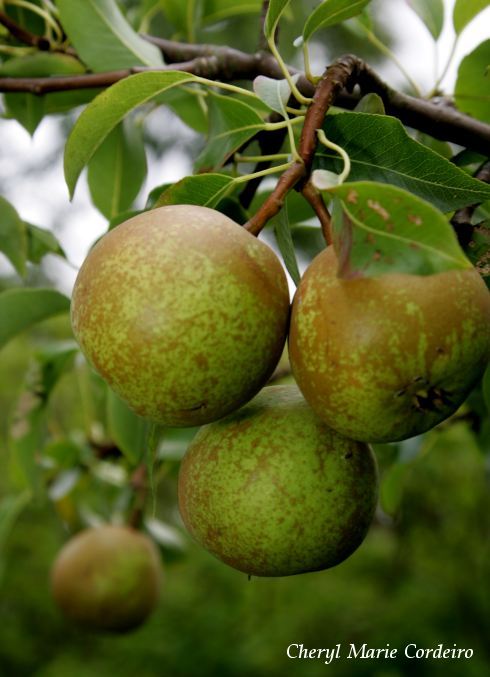 Pears, as a side dish. 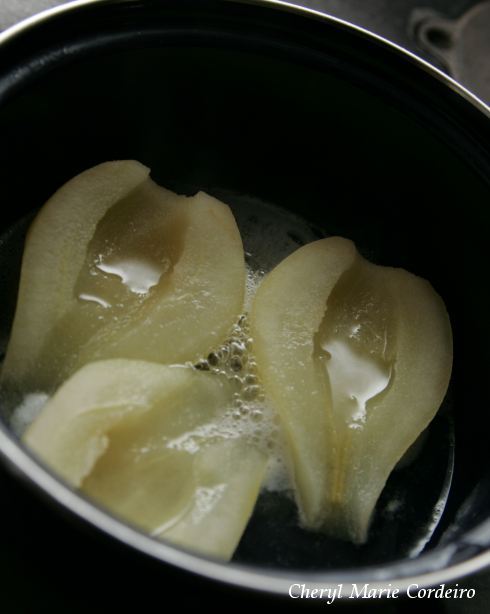 Wine braised pear halves
As for the pears, I sped up the cooking by first running the peeled halves in the microwave for three minutes. Then moved them to a pot, drizzled some honey over them, added a generous squirt of lemon and a solid dash of some Italian white wine and let them simmer. 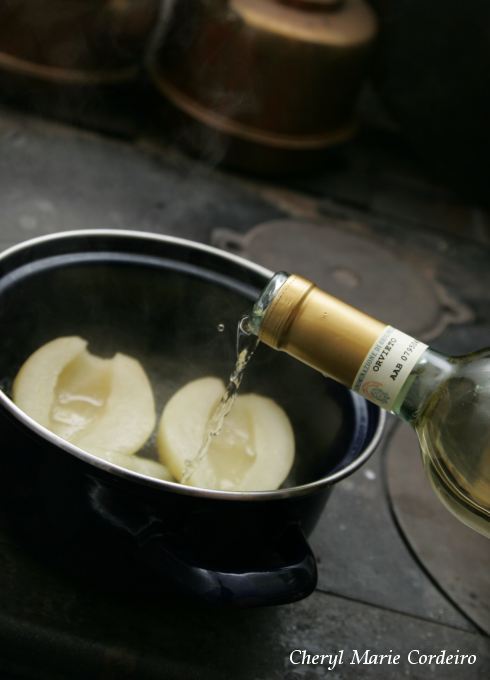 As for what wine to use, the great chef and tv-personality Keith Floyd once said, if you don’t want to drink it, don’t cook with it either. 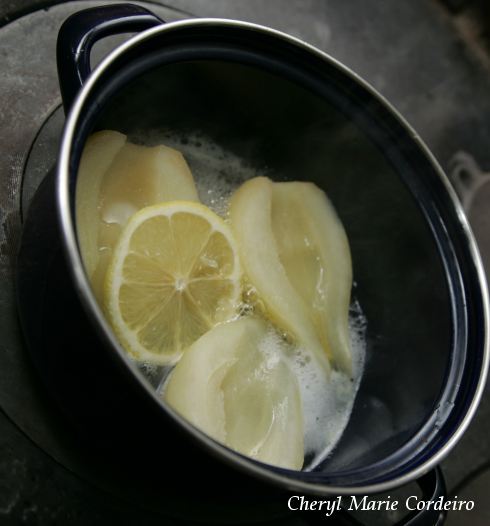 Time to get the meat going
The lamb cutlets were finally due and I just fried them to golden brown on one side at a time in the same kind of sizzling hot mixture of butter, olive oil and lard. A few minutes on each side, then lower the heat and let cook slowly on low heat for about ten minutes. This should give you a soft cutlet, on the rose pink side, and with a nice crusty surface. 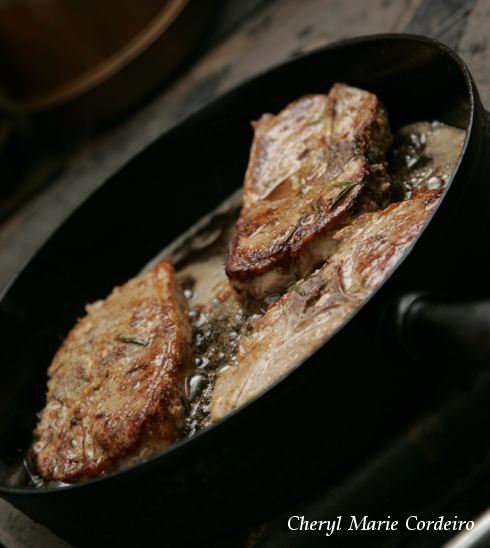 Sauce – sometimes the easiest is the best
For a sauce I whipped out the frying pan with the left over spices from the marinade and some meat stock, and then strained the whole thing back in a sauce pot. A word of caution here is to go easy on the stock so it doesn’t overpower the rather mild lamb. If you are lucky with this, this sauce will retain some of the minty overtones from the fresh rosemary.

Putting together the meal
Now time to assemble the whole meal. The lamb will be even better after a few minutes of rest and the sauce and the potatoes should be warm enough for the dish to be warm when served.

Top off the pear halves with a dollop of mint gel, and serve. 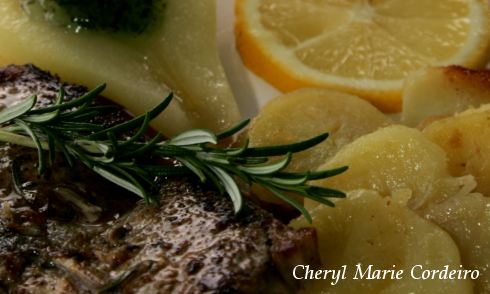 There were one trick left, that I did not pull with this meal for several reasons. Actually, the pot in which I poached the pear halves did contain some pretty cool fruit, wine, lemon and honey juice after the pears were done and generally it is good economy to scoop up everything leftover after the cooking and turn that into a sauce, but sometimes it can be too much of a good thing too.

The second reason is, that it is can be plain embarrassing to see grown up people lick the plates.

I leave this to be decided at the occasion.

One thought on “Rosemary Lamb Cutlets with wine, lemon and honey pears”