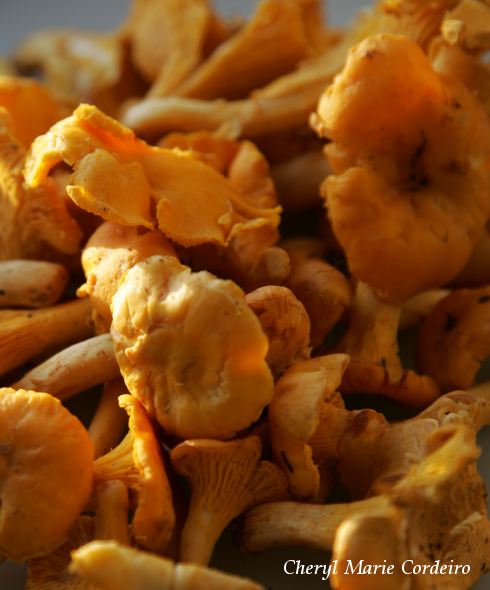 The golden Chanterelle – meaty, fragrant and perfect in a dollop of butter and cream!
Photo © J E Nilsson and C M Cordeiro-Nilsson for CMC 2010

There is in particular one mushroom in Sweden that is most popular with amateur mushroom pickers – the Chanterelle mushroom. This yellow-gold treat of a fungus is freely available in the forests during autumn for anyone who bothers to go out to find it, and for the less adventurous of us, it’s available at the wet markets and in the grocery stores for purchase.

Autumn is the season of Chanterelles, where you can find them lying hidden and camouflaged among the piles of fallen autumn leaves. Deliciously edible, this mushroom is easily recognizable by its rich yellow colour, its flat umbrella top, long ribbed stem and characteristic fragrance of something in-between flowers and forest after rain.

Its subtle flavour goes splendid with an omelette or almost anything with meat. There is only one catch though, this modest little forest being is surprisingly difficult to cook.

There are lots of recipes out there and many suggest long frying and combinations with for example onions. Most of these I am afraid, would rather spoil or hide the true value of the Chanterelle. 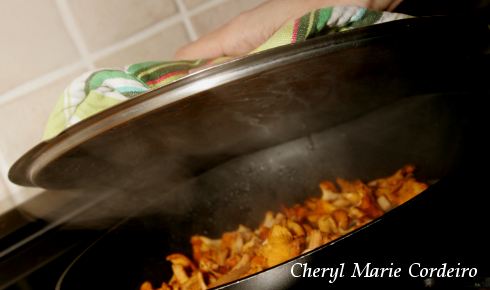 A fantastic fragrance hits your senses.

Just lifting the lid of a pot and smelling the fantastic fragrance that hits your senses tells how much of the mushroom flavour evaporates during its cooking, all of which we actually would want to keep. So how to combat this possible loss of taste and flavour, and get the most out of our mushrooms?

Traditionally butter and cream are used to capture the delicate scent of Chanterelles during cooking. The flavouring agents in Chanterelles are both water soluble and so subtle that they can actually evaporate. To combat this I settled for slow cooking the Chanterelles under a lid together with a few dollops of butter. 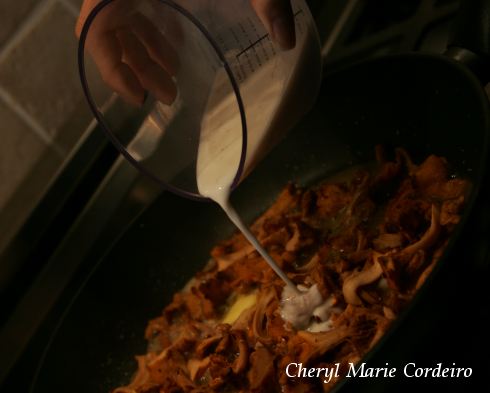 Traditionally butter and cream are used to capture the delicate Chanterelle fragrance.

After about five minutes, a peek under the lid revealed moist Chanterelles bathing in melted butter. Now instead of frying these poor delicate things to death as quite a few recipes would recommend while letting their flavour evaporate and then replacing it with onions, I decided to cut it right here and instead – stir in a mixture of 1 tbs wheat flour, 50 ml of cream and 200 ml of milk. I added a quick dusting of white pepper and salt and turned the whole dish into a light stew or a white cream sauce. 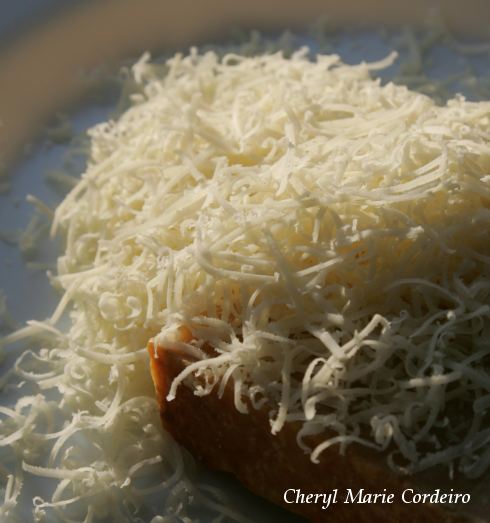 Since I intended to have this sauce as a side complement for an Italian inspired meat dish, I felt that some shredded parmigiano cheese would be a perfect addition. Parmigiano is unique in that it melts and blends with most anything without any threads, and is also a natural flavour enhancer. 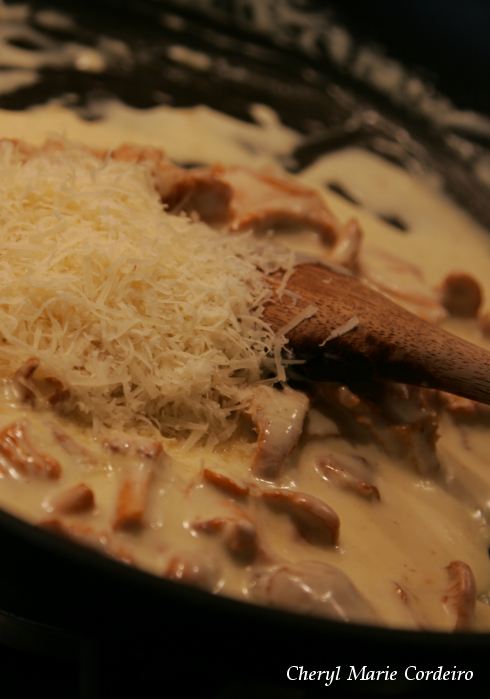 Shredded parmaggiano cheese melts and blends with most anything and is also a natural flavour enhancer.

As a last consideration, a quick dash of an excellent brand of single malt whiskey, is what I would recommend to anyone who loves and appreciates a good whiskey. It rounded off this sauce to just about the right note, adding some vigour to it, helping the sauce stand up to its intended counterparts; a hefty chunk of dark meat and a solid red wine. 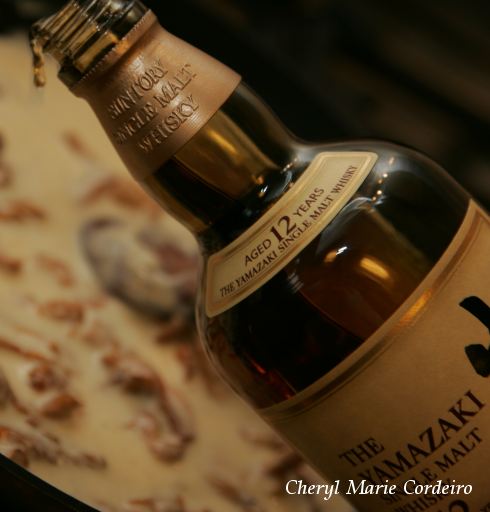 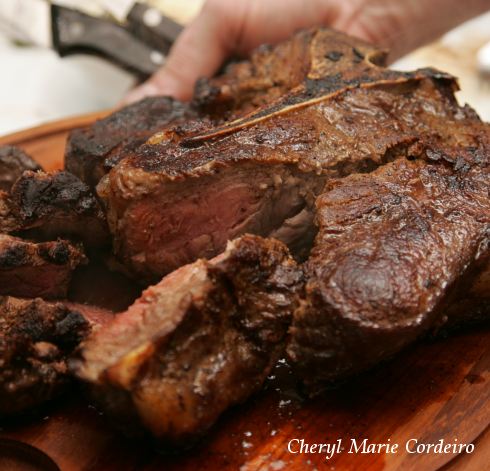 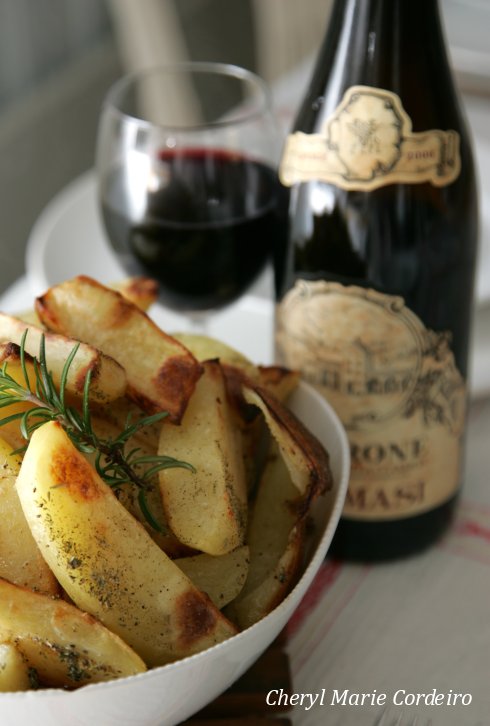 These potato wedges were oven baked and seasoned with salt, pepper and a hint of rosemary.

Trying out a couple of different wines together with the food is also part of the fun for us, and while we first thought a really good Chianti would be a given thing for our steak, we found that nothing, absolutely nothing at this time could beat a 2006 vintage Amarone. 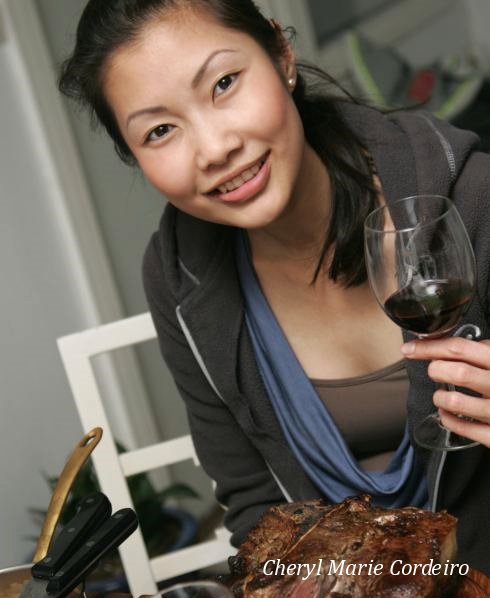 Personally I think these Chantarelles turned out well to its intended purpose and the guests seemed happy. So I’d welcome anyone to consider any of these ideas the next time you try for a mushroom sauce.