Meeting with Dan Berntsson, the “Potato-Guru” 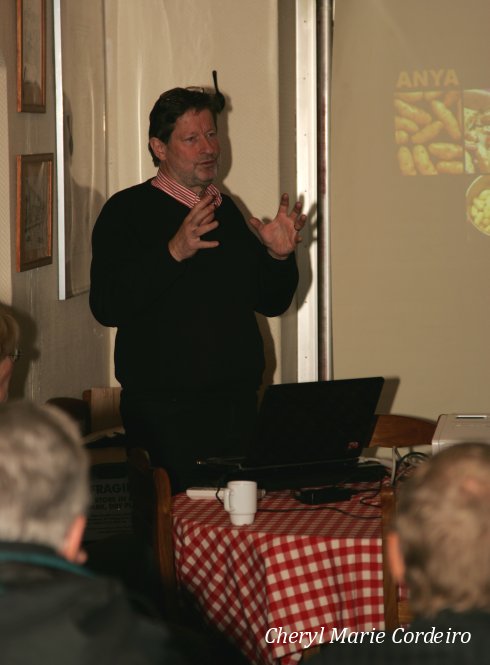 The weekend’s culinary adventure was directed towards one of the most common staple root vegetables in the world, the potato. Admittedly, when the Invite to a Master Class on Potatoes by Sweden’s foremost expert on potatoes, Dan Berntsson, landed in the mailbox, I wasn’t exactly all fired up in terms of enthusiasm, but I’m always one for new adventures, so I signed up. As it turned out, there was a lot to learn about potatoes, in fact, much more fact and information than one could process in the four hours allotted to class. 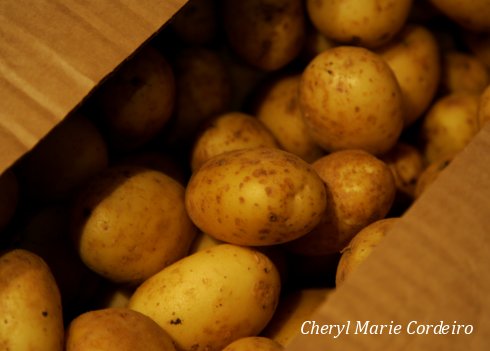 Inova potatoes, a firm variety. We actually brought home the whole box of this variety to continue the experiments at home.

We were greeted on premise by several deep green paper bags of potatoes of different varieties, some numbers of potatoes were even in boxes on the side tables and on the ground. The sight of these bags of potatoes ignited my interest for the subject, since potatoes being one of the most versatile of eco-friendly food, I became curious as to what these potatoes were good for i.e. baked, mashed, fried, steamed, boiled, grilled etc. 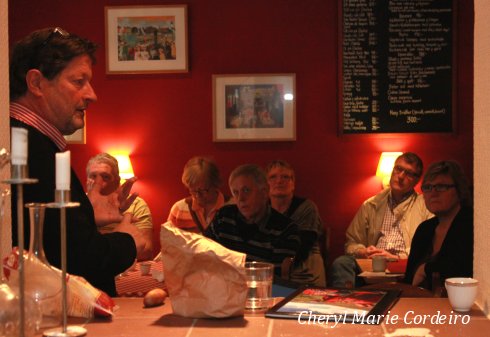 Dan Berntsson and to the right in the picture, Anders Arnell, friend, author, tv profile and professional food edutainer.

If Dan had a personal favorite variety of potaties, that would be called Anya, which we actually got around to try about a year ago, from a gourmet foodfair.

Dan, who’s widely known in the Swedish food and gourmet circles as the potato-guru, first explained that the ease at which potatoes grow meant that the varieties of it have become almost infinite. At this session, we were introduced to about fifty sorts of potatoes, those that were commercially viable and so widely spread in Sweden alone that they actually had a name and market shelf space. Most other varieties actually only have a number, a system and philosophy of organization quite the opposite of Chanel’s luxury parfums tagged No. 5 and No. 19. 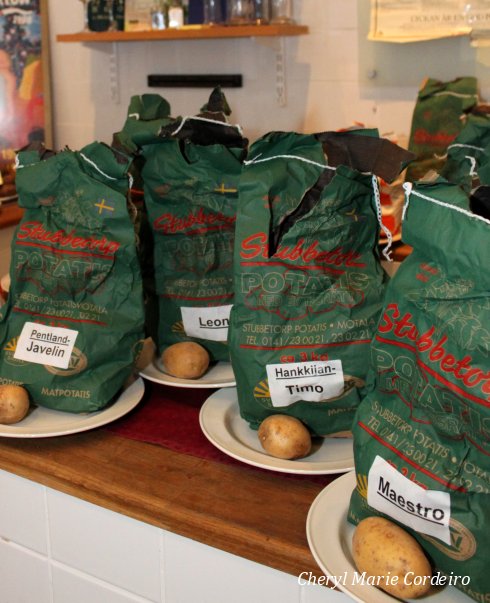 Some fifty different varieties of potatoes were exhibited. It was surprisingly difficult to tell the difference between some, while others were total surprises, such as pink, red and sometimes completely blue potatoes! 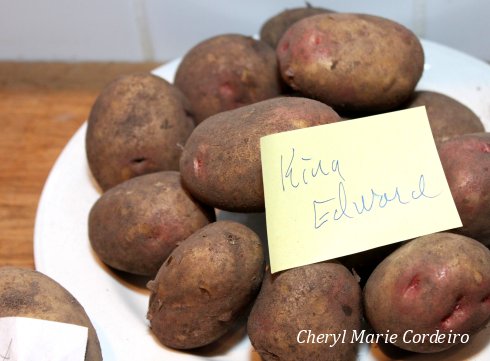 The most classic of them all. King Edward completely dominates the market as a nice, uncomplicated, versatile and soft cooking potato. Many professionals are not too impressed by the “King Edward” since from the potato connoisseurs point of view, it is tasteless and in many ways “uninteresting”. This might not seem fair thing to say though, about the most popular variety of them all but from a professional point of view, it might display a lot of features you might not want in the potatoes you work with. 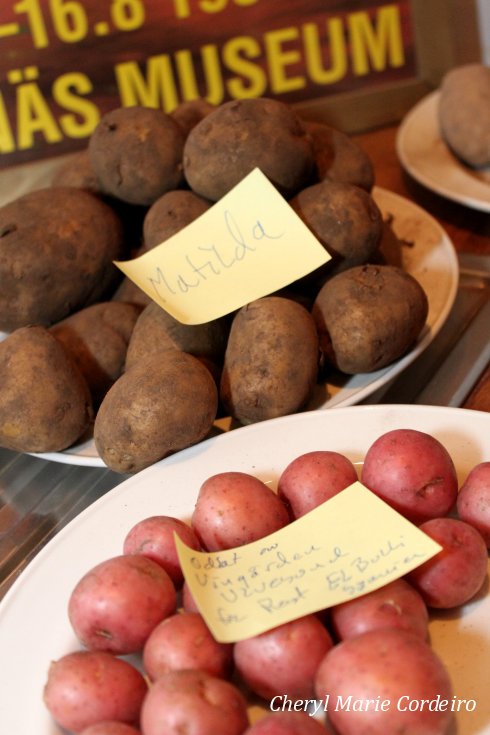 Potatoes are cultivated, to the point of being engineered, like the industry-produced Asterix for French Fries, to fit a wide variety of purposes. Some are cultivated to produce potato flour and starch, some are cultivated to make the perfect mashed potatoes, boiled, fried, made into gratins etc. And they are all stunningly different in texture, quality and characteristics. Some potatoes are harvested early in the season and some late, thereby producing or encouraging different sorts of potato dishes at the dining table. The success of a dish where potatoes would be involved would thus be entirely dependent upon the selection of the right kind of potatoes.

And this is something I’ve been acutely aware of since I once completely ruined a meat dinner by just popping down to the local grocers and came back with a red-skinned, fairly nice looking potato that I immediately set on boiling that after about half an hour, still appeared to be raw.

I considered all kinds of possibilities as to why the potatoes were still raw after half an hour under a simmering lid, including that at the time, we were all at a ski resort in the Alps, that the lower air pressure could have caused the boiling time to be longer? Or that heat was escaping the pot in some way I was unaware of etc?

But no. The simple explanation was that I had come back with, the Asterix. The potato developed to specifically produce the perfect French Fry and best only when deep fried. Its peculiar characteristic being that it will appear raw and hard in the middle almost no matter how long you boil it. 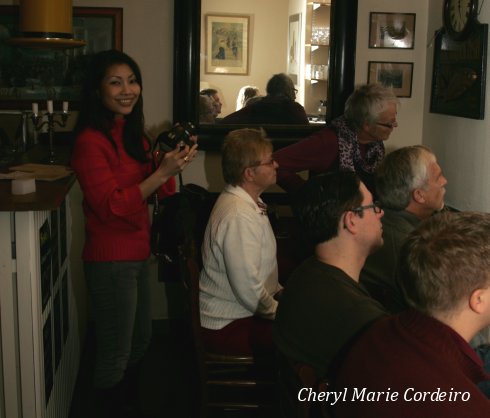 It used to be that I sat in front rows at classes, these days, it’s me at the back of the class.

As winter approaches, we were also considering storing potatoes in some dry, shaded corner of our house for keeps. But Dan was quick to point out, as opposed to wine, potatoes do not benefit from the process of aging, whether stored in a wood casket or not. From the moment it comes up from the soil, it is downhill with the quality. However, a potato can store at 5-6 degrees centigrade for upwards of a year. The best month for harvest, if there would ever be a potato day, as there is a Cinnamon Roll day, etc. would be somewhere in October, which is actually right now. 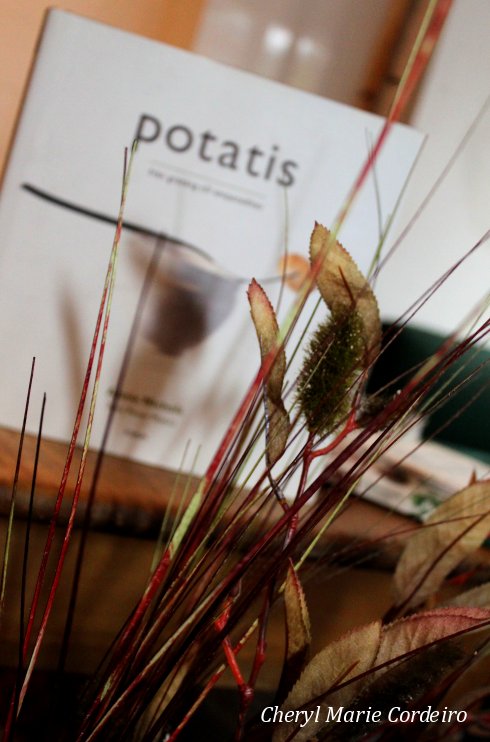 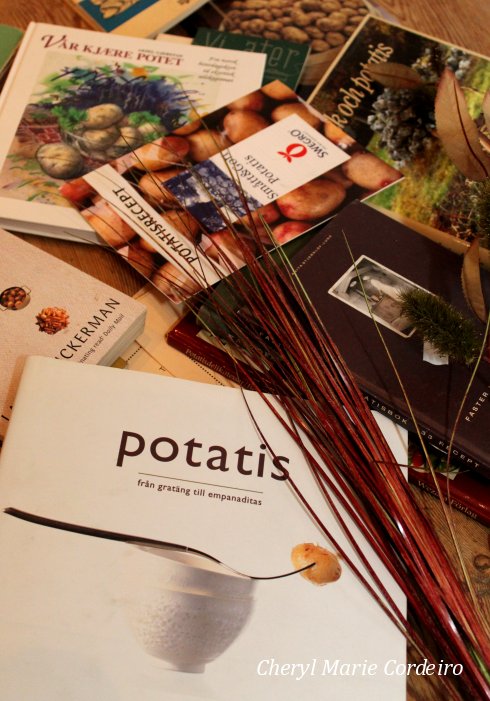 We were also greeted on premise with numerous books on potatoes, mostly written in Swedish. 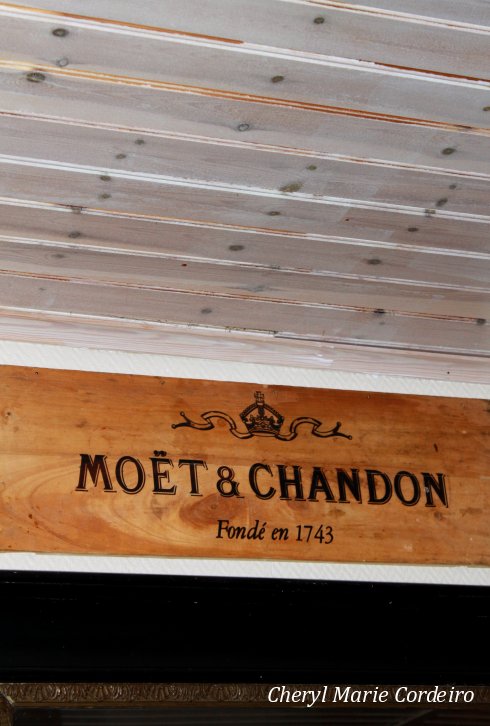 The class was held in a restaurant that used to belong to Mikael Sande who owns Matsmak, the restaurant. His culinary work can be viewed in the post on Dinner for my Doctoral Graudation Party. 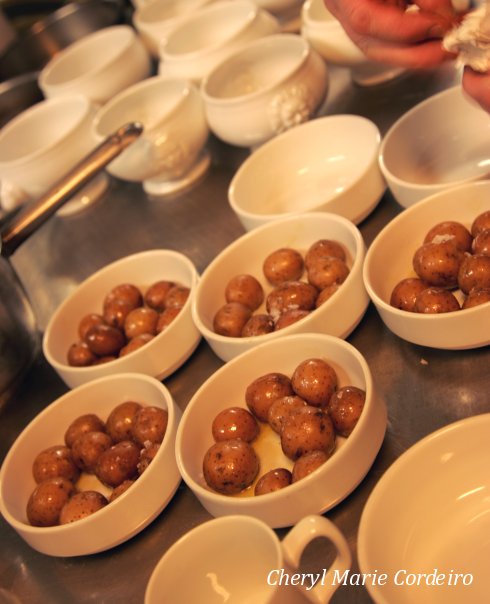 A sampling of Cherry Potatoes, a naturally small growing variety. Quite tasty as they were boiled and served with sea salt and butter in one of the test runs. 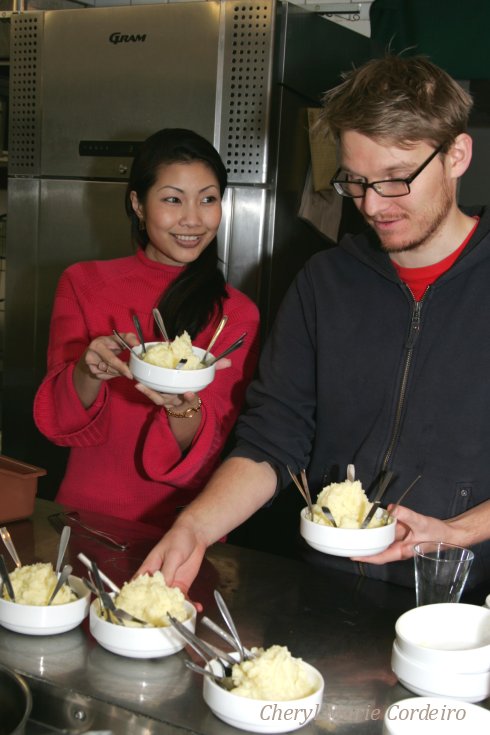 Helping bring out the mashed potatoes for the second taste round.

The potato originally seems to have come from the South America, originally near today’s Chile or Peru, where it seems to have been cultivated as long as 10,000 years ago. Today potatoes have become an integral part of much of the world’s cuisine and are the world’s fourth-largest food crop, following rice, wheat, and corn.

It was introduced to Europe by Spain in 1536 and was subsequently conveyed by European mariners to territories and ports throughout the world. Once established in Europe, the potato soon became an important food staple and field crop. Potatoes remain an essential crop in especially eastern and central Europe, as these beautiful pictures from the International Year of the Potato 2008 show (see also Peru, Spain and Belarus). While the most rapid expansion over the past few decades has occurred in southern and eastern Asia where China has now emerged as the world’s largest potato-producing country together with India, where nearly a third of the world’s potatoes are harvested annually from these countries. 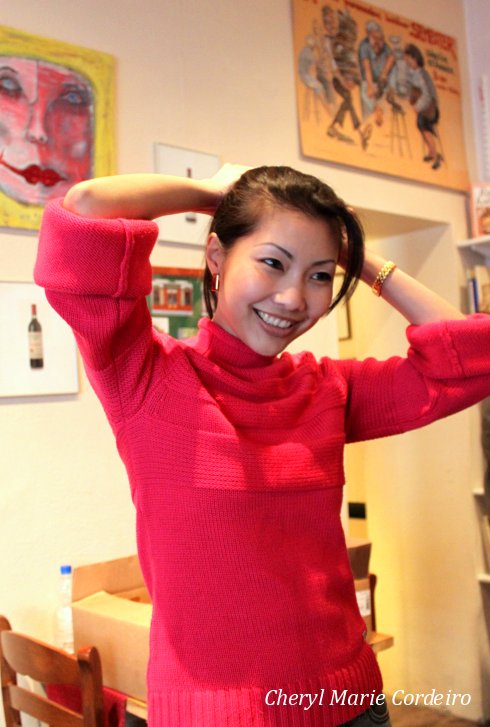 An increase in general public awareness of the potato as a golden food resource is the goal of the UN Food and Agriculture’s research and development initiative, where 2008 was declared the International Year of the Potato. Potatoes are indeed eco-friendly and as a food crop, contribute greatly to world food sustainability and development. 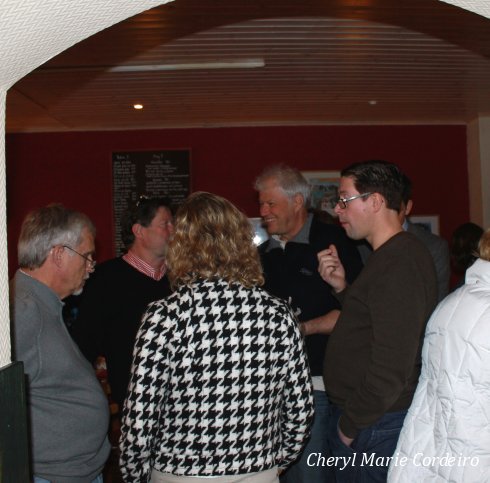 JE Nilsson having a chat and laugh with Dan Berntsson. 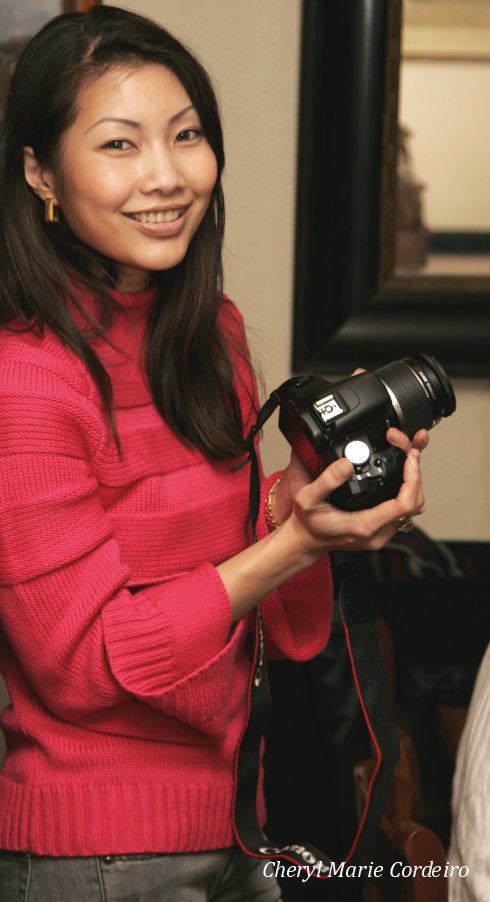 As it turned out, there was a lot to learn about potatoes, in fact, much more than one could process in the four hours allotted to class.

And after this session on getting to know potatoes, I understand why French Fries even in a highly standardized food chain such as McDonald’s can soggily fail in Venice, Italy and be crisp par excellence in New York, USA, because as Dan said, “a potato is not just a potato”.

3 thoughts on “Meeting with Dan Berntsson, the “Potato-Guru””