Filé mignon on a mirror of red wine sauce 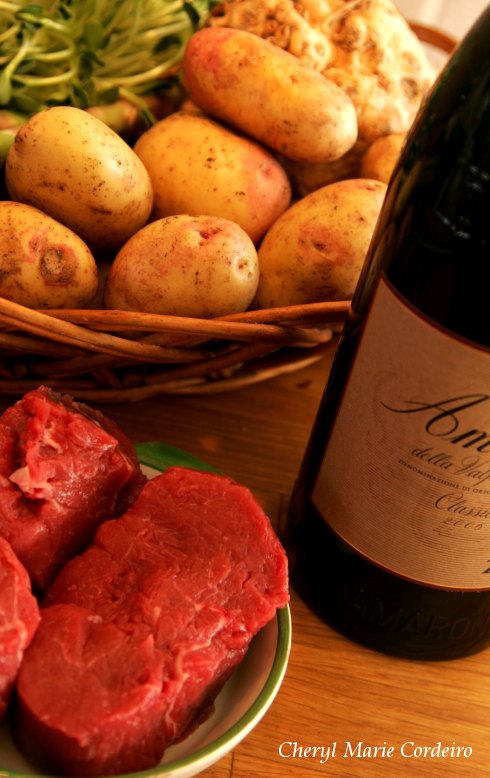 Just back from exotic Shanghai, Hangzhou and Singapore, from a balmy 28C to a -10C outdoors here in the Nordic winter with chilly winds. No doubt, the snow covered land and the white Christmas upcoming is festive and promising, beautiful in its own way, but hardly warm.

So something to go with a deep, full, red wine sauce that warmed body and soul was what we craved. One that would stand up against a good cut of beef as an alternative to all those parsley and pepper sauces. And to that full bodied red wine sauce and a good cut of beef, I wanted a mashed root celery puree to see if the combination of flavours actually worked well when served together. I had an idea it would.

A visit to the local food store supplied the ingredients for today’s dinner that was teeming with ideas. The root celery was easy enough to boil and mash, to which I then added in some King Edward potatoes, a soft cooking kind of potatoes, utterly suitable for making mashed potatoes since that is what it becomes by its merry self if left boiling on the stove for only just a few minutes too long. A few pieces of beef of the filé mignon cut and some sunflower sprouts for a fresh green salad. A bunch of fresh green asparagus looked too tempting not find some use for them…perhaps they could go with wrapped baked bacon? 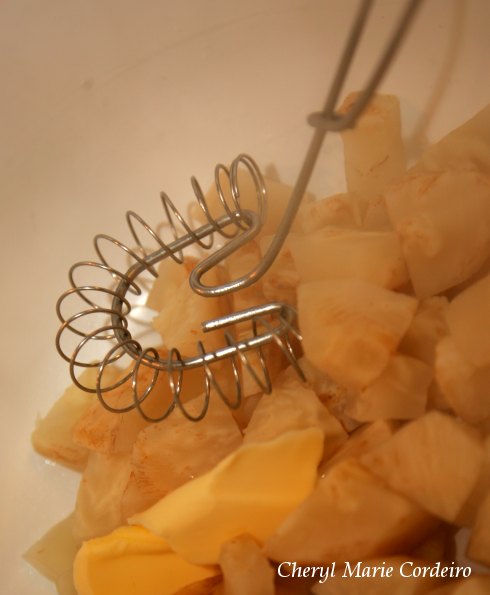 Pommes Duchess with a dash of Root celery

I began with peeling the root celery and cutting them into small cubes, since celery will need about double the time as the potatoes to soften, smaller is better in this case. Set them on to boil. Then I peeled the potatoes and set them to boil too. When the celery was soft I mashed them first of all. With this done I added the soft cooked potatoes and stirred the whole thing together with some white pepper and about 2 tbs butter and a few dashes of the water the roots had boiled in. The reason I worked this in two stages is that the celery might be difficult to mash and the potatoes will become gluey because of the starch if you work it too much. 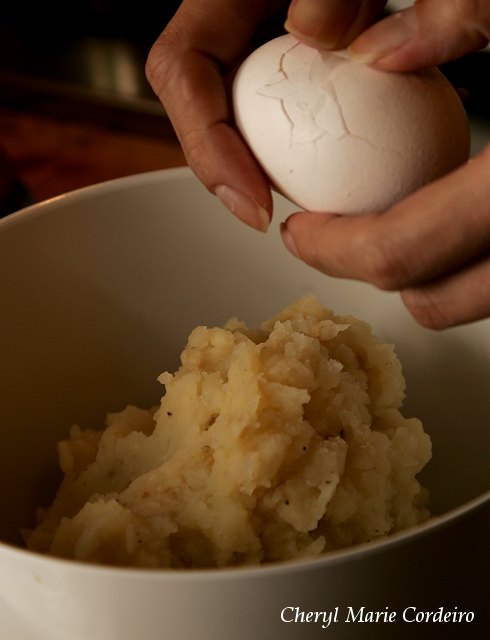 One egg, to add a golden richness to the mixture.

Then I added one egg, some salt and white pepper and stirred the whole thing together. Maybe some shredded parmaggiano cheese would be nice added to the mashed potatoes but I passed on that this time. I scooped up the mashed potato mixture in dollops, placing them in an oven safe dish. In the center of this dish, you can add the asparagus and some bacon rolls for decoration if you like. All of it is actually cooked and you just want to add some spunk and color to the potatoes. 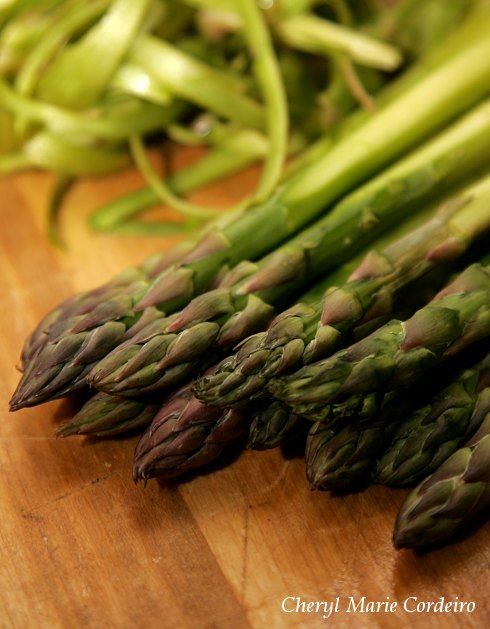 Luscious purple green tips of the asparagus adds colour to any dish.

During this process I cut of the bottom parts off the asparagus and boiled them in a little bit of water with a tablespoon of butter. After some 5 to 10 minutes they should be done. Drain from the water and let dry. A few slices of bacon would be nice, at least two per serving. 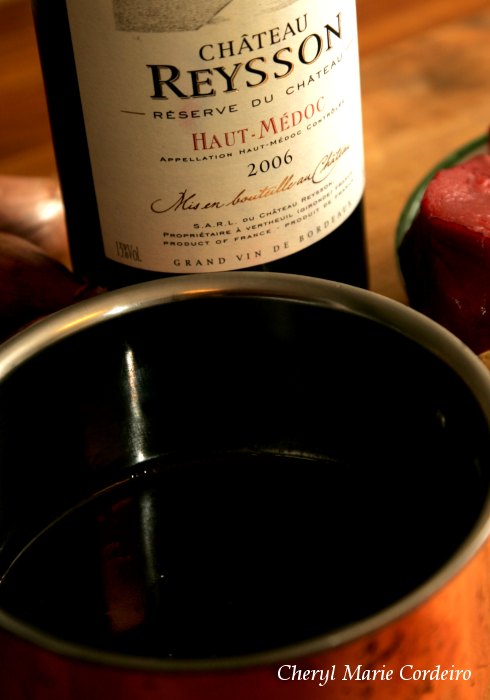 The sauce I made is a variation on Sauce Bourguignon minus the mushrooms that goes into the Sauce Bourguignon. The way I made my sauce was by beginning with stir frying 1-2 chopped shallots in butter and then gradually adding about one cup of wine. Then I added 1 tablespoon thyme, 2 bay leafs, some parsley, some black pepper and about half a meat cube. Then I tasted the whole thing, added about 1 tbs honey for a fuller taste and some arrow root to help with the thickness. The result was a full, rich flavour that it will be a miracle if I ever manage to make again, but I can say that the true secret of making this sauce turn out nice, is the wine. There is no helping here. If the wine is plonk you will have a plonk sauce. Personally I used about a third of a bottle of a Haut Médoc 2006 based on half and half Cabernet Sauvignon and Merlot. Admittedly all did not go into the sauce. You need some for inspiration too, during the cooking. 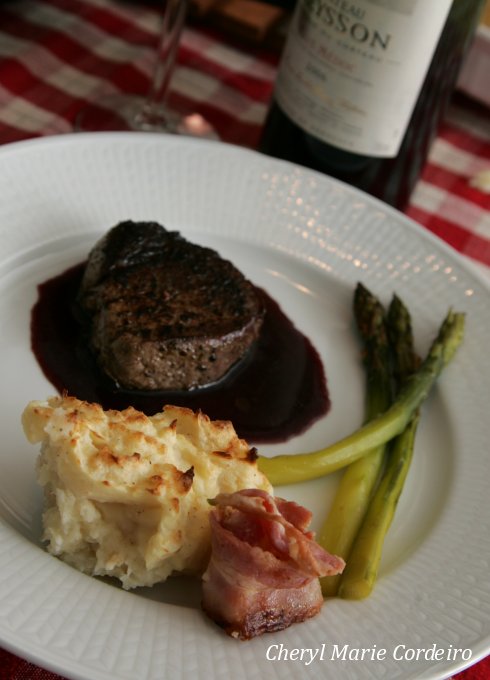 With the root gratin with the bacon wrapped asparaguses in the oven and the sauce maturing on slow heat, I simply fried the beef to medium rare and served.

As a last thought I tossed together a small salad with green lettuce and sunflower sprouts in a raspberry vinaigrette (unpictured). The combination of flavours from the raspberry vinaigrette with the celery and the red wine sauce made this salad virtually indispensable as a side to the file mignon – a little bit of Tinker Bell sparkle to the entire meal.