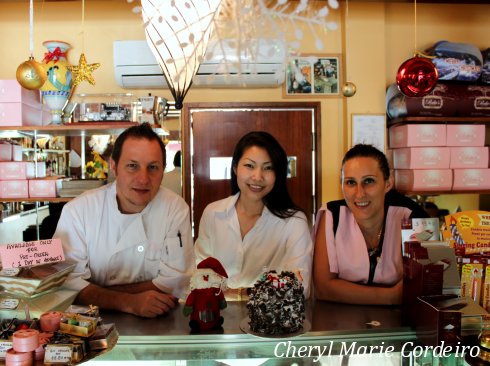 Myself, flanked on the left by Valentino Valtulina and his sister, Perla Valtulina in Perla’s Pastry Boutique.
R Di Nardo, G Valtulina and CM Cordeiro for CMC © 2010

It was somewhere between lunch and tea, that I met with Valentino and Perla in the Ristorante Da Valentino, located along a stretch of previous shophouses at Jalan Binka, nestled in the midst of a housing estate in the Bukit Timah area that to me, was quite like Opera Estate where I grew up in the East of Singapore. Here Valentino has three units, a private dining room, a pastry shop and their main restaurant.

Upon entering the restaurant I was greeted by Singaporean families decked in their most casual Saturday wear, in t-shirts, Bermuda shorts and slippers, finishing off their lunches at the pink table-clothed tables, as if they were at home in their very own kitchens. The sight and the atmosphere could not help but fill you with a feeling of warmth and sincerity. You felt welcomed right into their family.

The Executive Chef for the restaurant and this family business is Valentino himself, and on the menu you would often find dishes created by his mother, Alma. As a guest, you could expect to be greeted and seated by his father, Gianpiero.

An exciting part of this venue is the pastries and dessert shop that is taken care of by Valentino’s sister Perla, literally adding the cherry on the top of the entire dining experience at Valentino’s. 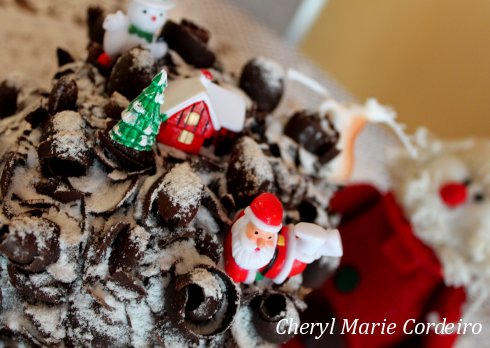 The Panettone – a traditional Milanese Christmas Cake brought to you in Singapore by Perla, prepared in her pasticceria style. It’s an egg sponge cake with candied fruits, covered in rich, dark chocolate.

Being the dessert fan that I am, stepping into Perla’s pastry unit just a few doors down from Valentino’s restaurant was like stepping into a fantasmic confectionery dream with marzipan dolls, icing sugar figurines, customized cakes, pastries, custard tarts, profiteroles everywhere. Dream it and it was somehow already there in front of you! 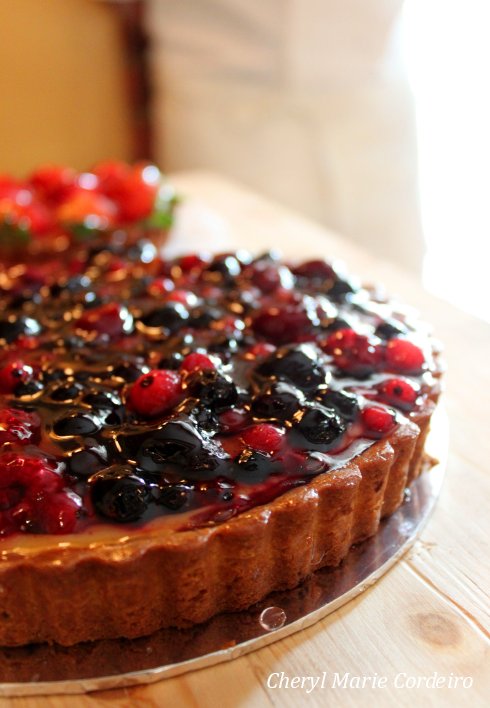 Crostata Ai Fruitti Di Bosco is a mixed berries tart filled with such a lovely consistency of custard coupled with its pastry that it’s difficult to stop at one or even two slices!

Since it was after lunch anyway when I met with the Valtulina family today, I made the severe mistake of going for the Crostata Dia Fruitti Di Bosco still half hungry after a very modest lunch, and managed to devour half the large tart plus then some in just one sitting. A cup of hot chocolate after that didn’t help but … then it was one happy person that discovered this mixed berries custard tart! 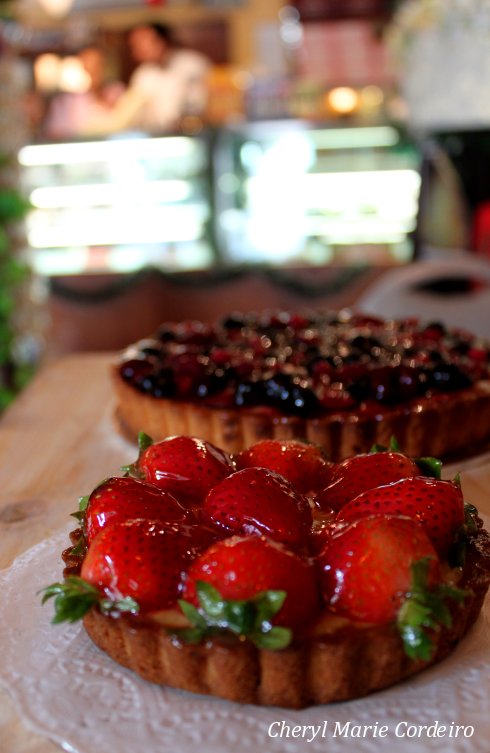 Christmas season is one of the prettier times of the year to visit Singapore because of all the street decorations that spill over into the buildings, restaurants and homes of all Singaporeans and non-Singaporeans alike. 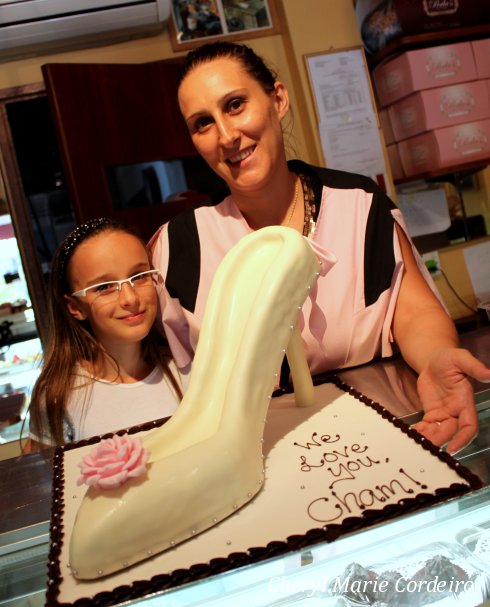 What caught my eye most about Perla’s work is her flare for creativity and style in her cakes and pastries. Here, she’s pictured with her daughter, and one of her works – a cake in the shape of a stiletto.

And Christmas is certainly already here at Perla’s Pastry Boutique, where I’ve managed to photograph one of the most coveted of her creations, Il Panettone di Natale (pictured above with Santa Claus decorations), which here is a traditional Milanese Christmas sponge cake filled with candied fruits, covered all over with dark chocolate, decorated with dark whorls of chocolate and dusted with icing sugar. Pure indulgence and heaven at any Christmas table! 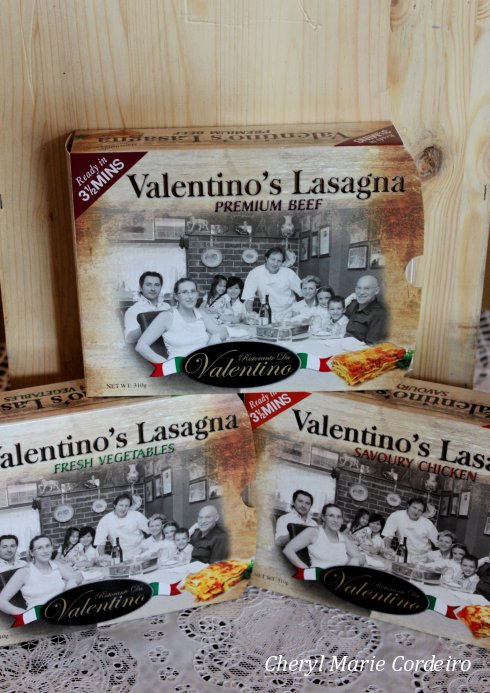 Amidst Perla’s pastries and cakes on display I was a bit surprised to find lasagna packages. With a broad smile, Valentino told me that a couple of years ago, he had worked very late and absolutely tired and not wanting to do any more cooking even for himself, he stopped on his way home to buy some ready-made lasagna for his own dinner. However while opening the package the foul smell left him nauseated for days. The experience made him decide that Singapore deserved better. He then went about ordering machines right out of Italy, to set up his own production line of first class ready to go prepackaged Italian lasagna that would do justice to its name.

Being invited to see the baking kitchen, a number of custard tarts sat temptingly on cooling racks. When inquiring about their destiny, I was told that the tarts were on their way to their Takashimaya basement outlet and that they were right now cooling while awaiting their delivery trucks. It was nice to learn that everything at Perla’s and Valentino’s was made from scratch, using fresh and authentic ingredients, little or no preservatives, and being delivered on the same day to the customer! I felt perfectly at home hearing all this and can’t wait to visit them again.

Only a few doors down from Perla’s pastry unit, there is the private dining area of the Valentino restaurant. 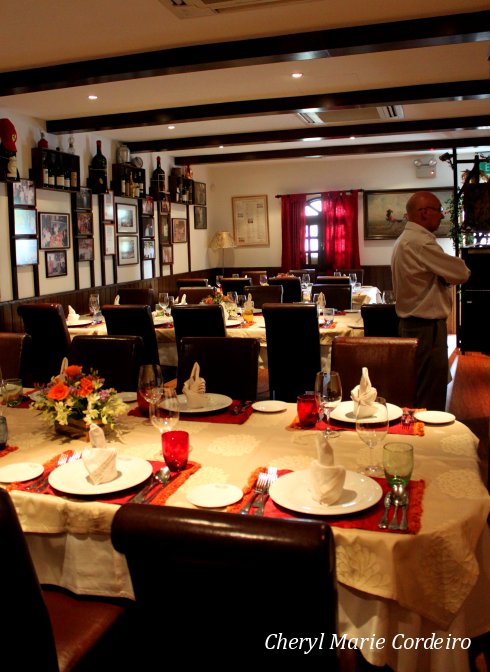 The private dining room at Valentino’s. Standing in the midst of the room is Valentino’s father, Gianpiero. The Valtulina family moved to Singapore from Milan, Italy.

Upon entering anyone could be forgiven for believing that they had just crossed continents and landed in Italy itself. A fireplace in the corner of the dining room sets the mood of the place, with logs of wood and hanging copper pots and pans. 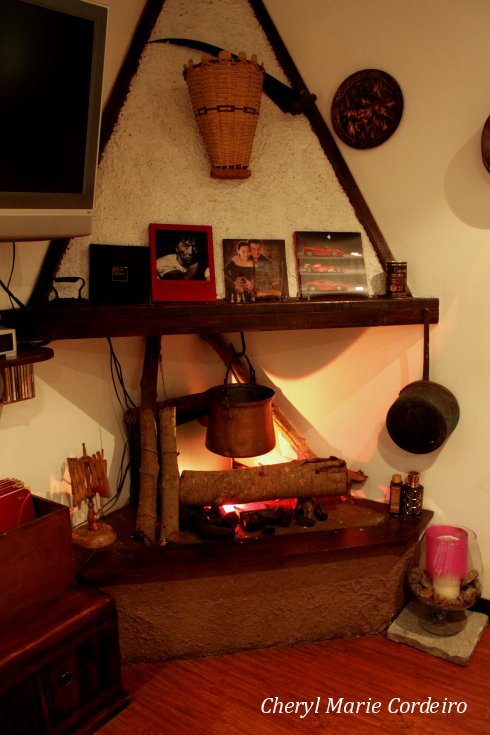 A friendly fireplace adds to the warm atmosphere.

Apart from the amicable atmosphere at Valentino’s and their efforts towards making you feel at home, one very special thing stood out for me, that Valentino had a collection of wines so exclusive and so beautifully displayed, that it would pique the interest of most any wine connoisseur. 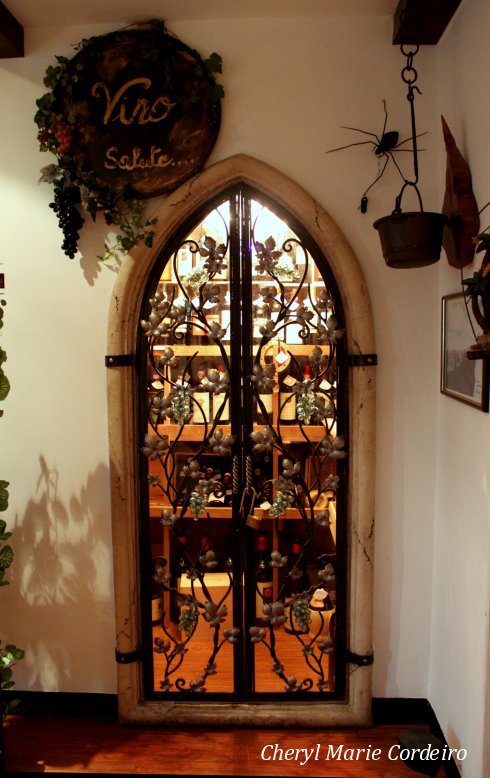 The Wine cellar at the Valentino’s.

I was stunned into absolute silence with my hand going limp with the weight of the camera, when Valentino and his father, Gianpiero, pulled out a light coloured wooden casket containing a 27 litre bottle of Brunello di Montalcino “La Togata”, 2001. 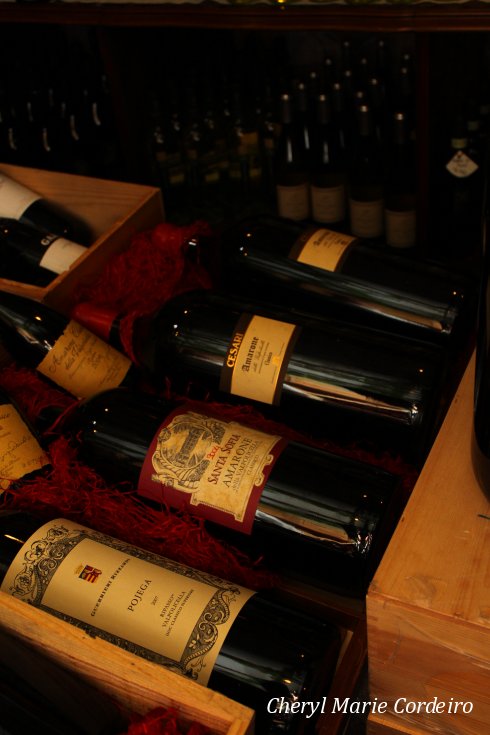 Valentino has a collection of wines that would pique the interest of most wine connoisseurs.

The La Togata Winery is a small vineyard in the south of Montalcino, Siena, with wine cellars in the Argiano Area of Italy. The company specializes in producing top quality wines rather than quantity. 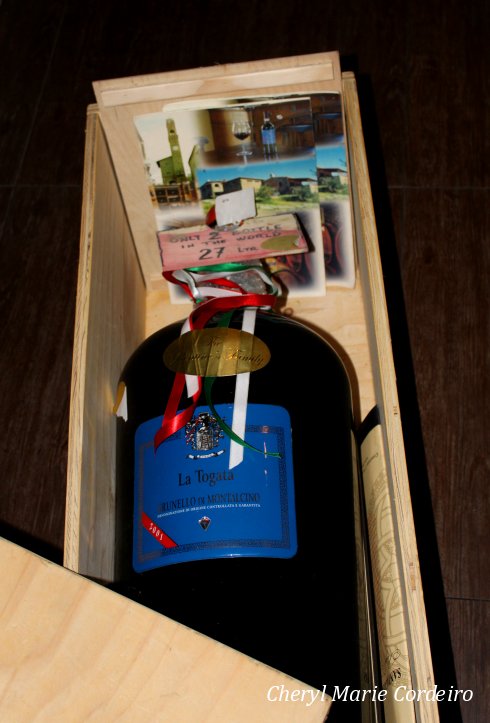 Brunello di Montalcino “La Togata” 2001. In 2001, only 2 bottles of these wines were produced, one of which sits in Valentino’s wine cellar.

The vineyard from which this particular bottle of Brunello di Montalcino was produced, has a history dating from the 1600s, with its story and ownership connected to the Castle of Argiano. The age of the vines from which the Brunello wine is produced is over twenty years old. 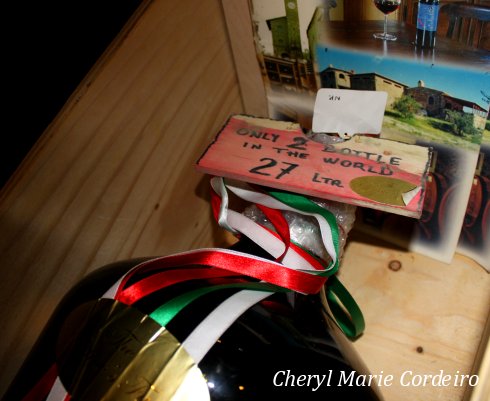 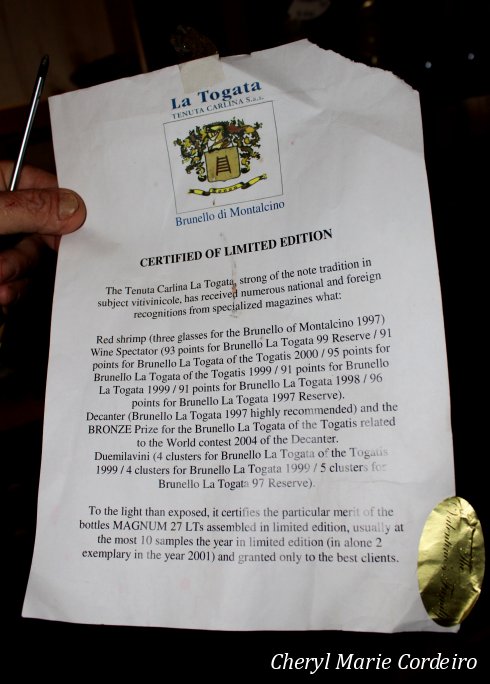 What was particularly unusual with this stunningly large bottle of Brunello from 2001, was that only two such bottles were produced in this year, of which one ended up in London and has probably been finished off by now, and the other is right here in Singapore with Valentino. For anyone as curious as I am, yes – too bad – the bottle is already sold and is just stored here in preparation for an upcoming wedding. 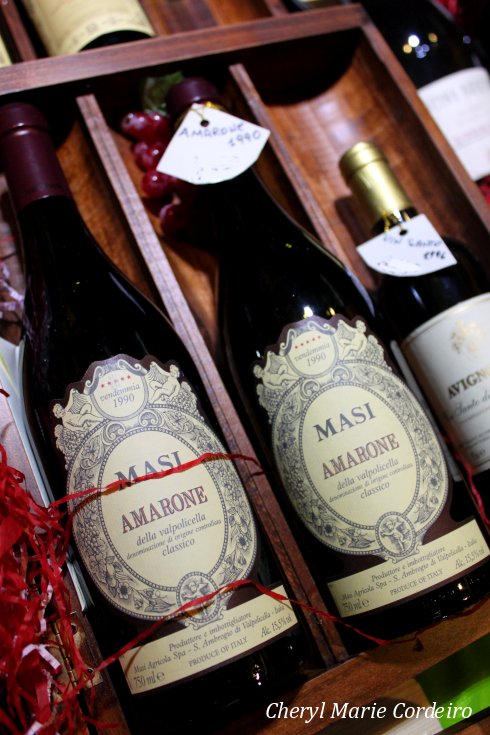 Some of my favourite wines.

I would recommend anyone a visit to Valentino’s and Perla’s be it a take-away or a sit-down dining. I found it most difficult to walk away without some bottles of my favourite wines, but such is the predicament of air travel.

It is their philosophy of food, wines and Perla’s scrumptious pastry creations that will draw me back to Valentino’s.

Catalunya Singapore, a touch of Barcelona, Spain at the waterfront