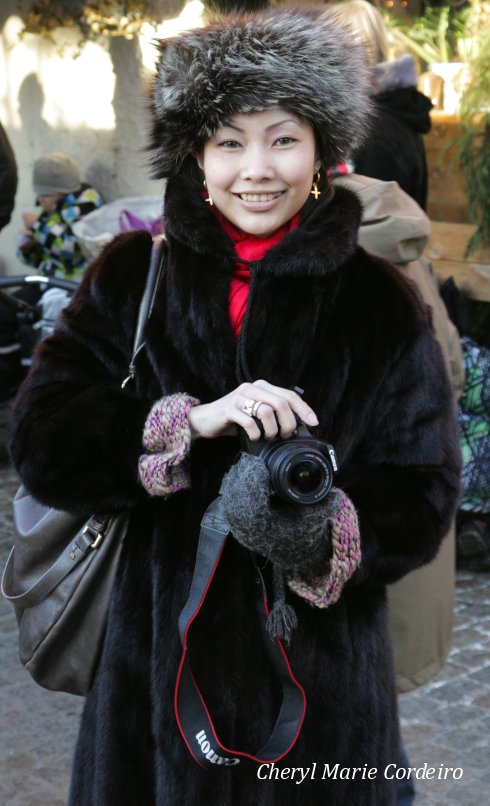 During the whole of December many streets and squares in Gothenburg are turned into Christmas markets with numerous small food and handicrafts fairs, where the emphasis is on the old-fashioned, the homemade and the genuine.

The opportunity is also taken by many historical societies to show off their gear.

Since Sweden is a very secular country, traditional Christian nativity scenes are almost conspicuously absent while the emphasis is on memories of times – and Christmases – long gone.

One of the larger markets is located along the old main street Haga Nygata that runs the full length of the Haga district of Gothenburg. A few hundred years ago this was a pasture area for grazing of the livestock belonging to the townsfolk of the “Borg of the Goths” – the Gotenburg, then located just across the nearby moat.

Eventually the area was filled with the shacks of squatters that were allowed to settle here as long as they were ok with that the city might need to torch all of it in case of war to leave free sight for the canons. Tough times as it were this area is now preserved and the remaining Kronan fortress presents a dramatic backdrop for us just shopping for occasional memories of the past, some excellent homemade pickled herring, Christmas breads or candy. 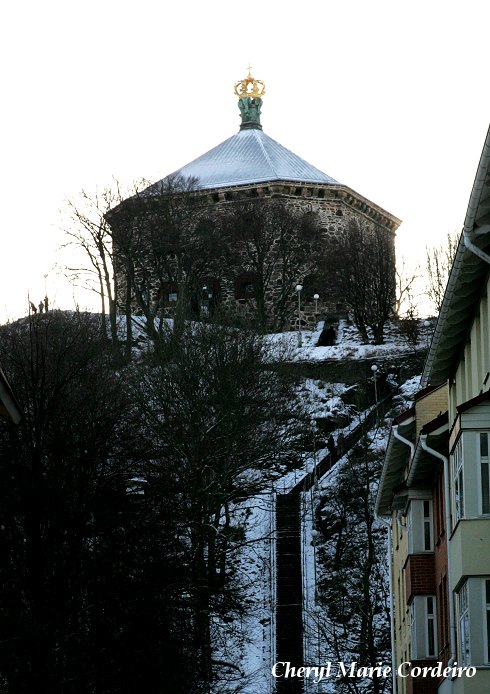 The solemn face of the outlying fortress “The Kronan” overlooks the old Haga district of Gothenburg, now bustling with Christmas shoppers. 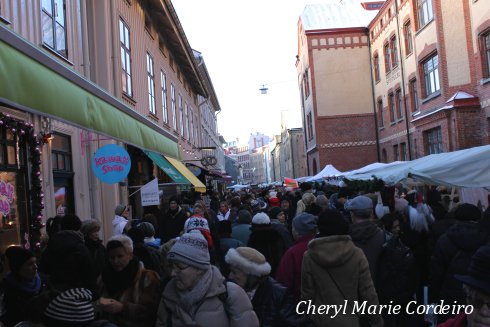 The weather this year promises a white Christmas and it was a pretty sight at Haga, with the narrow cobbled street lined fully with vendors selling all sorts of Christmas goodies from cheesecakes and homemade jams to handcrafted jewelery and needlework for home decoration. 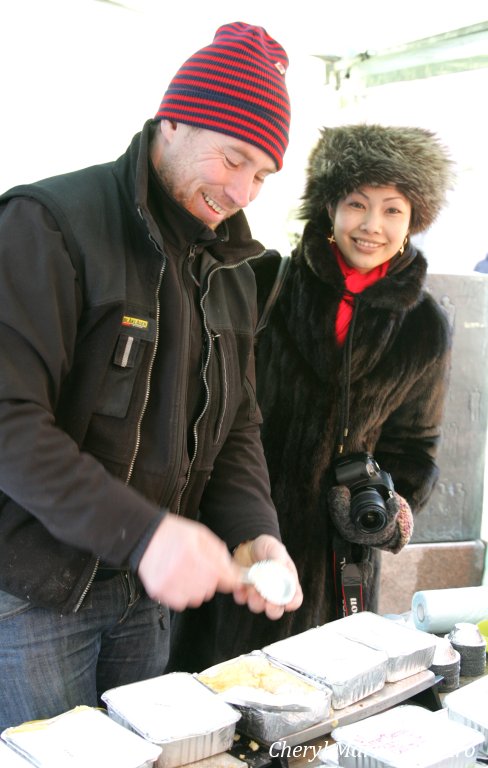 Behind the counter inquiring after jams and cheesecakes. 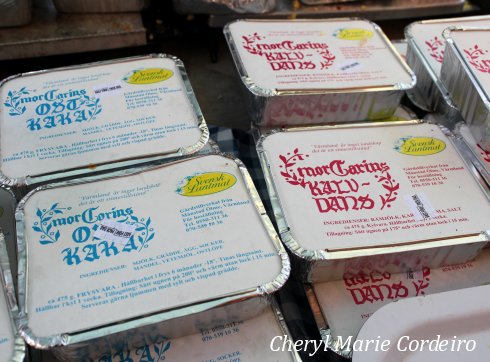 Straight from Värmland, Mor Carins Ostkaka. You can find more of these oven baked cheesecakes from Ölme Månstad, 681 94 Kristinehamn. 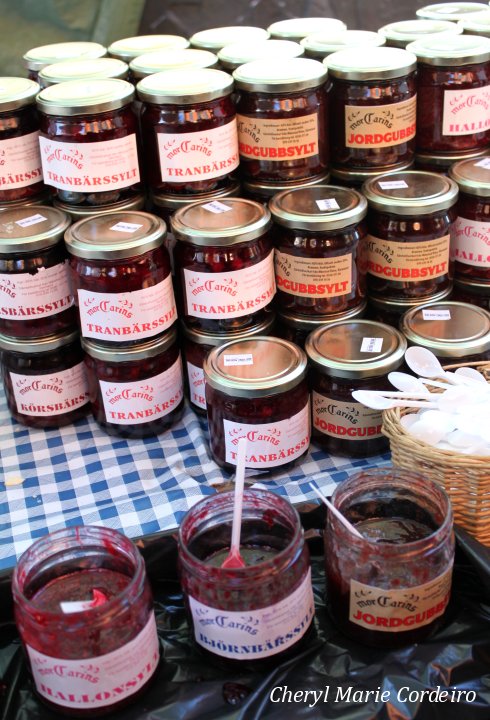 Homemade marmalades and jams. One of the fun aspects of these small time Christmas markets is the generous supply of free samples. The only limitations is how much jam can you stuff yourself with. Well, a lot, it seemed occasionally.

St. Lucia is also upcoming on the 13th of December, so it was absolutely wonderful to see these gorgeous Lussekatter saffron buns on display, for sale, to those who wanted theirs already this weekend! The festival of St. Lucia marks the longest night of the year for the Swedes, following the Julian calendar, where most everyone here would welcome longer days thereafter during the winter period. 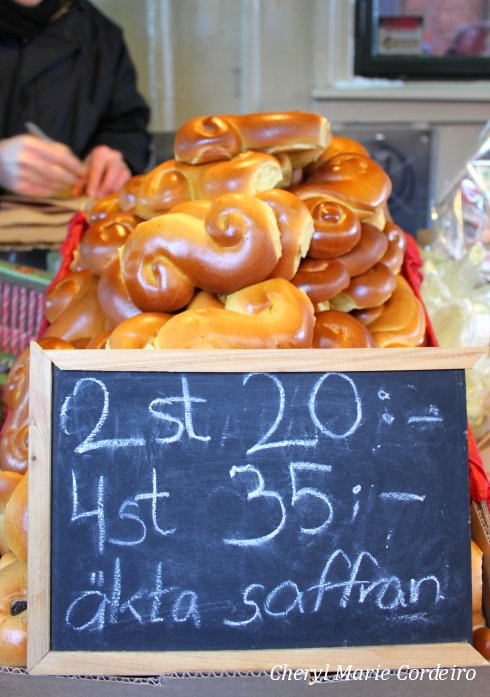 Lussekatter are already out, in anticipation of St. Lucia, celebrated in Sweden on the 13th December 2010. 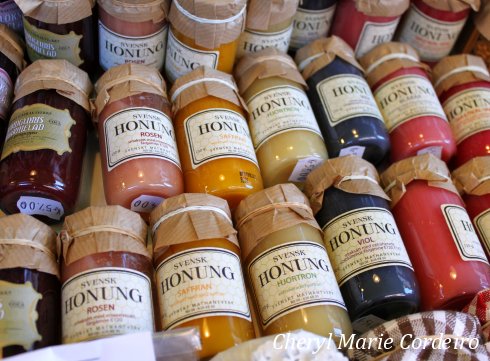 Honey in jars that come in more than just ‘golden yellow’. 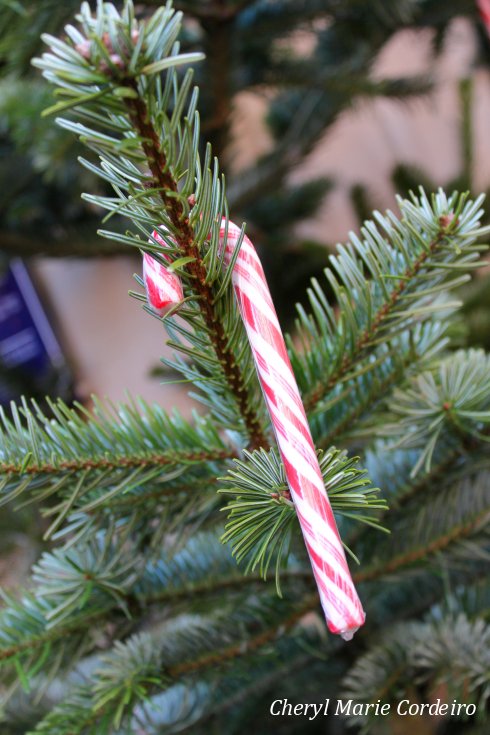 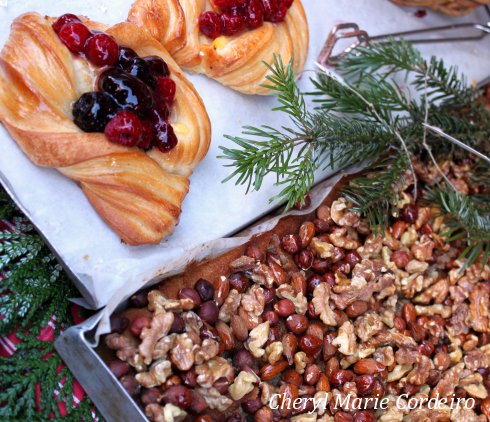 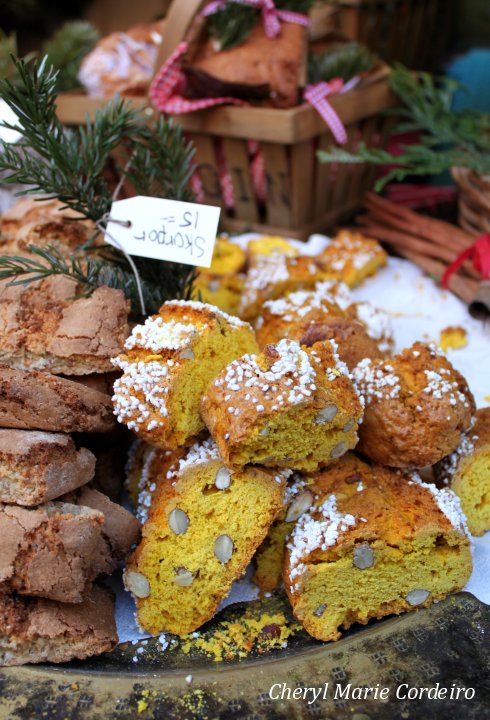 …as were these saffron scones and breads. 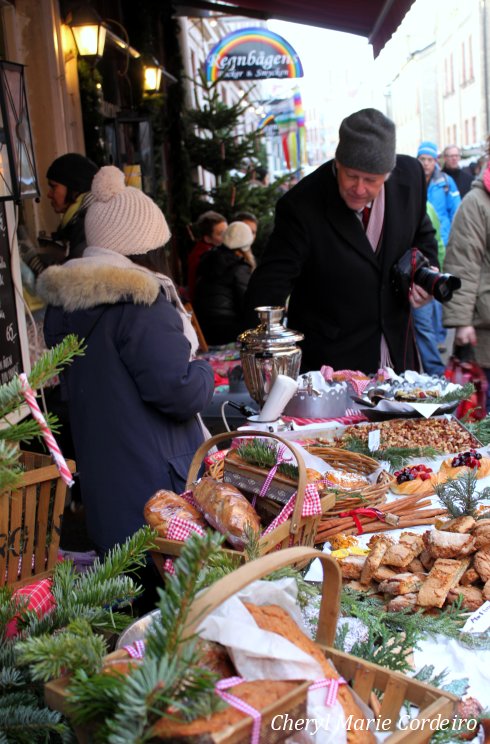 Getting a cup of Swedish Christmas glögg – a red wine based drink that is spice infused, served with raisins and almonds during the Christmas season.

Every year, variations of jultomte make their appearance at the Christmas markets. This year is no different, though this year, ‘pink panthers’ made it to the display tables as well (top left of the picture below). The colour pink as such, is not one that I had also previously associated with the Christmas elves, but nonetheless, it was eye-catching and certainly made my day browsing the stall for my favourite version of the Christmas elf this year! 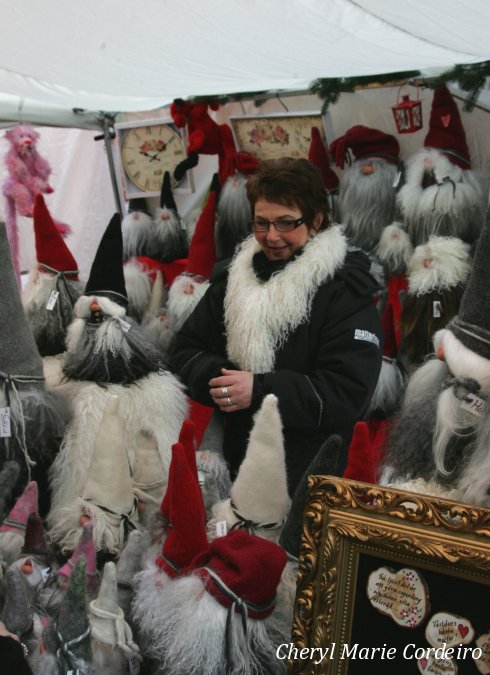 In Sweden, it’s the jultomte that make the Christmas season!

In Swedish tradition the original tomte, meaning “elf” – before the Red and White “Coke” Santa took over the general mind – was a house elf that looked after your house and protected it from fire, as long as you were kind to your animals. As a small thank you, you were to put out a dish of porridge at Christmas. No doubt, in the morning the porridge would be gone and the dish found surrounded by small foot prints – of the Elves. So clear was this notion that the images of these house elves are still immediately recognized. 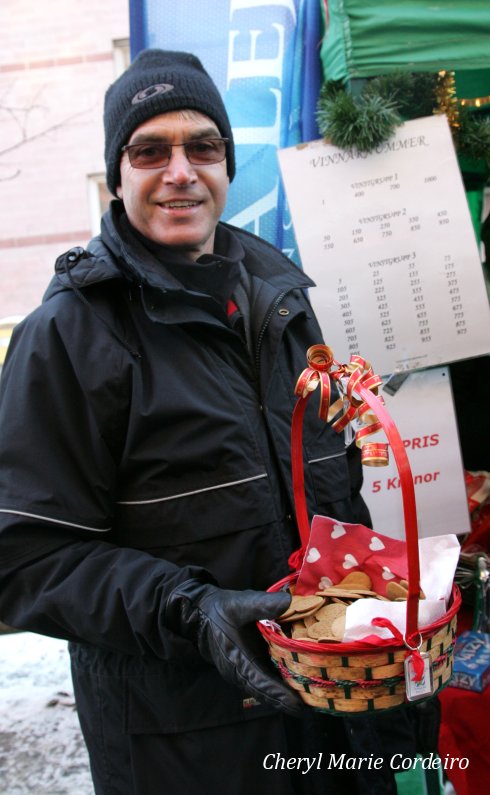 All part of the charm of the Haga julmarknad – free gingerbread cookies at the lottery booth! 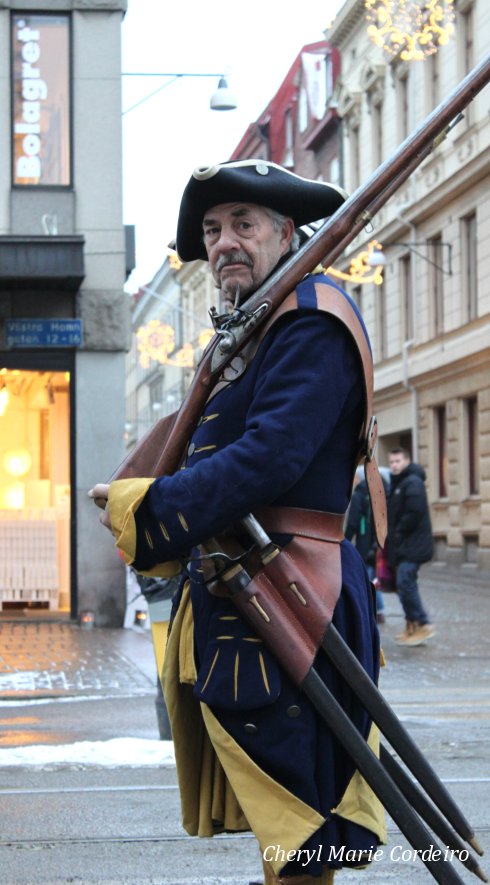 A soldier in full regimental gear of the late 17th century on his way to Kronhuset, as part of an historical re-enactment. Friendly as it might seem, this stuff actually works.

If you’d like to find authentic handcrafted works as Christmas gifts to your loved ones, then Kronhuset in Gothenburg is the place to visit during the festive season. You’ll need to be prepared to spend some on these works of art on display at Kronhuset, but the gifts bought will be unique, with a story of its own to tell – simply ask the stall holder to explain their story and history and they’ll gladly fill in the details of their handicraft, given twenty minutes. 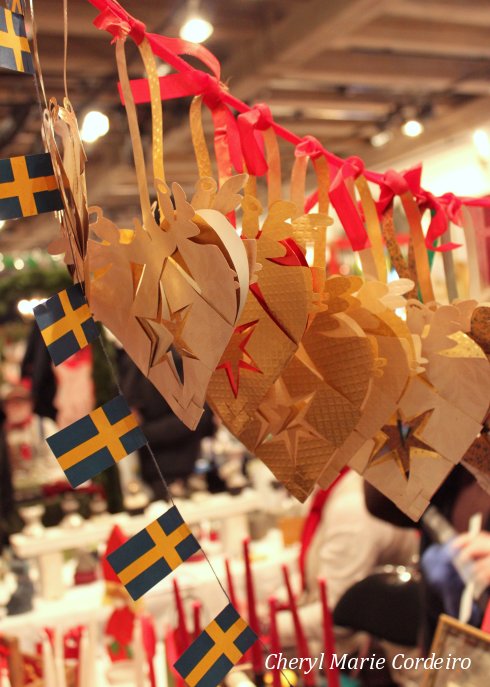 Kronhuset is famous for its sale of handicraft during the Christmas markets – last year, it was cushioned hearts, this year, cut paper hearts for the Christmas tree was what caught my attention. 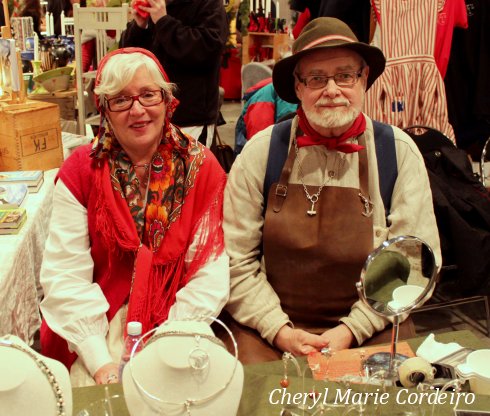 A couple in traditional folkdress at the Kronhuset Christmas market.

One of my absolute favourite shops to visit – whether during Christmas or not – is the Choklad och Karamel Fabrik in Kronhuset. 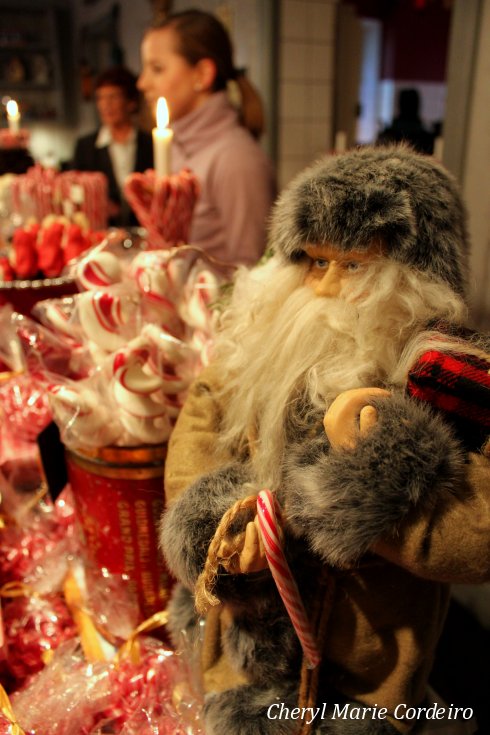 Inside one of my favourite shops of all time, whether Christmas or not, Göteborgs Choklad och Karamel Fabrik, Kronhuset 2010.

Stepping into this candyshop is like finding candy heaven on earth! The smell, the buzz of the crowd – it doesn’t really matter what age you are, you’ll most likely find yourself lost in the aisles of this shop, looking for your favourite version of peppermint candy, marmalade candy or chocolate covered somethings, from rice crispies to almonds and pistachios! 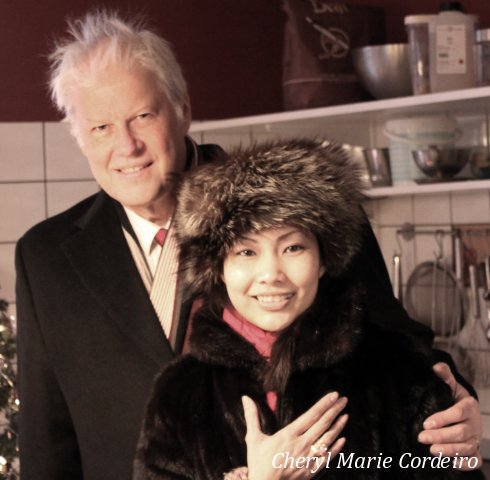 In the kitchen of the chocolate and caramel candyshop. 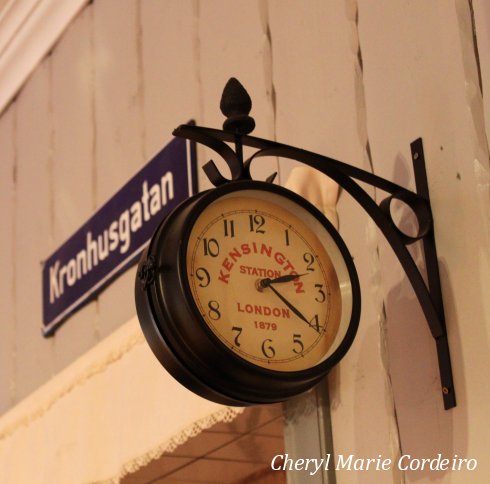 A clock that brings you back in time, hangs on the wood panelled walls of this chocolate and caramel, candy shop in Kronhuset. 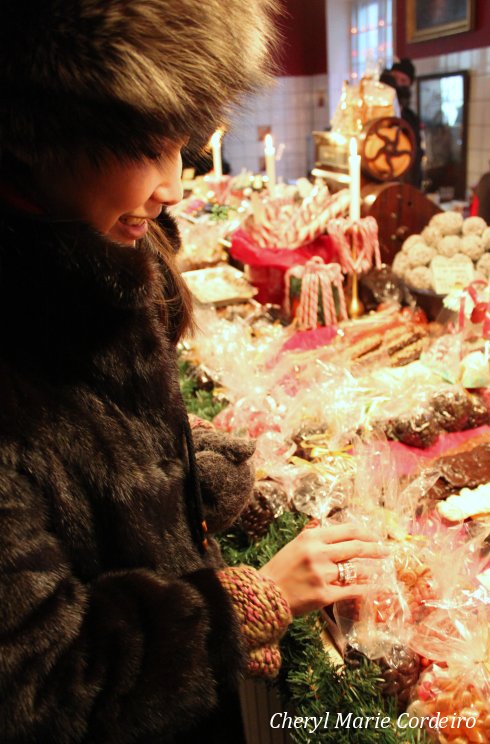 And yes, we walked out of the shop with a few packages of candy in hand.

Saluhallen in Gothenburg is as close to a wet market as you can get in this city, where you can buy most everything from fresh meat and vegetables to cheeses and dried goods, depending on which stall you visit. 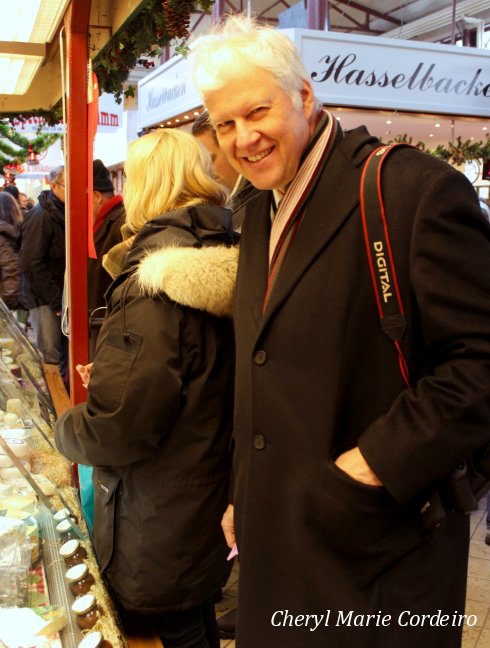 Stopping at Saluhallarna for a little Roquefort and Beppino Occelli’s aged cheese enriched with Barolo.

In most other years, there would be a Christmas market here too in the square just outside of Saluhallen. But the place is under renovation this year and they have for the moment closed the annual Christmas market at this spot.

Still, we couldn’t help but stop over at this place to do a round of cheese and bread shopping – a little bit of Roquefort, brie and Beppino Occelli’s aged cheese enriched with Barolo! We thought it’d be a perfect way to spend one of the more quieter winter nights here before my speedy schedule in Asia beckons for the season.