However much we love cooking, the purpose is eventually always to get to relax a bit and to enjoy a nice meal in pleasant company. Maybe to round off a hard day’s work with a small indulgence. Luckily this could equally well be accomplished without more work than it takes to drizzle a few drops of acacia honey on top of a nice Italian hard cheese, pour the wine … 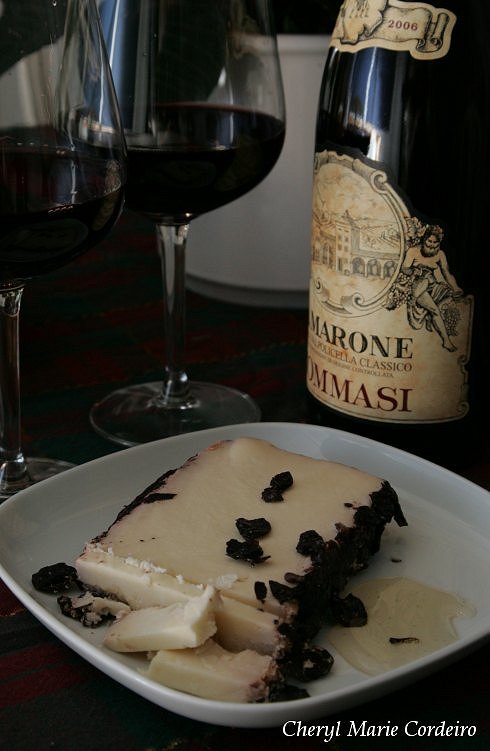 … and say, Hi, you are invited down to the kitchen, to your loved ones.

Choice of cheese: Testun al Barolo, an interesting hard cow’s milk Pecorino cheese from Piemonte in northern Italy. It is matured for six months and then covered with nebbiolo grapes and matured for one more month in Barolo wine oak caskets. It’s texture is a little grainy and the cheese as such has soaked up quite an interesting flavour from the dried grapes.

Choice of wine: Tommasi Amarone della Valpolicella Classico, 2006. I don’t know your taste in wine and this choice could of course be debated. Amarone is a special kind of wine and many of those who have known wine from Valpolicella being something of a joke among wine connoisseurs, love this underdog region being able to get back at the critics by successfully reviving a technique that stems from the days of the Roman empire, and makes the critics eat their words.

It’s fun and it does work brilliantly with certain kinds of food. The thing with this wine is that it changes it’s face over a few hours, from when you open the bottle. I would say the wine fits with most anything at some occasion during its lifespan. Somewhere in the middle I think I would even like to try it with fish. However, the purpose of it all is to have a good time and this Amarone certainly makes for good company.

How did it work out with the cheese? Well, honestly, who am I to decide that? If I need to say something I would say that to me, the combination felt like a big hug by a large family meeting up a cold day in front of the fire place. There are good times and there are bad times, but in the midst of it all, you know you all belong.

One thought on “Winter’s evening indulgence”