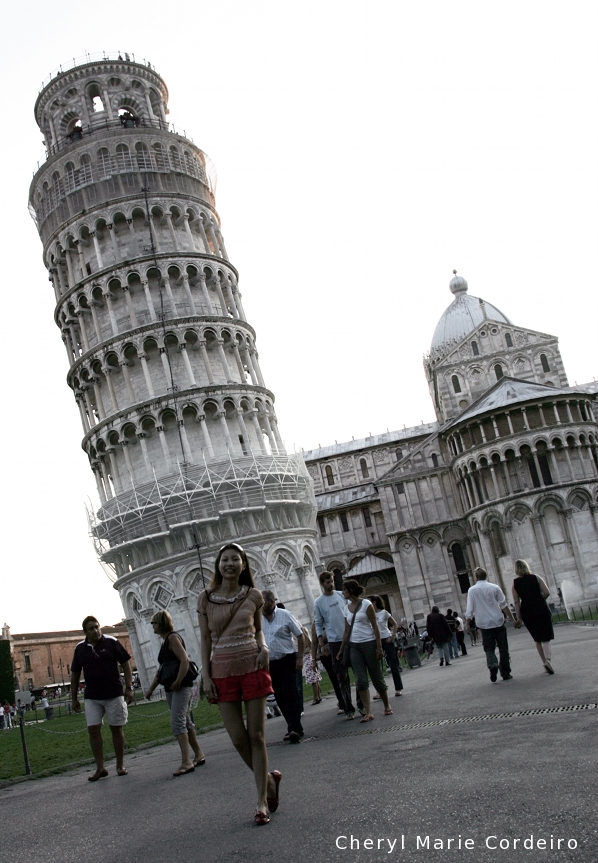 In front of the Leaning Tower of Pisa, which up close, looks disconcertingly precarious. The beautiful symmetry of the stacked arches distracts some from the precarious leaning of the tower though.
Text & Photo © JE Nilsson, CM Cordeiro-Nilsson 2008

Pisa, the birthplace of Galileo Galilei the physicist and one of my favourite tenors, Andrea Bocelli (born in Lajatico, Tuscany), is a city that lies in the west coast of the Tuscan region of Italy. Tuscany in central Italy, is a most inspiringly beautiful place to visit in general, with the lands undulating with vineyards and restaurants atop hillocks. Florence is one of the more beautiful cities in Italy to visit, with fantastic food and scenary. The Tuscan region in Italy is like poetry, with its land sculpted via both the force of nature over time and its people.

An architectural marvel and personal curiosity is the Tower of Pisa that in my view, so elegantly leans to one side. Well. Alright, it was miscalculated, but still – beautiful. 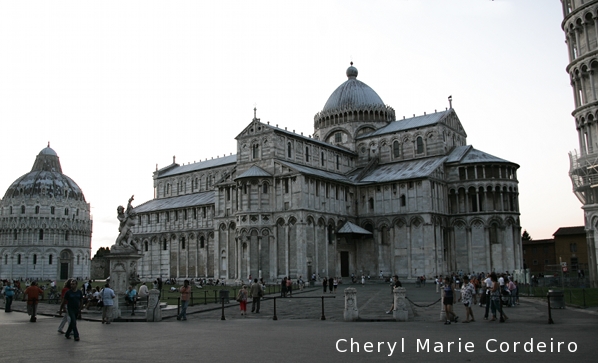 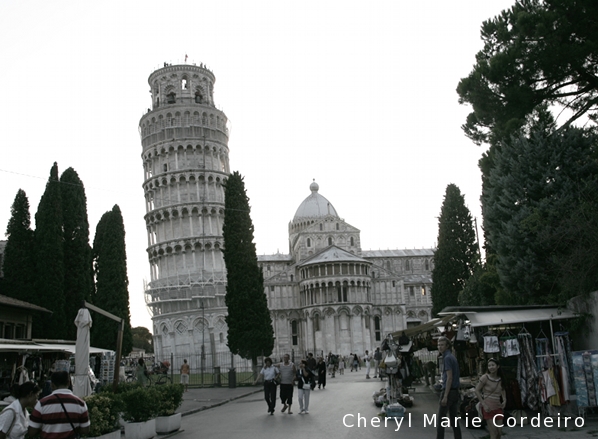 The view of the Leaning Tower from afar, before entering the grounds. If you’re driving, parking is quite convenient as there is ample parking space just outside the Piazza dei Miracoli. Tour buses often stop about 200 metres from the piazza. 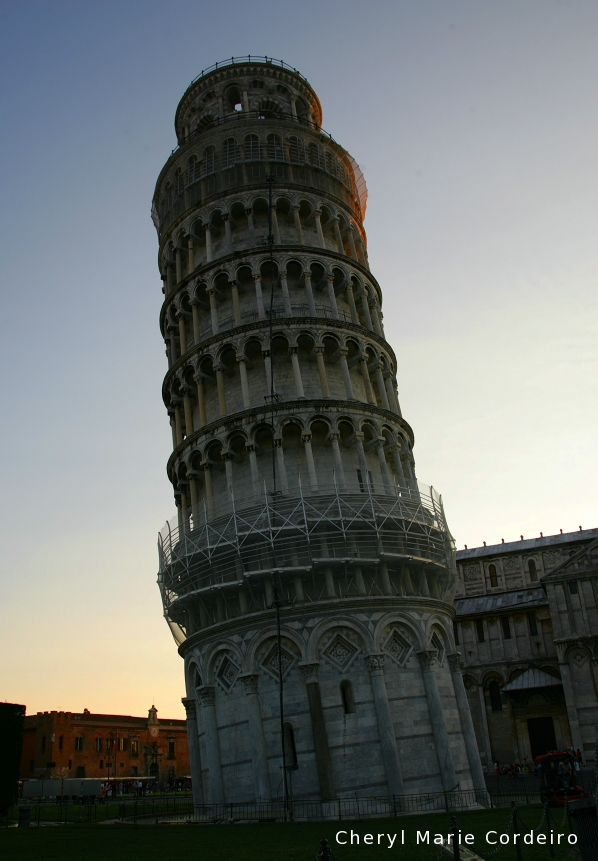 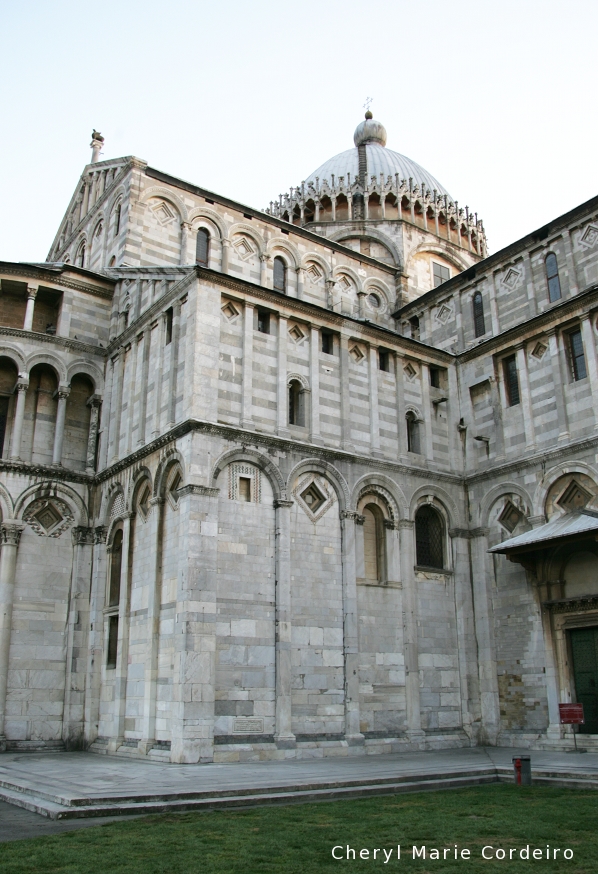 I grew up looking at postcards and pictures of the Leaning Tower of Pisa and I’ve seen travel pictures of friends who have been there, but never actually thought that I would one day be standing in front of it myself. Though leaning to one side, the structure is breathtakingly beautiful in white carved marbel. Restoration works were ongoing on the white marbled facade of the Leaning Tower of Pisa when we visited.

It was almost sunset when we arrived at the Piazza dei Miracoli or the Square of Miracles. We had expected some difficulty with parking since the place was a well-known tourist attraction, but it went smoothly with finding a space for the car. No paid ticket needed. 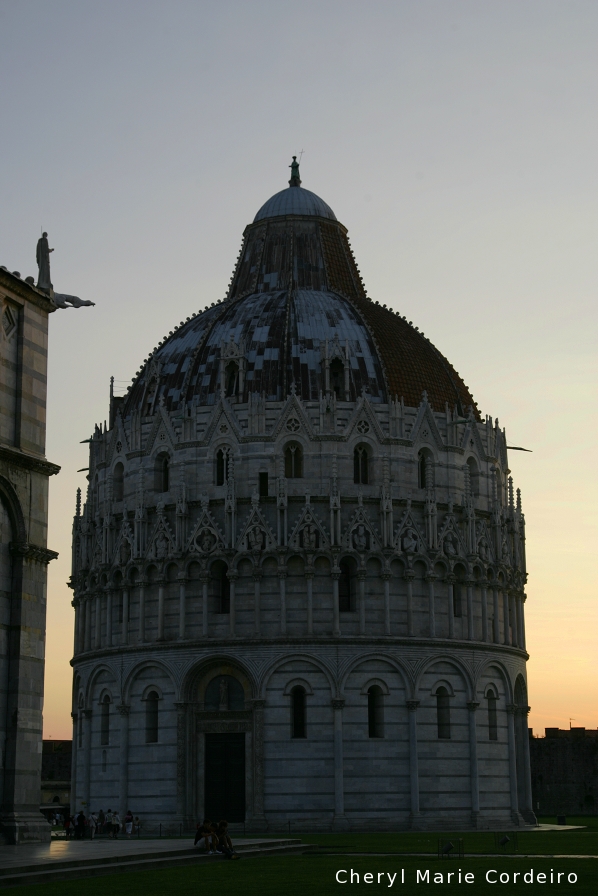 The Baptistry of St. John began construction in the 1100s, and it is the largest baptistry in Italy at 54.86 m high and a circumference of 107.24 m. The construction of the baptistry took about two centuries to complete.

The Piazza dei Miracoli has three architectural wonders worth visiting, including the Leaning Tower of Pisa, also known as the Bell Tower, the Cathedral and the Baptistry of St. John. The Italy Guides to Pisa contains some panoramic views of these buildings, lending a fantastic view to the place via the internet.

The Baptistry of St. John proves architecturally more interesting (if not equally as interesting as the Bell Tower) since it is an example of a transitional style of the time. Its design is somewhat of a cross between the more solid Romanesque style as seen at its base, and the lighter Gothic style (as noted in Chartres and the buildings found in the Piazza San Marco in Venice). 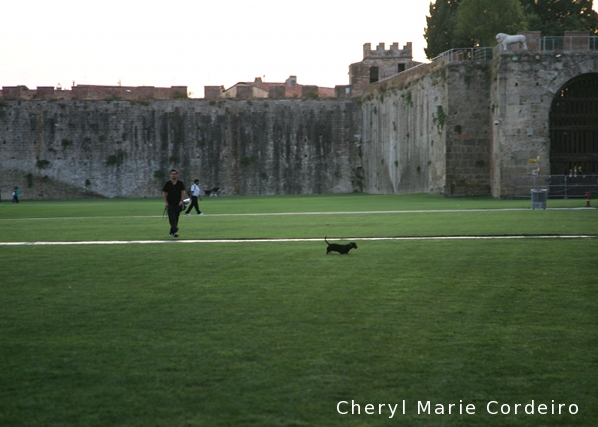 The spacious lawn at the piazza was a total delight for this little dog, who took the liberty to run as fast and as far as it could. It’s owner following, didn’t seem to mind.

The place was crowded to be nearly sundown as the first picture above shows, with many tourists making their way comfortably around the grounds. The grandiose space and the lusciously green lawn that carpeted the area, surrounding the ivory coloured buildings made you feel as if you were entering a private compounds of sorts, one that was very well kept. A picture of the Baptistry in the Tuscan sunset of gold and purple tones.

In fact, visiting Pisa is a comfortable affair since the road tangent to the piazza contains various restaurants that serve decent local fare. Getting a slice of pizza together with your preferred drink couldn’t be more convenient.