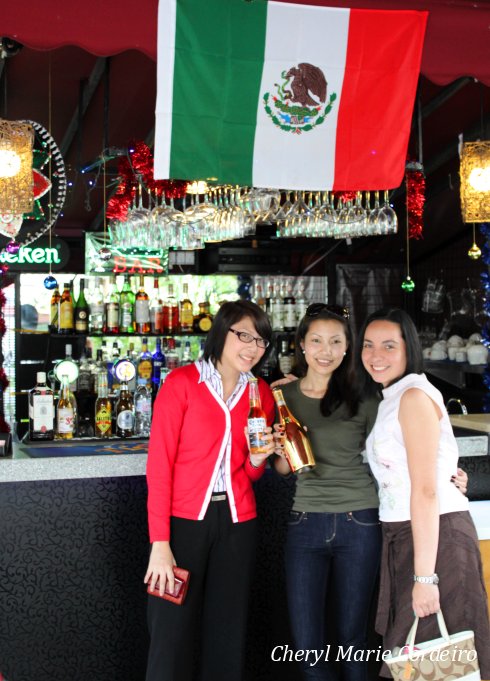 In the Colours of Mexico!
Photo © JE Nilsson and C M Cordeiro-Nilsson for CMC 2010

I think my experiences with Mexican food prior to Casa Latina in Singapore, with the girls Azul and Janice, were mostly American Tex-Mex style limited to tacos, salsa, guacamole, tortillas, quesadillas and tequilas! Azul herself is from Mexico City, having lived in Singapore for some years now, and I couldn’t be happier or more grateful for this excursion on Mexcian culture via food when she introduced us to some Mexican fare right here in Singapore! And recently in November of 2010, Mexican cuisine was added by UNESCO to the list of world’s “intangible cultural heritage”. 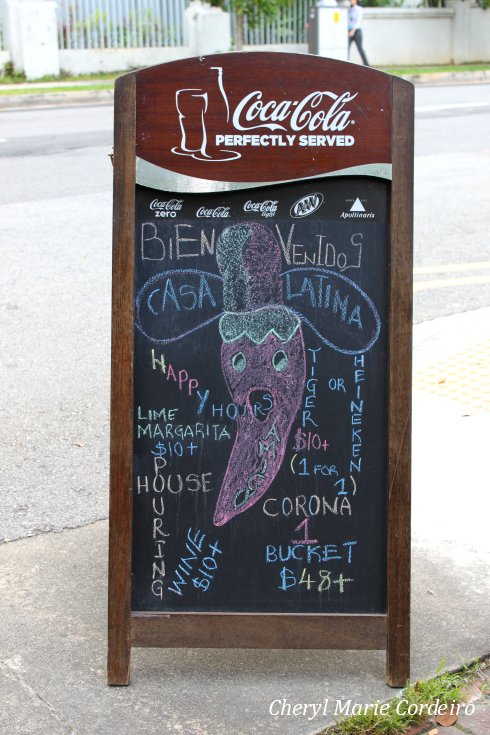 A chirpy welcoming chalkboard with a mexican jalapeño! 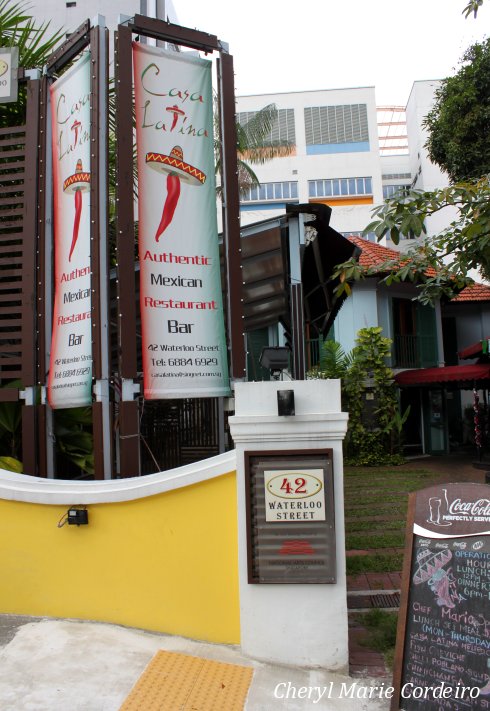 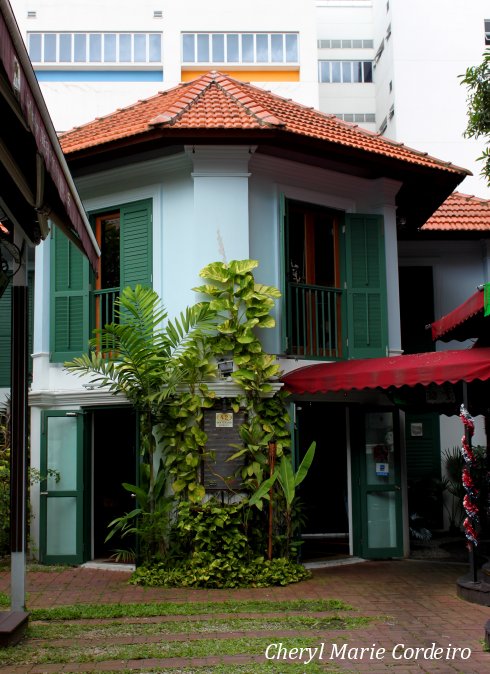 Waterloo Street falls under one of the 71 areas of Conservation for Singapore. What was previously a large compound house as shown in the picture above, many buildings along Waterloo Street house organizations in the Arts industry.

I was early at Casa Latina and was able to enjoy exploring the grounds on my own. The restaurant is located at 42 Waterloo Street in Singapore, where these days, you can take the MRT right to Bras Basah station and pop out at Waterloo Street. 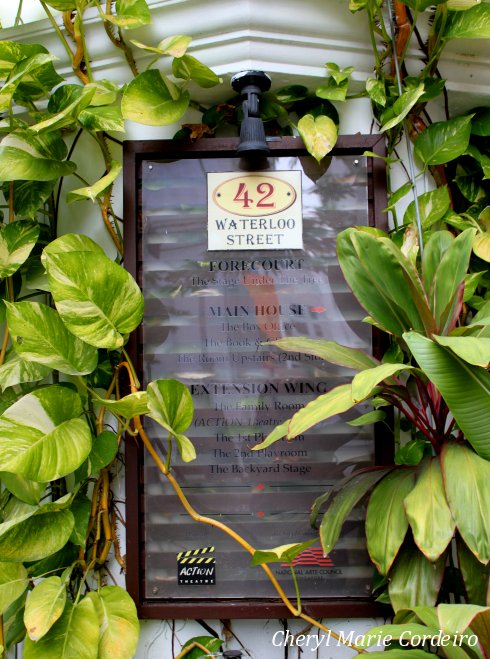 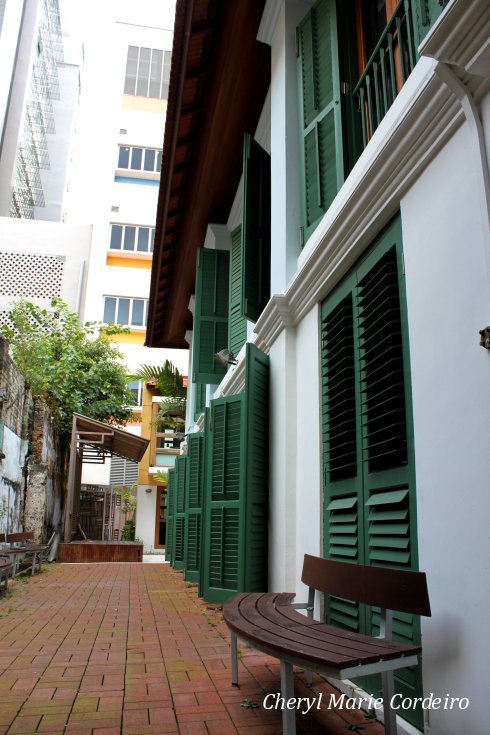 A conservation of the original architecture of the building, that reminds me of a large and cozy compound house from the early 1930s in Singapore. 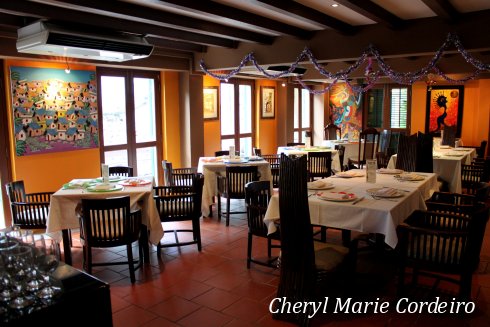 The restaurant with authentic Mexican art on its walls.

The two-way street that stretches from Rochor Road to Bras Basah Road was named in commemoration of the Duke of Wellington’s victory over the French in 1815, the Battle of Waterloo. The street today houses the Arts Belt in Singapore, where the restaurant itself, that looks like a large and cozy compound house from pre World War II for example, shares its upper floors and grounds with Singapore’s Action Theater.

In testament to Singapore’s multi-racial, multi-religious beginnings, where communities of individuals found a way to live harmoniously and tolerantly of each other’s values and beliefs from way back in the early 1800s, Waterloo Street is also known for religious buildings, where you can find the Kwan Im Thong Hood Cho Temple, alongside the Maghain Aboth Synagogue which is oldest synagogue in Singapore built by the Jewish community in the late 1800s that is alongside the Sri Krishnan Temple, all walking distance from each other.

Casa Latina contributes to the multi-raical fabric of the Singapore society in its Mexican culinary offerings. It was here that my appreciation for Mexican food expanded now to include core regional dishes. Some of which are pictured below. 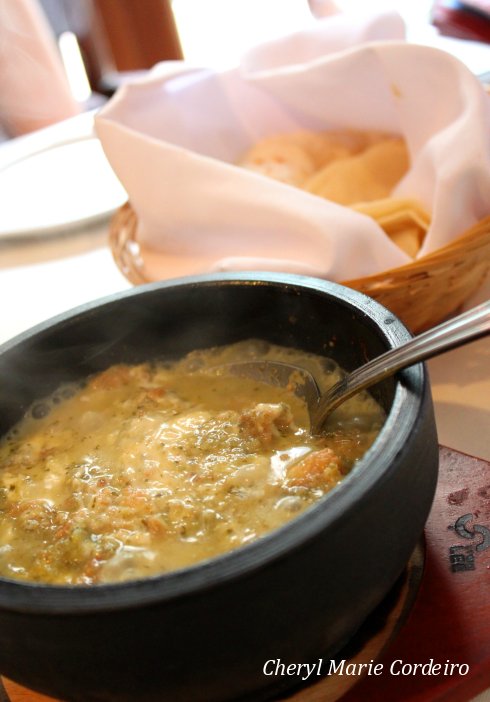 Queso fundido, a melted cheese appetizer that came out piping hot in this bowl, was thoroughly mixed and then served with tortillas.

First out as an appetizer was a melted cheese concoction that was as fascinating to watch it being served as finally tasting it spread on a piece of tortilla. We were also not the only table that enjoyed this as an appetizer but the table next to us seemed to agree that the queso fundido was indeed one of the more popular of dishes at the restaurant. 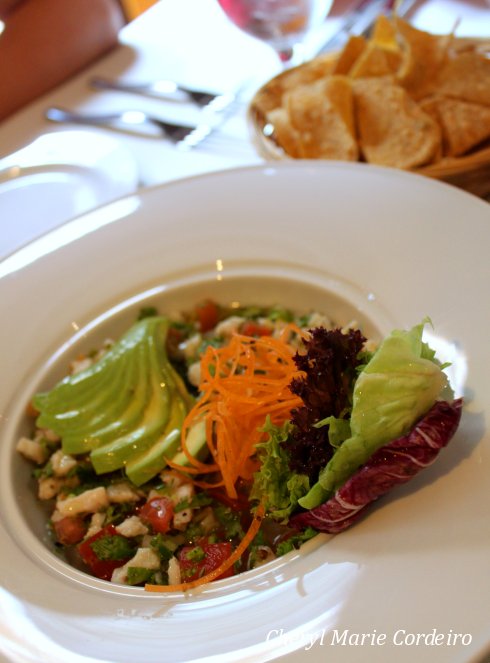 Ceviche is dish with raw fish marinated in lime juice, often served (as in this case) in a chopped salad. Refreshing as an appetizer and one that leaves room for the main course, the fish and vegetables whetting the appetite for more to come! 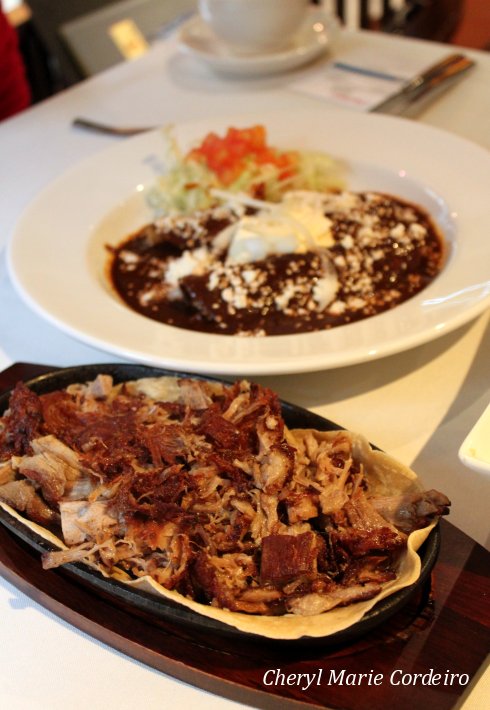 Literally meaning ‘little meats’, this is braised meat (usually pork) that takes between 8 to 12 hours of cooking time, ensuring that the meat fibers are completely broken down so that the meat is easily shreadable by finger or by fork. Prior to serving, the shredded meat is placed in a shallow heavy pan and roasted on high to caramelize the surface of the meat till deep gold and crisp. What went into the meat served here was not revealed although the seasoning usually includes salt, oregano, marjoram, thyme, bay leaf and garlic. 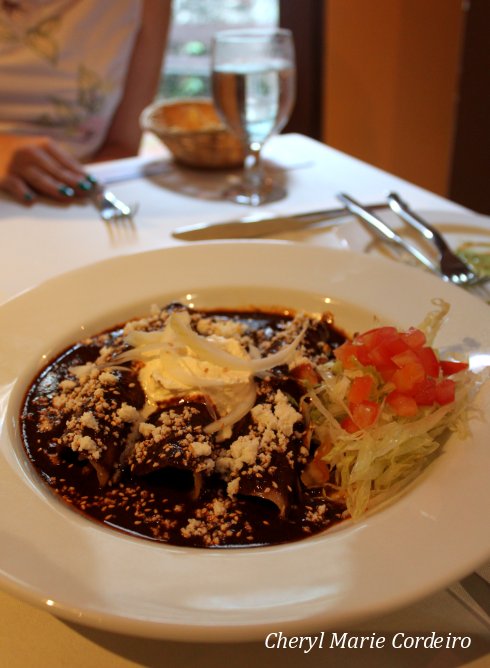 A dish that brought us back several centuries in flavour – enmoladas – a chocolate curry sauce and cream cheese over chicken wrapped in tortillas.

I was most fascinated with the Enmoladas, since it combined my all time favourite food, chocolate with chilli, spices and cheese in a way that I never thought was palatable! Chocolate, which has its origins in central Mexico in Mexico’s Aztec cuisine was first drunk rather than eaten, was initially flavoured (between 250 and 900 CE in the classic age of the Mayans) with chili pepper. Chocolate was also known as a bitter drink and it was the Europeans during the 1500s that had added sugar into chocolate and substituted chili pepper with vanilla, introducing what we all know today as sweetened chocolate. So the served Enmolades was to me, a dish so ancient in flavour that I couldn’t possibly begin to articulate how deep rooted into history that all at the table were brought / transported just by tasting this dish of chocolate in a spicy curry sauce.

Another ancient dish is the Tamale. Tamales originated in Mesoamerica as early as 8000 to 5000 BCE, with the Aztec and Maya civilizations using them as portable food for hunters, travellers and their armies. One could compare tamales to the modern sandwich, where they are just as versatile regarding what goes into them, resulting in savoury or sweet tamales. Made of masa, tamales are cornmeal paste wrapped in corn or banana leaves and then steamed. Stuffings include most anything from meats, vegetables, cheese and in our case, chocolate topped with ice-cream.

Our anchoring in historic times came from the taste of Mayan and Aztec Mexico, and from there, the afternoon passed in a blink with our conversation revolving around some of the more interesting and poignant issues of a globalized world, from the political conditions of Afghanistan, the future of Europe in relation to China, and how best for example, to do business in Japan.

While it might seem to have taken a long time, about a thousand years, for us to consume chocolate as it was once consumed by the Mayans and the Aztecs of Mexico, nonetheless the cultures of the world continue to learn from each other and draw inspiration from each other, turning the wheel of time in a continuous motion. For me, it was a privilege to have discovered this cove of the taste of primordial Mexico, right here in the tropics of Singapore, even if in 2011.

Back for lunch at Valentino’s, Singapore