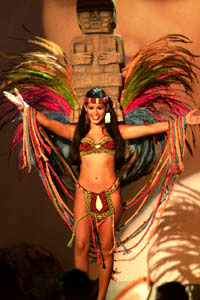 I had a tag from Chey of Stilettoed Praline to pick out the 6th picture from the 6th folder of my photo albums folder and write a story about it.

As it happens, the 6th folder in my photo albums folder contains all pictures to the 1999 Miss Universe pageant and the 6th picture happened to be Miss Bolivia, Susana Barrientos Roig, in her national costume. This picture was taken at the beginning of the show, where all 86 girls that year could show off their National Costumes.

I couldn’t have been more delighted at the array of colourful costumes that reflected the diverse cultures the girls came from. I had great fun during my time at Trinidad and Tobago, being Singapore’s delegate to the pageant and made some good friends along the way.

This was Singapore’s National Costume for 1999: 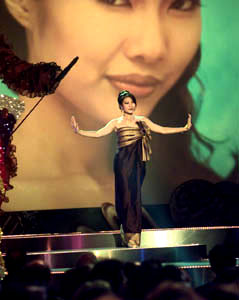 A picture of me on stage at the Introductions and National Costume segment. Singapore’s National Costume for 1999, a faux wrap sarong in silky brown with gold details. This sarong dress was by Singapore designer, Celia Loe.

The sarong was quite a fair representation for Singapore since it is a staple wear for most Southeast-Asian cultures. The Malays, Peranakans and Indians all have the sarong as some form of basic clothing, usually made of light cotton material to combat the humid tropical heat.

The sarong dress by Celia Loe had a great bow detail to the top left of the dress, which looked as if one had tied a tremendous knot out of it. It was the knot and the gold colour against the earthy brown that added some drama to its simple silhouette. 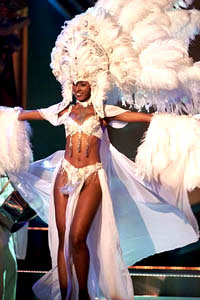 The Best National Costume Award went to none other than the host country, Trinidad and Tobago’s Nicole Dyer. With their Carnival culture and the Carnival theme to the pageant where I witnessed the vast efforts that the people of Trinidad and Tobago had put into preparing to host the Miss Universe pageant, I thought they more than deserved the Best National Costume Award. Nicole looked fabulicious in her outfit!

White cardigan from Pringle of Scotland