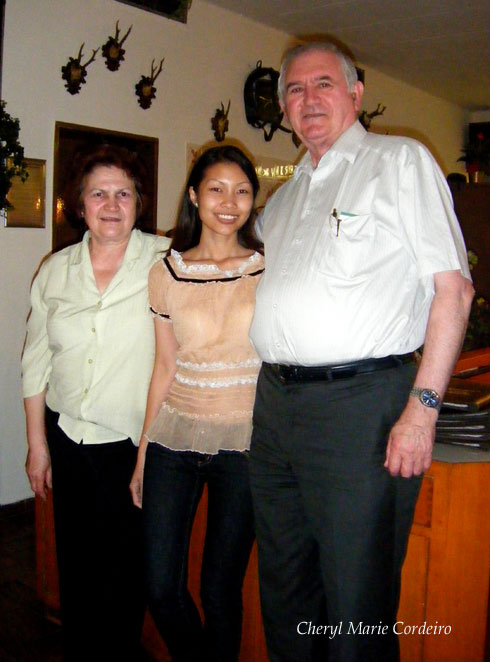 Standing near the entrance of Zum Dachs, with the owners of the restaurant, the Grbesas.

It was already early in the evening when we decided to stop in Munich for dinner. We had driven by car over the Alps, through the Bremer pass, all the way from Venice. We turned off the engine of the car in Austria and basically freewheeled down into Bavaria.

I eventually understood that it was time to take a break since my travel mates had gradually fallen more and more silent, and were by now answering my chirpy comments on nature and architecture with grunts. The only thing that appeared to catch their interest were occasional bovines grassing in the fields along the road, as if they were already fried and in-between two hamburger buns.

It was definitely time to stop for a meal.

Venice had left a distinct impression on me of ridiculous prices and bad food. The memory of the food experience in Venice lingers in my mind as something close to having been robbed in broad daylight and without really grasping what had happened, you realize that your wallet’s gone and you’re still hungry. Alright, perhaps that’s an exaggeration but to eat well in Venice you need personal recommendations guiding you to the few restaurants that haven’t as yet got tired of tourists.

After settling in the house where we were to stay in Munich we decided to go hunting for a place to eat when luck and our trusted GPS led us to Zum Dachs.

Looking more or less like any ordinary private house, Zum Dachs turned out to be one of the coziest restaurants you could ever land yourself in.

Located at Säbener Strasse 173, it had alrady been there for thirty years just waiting for us to discover it, and it’s run by a friendly Croatian couple that had come to Germany more than forty years ago.

I think as a customer to a restaurant, what you’d look for when determining if the place is worth returning to are more or less what the Michelin Guides (in our own differing standards) have laid out in pre-requisites:

I would not complain about any of this, and it got better. What we found at Zum Dachs was also a soft and cozy atmosphere. It felt like we were welcomed into a private home. As we sat and browsed the menu, an old man walked in and plunked himself down at a table near us. The gesture looked like it was something that he had most certainly done all his life, making the concept of “Stammtisch” suddenly coming alive in my mind.

From the menu, that took a working command of German to understand the finer details of, we understood that the cuisine was inspired from both Croatia and Germany.

Clearly no new cooking concepts such as “deconstruction” or “molecular” had ever entered this kitchen, nor “fusion” (although some dishes possibly were). “Low fat” and the sadly undernourished French “Nouvelle cuisine” had also come and gone while leaving no impression whatsoever. “Hearty”, I think would be my preferred choice of lexis to describe the dishes.

Since a visit to Munich without beer would be like visiting China without tea the choice of drinks was soon settled.

While browsing the menu we soon settled for a set steak platter that would serve four, to be shared between two, since the experience in Venice lingered bitterly with us, making us suspicious of small portions.

Mrs. Grbesa swept her keen eye over our group and with a soft smile said, “I believe the set meal for two will be fine.” We didn’t immediately understand the extent of wisdom that were reflected in her words. However, she promised to throw in some extra fried kartoffeln just for good measure, probably sensing what traumas we had been through.

When the food arrived, we realized she was right. We were almost embarassed, because what arrived at our table was of epic proportions. It was the Giant, out of a food fairy tale. On top of a mountain of rice, salad and sauce came a gargantuan portion of Wiener Schnitzels, beef steaks, fried fillets of fish and some generous cuts of sizzling hot fried liver. It could have fed eight. To make sure we had our fill, our plates were topped up with French fries continually throughout the meal.

After the meal, we were enjoying happy thoughts and a cup of coffee when we could not help but enquire about some drinks that were served at another table. It appeared to be similar to Swedish Schnapps and it was strange to see 100 proof alcohol being served to a lady, as a dessert.

We were then introduced to the concept of Obstler (after the German word Obst=fruit) a distilled brandy based on fermented pears, apples or plums.

The lady of the restaurant, seeing that we were travelers then decided in a split second that a round each of this was what we needed to perfectly round off our dinner and tuck us in for the night, compliments of the Grbesa family.

We were completely won over.

Zum Dachs isn’t anything grand for a restaurant. The decoration is traditional and modest with dark wood and trellis panels. However, something in the stance of Mr. Grbesa working the beer taps at the further end of the restaurant made me envision that he long ago when discussing the finer details in the decoration of the restaurant had said to his wife, “Honey, you get to decide on the porcelain and the textiles but, I want one of these beer taps!”

We were absolutely bowled over by the generous portions of food and the heart-warmingly friendly customer service.

Our visit to Zum Dachs was like spending an evening with family. The family Grbesa more than captured our hearts. We recommend anyone going that way or living in Munich to pay them a visit.

In the blue guide, the original Guide Michelin, the system of grading roadside restaurants called for giving one star to those that was worth visiting, two stars to those worth a detour and three stars to those worthy of a special journey. To me Zum Dachs should definitely have made it in there somewhere.

Zum Dachs can be found at:

If you speak any German and you’re on your way there, please say Hello from us, in Sweden.