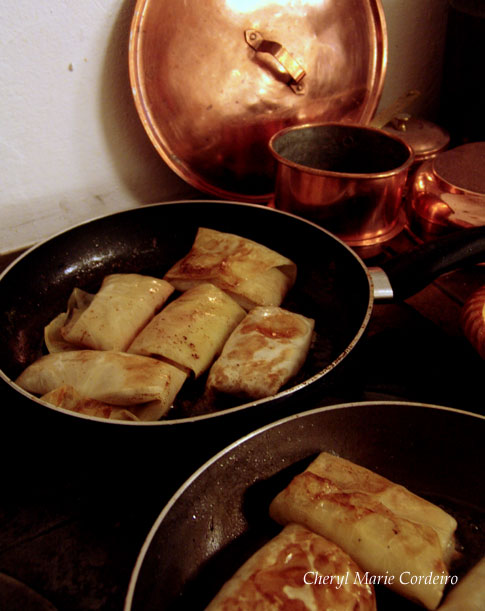 This traditional Swedish dish has its origins in the Middle East where the Swedish King Charles XII and his army took shelter for a while during a war with Russia. The dolma, which is the Turkish name of a common cabbage wrapped meat dish is thought to have been imported name and all into Sweden by the early 18th century. Today kåldolmar is an old fashioned traditional staple food in Sweden that sadly, fewer and fewer can find time to cook.

Making these cabbage wrapped meat packages takes quite some time. You can expect to set aside an entire day or the best part of the afternoon to do this. A great weekend activity if your weekend allows for it. On the upside is that they deep freez well and you can make a large batch of them in one go. It is also not very expensive. What goes into them is mostly time.

The kåldolmar or cabbage “dolms” are served warm with boiled potatoes and lingonberry jam.

A white sauce goes with the kåldolmar and for that you’ll need:

Begin by settling the cabbage head in a large pot of water, with enough water so that it covers the entire head of the cabbage. Salt the water and set the pot on low heat. The entire secret here is to cook the cabbage head at low heat for a long time, so its gets done all through.

We like to use a 19th century wood stove for a lot of cooking since we have found that its low heat brings out the flavors and in general treat all food stuffs better then modern owens. In this case the low heat will cook the cabbage head right through without turning the outermost layers of the cabbage to pulp. This process, depending on the size of the cabbage head, will take maybe 3 hours or more.

When the cabbage is cooking, prepare the minced meat mixture. In a large pot, combine the minced meat with salt, peppar, rice (or barley as I have done here), eggs and cream. Mix well. The mix should be soft enough to stir. Now you are done until the cabbage is done. A traditional Nyonya would now spend the afternoon playing cherki. 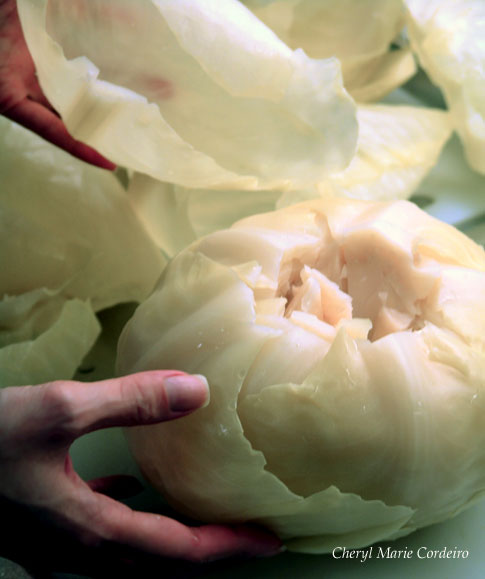 The cabbage head, boiled through on slow heat or low fire.

When the cabbage is done after whatever time it takes, it becomes slightly translucent. Now peel off the warm and slightly elastic cabbage leafs one by one under a tricklestream of cold water, to not scald your fingers.

Trim the hard bits of the cabbage leaves (at the base) and the leaf is ready for wrapping.

Continue to reduce the broth. This will be needed for the sauce. 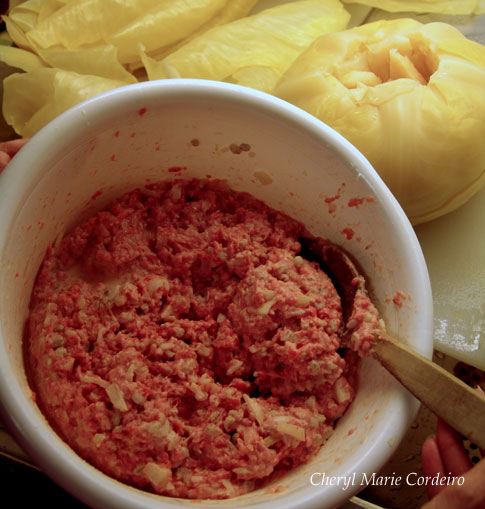 The minced meat mixture with barley, ready for wrapping.

Once the cabbage leaves are trimmed and sorted, the larger leaves are preferable to work with, place a dollop of the minced meat mixture in the center of the cabbage leaf and fold the leaves tucked in at the sides so that the meat doesn’t escape from the leaves during cooking. Some use stings, some use a tooth pick to keep the dolms closed. If you have managed to slow-cook the cabbage, here comes the payoff, since pinning the leaves shut will not be needed. 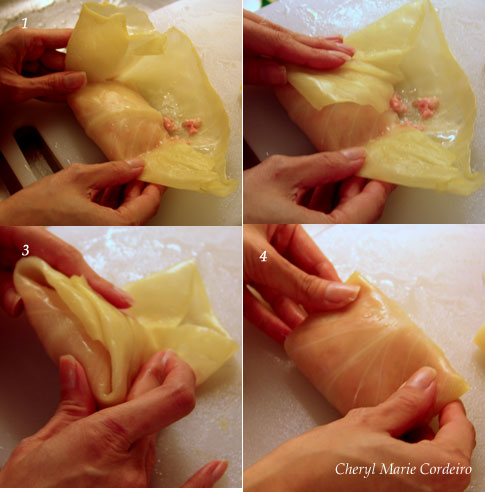 Wrapping the cabbage leaf around the minced meat mixture. 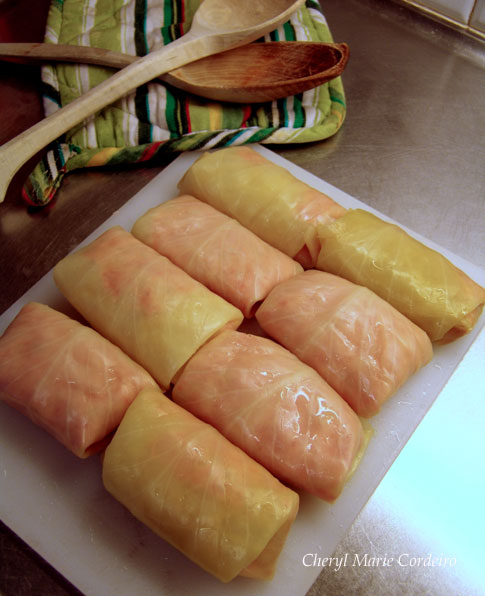 Once the packages are ready, you can place them in a hot buttered frying pan and brown them on both sides (as shown in the first picture above). If you prefer, frying could be skipped and you can plunk the “dolms” in the oven pan directly.

Now begin to work on the white sauce for this dish while the cabbage packages are frying, beginning with melting some butter and adding the flour. Fry this combination for a few seconds and then add cream, a meat cube, the cabbage broth, some brown syrup. Add salt, white pepper and a few drops of soy sauce to taste. Stir continuously, so that it doesn’t overboil. 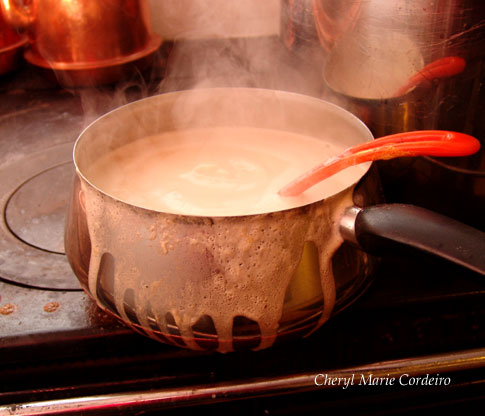 In these cases, don’t stir the sauce as it might be burnt at the bottom. Simply transfer the sauce into a clean pot. Hide all evidence of mishap from husband / guests and play Iron Chef!

When the cabbage packages are browned on both sides, lay them out evenly in an ovenbake dish. 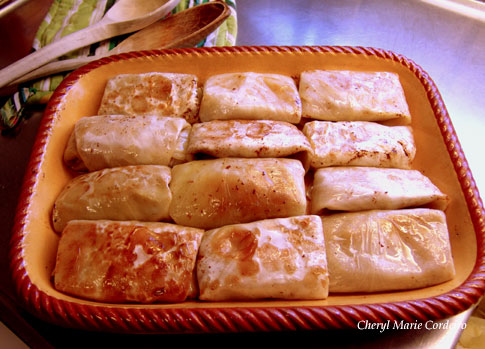 Kåldolmar laid out in an oven friendly dish, before the baking process.

Put some slices of butter on each of the “dolms” and drizzle some dark syrup on top of them. Set the dish on the lowest shelf in the oven, on high temperature, ca. 200 deg C and bake until they have become thorougly browned; 20 minutes, flip sides and then 20 minutes more is usually enough. 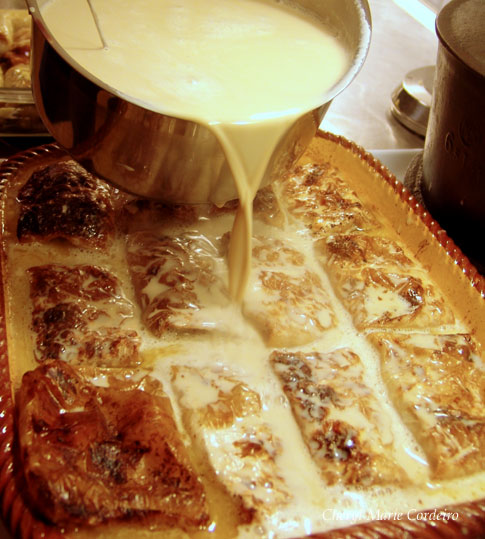 Pouring the sauce over the cabbage wrapped meat packages.

Now pour the sauce over the brown, cooked packages and set them in the oven again. Scoop the sauce from the dish over the packages every five minutes, for flavour and to keep the packages from getting burnt.

Serve with boiled potatoes and lingonberry jam. It can also be served with rice.

One thought on “Swedish white cabbage meat wrap or Kåldolmar”