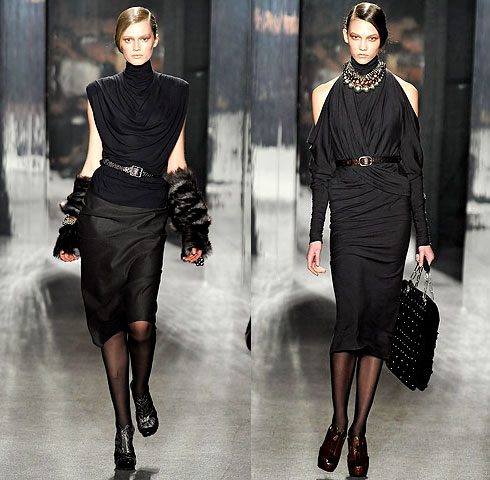 In On the Street | Fashion Barometer, Bill Cunningham wondered about the impact of the financial crisis on world fashion – what kind of silhouettes and hemlines would we witness in the upcoming season/s that would reflect the times?

I think women these days, more than previous years, would be more conscious about what they’re choosing to buy. Michael Kors, commenting in the New York Times Multimedia said that, “…right now, even the most extravagant woman is putting on her smart cap…my customer is more pragmatic than she has been” He noticed black being sold in his Florida stores where normally, he wouldn’t sell black in Florida because “she thinks she can wear it more than once, she’s afraid of buying something that is a quick toss”. He also noted that women these days would prefer purchasing pieces that can be put together and re-ensembled easily with what they already have in their wardrobes because if it’s expensive, the customer these days thinks about it, tries it on and is smarter about her purchases. 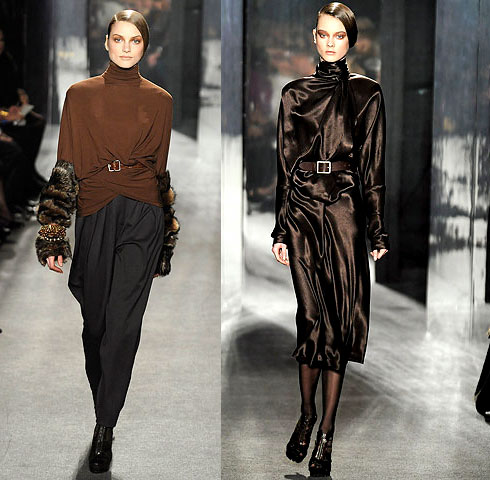 Draped over the shoulders with no shoulder seams is something I’m loving at the moment by Donna Karan, Autumn / Winter RTW 2009. Picture: Style.com

Donna Karan’s AW 2009 RTW collection is one that hits home with me and one that echoes Michael Kors’ impression of the customer today. Hers is a collection with pieces that can do just that – mix and match in predominantly dark colours and smart relaxed lines that more than reflects the season. Her draped jerseys echo the theme of looser fitting clothes (see Derek Lam AW09 collection for similarly draped theme dresses). The lines are still lean and chic though but with a relaxed approach to power dressing. A hint of some 1920s and 1930s strong shoulder, small thin belted waistlines are also evident in her collection.

During hard hit times where people are tightening their belts, larger cut clothing or clothing slightly larger than the frame begin to feel ‘about right’. It’s economical to buy clothes that are a little too large, just like how you would buy larger clothing for children so that they’d grow into them. Larger clothes give you the possiblity of layering, of keeping warmer in the winter days and it is perhaps this that explains the various renditions of ’80s styled clothes on the runways for AW 2009. 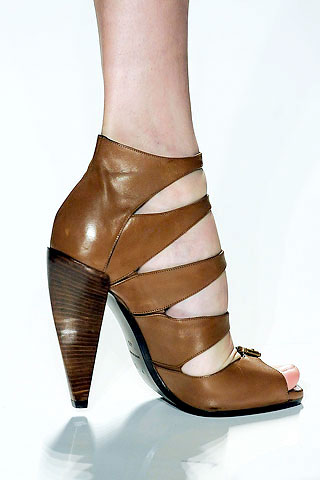 It isn’t just clothes that have gone versatile but shoes that can take you from season to seaon without having to change them, have also come up smart and multifarious in function. Beginning a few seasons ago Prada and Chloé’s cut-out boots, these designs seem a staple today in bringing you from spring to autumn. Pair them up with warm wool leggings and you’ll have some perfectly in vogue winter shoes as well.