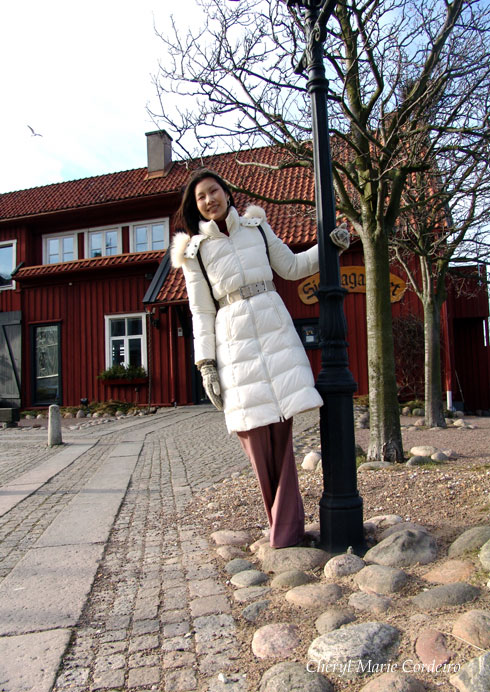 The restaurant Sjömagasinet in Gothenburg, Sweden, is well known, as is its iconic owner and Chef de Cuisine Leif Mannerström.

What might be less known is that the restaurant’s odd looking building at the immediate waterfront of the Göta River was originally an 18th century magazine, built by the Swedish East India Company (1731-1813) to house spare equipment for the huge sailing “East Indiamen” ships.

These frigates went on their yearly voyages to China and back for tea, silk, spices and porcelain during the best part of the 18th century, departing from just outside this building around February each year. They usually arrived back in the late summer after a voyage that took almost two years for each round-trip, if everything went well. If not, the arrival could be delayed. As a matter of fact, there are cargoes that still haven’t arrived as yet, but that’s a different story. Today we were just here to eat.

Luckily our careers give us the opportunity and occasion to travel quite some. Valentine’s Day last year was spent at the Peninsula Hotel in Bangkok, overlooking some fantastic fireworks reflecting to double effects in the black waters of the Chao Phraya River. This year we visited Sjömagasinet in Gothenburg, Sweden, immediately overlooking the near frozen Göta River. The differences in climate and temperatures could not have been greater.

Gothenburg is located at 57°43′ North latitude and 11°59′ East latitude meaning about three hours of flight northeast of London and much too far north for comfort for anyone preferring the tropical climate of Singapore. Luckily there are things here to compensate the endeavours.

The gourmet restaurant Sjömagasinet is one of them.

The history of the restaurant’s building is somewhat reflected in the menu but most of all, it shows to tell of Leif Mannerström’s great interest in gourmet preparation and serving of various piscatorial delights. What we chose for our Valentine’s day dinner was of course only a sample of what could be had at the restaurant.

The menu for the day is set on the day itself with not much advance notice. The availability of first class ingredients settles what the Mannerström team will work with for the day, so you can simply pop in and enjoy. If you like, you can discuss with the forthcoming staff, anything you’d like to have served from what is available in the kitchen for the day.

On the menu you can expect to find weever, plaice, pollack, halibut and herring served in classic and creative conconctions. During the Christmas season, the julbord or Christmas smorgasbord, serves up to more than sixteen types of herring.

The dishes we decided upon were what we felt right for the day. As we sat down at our table ready to enjoy ourselves, we brought with us three distinct impressions: that of the ice-cold weather of the Nordic climate, the ever present Göta River that flows just outside this restaurant and the warmth from the burning log fire that greeted us at the entrance of the restaurant, when we first came in.

Today I initially felt like the Fish Classic, a deep fried cod tail with sauce verte, lemon, asparagus and boiled potatoes. But while settling in and warming up to the mood of the place I started to feel somewhat more adventurous.

Contrary to my expectations the meat dishes seemed just as interesting as the fish and my curiosity was really aroused when I found elk among Mannerström’s Husmanskost.

I have only ever encountered a live elk once in my life, in a national park here in Sweden. These large creatures wander the vast forests of Sweden and are freely hunted for food. About 100 000 elks are shot in Sweden every year and at an average weight of about half a tonne (1000 lbs) each, it’s a lot of meat. With elk meat, the inherent problem I find is how to cook them. Apart from that they don’t exactly fit neatly into the oven, the meat is usually tough and gamey. My previous experiences of eating elk were not encouraging. But if there ever was going to be a chance I’d eat elk again then this would be the place. So elk, it was. 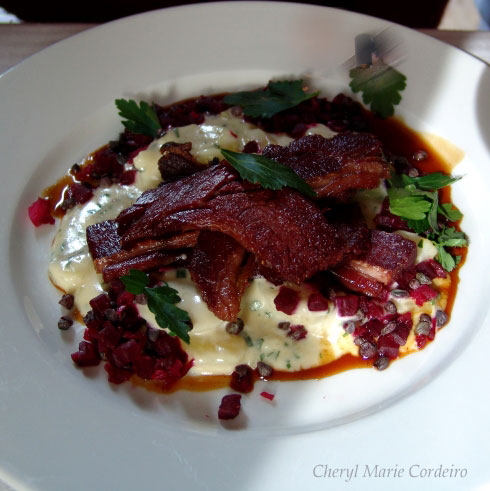 The elk briskets were tender, warm, juicy and inviting on a bed of beetroots and potatoes cooked in cream sprinkled with parsley leaves. The flavours combined and blended splendidly with one another to give a robustly warm and accommodating meal. The dish was also testament to what could be produced with basic ingredients that were none too fancy. 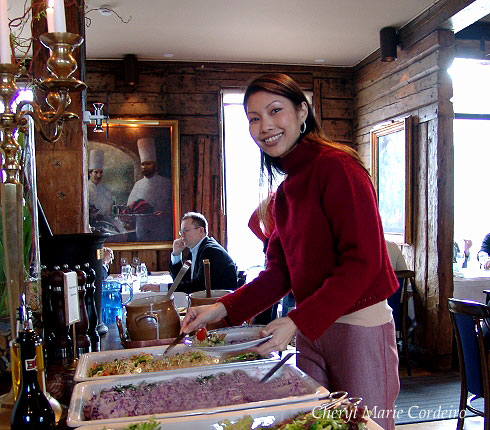 At Sjömagasinet’s salad bar. Though not extensive, the greens were well prepared with complimentary salad dressings and fresh baked bread.

The salad bar offered a salad of barley, ripened tomatoes and mushrooms. While I took delight in the ancient gladiators favourite grains and its health benefits, it was the fresh home baked bread, light in its texture that caught my heart. I felt it strange that something as simple as fresh bread straight from the oven could heighten my senses and carry me hundreds of years back in time, whilst contemplating the dark tanned log walls of the restaurant. 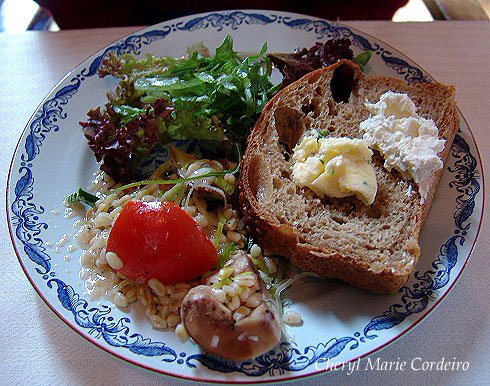 Starters, a barley salad with ripened tomatoes and mushroom. A light bread topped with parsley butter and a cream cheese.

One light dish offered was Swedish bleak roe from Kalix served with red onions, chives, sour cream and butter fried brioche. This dish was a splendid starter, it hails from the North Swedish Kalix river that lies well above the arctic circle, where the fish are fetched. The secret touch of the chef was a diaphanous streak of reduced port swiped onto the plate, that opened up a universe of flavours when combined with the roe and brioche. 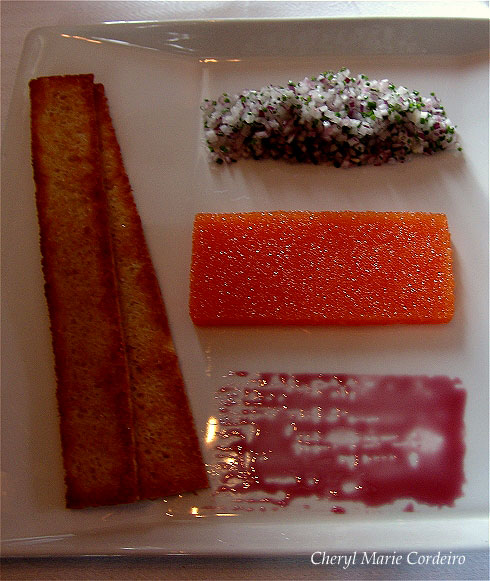 A starter from the à la carte menu, Swedish bleak roe from Kalix.

Duck breasts in medallions were served as the main course from the à la carte menu, and we were absolutely delighted when the dish was presented on a crisp glass dish so clearly inspired from and reflecting the icy surroundings of the Göta River. The duck breasts with the pan fried duck liver were fiercely decadent with a soft, smooth texture that melted in the mouth. Irresistable! 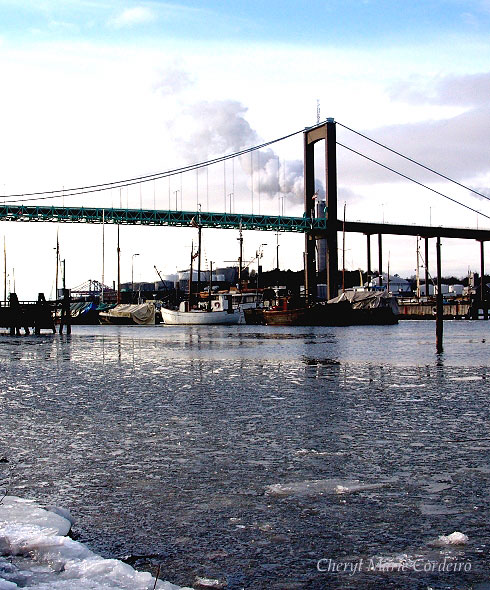 One of the inspirations we brought with us to our table – a view of the frozen banks of the Göta River just outside Sjömagasinet, Gothenburg. 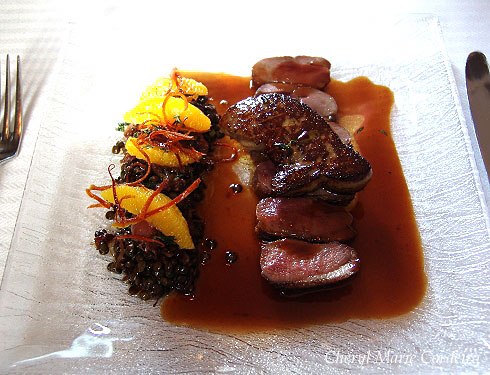 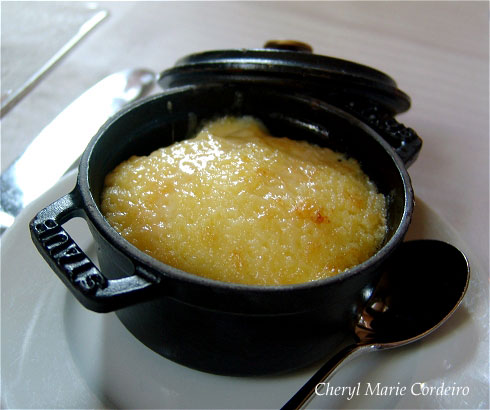 Served on the side together with the duck breasts was a velvety puree of almond potatoes topped with gratinated Gruyére cheese. 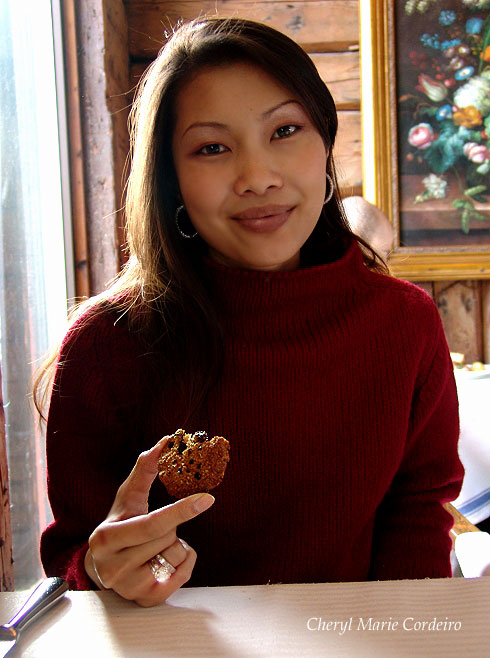 For dessert, it was pure black coffee and oatmeal raisin cookies from the kitchen!

It was a wondrous dining experience at Sjömagasinet, where the Mannerström team had proven their metier beyond all things piscatorial.

One thought on “Sjömagasinet’s team proves their metier beyond all things piscatorial. Gothenburg, Sweden 2009”