Fettisdagen or Fat Tuesday, a day for semlor in Sweden 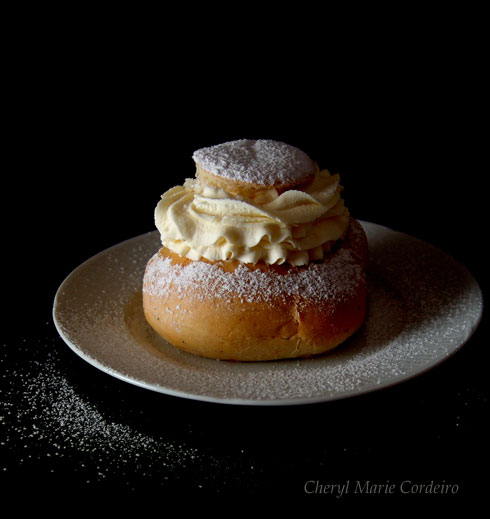 Today the original meaning of ‘Fat Tuesday’, as the day when all fat and other perishables should be consumed before Lent, is lost on most Swedes. However, the tradition of eating typical Fat Tuesday buns is kept alive and well.
Filled with almond paste and whipped cream, the ‘semla’ dates back to the 16th century. Records suggest that they first became popular in Sweden in 1541.
On February 12, 1771, the Swedish King Adolf Fredrik reportedly passed away after consuming a luxurious banquet rounded off with 14 of these buns, served in a bowl of warm milk.
Photo for CMC by: Jan-Erik Nilsson © 2009.

One of my more favourite days in the Swedish year is Fettisdagen or Fat Tuesday, which corresponds to Shrove Tuesday in the United Kingdom, Ireland and Australia and Mardi Gras in the USA and France. Though Sweden in itself is rather secular, Fettisdagen marks the last day before the period of Lent in the Christian tradition, a period of fasting and abstinence before Easter. And while some mark this day by feasting on pancakes, the Swedes have it as a day of eating semlor (singular: semla).

According to Göteborgs Posten (GP), the people of Gothenburg will be 10 tonnes heavier today with sales of more than 200,000 semlor. Costing between 25 – 27 Swedish crowns or thereabouts $5 – $6 Singapore Dollars a piece, a semla is a cardammon baked bun filled with sweet almond marzipan and topped with the creamiest of whipped cream. Its lid is dusted with fine icing sugar before serving.

In the cold Nordic winter days, the semla brings comfort to the core of the soul and it is exactly as the day attributed to it describes – fat – with about 15 g of fat per serving and 300 calories. Semlor actually begins selling about two weeks prior to Fettisdagen and if you’ve eaten 20 semlor without burning them off, you’re likely to have put on 1 kg (Peter Lenken, GP, 24 Feb. 2009).

GP has also posted their annual blind test verdict on the best semlor in town. They’ve selected the semlor from the bakeries and outlets that have already attained a track record of the best tasting semlor for several years in a row. The bakeries that made it out tops are, not surprisingly two of my favourite bakeries in town Brogyllen konditori and Steinbrenner & Nyberg. Brogyllen is a café that sits at the cozy coner of Våstra and Södra Hamngatan in Gothenburg, where trams turn the corner and buses go by every twenty minutes. The tall glass windows in the café allows you to sit, enjoy that cup of coffee with your semla and watch the city go by.

Our preferred way of eating a semla is to have it sitting in a bath of warm milk served in a deep bowl in true North Swedish tradition. We can worry about working off the calories another day.

2 thoughts on “Fettisdagen or Fat Tuesday, a day for semlor in Sweden”