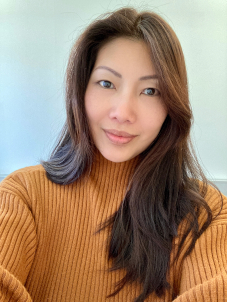 I was born in Singapore of Portuguese and Chinese heritage (Eurasian). I had most of my education in Singapore up to tertiary level, after which I moved to Sweden in 2002 to pursue a doctoral degree in applied linguistics at the University of Gothenburg.

I currently work as Project Manager, focusing on EU and international projects, at RISE Research Institutes of Sweden, at the Division of Bioeconomy and Health, Department of Agriculture and Food. My office is located in Mölndal municipality. Mölndal, known also as the Valley of Mills, is located about ten minutes by bus ride from the city center of Gothenburg to the south. If you’re ever traveling south from Gothenburg to Malmö, whether by train or car, you will likely come by Mölndal municipality.

In these pages at cmariec.com, you’ll find my lifestyle musings on culinary and travel adventures from Singapore to Sweden, and from when I lived and worked the Arctic City of Tromsø (2018 to mid-2022).

Pursued all academic interests in Singapore, of which the post-graduate years were founded in two separate disciplines.

(ii) Master of Arts in the English Language at the National University of Singapore (NUS).

In 1999, represented the Republic of Singapore at the Miss Universe Pageant in Trinidad and Tobago. With this came a variety of film, educational TV, media, and ambassadorial work for the Singapore Tourism Board.

In 2002, moved from Singapore to Sweden in order to pursue a PhD in Gothenburg, where a number of international corporate head offices were located that all had a substantial business presence in Singapore and also Asia in general.

In 2009, graduated with a PhD in applied critical linguistics from the faculty of humanities at the University of Gothenburg, with a cross-disciplinary thesis entitled, Swedish management in Singapore: a discourse analysis study, looking particularly into the concepts of assimilation, integration and hierarchy, at top management levels of Swedish-Asian corporations in Singapore.

2015, was granted the Flexit post-doctoral scholarship by Bank of Sweden Tercentennary Foundation (Riksbankens Jubileumsfond, RJ) for a three year project together with the Swedish-Swiss multinational enterprise ABB. From 2015-17, the research will take place at ABB Corporate Research Sweden HQ in Västerås, and at CIBS during 2017-18. The research focus of the project is how new technologies are perceived and accepted by users and customers, using linguistic methods of data analysis. More information can be found at RJ’s website, at Riksbankens Jubileumsfond (RJ) Felxit 2015.

2018, late summer. I acquired new work as Market Scientist at Nofima. Having moved to the county of Troms in August, I’m currently enjoying myself, exploring the island city of Tromsø. From the 1900s, this city became known as Paris of the North due to how the people of Tromsø were exceptionally stylish and sophisticated in contrast to the fishing village preconception that many might have of a city located in the Arctic Circle.

In my years in Sweden, I have known Sweden to be called the land of the midnight sun. During the long summer mights, it was beautiful to sit and watch the sun’s languid pendulation between east and west, touching the horizon out at sea before going up again. Northern Norway takes this languid pendulation of the sun to the extreme. It is not only known as the land of the midnight sun, but it is also the land of polar nights and the northern lights. This is my new adventure. And in these lifestyle blog pages, you’ll find my personal thoughts, insights and musings.