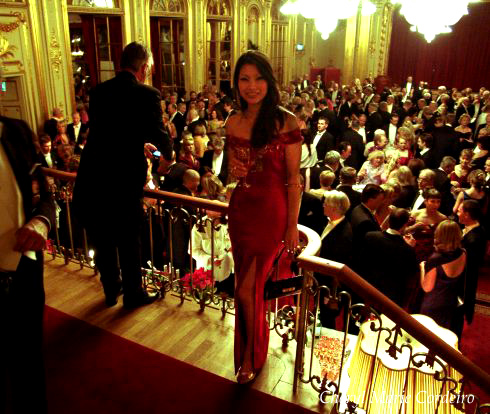 In a sea of tailcoats, in the Hall of Mirrors, Spegelsalen. I am wearing a red silk dress with pearl appliqués, designed by Francis Cheong in Singapore. The purse; a Louis Vuitton Monogram Vernis Sunset Boulevard in Amarante, from the LV shop in Stockholm. Kungliga Klubbarnas Fest, Grand Hôtel, Stockholm 2009.
Photo for CMC © J-E Nilsson and Cheryl Marie Cordeiro, 2009.

On Friday the 13th, March 2009, the bi-annual event of the Fyra Kungliga Klubbarnas Fest was held at the Grand Hôtel in Stockholm. Grand Hôtel is situated in the very heart of Stockholm beautifully overlooking the River Strömmen, which is such a defining feature of the city. Just opposite, on the other side of Strömmen, is the Royal Palace and Gamla stan (the Old Town) of Stockholm.

The event was hosted by the Royal Swedish Motorboat Club and co-hosted by the Nation of Italy, and was most notably graced by the presence of H.M. King Carl XVI Gustaf and H.M. Queen Silvia of Sweden. 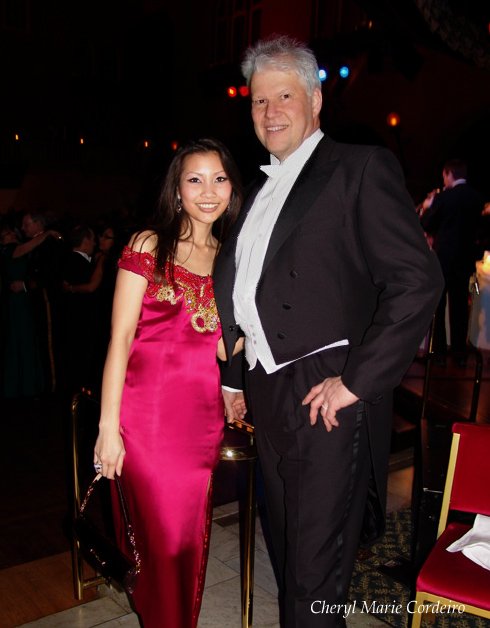 Champagne reception in the Hall of Mirrors

The evening began most pleasantly with a Champagne reception in the Hall of Mirrors (Spegelsalen), a magnificent ballroom decorated in gold, white and red. Ever since its opening in 1899 it has been the scene of countless conferences and brilliant parties. This evening was no exception as it held all the splendour of a White Tie event, a modern ball filled with a touch of magic! Ladies arrived dressed in their best fur coats only to reveal even more beautiful ballgowns in jewel toned fabrics. The men came dressed in full evening dress, some even with a top hat, and some in their mess dress. 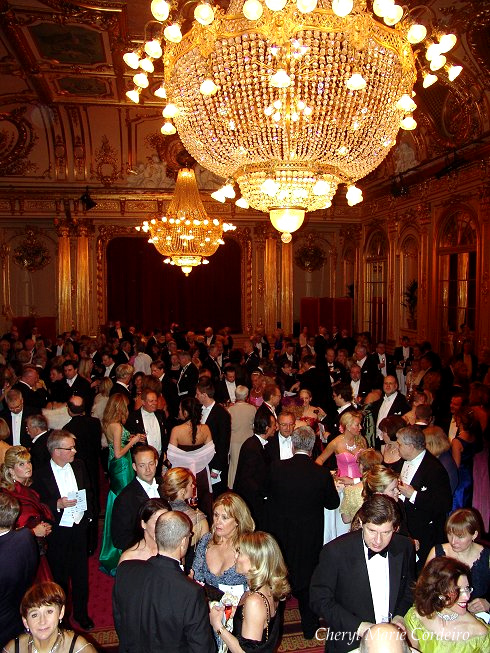 The Hall of Mirrors, Spegelsalen, Grand Hôtel, Stockholm during the Kungliga Klubbarnas Fest 2009, its architectoral inspiration taken from the Galerie des Glaces in Versailles

The Hall of Mirrors has four large mirrored doors on either side, beautiful paintings on the ceiling and two giant crystal chandeliers with gilded frames. Standing in the middle of it, it most of all reminded me of the gallery at the second floor of the Opera Garnier in Paris. The hotel however, maintains that the hall’s architecture was inspired from its namesake, the Galerie des Glaces in Versailles. Perhaps both are versions of the same truth. 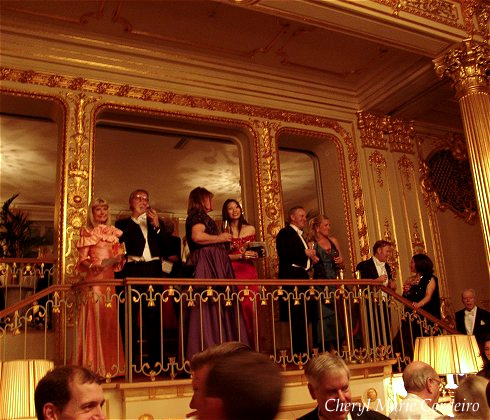 Mingling on the balcony in the Spegelsalen or the Hall of Mirrors at the Grand Hôtel, before the dinner and dance.

It was also in this room that the first Nobel Prize giving ceremony and banquet took place in 1901. The event continued to be organized here up until 1929 after which the Nobel Foundation decided to move the banquet to the newly built Stockholm City Hall. Today, the Laureates and their families continue to stay at the Grand Hôtel in connection with the event.

The list of royalty, heads of state and artists who have stayed at this hotel is impressive. It also sports one of the most expensive Hotel Suites in Sweden, the Princess Lilian Suite, available at around $10,000 USD per night. Its 330 square meters of floor space includes a private movie theatre and a private spa.

Dinner in The Winter Garden 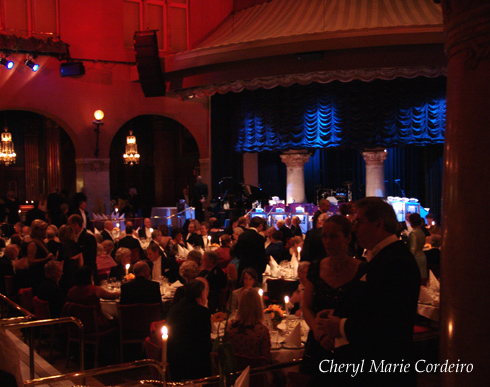 The dinner was set in the large indoor open area, called the Winter Garden, at the Grand Hôtel.

The architecture of the great indoor area called the Winter Garden is a bit of a happy nightmare if there ever was such a thing. It was inaugurated this year, one hundred years ago and built in something of a Spanish style with a touch of Moor, with windows, balustrades, balconies and bay alcoves facing inwards. It is a grand venue for large indoor events that benefit from this prestigious and central location. 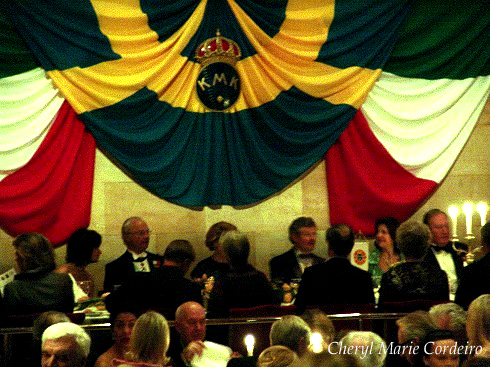 All guests were seated in advance of the arrival of the guests of honour H.M. King Carl XVI Gustaf and H.M. Queen Silvia of Sweden with their entourage. H.M. Queen Silvia appeared in a silvery green silk brocade outfit, adorned with a most elegant ruby pendant set with diamonds. She looked stunningly beautiful.

The dinner tickets that we had been adviced to keep, turned out to be lottery tickets. A traditional party entertainment, that turned quite exciting when the winnings were Rolex watches, Italian luxury resort stays, Armani suits, laptops etc. The drawing of the winners was assisted by Queen Silvia and made even more enjoyable by the forgivingly witty comments from the conférencier for the evening, Lydia Capolicchio from the Italian Chamber of Commerce. 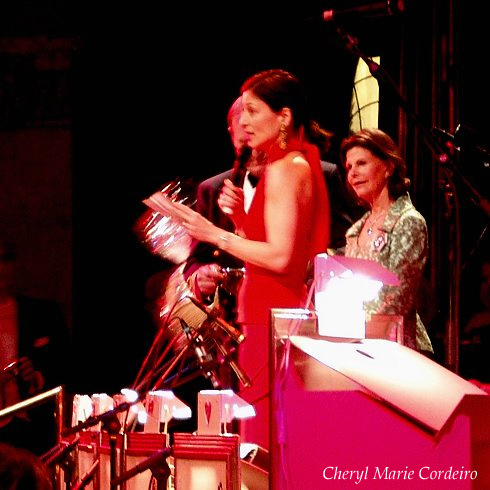 A wonderfully personal touch was when H.M. Queen Silvia joined the conférencier of the evening, Lydia Capolicchio from the Italian Chamber of Commerce, to help draw the winning lottery numbers.

True to the Swedish traditions, several dinner speeches were also made at this event, one of which was by the Italian Ambassador Anna Della Croce Brigante Colonna. 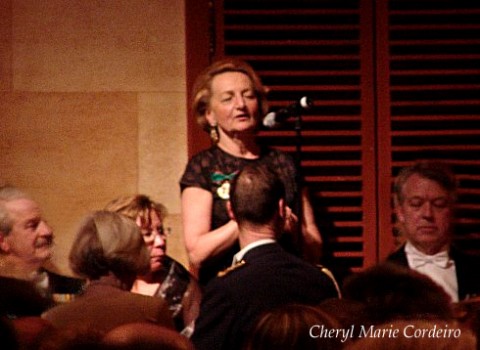 With the Italian-Swedish relations in focus and as theme for this evening’s dinner, the Italian Amabassador made some good points in her speach that touched upon Swedish-Italian cooperation in tertiary education. Personally I would have expected to hear more about first class industrial design, food quality awareness and the fashion industry, where I feel that Swedes and Italians have many common areas of interest.

Since we too, are big fans of Italian design, fashion and cooking traditions, we had looked forward to this event with great expectations. 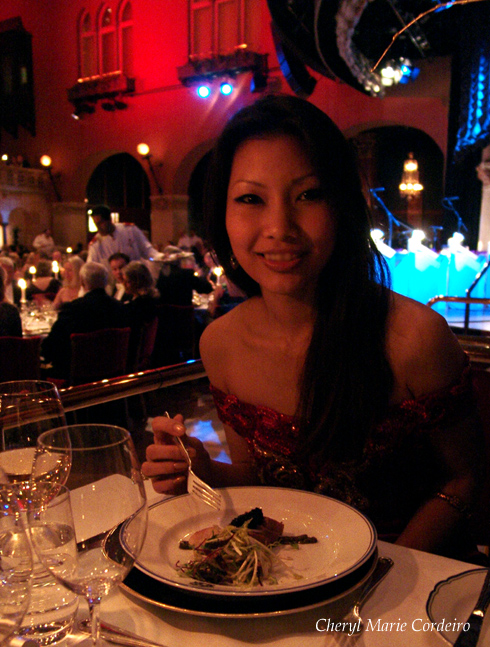 Myself, with the entrée, which was blackened yellow fin tuna with grilled scallop topped with Avruga caviar.

During this dinner, I particularly appreciated the adventurous entrée. It was a composition of blackened yellow fin tuna with grilled scallop and Avruga caviar. On top of the caviar were a few delicate strips of ruccola salad, laced with a light balsamic vinaigrette that added some bite to the scallop. This promising dish was served with a well-chosen white Canaletto Chardonnay Verdeca.

Compared to the entrée, the main course offered few surprises. It was the most tender fillet of calf you can imagine, gratinated with mascapone and topped with artichoke heart. A silver bowl filled with butter fried small potatoes came on the side, accompanied with a porcini mushroom sauce or, Karl Johan mushroom sauce, as it is known in Sweden. This rich brown mushroom sauce was possibly flavoured with a drop or two of a dry Marsala wine. Also on the plate, some fried tomato and haricots verts with pancetta. The accompanying wine to the main course was a red Canaletto Montepulciano d’Abruzzo.

The desert was an expected Tiramisu. 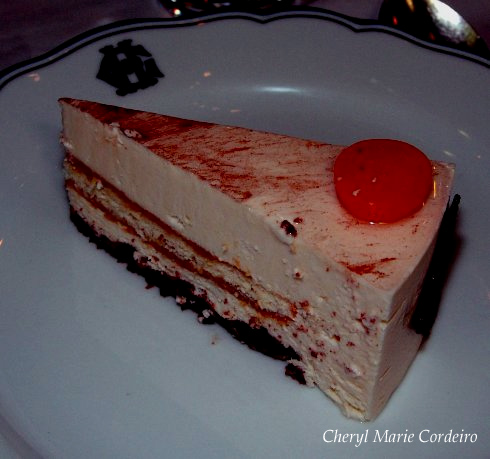 A Swedish-Italian fusion tiramisu (“pick me up”).

We have had quite our fair share of eating and baking Tiramisu since our visit to Italy last year and this version of Tiramisu, we would certainly call an attempt at a Swedish-Italian fusion bakery. A Swedish rulltårta or sugar-cake, replaced the Italian Savoyard biscuits in between the mascapone mixture. The Tiramisu sat on a slim layer of chocolate coffee cake.

As avec, a full flavoured Grappa Nardini was the given choice, considering the theme of the evening.

During the dinner the guests were entertained by the beautiful voice of the soprano Sara Rossi, accompanied by Raffaele Cortesi on pianoforte. I don’t know if it was the evening as such, the superb sound system or her singing, but it was grand, happy and beautiful. 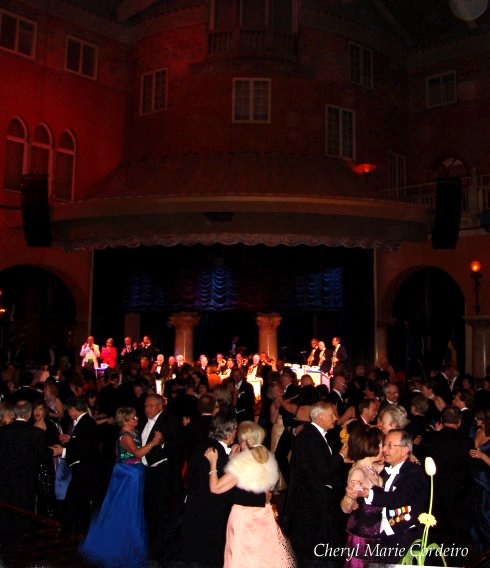 Guests, dancing to a string of Big Band classics presented by the Ballroom Big Band.

After the dinner the main floor was cleared of tables and the music and the dancing started. The music chosen for the night was a nostalgic string of Big Band classics, presented by the Ballroom Big Band – what a fantastic Grand Finale for a great evening out! 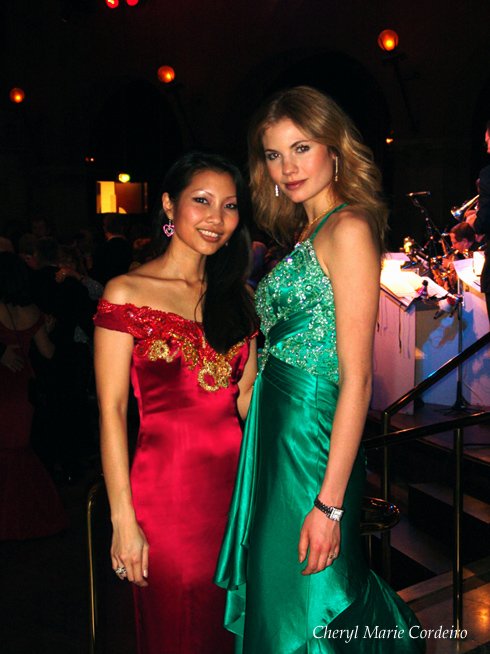 Myself together with Melinda Malmberg, who will represent Sweden at the upcoming Miss Model of the World 2008 pageant,
Kungliga Klubbarnas Fest 2009 at the Grand Hôtel in Stockholm, Sweden.

The evening mellowed out with some after-dinner mingling and some dancing. Many gathered at the bar for a few drinks, before heading home. 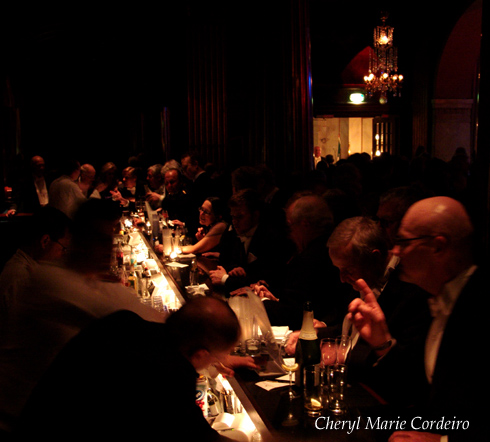 After the dinner everybody took their time to mingle, chat and dance. The commerce at the bar after dinner was brisk. Grand Hôtel, Stockholm 2009.

We would like to give our thanks and appreciation to our hosts, the KMK and the Fyra Kungliga Klubbarna whose evening this was, and the Nation of Italy through their representatives the Italian Embassy, the Italian Chamber of Commerce and sponsoring companies, for a splendid evening out in Stockholm!