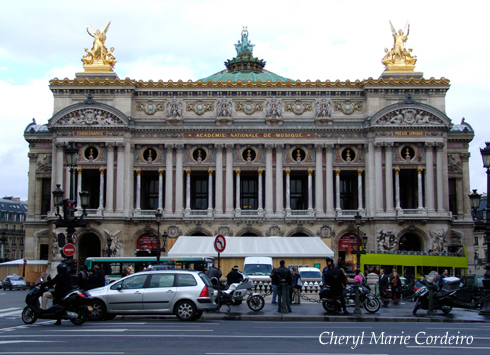 Just consider that they started to plan this building with its surrealistic grandiosity less than half a century after the French Revolution in 1793, when Louis XVI and Marie Antoinette had been publicly beheaded because of their opulent life style.

The realization that there actually is an indoor lake under the basement make you half and half believe that there probably is a phantom somewhere in there too. All sets the stage in our minds for a great theatre play. You just need to step inside and the grand entrance staircase will within the blink of an eyelid place you in the spotlight, on stage in the theatre of life, cast as the star. 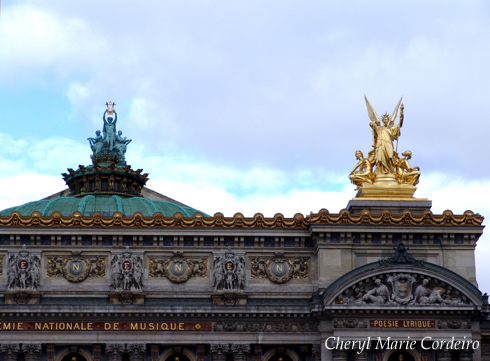 On the roof are sculptures of Apollo, Poetry and Music by Aimé Millet and Liberty by Charles Gumery.

The grandeur strikes you already when you set your eyes on it from across Place de l’Opéra. Above the golden frilly edge of the roof are statues of Apollo, ‘Poetry’ and ‘Music’. This is the ideal setting and one can think that Gaston Leroux’s Le Fantôme de l’Opéra (1909) must have basically written itself. This was also the story that was later adapted by Andrew Lloyd Webber to the musical, The Phantom of the Opera in 1986 and became one of Broadway’s longest running musicals of all time. I can’t even write the title without hearing the theme in my mind. 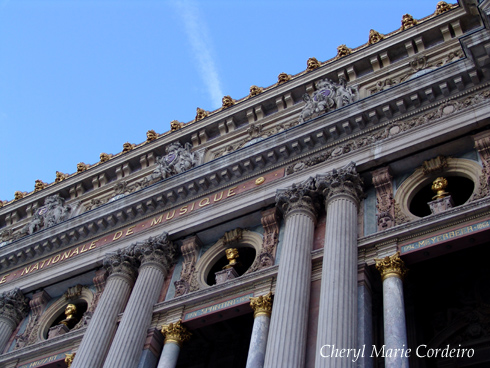 Bronze busts of Beethoven and Mozart on the front façade of the Opéra Garnier in Paris.

The very aura of the building invites dramatic stories to be told and enacted. 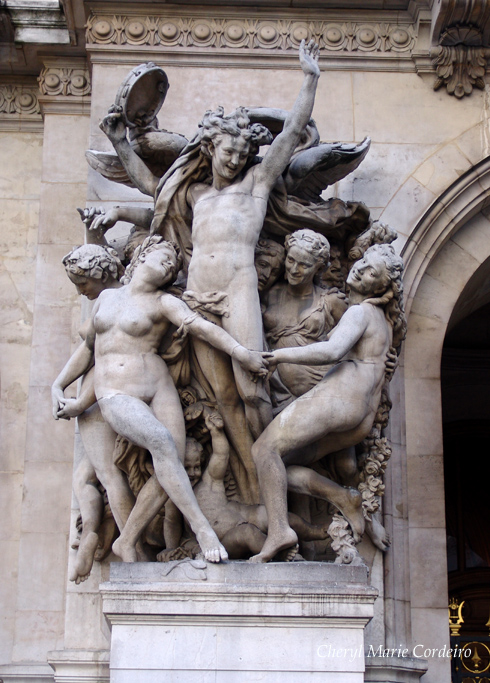 Sculpture of dancers entitled, The Dance by Jean-Baptiste Carpeaux.

Charles Garnier was also the architect of Le Grand Casino in Monte Carlo that opened in 1879.

Le Grand Casino, housed together with the Opéra de Monte-Carlo, is a smaller version of the Paris opera, scaled down to a quarter of the size of the former but still in a league of its own, since it was originally also Prince Charles III’s private theatre.

The Opéra Garnier was nonetheless completed and when comparing Garnier’s two works, you’ll find the former far more elegant in design compared to latter, where Le Grand Casino seemed weighed down by fixtures too large and heavy to sit on its walls. 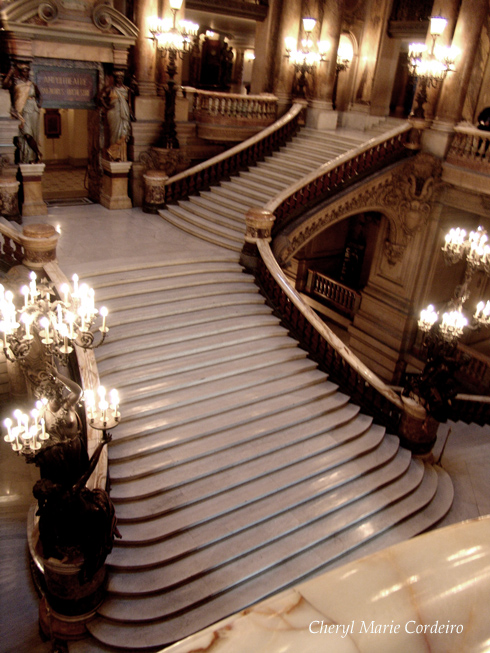 The grand staircase at the Opéra Garnier, Paris, France.

The grand escalier greets you as you come into the Opéra Garnier. It’s elegant marble cascades serve not only to lend an indelible impression on its visitors but to invite all guests to be part of the theatrical scene. It is right here on these steps that ballgowns with trains and costumes as evening wear more colourful and larger than life, find their place at home. Guests are there as much to be seen and noticed, as are the actresses on stage. The grand escalier, constructed as a real life stage where guests in their splendourous outfits are meant to be seen by others from around and above.

Golden gilt ceilings greet you as you explore the ceilings of the building, never allowing you to forget the deep extravagance of the place. 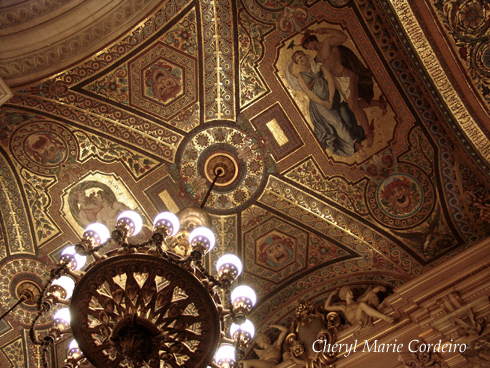 The golden gilt ceiling of the Opéra Garnier, seen on the first floor of the building. View from one of the side wings on the first floor of the Opéra Garnier. 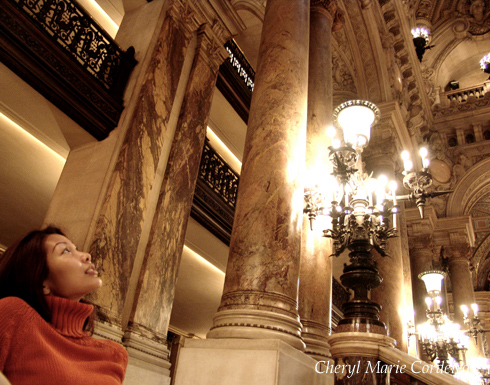 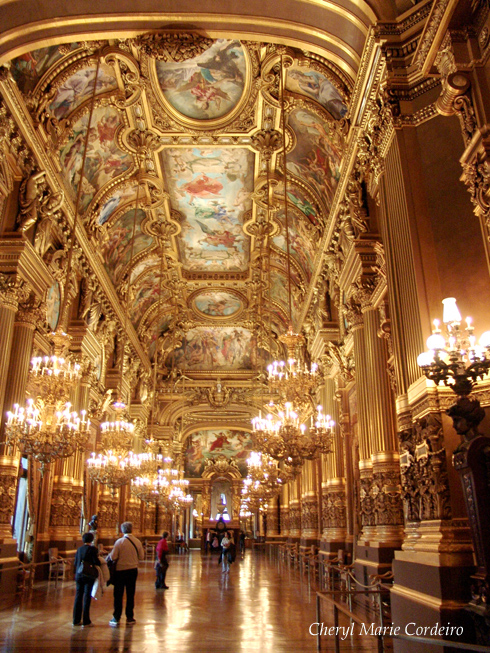 Le grand foyer, the Foyer de la Danse with paintings on the ceiling by Chagall, in the Opéra Garnier in Paris.

Moving on from the comfortable and expansive grand staircase, I experienced a slight vertigo upon entering the most decadently decorated area of the building in the style of Napoleon III (apparently), Le grand foyer. It was everything OTT (over the top). But it was here where guests were meant to mingle during the intermissions. The hall once again sets the stage and the reception for guests dressed up in clothing and jewellery fineries.

Recovering from the first impact of the all the gilt, the hall got more pleasant as I orientated myself. After a while, one does get used to the glittering chandeliers and the colourful Chagall paintings on the ceiling framed by all the golden meringue decorations.

Le grand foyer’s design in l’Opera Garnier seemed to have been made to look like Versailles’ Hall of Mirrors, both of which might have inspired The Grand Hotel’s Spegelsalen in Stockholm, Sweden. All halls had similar gold gilt decorations with tall windows and mirrors that enlarged the alrady spacious interiors. The effect of being in such a hall on a grand occasion is nothing short of fairytale magic. An example of a construction of miniature stage set at the Opéra Garnier in Paris.

In a single ticket to the Opéra Garnier, you can also visit its museum and gallery. On display are paintings, collections of books and several perfectly constructed miniature stage sets enclosed in glass casings. In l’Opéra Garnier, a corridor and library filled with several miniature stage sets on display.

No less stunning is the interior of the auditorium where the deep ruby red velvet seats arranged in a sumptuous curve invite you to into a world of grand luxe. The plush seats were also built on the theory that the colour red flattered women’s complexions. 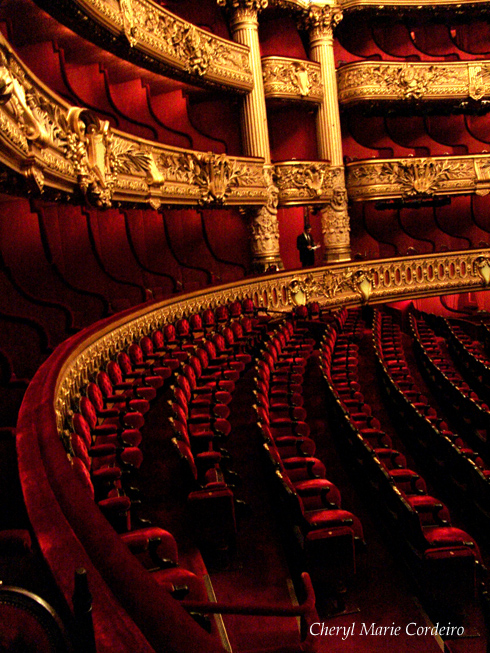 This 2,200-seat auditorium room is lined with gilded boxes.

Several boxes in the auditorium are usually left open for visitors. To get there, just head to the top of the grand staircase and look for the wooden doors that let you into the auditorium.

On the ceiling of the auditorium hangs a bronze and glass chandelier designed by Charles Garnier with 340 lights. A massive piece of art.

With a lake running under this Opéra house, its more than 300 types of marble interior and its impressive interior design, I think most would take up the invitation to escape with a story like The Phantom of the Opera, dramatically living and breathing its characters for a few hours, set within the marked splendour of these walls.

One thought on “The Opéra Garnier in Paris, France”

Stirred, not shaken, in Monte Carlo