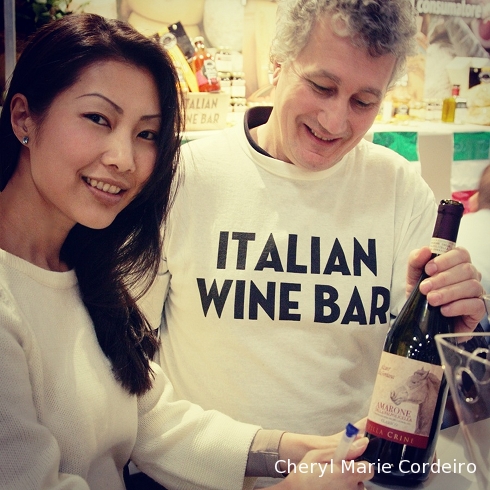 With Zdenka and Martino (pictured) Oliboni of Italian Wine Bar.
When I asked which Amarone they thought should I have for the evening, the bottle I had in hand was politely removed and replaced with this bottle of Villa Crine Amarone Classico 2008.
Text and Photo © JE Nilsson, CM Cordeiro 2013

Sunday 3 March was the last day of the Gothenburg Passion for Food Festival 2013. The winding down hours, or the final rush, depending on your disposition, found me at the Italian Wine Bar with Martino, his wife Zdenka and their colleagues. Trade fairs, as much as they are for marketing and doing business is for me a meeting point to catch up with old friends and make new ones. In these closing hours I had just one thing left on my wish list, a glass of Amarone.

Seeing that Zdenka and Martino were busy, I began browsing their assortment of red wines. But I didn’t have long to ponder my choice since as soon as they spotted me, various bottles were promptly brought forward and just as long lost friends, we picked up chatting from where we left off last year.

The Italian Wine Bar they represent is an Italian company they own jointly with the purpose of introducing a little piece of Italy to Sweden. They source wine, beer, grappa and various delicatessen (such as panforte from Antica Pasticceria Masoni) from their local friends and neighbours in Tuscany, just in-between Florence and Siena which is a pretty significant place in the regional history. In fact Eva and Gino Vettese live within viewing distance from San Gimignano, which I had the pleasure to visit just a few years ago. Their own olive oil is also sold via the Italian Wine Bar. It is fun to notice that what I was looking at today was specifically that kind of olive oil I was advocating already by then:

When it comes to olive oil, there are different qualities beyond “virgin” and “cold pressed” oils. What you want is something better than extra virgin olive oil in flavour. The oil to look out for is from those that hand pick their olives and have them pressed on a daily basis. Although this kind of quality olive oil is difficult to source

With their minuscule yearly harvest, it was no hard decision to pick up a few bottles at once.

Faced with an array of various Amarones I was happy for a more specific recommendation. Martino, promptly removed the bottle I was eyeing and instead suggested a Villa Crine 2008, while explaining that the Italian word “crine” referred to the horse’s mane. This Amarone, made by Venturini, has been around since 1883, and got more widely noted just about a decade after that. Their grapes are selected and hand picked between October to November each year and pressed in January to February. Historically the grapes were dried in the large barns of the villa, using mats that were traditionally used for the cultivating of silk worms. Today the process is mostly the same save that the original barns are replaced with special drying chambers to ensure quality.

With its vibrant deep ruby red hues that tends towards a deep garnet, Villa Crine Amarone Classico caught my interest thanks to its intense flavour with tones of violet, wild roses, black cherries, followed by notes of hazelnut and … cacao. Who would have thought of that?

Today, the winery is run by Giovanni Battista och Mara Venturini, where Villa Crine continues to win awards. In 2006 it won the award for best wine in the “Vini Classici Pedemonte” and in 2008, the award for best Recioto for “Palio del Recioto”.

It wasn’t only wines that we shared whilst we chatted. Olive oils, something that I have since a few years back fallen in love with as a product, was also an upbeat conversation starter with Eva Vettese who runs Residenza Cornino in Tuscany with her husband, Gino Vettese. More than anything, Eva’s enthusiasm for her olive oil produced from an exclusive set of just 300 olive trees in the garden of Residenza Cornino, is evident when she simply wishes to share her product with you! 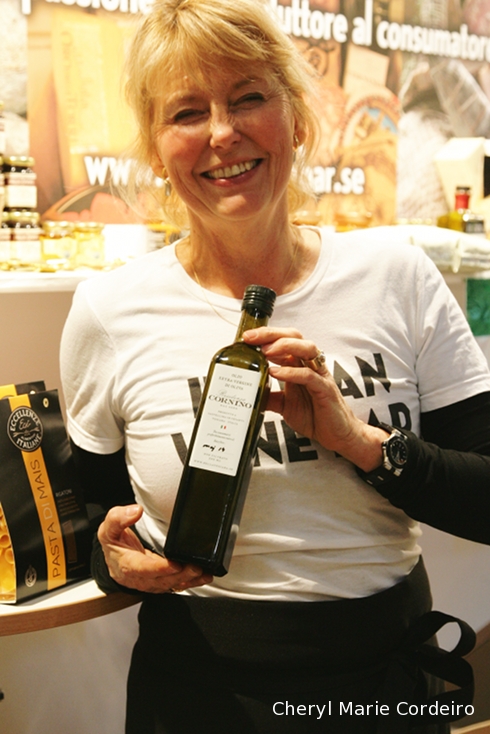 Eva Vettese, with a bottle of her own olive oil, produced from an exclusive grove of a mere 300 olive trees grown at Residenza Cornino nestled in the soft rolling hills of Tuscany.

An integration of work and pleasure seems to be a running theme at this gourmet fair.

Besides being her home and an olive grove, Residenza Cornino in the heart of the Chianti Classico district, is also happy to open its doors to small groups of people for conferences and events. Always open to new suggestions and collaboration with regards to visits to Residenza Cornino, Eva is enthusiastic too, about hosting larger groups whether for conferences, retreats, wine or olive oil tasting sessions. Her list of restaurants around the area where guests can visit is extensive.

Her recommendation would be for guests to not to miss out on trying a Tuscan delicateness basket with an exclusive selection of specialties such as salami, pecorino cheese, truffle honey and panforte, with an offering of a good organic Chianti Classico wine.

I could spend hours musing the various fineries of notes of olive oils, contemplating which breads and cheeses each sampling complemented best. The extra virgin olive oil from her gardens, processed naturally without any added chemicals, is pure heaven to the senses! It brings you immediately to the warm sunshine drenched Tuscan fields of Italy with its undulating hills, in its finest weather and richest givings you could harvest from its soils. Eva shares that this oil is a work of love that can’t really be motivated from a business standpoint. With their extremely careful and labour intensive production, one entire tree gives only one litre of oil, but, what divine olive oil!

Kajsa Smith is also presenting her wines and her business Cajsas Cave, at the Passion for Food Festival. For ten years she has now been working at Mas Bouchy, in the romantic French village of Dompierre sur Veyle. Her story of finding herself right at home in France would perchance lend inspiration to anyone who feels that the Swedish winters are just too grey and the summers, just too rainy. 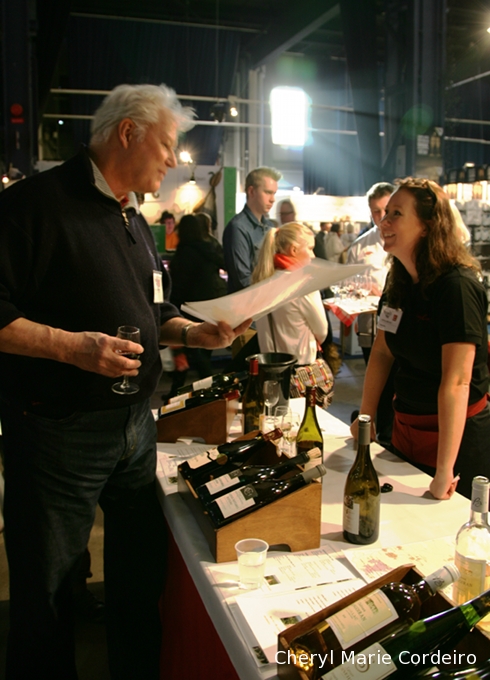 At Cajsas Cave, for a selection of French wines.

Cajsas Cave hosts numerous visitors and guests on an annual basis for wine tasting and traveling to the various surrounding vineyards. Currently, the basement to Cajsas Cave contains wines from all major districts in France and the selection is done after the taste and experience of what guests have enjoyed. French guests would be invited to enjoy Swedish specialties and guests from Sweden, would be equally hospitably invited to enjoy the local produces of the French countryside.

Magnus Holmgren of Magnum Wine is an interesting wine merchant of sorts. Specializing on wines from Bordeaux they also stock wines from Rhône and Provence. Magnus participates in the prime wine trade and buys many of the world famous wines directly from the highest ranked castles. He also trades in wines of older vintages in smaller quantities which he can then offer his clients. One of his favourite things to do that proves his metier in knowledge of Bordeaux wines, also demonstrated by the wines offered at the fair, is to look for ‘finds’, which are really good wines from smaller and less established estates that could be offered at modest prices. Surely I could mention a few examples here that Magnus shared with me, but why take the fun out of finding them yourself? 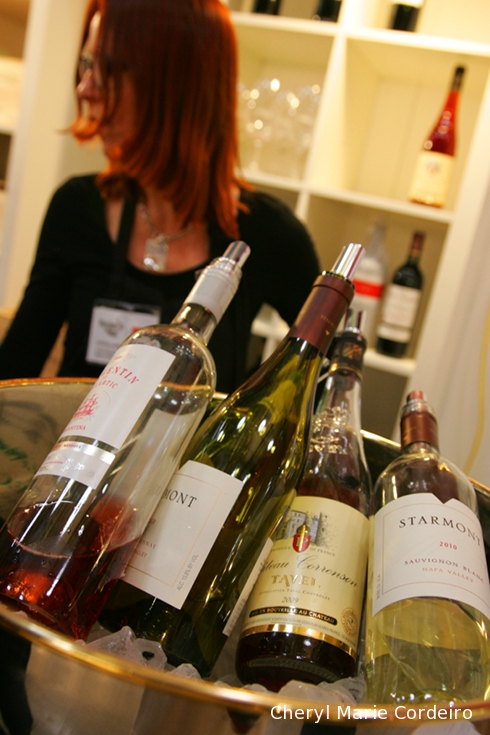 White wines on the chill from Magnum Wine, owned by Magnus and Linda (pictured in the background) Holmgren. 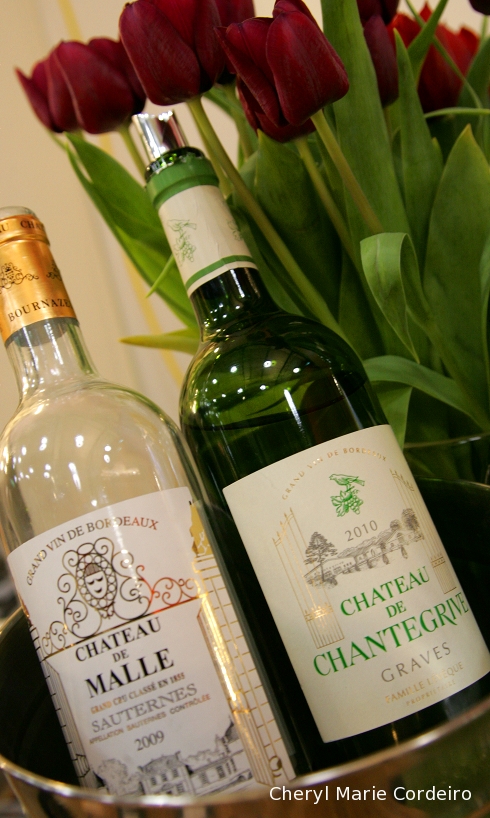 A selection of Bordeaux blancs that Linda loved and recommended. Not so much in fashion as the red Bordeaux, as much due to a lack of awareness of the product as with the production capacities, these white Bordeaux have a sauvignon blanc character with citrus and light floral notes (ref. The Paler Shade of Bordeaux, NY Times. Feb 11, 2011). 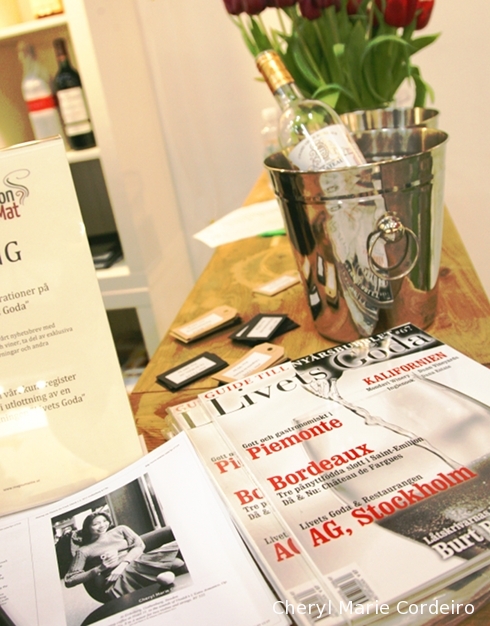 Rather than approach auction houses or wait for wine auctions in order to acquire good quality vintage wines, Magnus and Linda also try to make accessible these fine wines from Bordeaux, such as bringing in boxes of Chateau Haut-Chaigneau 1995 from Lalande de Pomerol.

Back at that glass of Amarone

The round of mingling and well wishes to friends at this food festival found me right back at the Italian Wine Bar. 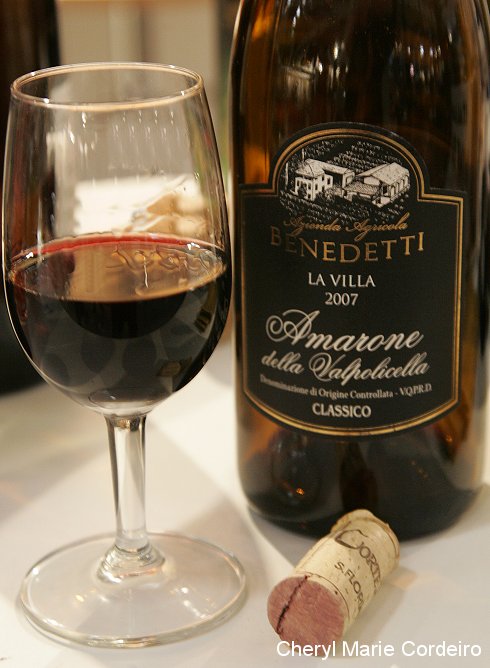 Rounding off this year’s Passion for Food Festival together with Martino and his wife, Zdenka Oliboni at the Italian Wine Bar, with a glass of Benedetti La Villa, Amarone Classico 2007. This classic Amarone comes from Negrar, in the middle of the Valpolicella area. A powerful wine, full bodied and with a fruity handful of raisins. Splendid.

The closing hours of this fair was all of a happy Walden moment for me. The dynamics of this gourmet fair, the network of individuals who share a like-minded philosophy towards producing items of utmost quality with passion, and the collective symbiosis of businesses run evident at this white and gold soirée.

Even as the party ends and each now go their own way, you know that these individuals will continue their efforts with a shared motivation – to bring authentic high quality produce to a market that is far too often times filled with overly processed products with more fillers than actual food. And to do so passionately.

To the wonderful people I had the opportunity of meeting at this year’s fair, Thank You for a warmth filled ball of fun, laughter and gorgeous gem-coloured wines! I look forward to meeting with you again in the near future, wherever you may be in the world.