Homemade egg noodles / pasta in under an hour 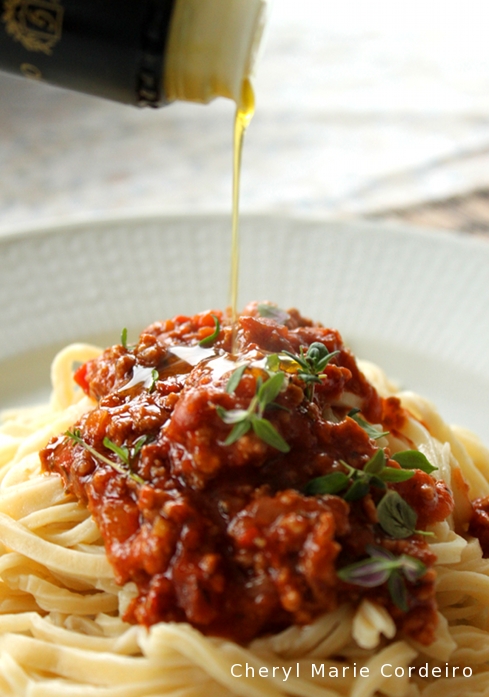 A fork full of this homemade egg noodles / pasta brought an instant flash of a Madeleine moment of sorts where I was reminded of my first encounters with egg noodles as a child of about age six.

It would be one of my first days in school in Primary One at CHIJ Katong in Singapore, dressed in freshly pressed blue pinafore over a starched collar white blouse. I was new to the routine of going to class, making new friends and having to navigate recess time buying food at the school canteen on my own. It was perhaps the second day of school that I found myself drawn to one of the more crowded canteen stalls that sold fishball noodles that cost all of Singapore $0.40 cents during the early 1980s. I realize today that the bowl that was filled half with noodles and two fishballs, was not large though it seemed at the time, very large in my tiny hands.

I’ve always found myself to be a slow learner and remember that at age six, while some other girls had mastered the art of eating with chopsticks, I sat for most part of the recess time, struggling to put strands of noodles onto the soup spoon for a neat consumption. It took time and I was happy that on some days, my father’s father was around to keep me company, sometimes laughing at my actions, most times just sitting and watching in amusement. 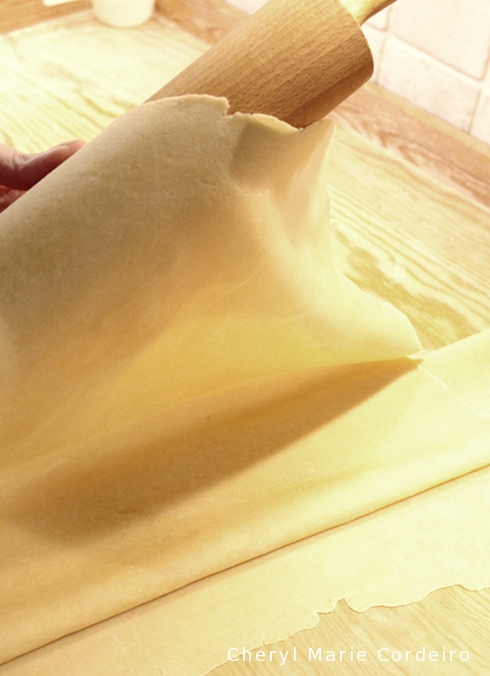 There are several recipes to choose from when making pasta, the most important consideration is that you try to use extremely fine milled flour, which is why Italian Dallari or 00 flour is recommended. The protein content of this flour should be around 12.5%. In absence of a finely milled flour, you could use all purpose flour, which is what I did for this batch of fresh egg pasta.

The general idea is to use 1 egg to 100g flour and a generous pinch of salt. Nothing else is needed for a basic pasta recipe.

Other variations include adding milk, water, olive oil, spinach (for green pasta) or squid ink (for black pasta) for your favourite variations of pasta. 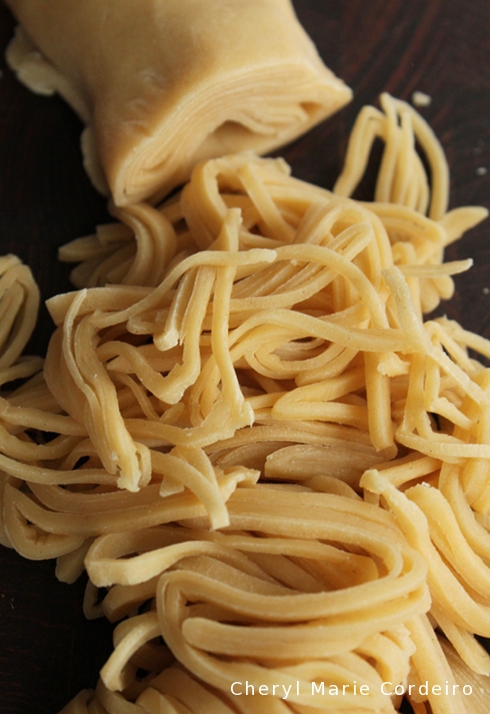 I don’t usually make fresh pasta in large batches, perhaps with only 300g of flour each time, which makes just about 2 to 3 serving portions. And it is for this reason I find that working by hand is easiest, without any need for blenders or pasta machines. A rolling pin comes in handy and then a standard kitchen knife for cutting the thinly rolled out pasta is useful too. 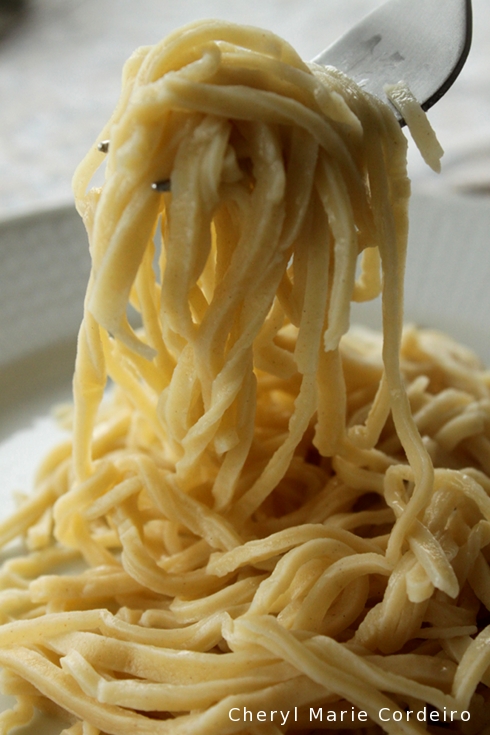 Just out of the pot in under three minutes of cooking time.

The entire project of making fresh egg pasta is quick and hassle free. It takes several minutes to get the egg incorporated into the flour to form a dough. You’ll have to knead some to get the gluten going in the dough but otherwise, most of the work is done by letting the dough sit and rest for about 30 minutes before rolling it out to cut. Cooking time is just under three minutes when boiling and thereafter, serve with whatever recipe you have thought of for the meal, from carbonara to bolognese and vongole.

In this case, what I found complemented the fresh pasta and gave the entire dish its aromatic twist with the meat sauce, was the lightly crushed leaves of fresh thyme, sprinkled on top of the dish.

Apart from the Madeleine moment this dish invoked, I find homemade pasta to be a simple and elegant luxury to an evening of unwinding. For a notch more of the unhurried, add a glass of your favourite wine.