In The New Eurasian, Singapore, Oct-Dec 2009 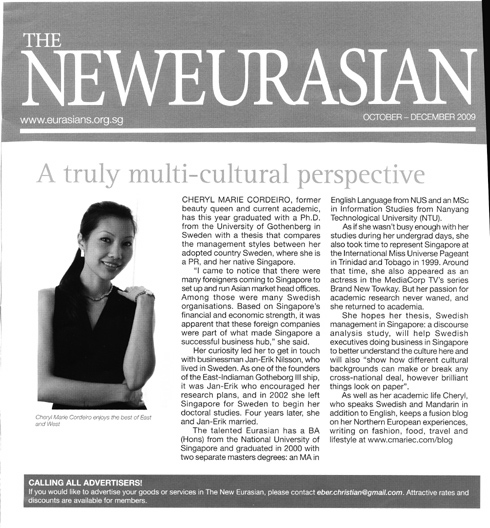 In The New Eurasian, October to December 2009. 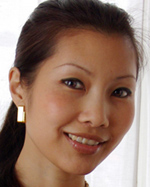 Cheryl Marie Cordeiro, former beauty queen, and current academic – has this year graduated with a PhD from the University of Gothenberg in Sweden with a thesis that compares the management styles between her adopted country, Sweden, where she is a PR, and her native Singapore.

“I came to notice that there were many foreigners coming to Singapore to set up and run Asian market head offices. Among those were many Swedish organisations. Based on Singapore’s financial and economic strength, it was apparent that these foreign companies were part of what made Singapore a successful business hub,” she said.

Her curiosity led her to get in touch with businessman Jan-Erik Nilsson, who lived in Sweden. As one of the founders of the East-Indiaman Gotheborg III ship project, it was Jan-Erik who encouraged her research plans. In 2002, she left Singapore for Sweden to begin her doctoral studies. Four years later, she and Jan-Erik married.

The talented Eurasian has a BA (Hons) from the National University of Singapore and graduated in 2000 with two separate masters degrees: an MA in English Language from NUS and an MSc in Information Studies from Nanyang Technological University (NTU).

As if she wasn’t busy enough with her studies during her undergrad days, she also took time to represent Singapore at the International Miss Universe Pageant in Trinidad and Tobago in 1999. Around that time, she also appeared as an actress in the MediaCorp TV’s series Brand New Towkay. But her passion for academic research never waned, and she returned to academia.

She hopes her thesis Swedish management in Singapore: a discourse analysis study will help Swedish executives doing business in Singapore to better understand the culture here and will also “show how different cultural backgrounds can make or break any cross-national deal, however brilliant things look on paper”.

As well as her academic life Cheryl, who speaks Swedish and Mandarin in addition to English, keeps a fusion blog on her Northern European experiences, writing on fashion, food, travel and lifestyle.

Thank you, to the Eurasian Association of Singapore, for a wonderful write-up and an update on Eurasians around the world. The October to December 2009 issue of The New Eurasian is out, and personally, I’m already looking forward to the New Year’s Eve Maquerade Soiree! For more information on October to December’s upcoming events, please visit the EA’s website.

One thought on “In The New Eurasian, Singapore, Oct-Dec 2009”

Reflections on being Miss Singapore Universe 1999