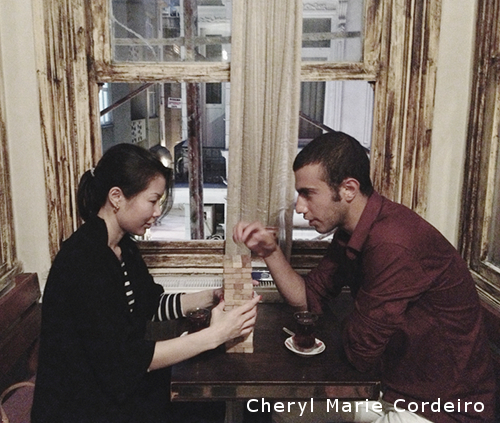 İstiklal Cad is a lively street located in one of the most modern areas of Istanbul. This evening, it was a matter of whether it was crowded, or very crowded. Weekends are almost impossible to navigate with so many people wanting to take in the sights and sounds of one of the city’s most elegant walkways, filled with shops, cafés, bars and clubs from old to new.

I found myself in the company of a group of engineering students from the ERASMUS program of Istanbul University. Being an international group, we communicated across languages with some hand gestures. They navigated the crowded street in determined steps, as easy as fish in water that knew the streams of movement well. I had no clue where I was headed, except that it was according to them, a popular university student hang-out with cheap food, cheap beer and good music, all elements tailored for their purposes. I tried to keep up with the stream best I could.

But there was no time for answer because I was immediately thereafter swept into a narrow blue wooden door that looked in desperate need of repair, up a winding staircase to land first at the third floor of this narrow shophouse, then back to the second floor where more students seemed to have nestled themselves. 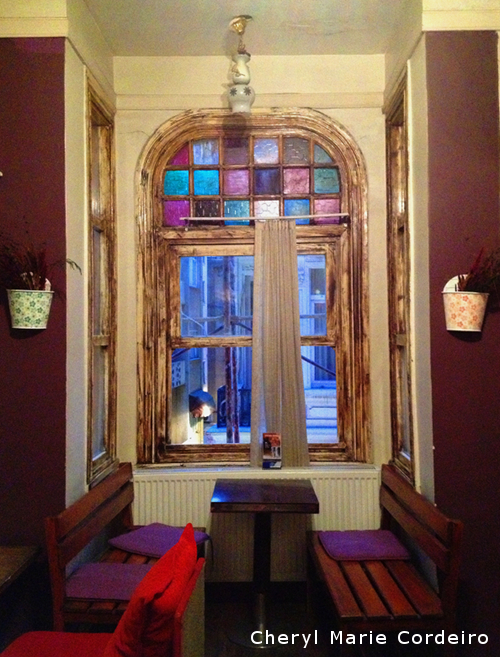 The floors were lit dimly warm that corresponded with the reds and plums of selection of eclectic furniture, everything from cabinets from the early 1900s to modern kitsch. On the outside were restoration works going on, but it was difficult to tell if the same was not happening on the inside of café and bar, Uçanev, with painted window panes looking as if in midst refurbishment. A design feature that I took reflected the state of minds of the patrons of the place, being a constantly evolving process of thoughts and ideas themselves, individuals in mid-transformation. It was charmingly rustic and grundge at the same time. 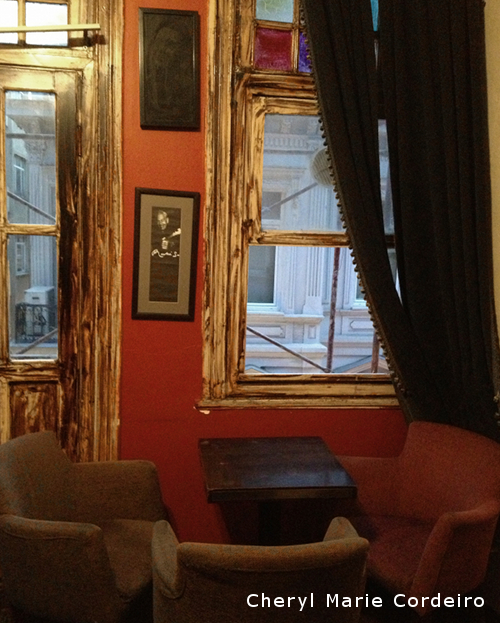 A corner in terracotta.

The atmosphere and scene at Uçanev brought me back immediately to my days when I was myself, an undergraduate at the National University of Singapore (NUS). If these were engineering undergrads, they didn’t quite look it. They rather reminded me more of the Arts and Social Sciences undergrads in NUS, brilliant minds that were generally relaxed in attitude towards the surrounding, though determined to somehow make a change in society. Their political activism marked by the many political ideologies scribbled on sticky notes pasted along the walls of this café.

After initial greetings of more university fellows, they pulled out – Jenga – the game they wanted to know if I was familiar with.

“Oh! I thought you were asking about playing billiard, because that’s what we played a lot of when back in NUS.” 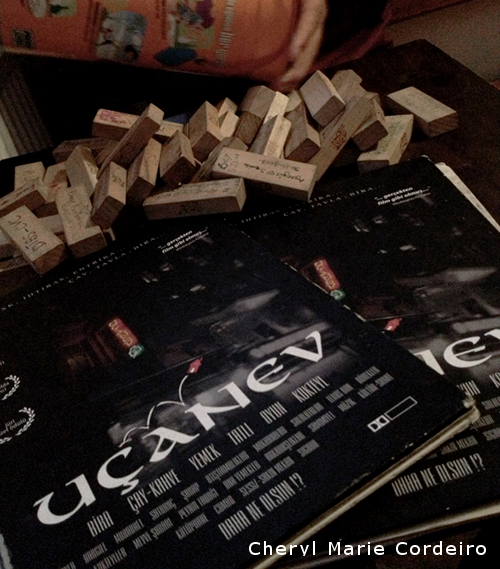 “You can discover more about a person in an hour of play than in a year of conversation.”~ Plato

I found it interesting how much you can discover about people you have never before met, whilst playing seemingly innocuous games with each other in a team. Not farther than the first round of Jenga had I realized that, seeing I was unfamiliar with the ground rules of the game, that they had relaxed the very idea of rules, what can or cannot be done, what should or should not be done.

The second observation was that there was no particular winner or loser in playing Jenga with this group, no tokens to be counted but rather a team effort to keep the structure standing for as long as possible. It was a collaborative perspective on the game rather than one of competition. The words, “help me” was often used too, as cutting across language barriers to steer the general direction of the efforts. 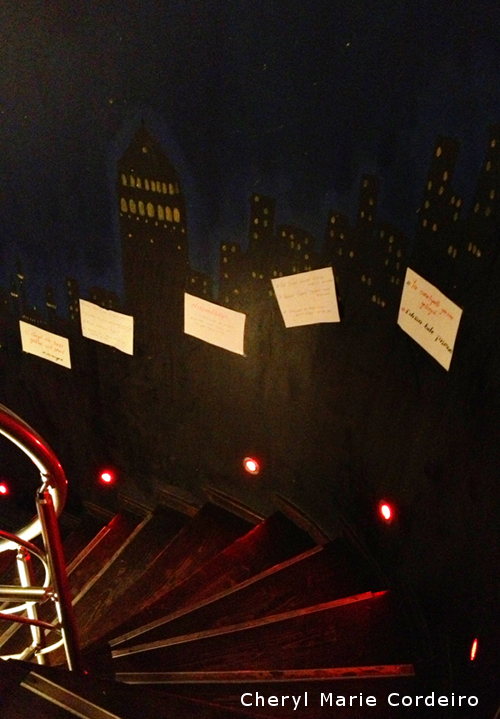 Painted city scapes along the walls of the stairwell.

Topics moved from one to another, encompassing current Turkish politics, their general views on state governance to what was on their minds in the nearest upcoming future university terms. I laughed when they told me that Taksim, where I am currently housed, is one of the most expensive areas in Istanbul and should I ever want to get to know student living, with the cheapest food, cheapest hang-outs and cheapest beers, to give them a call and they would show me around some. They recommended that I visit the Sunday open air markets where fruits and vegetables, already sold at good prices, can be further bargained. The best Turkish coffee is also found, outside of Taksim, preferably in the neighbourhood of Cihangir. 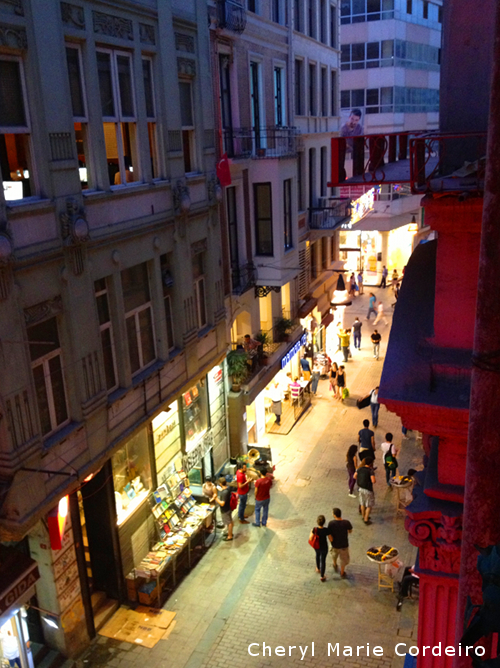 Peering out from the second floor window. 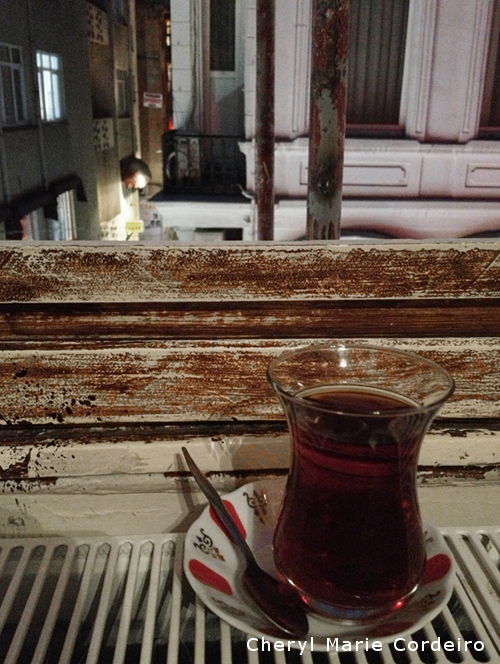 It is often the unexpected in life that brings the most serendipitous of experiences. Spending an evening out with a group of engineering students with several rounds of Jenga was one such event.