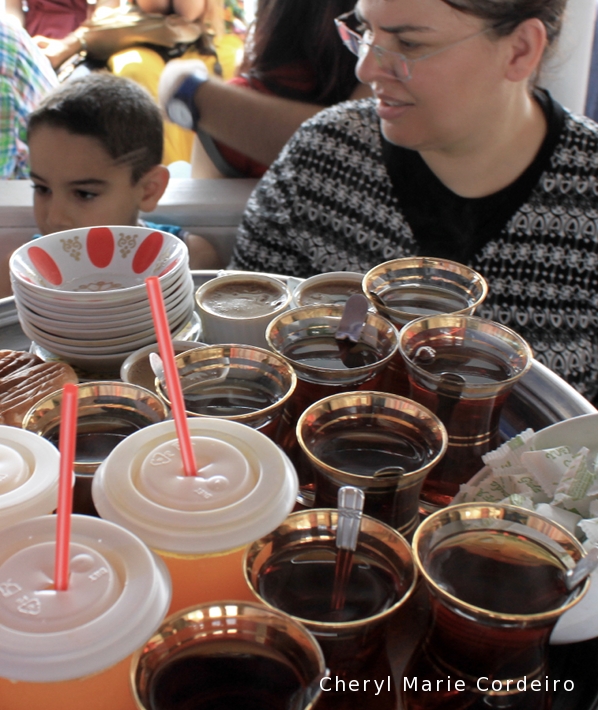 On the Bosphorus ferry carrying you from Europe to Asia, tea, coffee and orange juice
are offered as refreshments amongst hundreds of passengers.
Text & Photo © JE Nilsson, CM Cordeiro 2013

Whether seated on the ferry along the Bosphorus, in a narrow cobblestone paved side passage coffee stall or just standing in a street corner with a cup in hand, the drinking of hot beverages makes up part of the vibrant daily fabric and colourful streetfood lifestyle of old Istanbul. 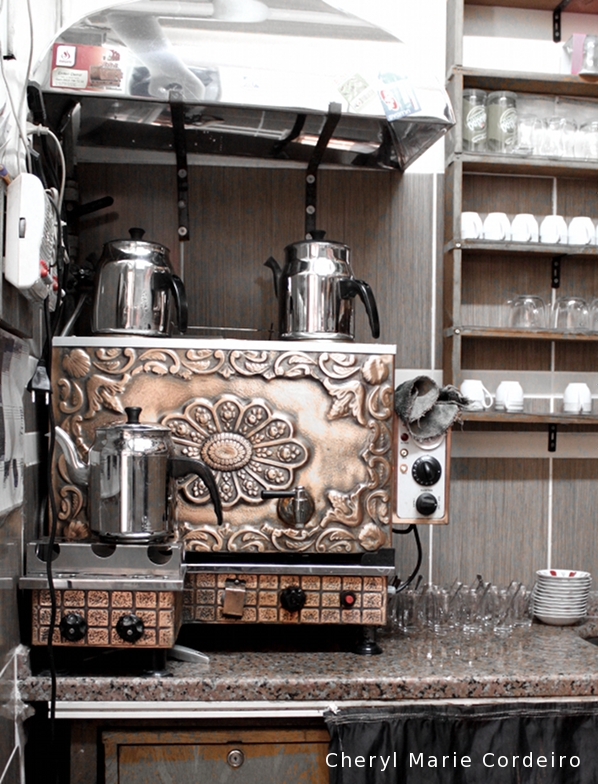 One of the more beautiful coffee machines spotted in Istanbul, that sits along Fincancilar Çikmazi.

As a sign of hospitality, I was occasionally offered a deep Spessartine coloured cup of hot tea, served in a small tulip shaped glass – the glass being “the shape of a beautiful woman”. And when not in shops per se, trawling the markets for exquisite finds would also mean that you are likely to stop and rest along the way.

In the general neighbourhood of Fatih, sits one such place of respite. It is a small coffeeshop that lays almost hidden, located in a side alley under the worn tarpaulins of Fincancilar Çikmazi at Mercan Mahallesi. 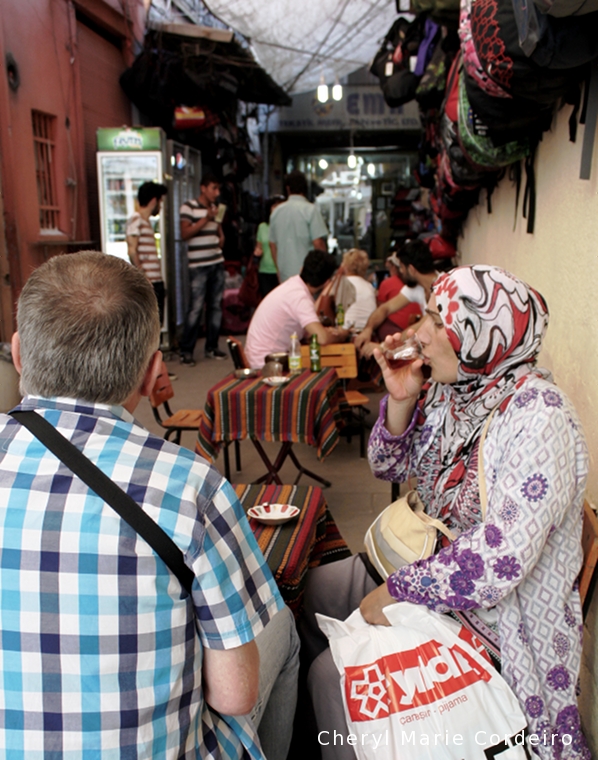 It was the colourful woven tablecloths that first drew my eyes to this place, laid out attractive and neat over low wooden tables and chairs. This side lane was sloping and sliding in two different directions at the same time as it was climbing the side of one of Istanbul’s seven hills, and that small cups of coffee and tea could sit on these tables without much spill over the rims of the cups kept locked my attention for some time before I decided to see if my own ordered beverages would be likewise well behaved?

I settled onto one of the outermost low tables, towards the entrance of the main street when the man of the shop approached for my order. He spoke no English and I only knew the word çay despite perhaps I had wanted to inquire after what different types of tea he had available. But çay sufficed and I was brought a rich garnet cup of tea, which I so enjoyed even looking at. 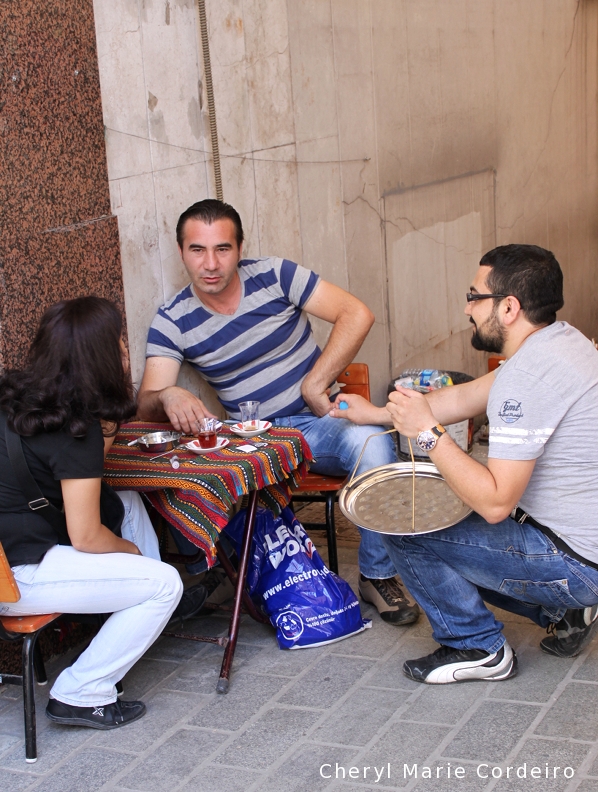 Turkish coffee shops are social nodal points for friendly conversation over cups of coffee and çay.

Sitting at the table, it was not long before I had the opportunity to observe a little bit of the Turkish coffee / tea drinking culture as a world in microcosm happening in this side lane alone – a group of friends drop in on the man at the stall, they sit, exchange news over two cups of tea and then leave; two young men over Turkish coffee, sit huddled with heads over their iPhones, browsing Facebook; an older couple, in from the streets with bags filled with textiles bought at wholesale prices and … a little girl of age 7 or 8, waves and smiles at me whilst her mother and aunt, both dressed in hijab, orders for her and her cousin, cups of tea.

This little girl carries on her shoulders, a school backpack. She beams every time I look in her direction that makes me wonder about the universality of human connection and emotions, across languages, across cultures. I look at her and then at her mother and her aunt, I smile back and wonder what values she would carry and contribute to a country that is now in explicit transition and transformation.

The coffee man and the Turkish national drink debate 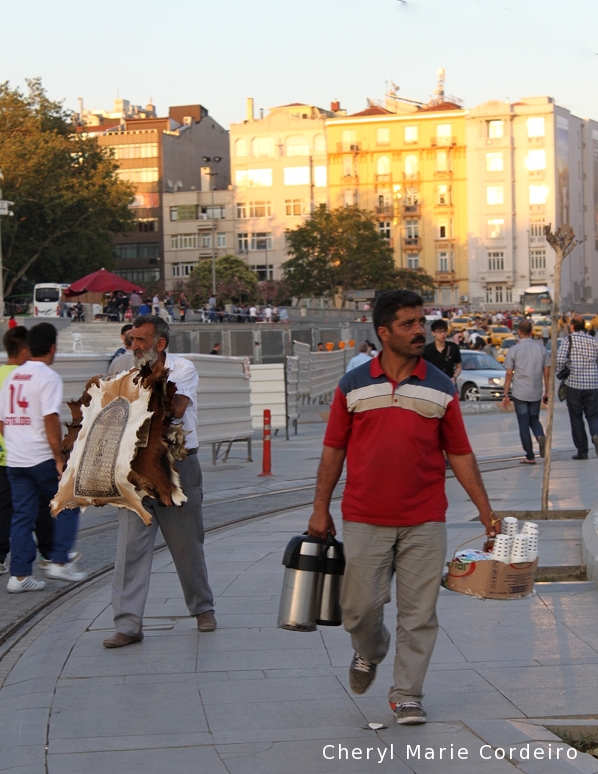 The coffee man, that also sold tea, on the streets of Istanbul.

Turkey’s Prime Minister Recep Tayyip Erdogan raised a few eyebrows on 27 April 2013, when he declared that the country’s national drink should be Ayran, the salty yoghurt drink that so often accompanies Turkish food rather than rakı, an unsweetened, anise-flavored hard alcoholic arrack.

In a country that in the past few months has experienced some civil turmoil, that extends debate into the domestic affairs of the people, Turkey’s coffee man who perpetuates by trade, the country’s tea and coffee drinking culture, has in today’s socio-cultural context of Turkey, a rather different significance. He is not as socio-politically innocuous as even he might hope, trading in hot beverages if only because of the country’s heritage and history. 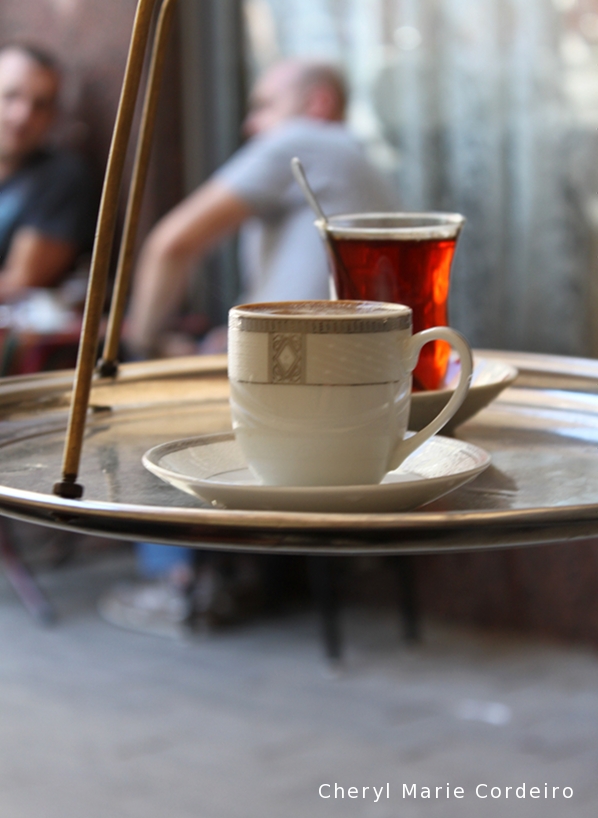 On a steady tray through the streets to you, at your convenience.

One could see the suggestion of Ayran as national drink as a way of conforming to Islamic aspects of non alcoholic regulations but in reality Muslim and secular society have always lived side by side in Turkey.

In more recent times, the traditional Turkish drinking culture has been influenced by the growing availability of a number of hot beverages such as tea, instant coffee, and other modern styles of drinks readily available at the local Starbucks or off the shelves in any convenience food store.

A little further back, modern Turkish history began with Mustafa Kemal Atatürk (1881-1938) who was a great lover of rakı, that until today would be the essential liquid center point for any Istanbul night out.

Going further back than the time of Atatürk, the Turkish Meyhanes was inherited from the Byzantine Empire and seaside cities where merchants would stop and spend their time and money on drinking. During the period of the Ottoman Empire the number of Meyhane’s increased considerably. While some sultans prohibited alcohol at various times and the Muslim population complied with the religious rules, no one bothered much about what the minority population did.

However, the Turkish yoghurt culture, if you excuse the unintentional pun, actually goes back to the very roots of the nomadic Ottoman Turks. The use of yoghurt by the nomads is recorded in books written in the 11th century and for the region at large, goes back to the days of Abraham whose long life was explained by his eating of yoghurt.

It is even thought that early yoghurts could have been spontaneously fermented by wild bacteria in goatskin bags, similar to those you can find even today in the food bazaars containing cheese.

In synthesis of this brief, broad sweep of the country’s history and what it drinks, one could postulate that an explicit designating of Ayran as Turkey’s national drink, a beverage that goes back farther than the time of the Romans or the Ottoman Empire itself to situate modern Turkey to the roots of the nomadic Ottoman Turks could perhaps be argued as a strong socio-cultural reigning in of sorts of Turkey’s people.

In a country that is fast transforming, as one where East meets West not just in geographic boundaries but in values and beliefs, this seemingly bland suggestion of a yoghurt drink as national entity could well give reason to further dissonance between parts of the country touched by globalization, to those that remain untouched by global processes. 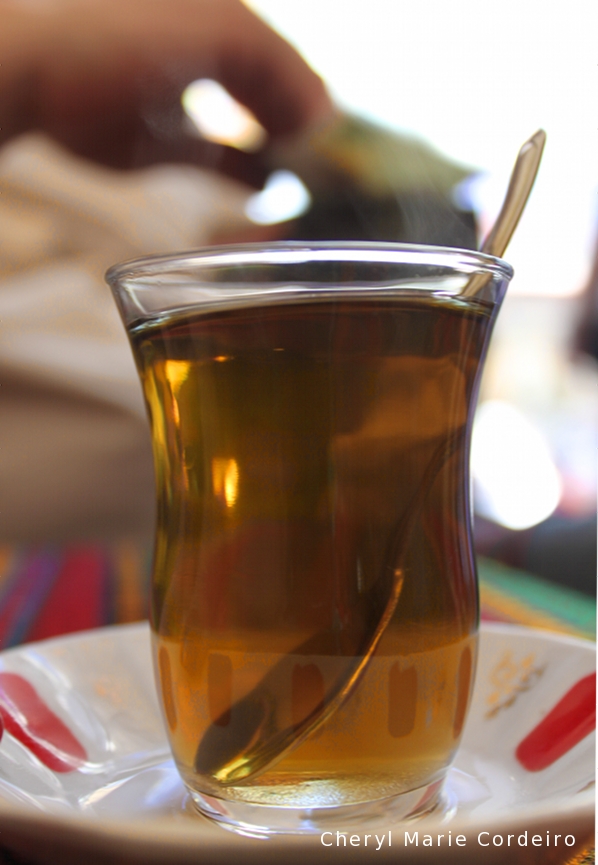 As one who lacks depth of insight into the true histories of Turkey and who only observe from the sidelines, the socio-political happenings of the country and whose lenses are coloured Scandinavian, I think to discuss introducing anything else than a small cup of black strong Turkish coffee with just the right amount of foam, served with a glass of water on the side could well prove a futile exercise.

Personally, I would prefer on any day out in Istanbul, a cup of non-instant Turkish apple tea, “served in a glass shaped like a beautiful woman”. In which case, it will come to me in an equally alluring hue of warm velvet Hessonite, in company to any amiable conversation at the table.