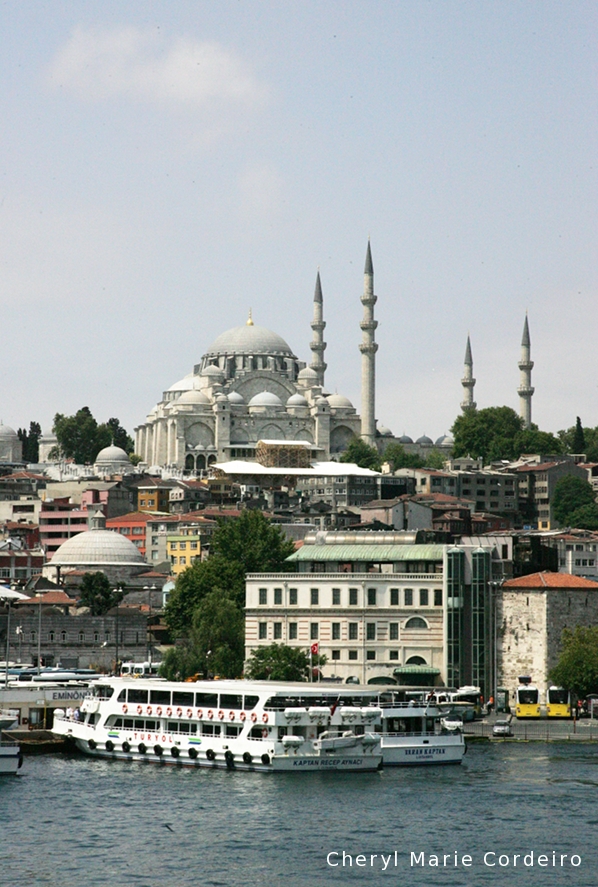 The Süleymaniye Mosque from 1550 as seen from the Galata bridge
across the water of the Golden Horn. To the left, a corner of the Egyptian Spice market
Text & Photo © JE Nilsson, CM Cordeiro, Istanbul 2013

Crossing the Galata bridge from Pera towards the Old City part of Istanbul, the Süleymaniye Mosque dominates the skyline. It dates to the 1550s and the era of the Ottoman Empire.

As with other imperial mosques in Istanbul, the Süleymaniye Mosque was designed as a complex with adjacent structures to service both religious and practical needs. The original complex consisted of the mosque itself, a hospital, primary school, public baths, a Caravanserai, four Qur’an (ethics and moral) schools, a religious (hadith) school, a medical college, and a public kitchen which served food to the poor.

For anyone else, a far better idea is to take the tram uphill to at least the Çemberlitaş and then taking your time and slowly filter your way through the Old Town, all the way back down to the Egyptian Spice market.

You can do this over and over again, finding favourite spots, making friends, eating and having coffee along the way, finding the best prices on your favourite things, and discovering new things every time.

Of all the winding streets that span the area in and around the Grand Bazaar down to the ‘Egyptian’ Spice Market, one of my first steps into these streets landed me right in the middle of the jewellery area. Still one of the largest gold markets in the world.

I take my time, peering through every window for cut of stone, design of piece, even how they laid out their pieces for window display.

– Today, you are very lucky Madam.

I hesitate to tear my gaze from one of the largest cabochon cut emeralds I’ve seen thus far. Set in crowning centrics of cabochon cut rubies, the large ring that looked to be a good sized pendant too, could easily fit onto any sceptre if there were any more practical uses of one today. I glance briefly in the man of the shop’s direction and quipped:

– Yes, because all of these are for sale!

He lets out a rolling laughter. I smile and said:

– Ah. But do you have something that is not for sale? Because it is those that I prefer to eventually call my own.

Above the noises of the market street, I met his gaze. My question was a sincere one. And for a few seconds this could have been any time, during the last 500 years, right here. 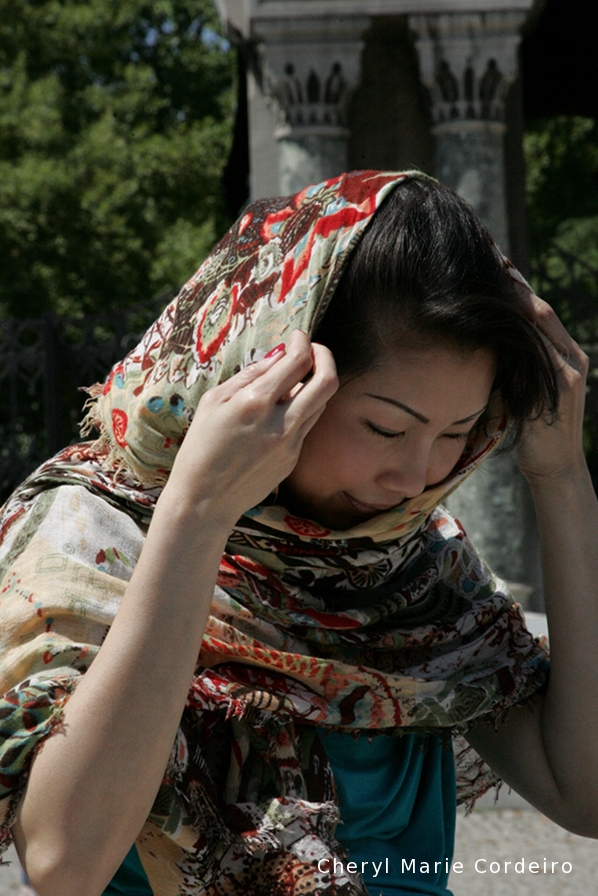 Besides the cultural aspect, a shawl makes perfect sense under the merciless sun.

Straddling the Bosphorus at the meeting point of three continents, Istanbul or Constantinople as it was formerly known, is as old as civilization itself. It had always been a key location for trade literally between East and West. Its land, highly prized for its centrality, status and symbol, has been for thousands of years, a site where political struggles for power and fortunes were fought.

Walking along the market streets, I could not help but feel the city reverberating Greece and Rome, despite its conquest of the 1400s.

Constantinople was famed for its massive defenses

Even when the Roman Emperor Constantin arrived here in the forth century and made it the capital of the Eastern Roman (Byzantine) Empire, they were stepping on a thousand years old ruins from the ancient Greek Byzantion era, that in its turn was built here on the ruins of previous cultures.

The old Istanbul was built on seven hills and was surrounded by one sea wall along the sea front and two walls, 2 km apart, covering the land to the west of the city. With its unique location surrounded by water in three directions, this hilly peninsula lent itself to be turned into a near impregnable fortress by the Romans. To the north it had the waters of the Golden Horn, to the South, the Sea of Marmara and to the east, the Bosporous, thus presenting a fortress enclosing magnificent palaces, domes and towers.

Although besieged on numerous occasions this the Christian capital of the Eastern Roman Empire remained impregnable for 900 years only to be taken and thoroughly plundered in 1204 by the army of the Fourth Crusade, sixty years later in 1261 by Michael VIII Palaiologos and finally falling to the Ottoman Sultan Mehmed II in the historic battle of 1453, to become the most glorious capital of the Muslim world that the crusaders had sat out to fight in the first place.

The city itself remained and prospered as the Muslim capital in the Ottoman period. 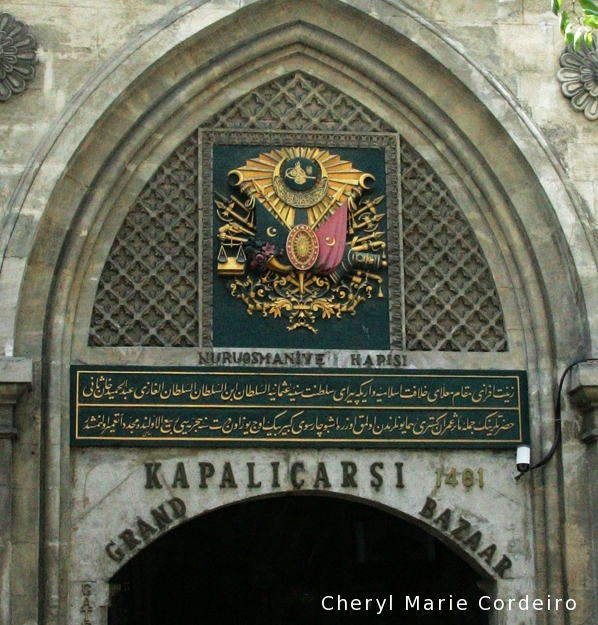 Most historic sites are located in the old part of Istanbul, on the small peninsula surrounded by the waters of the Golden Horn, The Bosporus and the Lake Marmara. On the outermost tip is the old Palace, the Topkapi Saray and close to this, was built the Grand Bazaar.

Largest and wealthiest city in Europe

This being the bridging point between three continents, a center for power and trade, the luxury of the Sultan of the Ottoman Empire could display stunned the western powers that eventually visited this city. In the 12th century, the city was the largest and wealthiest city in Europe.

What meets our eyes today are layers upon layers of various world dominating cultures. Nobody in the whole world today, are unaffected of what has went down here throughout history.

Most of the larger brush strokes were painted in self glorification by the Ottomans, that made Istanbul their own from the 1450s and onwards.

Later, admittedly, some remnants of French colonialist activities in the 19th century can also be seen, adding to the scent of romance which we enjoy today as visitors.

As a modern visitor, we walk over the grounds of the past caravanserais, and we can still buy very much the same produces that made this trade metropolis famous in the olden days. Silk, spices, and fragrant oils. And as of later days, candy. Slaves that constituted a significant part of the business, are mostly outlawed today.

Christianity had spread throughout Europe, Africa, and the Middle East in Late Antiquity, but by the early 8th century Christian rule had become limited to Europe and Anatolia after the Muslim conquests. Constantinople had remained a safe haven for historic documents from the early Greek civilization and early Christianity and their libraries contained numerous artistic and literary treasures, before it was sacked by the crusaders in 1204 and the muslim Ottomans 1453. 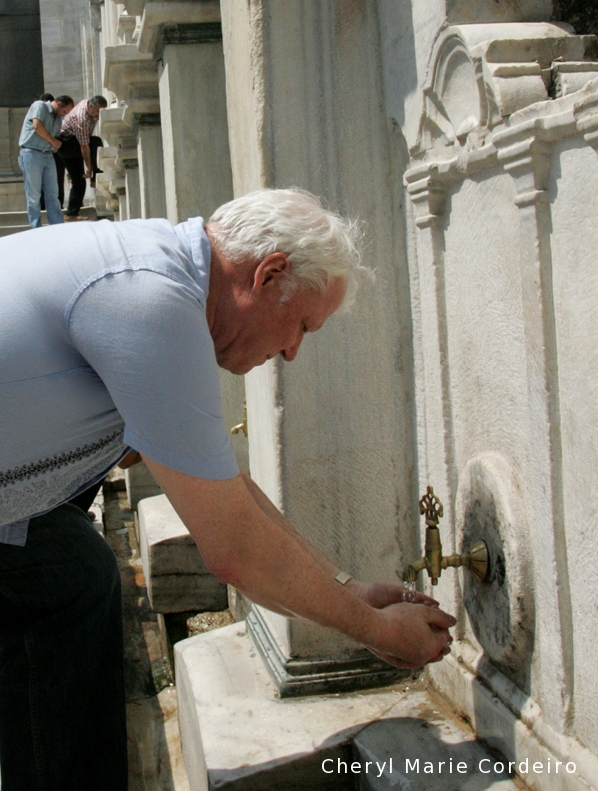 Water fountains are available outside of the bazaar, popular for ritual foot cleansing and a blessing for anyone feeling warm. 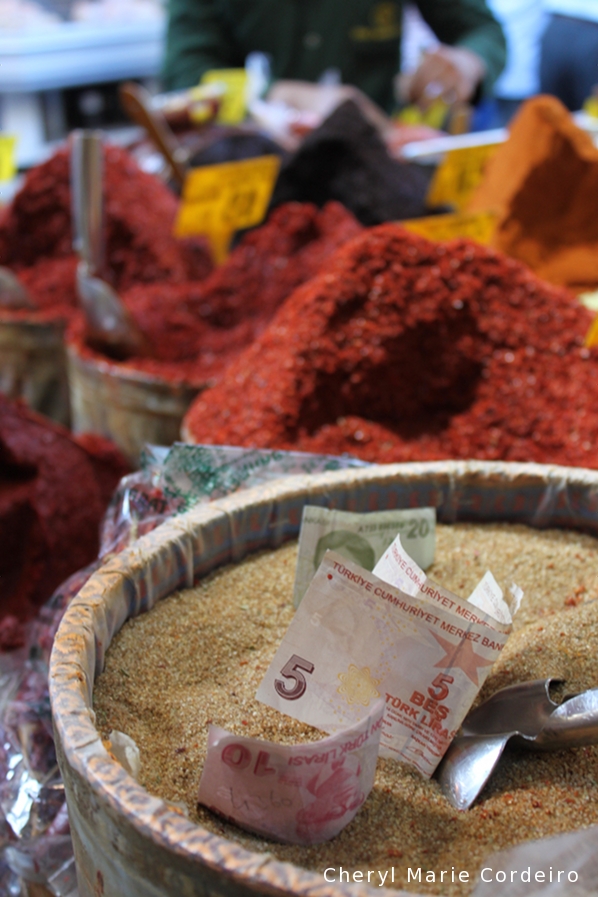 Some money for luck. Hopefully brother seeking brother, it will attract more. If you ask me, it seemed to work. 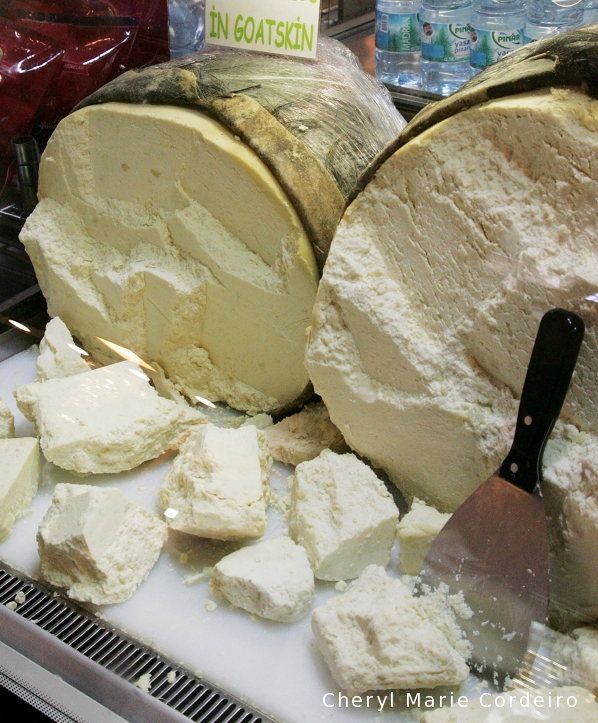 One of the earliest way to make yogurt appears to have been by storing milk in goat skin bags. Here cheese, was sold in such, very likely due to a long tradition. 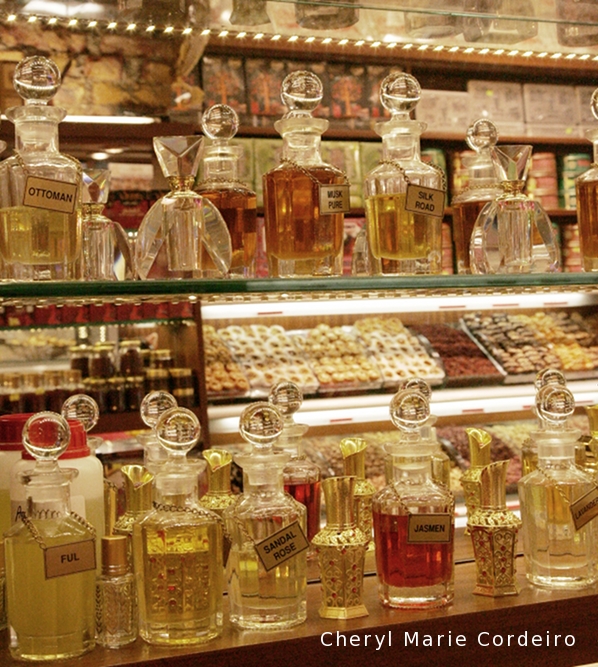 Scented oils. This is actually quite interesting. Besides some sellers being so generous that your senses could get numbed for the whole day, some of these oils are quite good. Go easy on the expensive drops and shop around some. Prices vary and are less the further out from the center of the Bazaar you get. 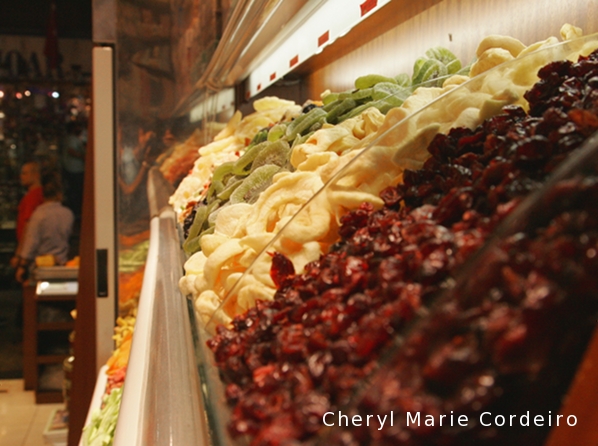 Dried fruits, as with nuts, leave them overnight to let uninvited guests bugger out of it. Otherwise excellent. I bought lots. Most stores can vacuum pack anything for you and it travels well. 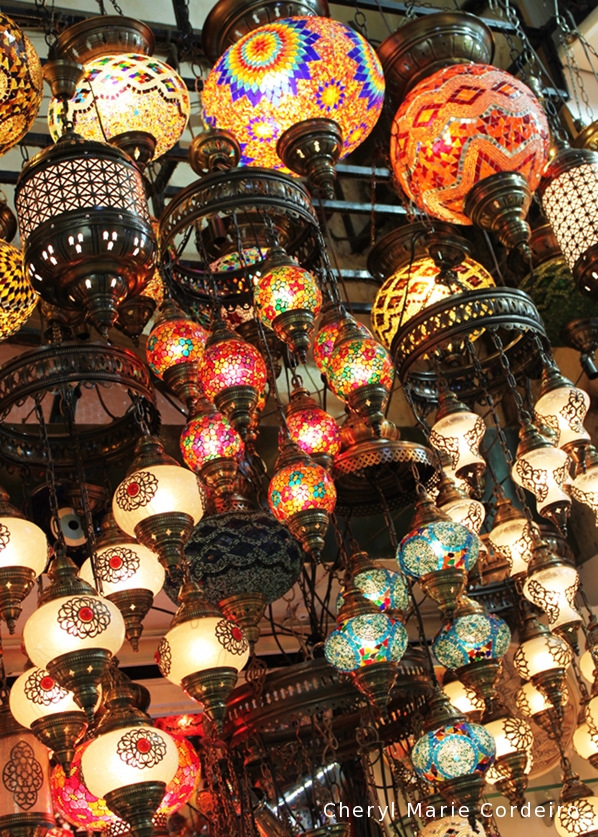 As colorful as interesting are the shops selling coloured Turkish and Moroccan-style hanging lamps. Genuinely nice cafés for locals and occasional tourists alike can be found on the small and narrow alleys in the old city. 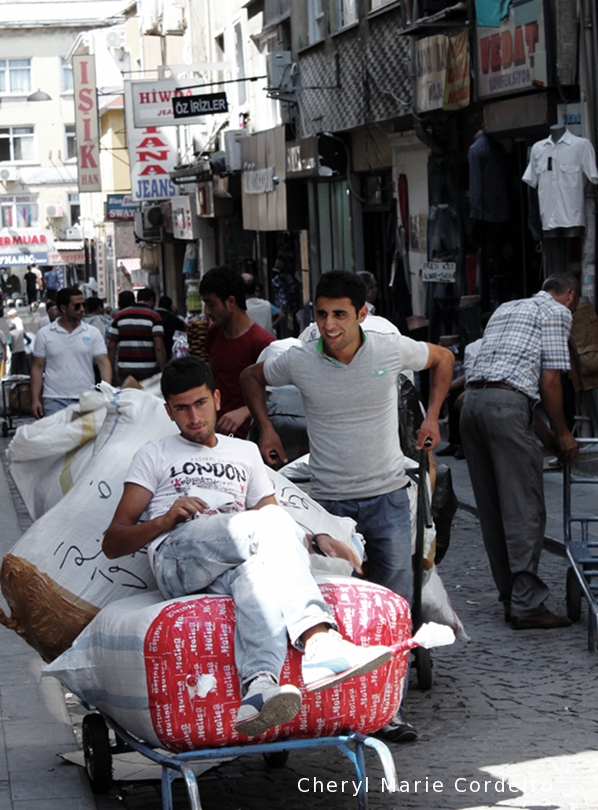 People are nice and there is always time for a laughter, and a kebap. 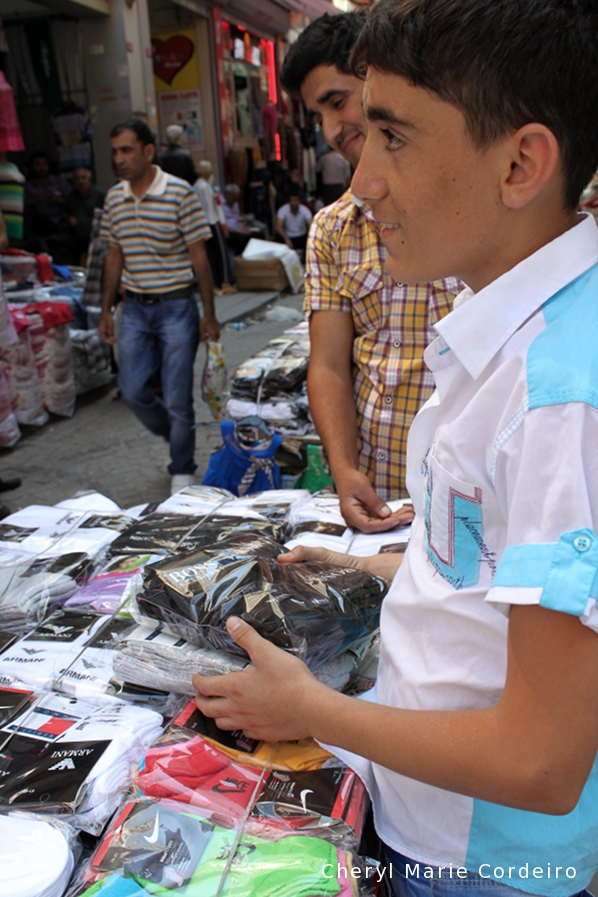 The narrow streets leading to and from the bazaar, up and down the hills, offers much more interesting shopping opportunities than the actual Bazaar itself. According to an unofficial estimate about one third of Istanbul is food. All the time, food is catered between small food stalls and the local shops. Service is impeccable, quality good and prices the local ones. Outside of the Egyptian market excellent cocoa and coffee beans could be bought, whole beans, or ground for you there and then. Highly recommended. Outside the beautifully crated gates of the Istanbul University. The mosque wall, where doves sit and children play.