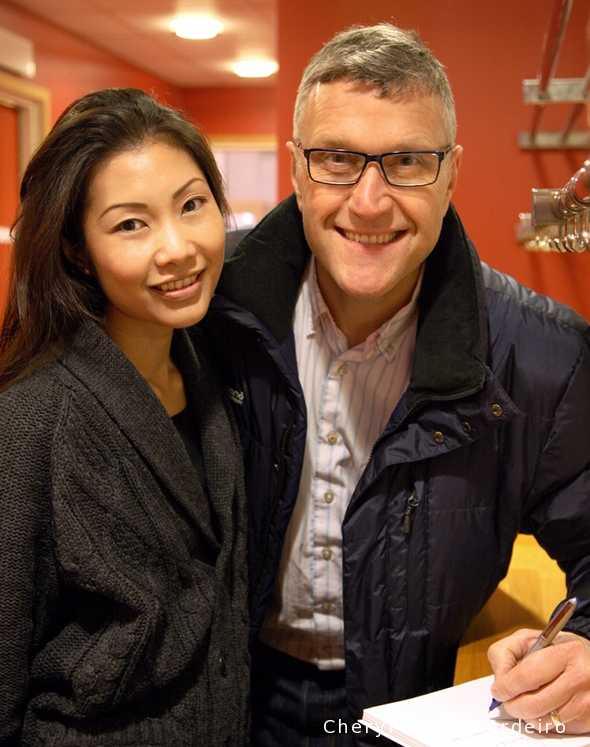 Cheryl Marie Cordeiro, with Anders Arnell.
Anders is a culinary edutainer who has a summer restaurant, “Arnell på Kajen” in Marstrand. His new book, MAT-ematikerna co-authored with Jan Tern is now out in the bookstands.
Text & Photo © JE Nilsson, CM Cordeiro 2014

Ongoing, a part bantering of ideas, part negotiation, of a large block of crystallised Porcelana cocoa bean chocolate dating almost thirty years back, that after tempering, would render the silkiest textured chocolate. Not being able to overcome the initial realisation that I have been eating decades old chocolate, I finally got around to the main thread of talk at the table. The idea was how to keep a consistent standard of quality that at the same time, made the signature of your culinary work. Service was a given, they were all artists and experts in their own culinary field of choice, there could be no other way in this business otherwise. But in the ever increasing modularisation of the individual’s niche knowledge and skills, there came the question of the paraph that made it just that notch more exclusive for the customer:

“How would you propose I do that?”
“I told you, get this block of chocolate!”

And so it is, all part of this year’s Passion för Mat 2014 theme, Ärlig mat or True food. Food that leaves a lesser carbon footprint, a non-kitsch understanding of sustainable living and a redefining of what is luxury and exclusivity, without a mention of those words. It’s all very practical and all very Swedish. Speaking with Torbjörn Eliasson, Director of Västra Gastronomiska Akademin, debating the finer points on the importance of being seated two hours ahead of when Anders Arnell and Nobel Dinner Chef Johnny Johansson take to the stage at Köksskolan.

Working in complement to the modularisation of the individual’s efforts is the new book MAT-ematikerna, by Anders Arnell and Jan Tern. The book uses basic logic in building block process to help place the individual in a greater awareness of the larger social context whilst maintaining the Self’s individuality and autonomy. The authors put forth seemingly contradictory rationality to the readers, such as “higher quality meat, at lower prices”. The human body needs surprisingly little food to survive and function healthily. According to Sweden’s Statistiska Centralbyrån, an average household in Sweden will waste about a fifth of the food brought home from the grocers. The solution the authors recommend – stop over purchasing food – while not groundbreaking, is certainly consciousness raising. Place instead, the extra finances currently spent on food that goes to waste, into higher quality products and improve your general quality of living, whilst at the same time, lowering the overall household food costs.

In general, Arnell and Tern invite their readers to consider the consumption of food in its wider scope, from its production, to its processes, transportation, marketing, use and consumption, and how that might in turn impact the world’s ecology and in some instances, contribute to the widening poverty gap in many developing countries that depend on the forces of globalisation to survive. 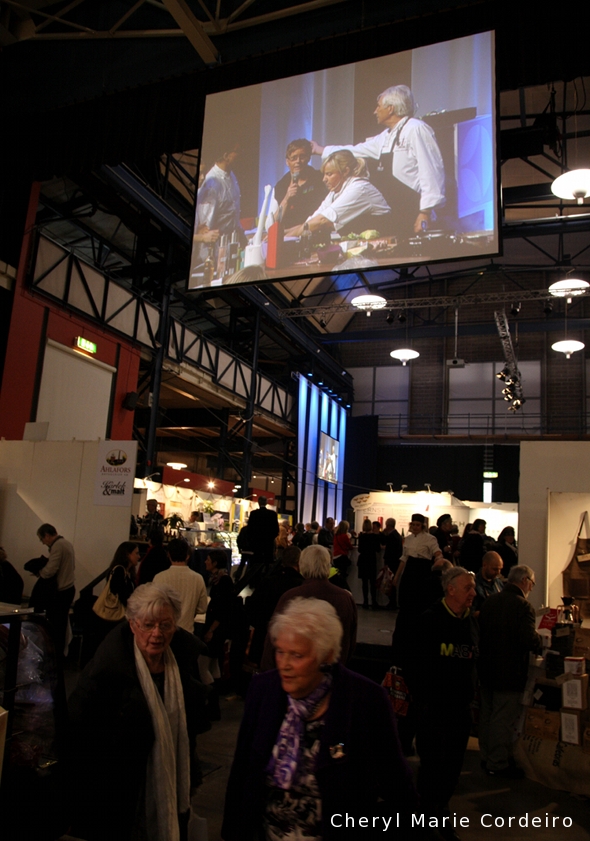 In keeping with the year’s theme at Passion för Mat, a redefining of what is luxurious is to go back to basics. Butter, instead of margarine. Homebaked / artisan, instead of mass / wholesale baked.

This ideology of going back to the basics, going back to what is ‘true’, supporting the production and consumption of food with as few processes in-between seems omnipresent in exhibits in stalls at the fair.

For several years, there has been debate in the Swedish press on the use and preferences of butter over margarine. Margarine was developed in the early 1800s during the post-Napoleonic wars when much of France was living in poverty due to the aftermath of the unrest. Made from a chemical substance oleomargarine, it became an affordable substitute for butter that the Emperor deemed suitable for use for the armed forces and lower classes.

With the first wave of debate in suggesting that butter was healthier than margarine [1,2], the industry came back with margarine products infused with omega-3 oils. This was not much of a success after further research [3] confirmed that the added omega-3 oils had little or no effect on the health of the consumers and that certain brands of margarine still contained higher levels of trans fats than pure butter. The latest of this perhaps now, global debate includes Unilever putting butter into margarine [4]. The grounding point at this fair – why not just go ahead and use pure butter instead? Short of churning the butter yourself if you haven’t got cream from your own cows, butter is simply, healthier and more eco-friendly. Oscar och den Lille, on why it is that Gammel Dansk goes with just about, anything. 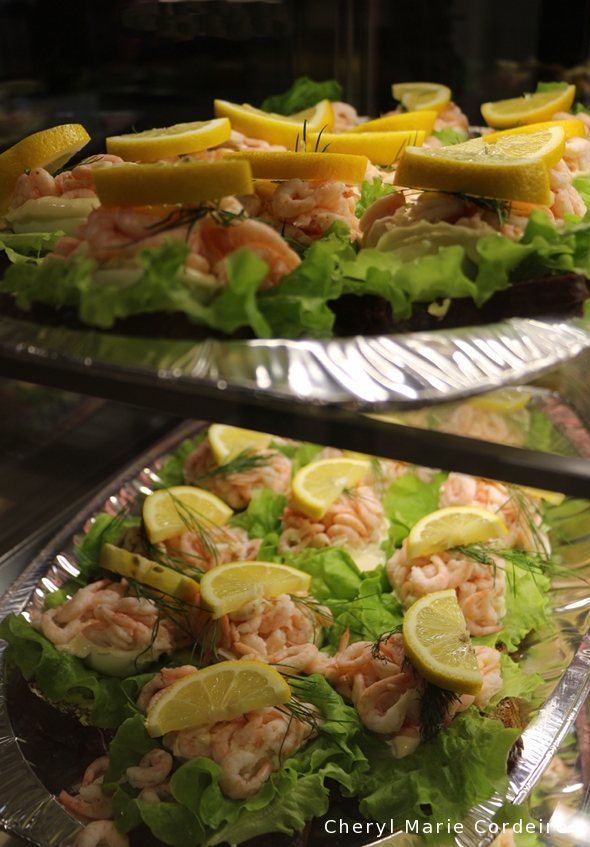 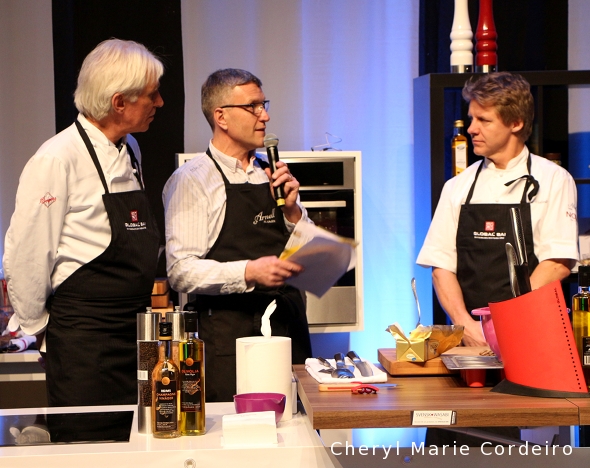 At Köksskolan, the purpose of which is to explain and expand on current culinary trends, share expert cooking knowledge while touching on new ideologies of sustainable living. We make choices everyday. And to lower the carbon footprint, it could be as simple as to eat strawberries when they are in season. If you wish to have strawberries during winter, pick them in the summer and freeze them, instead of buying them imported. That way, you’ll have lower price, better quality and less environmental cost. Thoughts that are part of the theme of Ärlig mat / True food this year. Sylvain Marron, by Sylvain Marron.
Open only on Fridays and Saturdays, and meetings by appointment only, S.Marron offers above all else, quality over quantity. He specialises in pralines and confections made-to-order, customised to your specific needs. A tiny stand at this year’s gourmet fair, outfitted with mostly his mousse filled, chocolate and caramel topped creations, perfectly in keeping with his passion for tailored quality items to the customer. Brödhuset.
They specialise in stone oven baked breads. At any one time, they have four different varieties of stone oven baked breads. A question from a customer at the time was, “Have you a bread that goes well with goose liver?” Yes, they did. It was a variety of sourdough. Though they did not at the moment have it at the exhibition stand, they could bake it for tomorrow’s round at the fair. “Would you like to place an order for it?” 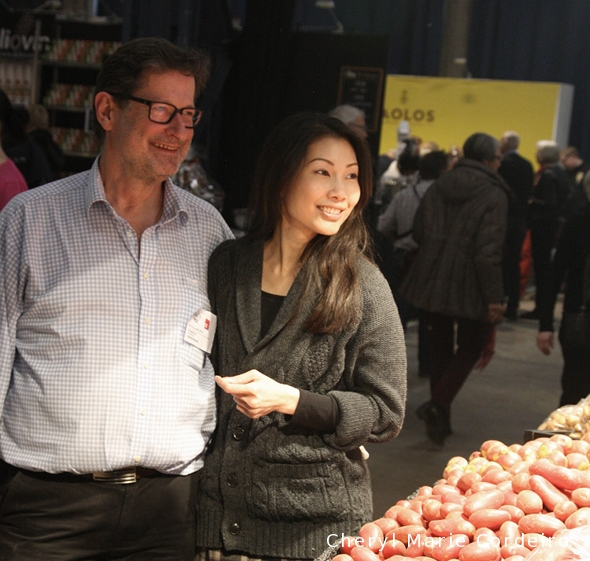 “Some potatoes, no matter how long you boil them, will remain uncooked.”
“Why is that?”
“They were bred for frying.”
With Dan Berntsson, the man responsible for educating the most of west Sweden on,
the genetics and varieties of potatoes. In one of the larger kitchens of the gourmet fair,
Chef Katja Palmdahl of Katjas Skafferi in Gothenburg, takes you on a tasting adventure. 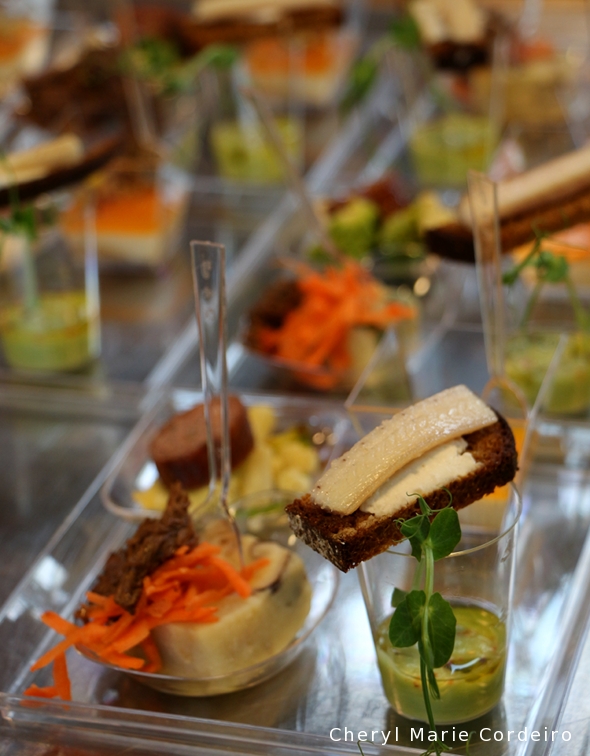 Hand assembled and neatly served on small trays. This is as close to a ‘mass produced’ lunch as it gets here. 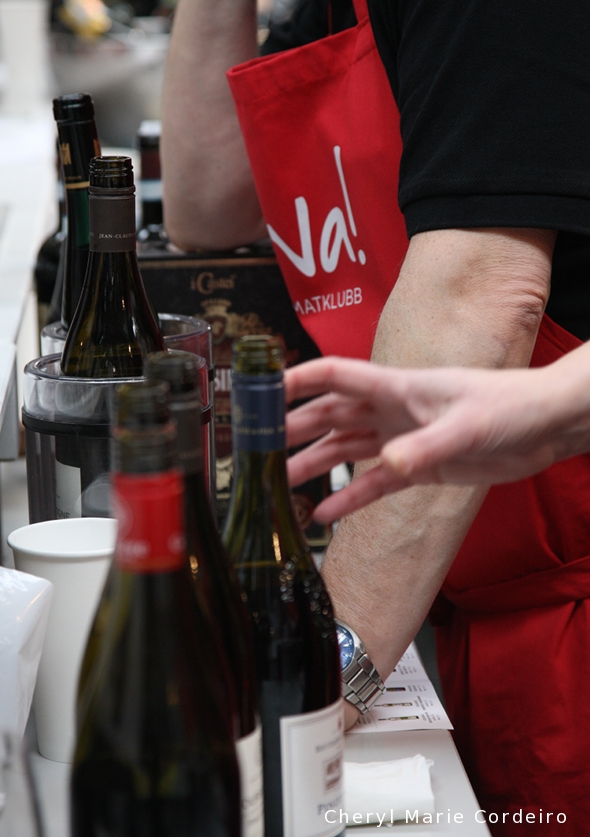 The circle does not close if Dionysus smiles not upon them. 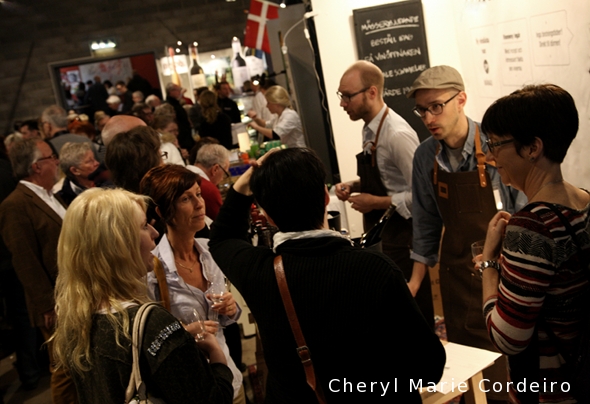 Perhaps an extension to the year’s theme on True food is how this food fair has once again provided a contextualized space and ground for the meeting of people with like-minded interests.

As much as it is more common these days to work across borders, in virtual spaces, nothing compares to the human disposition of personal contact. Conversations across a table, with a curiosity of different foods, which can then be discussed in dialogic feedback, lay the foundational blocks to friendship building. Simple tactile exchanges prove invaluable for gauging attitude and affect to questions such as, “How is your food? Was your choice of lunch of varmkokt lax better than my biff med chèvrebröd?” An immediate presence enables the rapid succession sharing of humour between the interlocutors to, “Why on earth did you buy bacon crisp sprinkled goat’s milk ice-cream? Is that really made from goat milk? Is it good?” Watching Masterchefs demonstrate their tacit skills in filleting perfect that fish that is then immediately tossed into the pan drizzled with butter made hot, listening to the searing sizzle that renders the most delicious of aromas that only those present can experience and describe, is priceless, and certainly, lagom luxe.