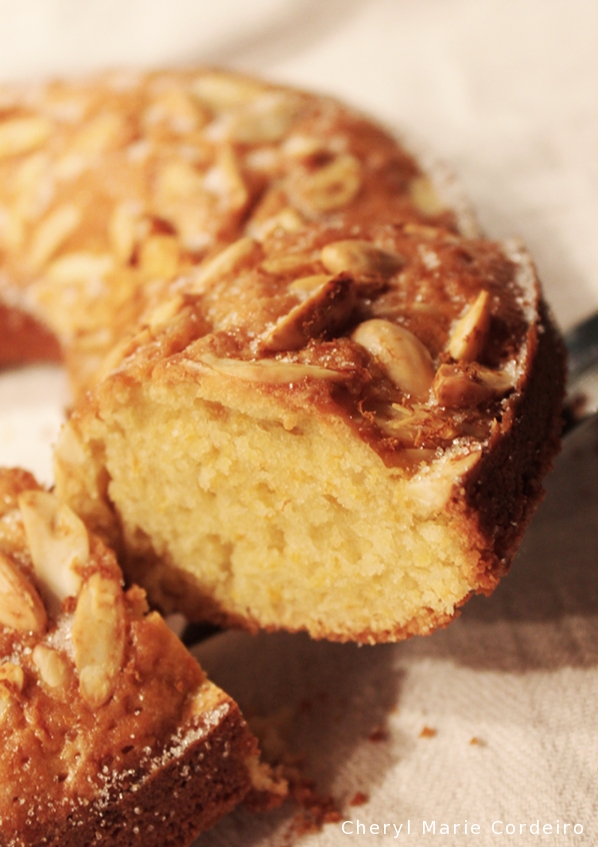 It was the search for that perfect xocolata calenta in Barcelona 2011 on a weekday morning that found me wandering the streets of El Raval in the neighbourhood of Ciutat Vella, also known as Barrio Xinès or Barrio Chino, close to the quarters of Barri Gòtic, that landed me tasting the most wonderful variation of the Eurasian semolina almond cake, infused with orange.

Working on the batter of this cake, I can’t help but return to the words of the protagonist in Proust’s Swann’s Way, the first of seven volumes to À la recherche du temps perdu (published between 1913-1927), on when the petite madeleine, crumb soaked in tea, touched his lips:

“An exquisite pleasure had invaded my senses, something isolated, detached, with no suggestion of its origin. And at once the vicissitudes of life had become indifferent to me, its disasters innocuous, its brevity illusory – this new sensation having had on me the effect which love has of filling me with a precious essence; or rather this essence was not in me it was me.”

Except, the first encounter with this cake was not at all Proustian petite madeleine. It was rather very much in the ‘here and now’, thus rendering the opposite effect of me going on a spirited hunt for a recipe I could bring home in order to create Proust’s petite madeleine with this, served in Escribà, La Rambla, Barcelona, top sugar dusted, almond strewn, orange almond cake.

Pastelería Escribà at La Rambla Sant Josep, Barcelona is housed in a building decorated by Antoni Ros and Eusebi Güell in 1902. A former pasta factory, its facade is decorated with numerous feminine forms to signal abundance, fertility and the harvesting of wheat. 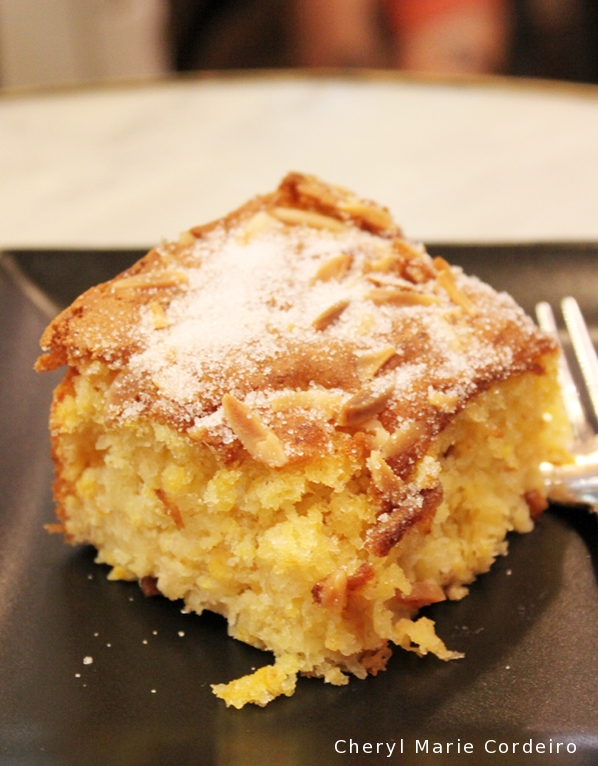 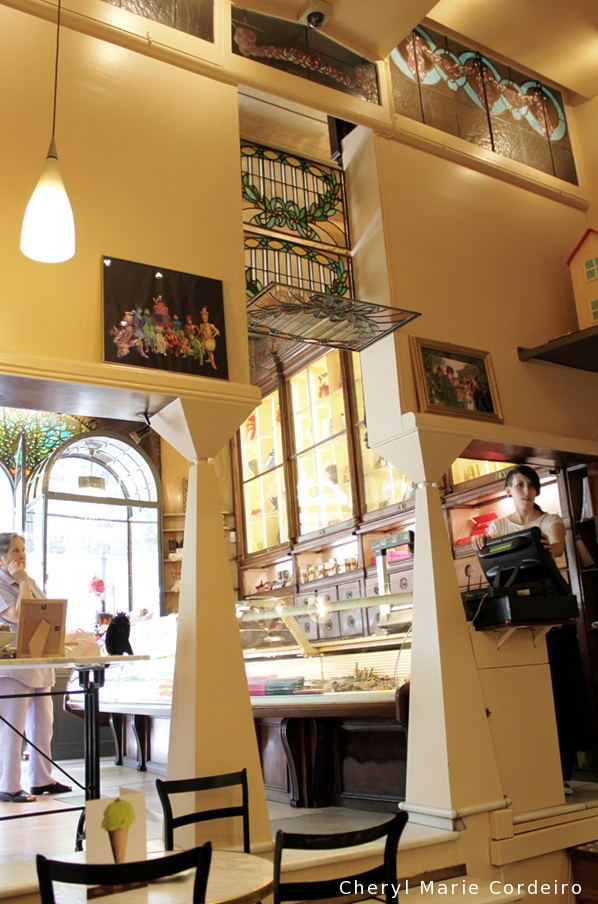 The interiors of the café, blanketed in shades of light to deep ochre, is perfectly modern, in complementary contrast to the art-nouveau facade just as you step outdoors. 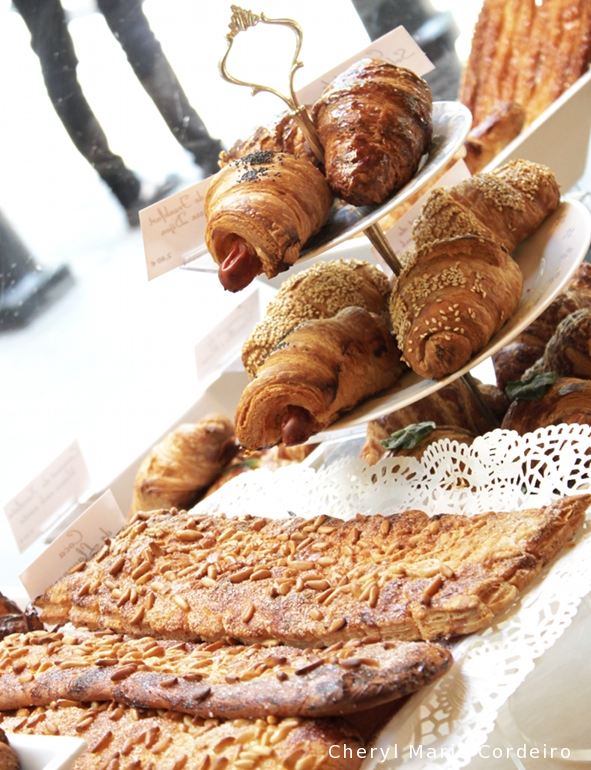 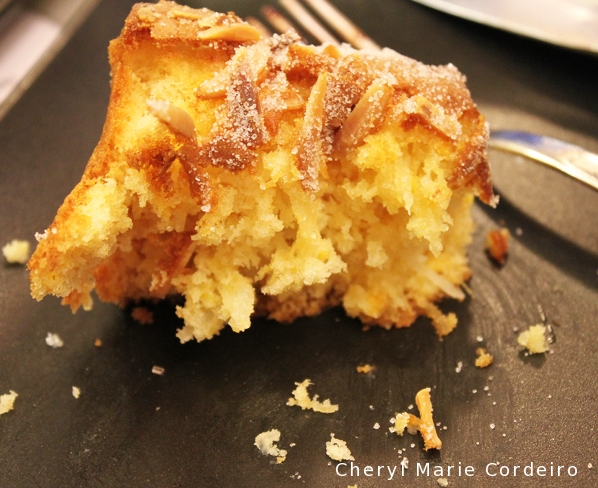 As I sat in the café, ordering my second cup of xocolata calenta for the morning (you can never try enough of these cups of Spanish hot chocolate when roaming Barcelona), I witnessed an elderly woman walk into the café and request for a full half tray of this cake (enough to feed twenty persons), to be packaged in brown wrapping paper and ribboned for a takeaway. Definitely for an afternoon round of coffee / tea with family or friends back home, I thought, and a brilliant idea. I would have done the same if my living quarters were walking distance from here. 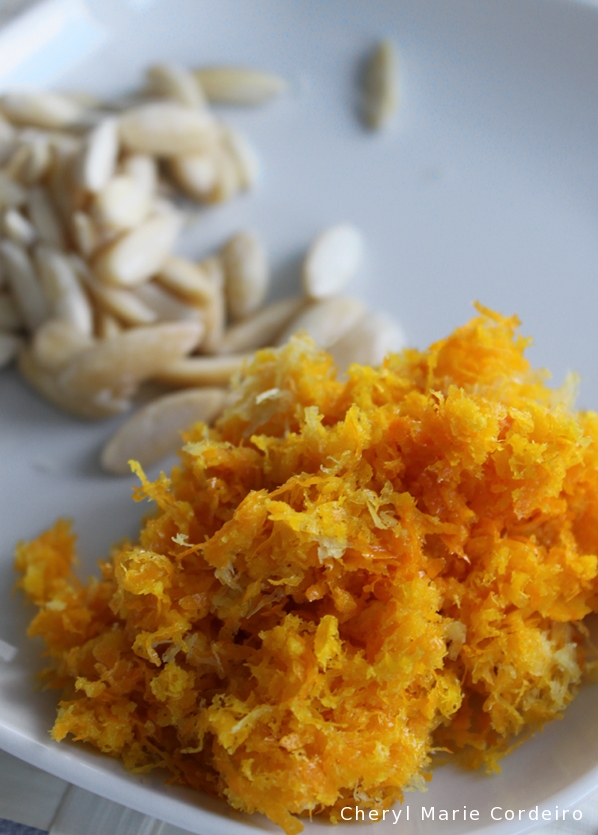 The idea in making this cake is to first boil, then simmer the oranges with as little water as you can get away with, until the mixture is reduced and you get orange pulp. Usually if the oranges are chopped finely enough, there is no need to use a blender thereafter. It is simply to add the orange pulp concentrate to the other ingredients when needed later in the recipe. 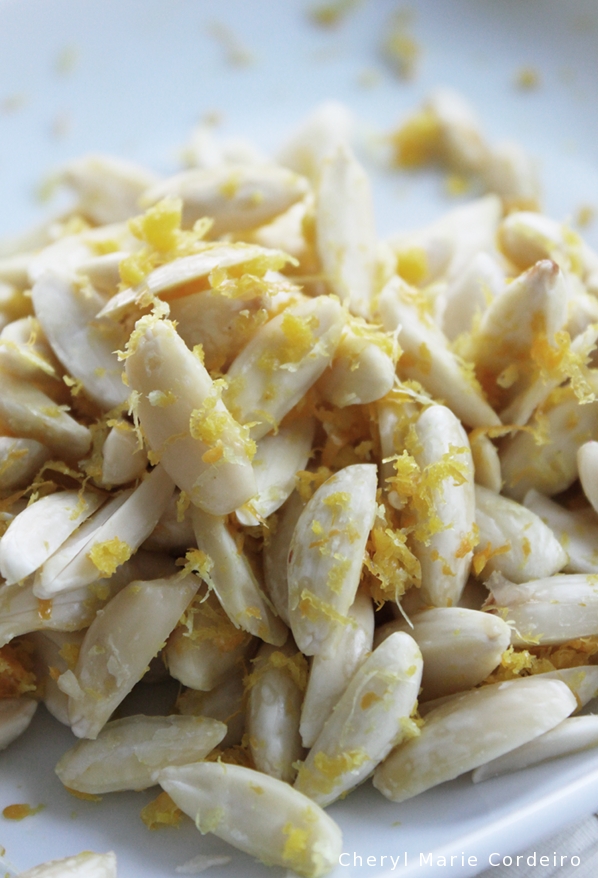 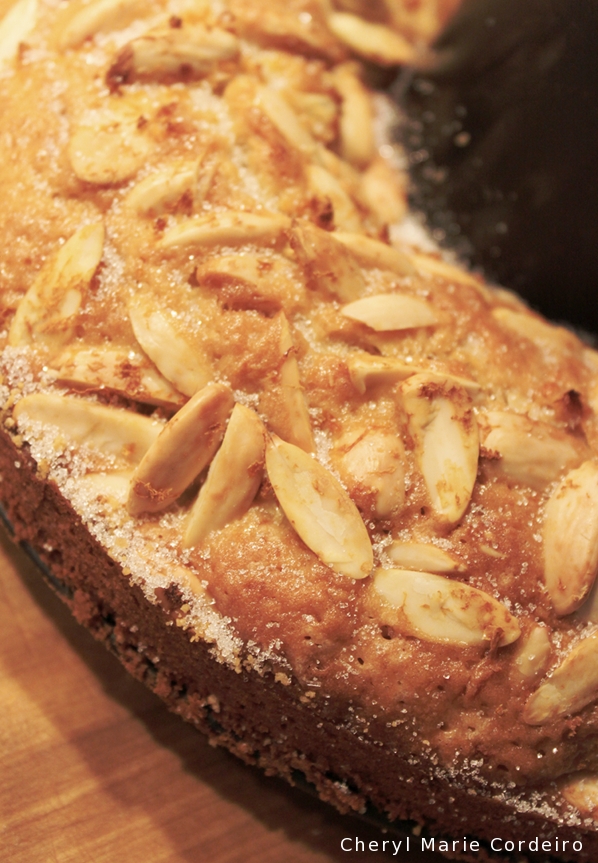 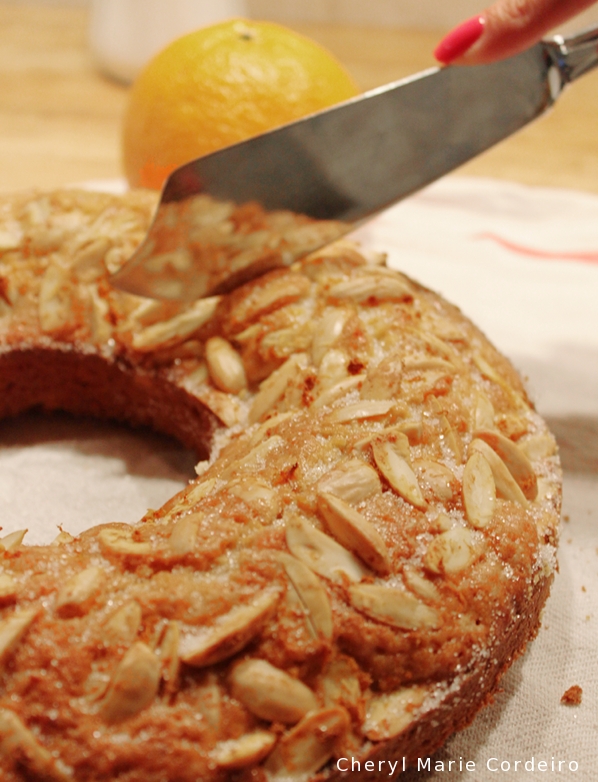 To be enjoyed – with tea?

The eggs and sugar are whisked till a fluffy light yellow. After which, the ground almonds and semolina were incorporated. And here, I’ve tried this recipe both with and without butter, to which I usually end up making whichever I prefer for the day. Adding about 100g of butter will render a cake that keeps its moisture for longer. A cake without butter will land you a lighter sponge cake. Finely sliced almonds were drizzled on top of the batter as the last thing before the pan goes into the oven.

This cake was baked for about 45 minutes at 160C in a bundt pan although a rectangular cake tin will do too (as served at Escribà). Once the cake is out of the oven and cooled, it was sprinkled generously over with caster sugar.

In another long weekend approaching Sweden when the Nordic region celebrates Midsummer, there is not much else to do once this cake is out of the oven, except to sit and enjoy it with tea. Its softly soaked crumbs certainly now brings me back to the streets of Barcelona, and how it really was that perfect xocolata calenta along Carrer d’en Xuclà 6, my true petite madeleine, that instead led me to Escribà.