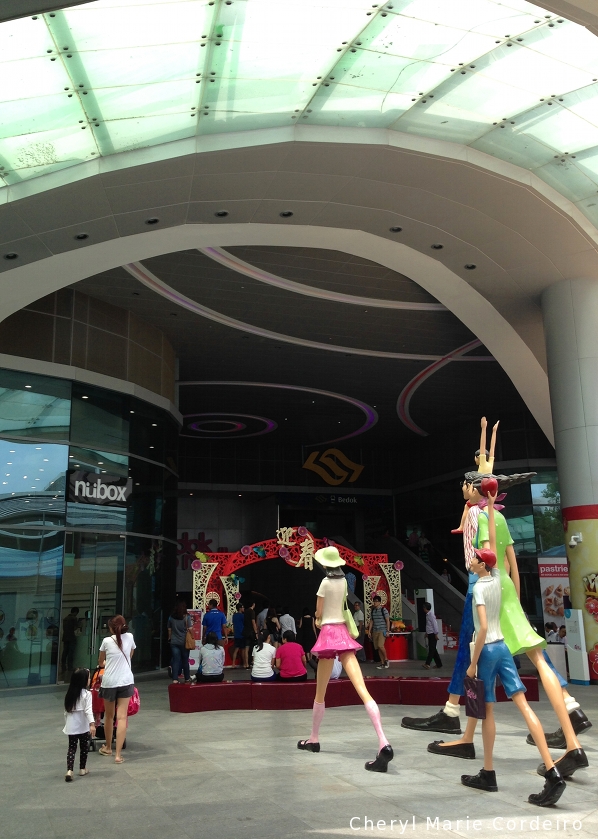 The geosemiotics of Singapore. Towering plastic sculptures in the city’s heartland. Freud, Goya – or both? I would beg to differ on the perspective that Singaporeans have no sense of humour.
Text & Photo © JE Nilsson, CM Cordeiro, Sweden 2015

They walked as a pair in complete synchrony in rhythm and sway. Finding a seat in the train, they sat comfortably, next to each other. After contemplating the signs hovering above the bright coloured plastic seats of the train for all of three seconds, the older of the two decided to take the seat marked for the disabled. She was after all in the elderly range in the context where she now found herself. The pair gestured animatedly as they talked while they sat for their journey. The younger of the two had at all times in hand a mobile phone where utmost attention was paid. If there was any sort of hierarchy between the pair, it was not much noticeable except that the older seemed to speak much more than the younger. And when the younger was too engrossed with the phone, the older of the two would peer over the younger’s shoulder, inquiring in expression of what it was that made the small screen so interesting to the younger. The younger did not seem to mind this intrusion of space, a normalized behaviour that had by now become an expectation.

The pair seemed to share a language that no one else in the immediate surrounding shared. At times, the older of the two leaned in closer to the younger, as if to emphasize a point she was making, lacquered fingernails on fingers that cut the air in downward motions. The younger, eyes transfixed onto the mobile phone screen, nodded and sometimes came with a counter perspective. The older however, did not seem to budge from what she said earlier, faced determined.

They were a modern pair, yet different in their manner of dress from those in the immediate surrounding. The people in the surrounding were more casual in dress. A t-shirt, a pair of bermudas, and some rubber slippers. Where they were in the heartlands, the more fashionable individuals donned Havaianas.

The older of the pair had on a set of patterned tights that she carefully matched with a fuchsia t-shirt. The equally close-fitting top was decorated with white rhinestones that prismed under the afternoon sunlight that strayed in through the windows of the train. The younger of the pair wore grunge. Metal studded black baggy pants with likewise metal studded white top. This theme was reflected also in the shoes and bag carried by the younger.

As their point of destination arrived, the pair raised from their seats, and in tandem, as fish in newater, stepped through the sliding doors of the train. They were mother and daughter.