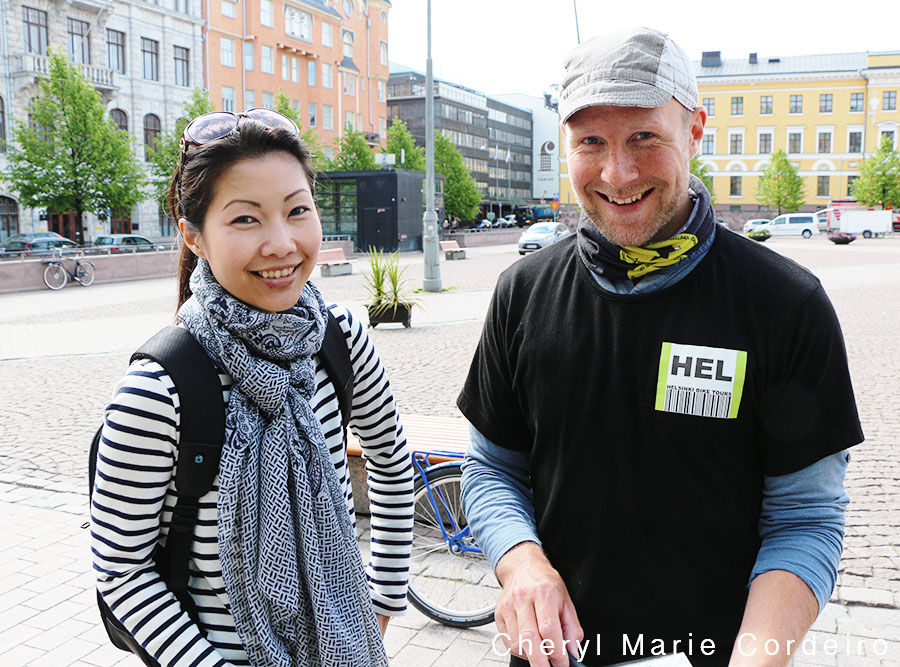 I took one last look at the map before stepping out of the door. Kasarmitori Square. Right. I wasn’t sure if I was going to find the place, but thought to try, because that was the meeting point where I read a bike tour of the city of Helsinki would begin. The tours leave in a group of maximum eight persons twice a day, at ten in the morning and at two in the afternoon. I made no prior online bookings at the company’s website, but noted that their bicycles were single geared of Finnish make, and in an identifiable cobalt blue. Easy! All I had to do was to make it to their office, locating it by spotting a row of conspicuous looking chirpy blue bicycles parked just outside.

After about a half hour’s walk, and reaching Kasarmitori, I encountered no cobalt blues. So I decided to walk around the block in search of these bicycles. After another twenty minutes of circling the block, where the meeting time was coming up fast, I decided to go back to Kasarmitori to wait at the designated meeting point.

I was fortunate enough to encounter a couple who stood in the corner of Kasarmitori square, each equipped with a gleaming blue bicycle. I smiled and hopped right to their side, “Do you know if it’s possible for me to join this tour group? I made no prior bookings.”

I was told that the tour guide would be right back in five minutes. So I waited. After just about five minutes, a person from HELtours [1] appeared, on his bicycle.

– Sorry, I made no prior bookings. Is it possible for me to join this group? Or do I need to make a booking? Do you have enough bikes left? I haven’t cycled in ten years. Do you even want me in this group? Because I could be a liability, I could crash or fall off a cliff and it’ll be too much paper work for you to fill out…

– Yes, sure you can join – welcome! But yes, we have this liability form for you to sign.

So I signed my life unto my own hands, and so began a most pleasant city sightseeing tour, on a bicycle stored in an underground garage belonging to a hotel. The name of our urban tour guide was Jari, and he would take the group in a three-hour ride around the city of Helsinki.

The heart of Helsinki where the old markets are located around the central station is a neat, tightly developed area. Public transportation in Helsinki is consistently ranked tops in Europe [2], but if going by the route of the airport bus that goes in a straight line from airport to train station, one finds that the city core is easily navigated by foot. Taking an in-between option of transportation, the city seems designed for bicycling commutes.

“This is not fitness cycling”, one of the first things Jari said to the group before heading off from Kasarmitori, which was well and good seeing that I could not personally make it uphill to the Ursa observatory at spinning class pace. The three hour ride sweeping the inner city ring with moderately undulating lands was done at good pace. Included along the way are coffee stops at picturesque locations that offer a splendid panoramic view of housing districts, harbours and salt water reservoirs.

What I got a feel for when cycling was the philosophy upon which the city is planned and built. Noticeable is the low lying landscape of the city, with hardly any skyscrapers in sight. As Jari, who is too a professional wildlife guide, explained, there’s been a conscious policy in the city’s urban planning to keep the skyline low, “so that we can see the sky”. In an absurdly simple manner, it occurred to me that what our forefathers understood and took for granted as nature’s given, might today be a complete luxury in a modern metropolis with slivers of sky available for viewing between gleaming glass paneled skyscrapers on a smog free day.

The other initiative that kicks in when you’re bicycling around the city, between pedestrians and tram tracks is that you learn the city’s road etiquette. Bicycles stand in single file when at traffic lights because the lanes are shared with pedestrians. Trams give way to cyclists more often than what is done in Gothenburg. And cyclists give way to pedestrians, ideally more than I did on my round.

I appreciated how this sightseeing incorporated a lot of flexibility. After a brief round of consensus, the small group stopped over at my accommodation quarters long enough for me to grab a coat that I so weather optimistically left behind when I walked out in the morning. While there is an outlined route of sightseeing, the experience told that it’s possible to include specific areas of interest if the time schedule allows, and if the other tour companions agree. While it is considered perfectly normal to bicycle around town come rain or shine, with ponchos for rainy weather, HELtours do make concessions on meeting times if the weather proves too impossible.

Bicycling through Helsinki, with cobblestones at your feet and the smell of grilled salmon at the harbour front when you stop at stoplights, can be described as an artisanal experience. This was my first bicycle tour of a city, and if all city tours by cycling are this pleasant, I am encouraged to explore more such options of sightseeing in future. 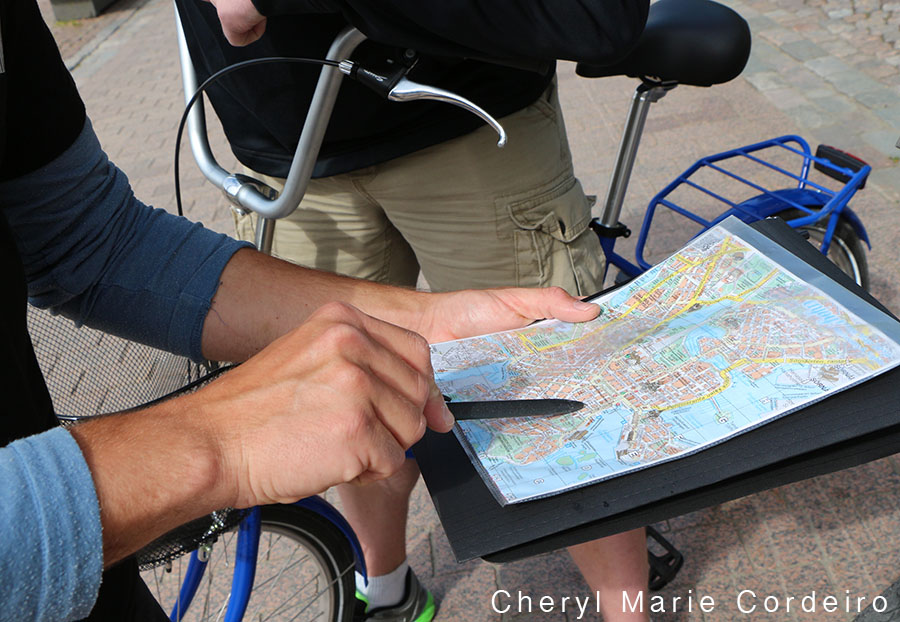 Jari, briefing the group on the sightseeing route. 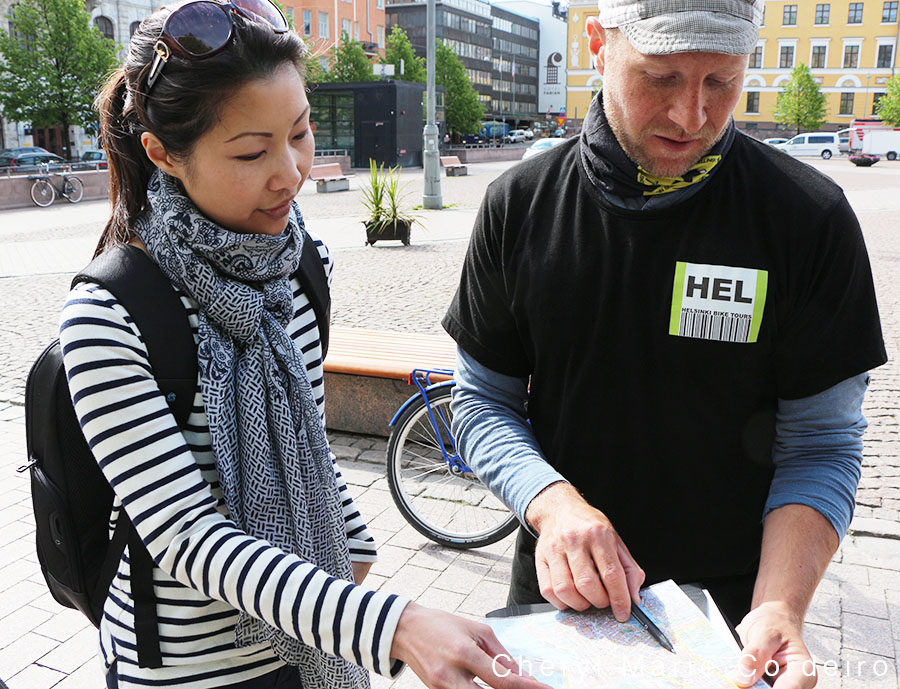 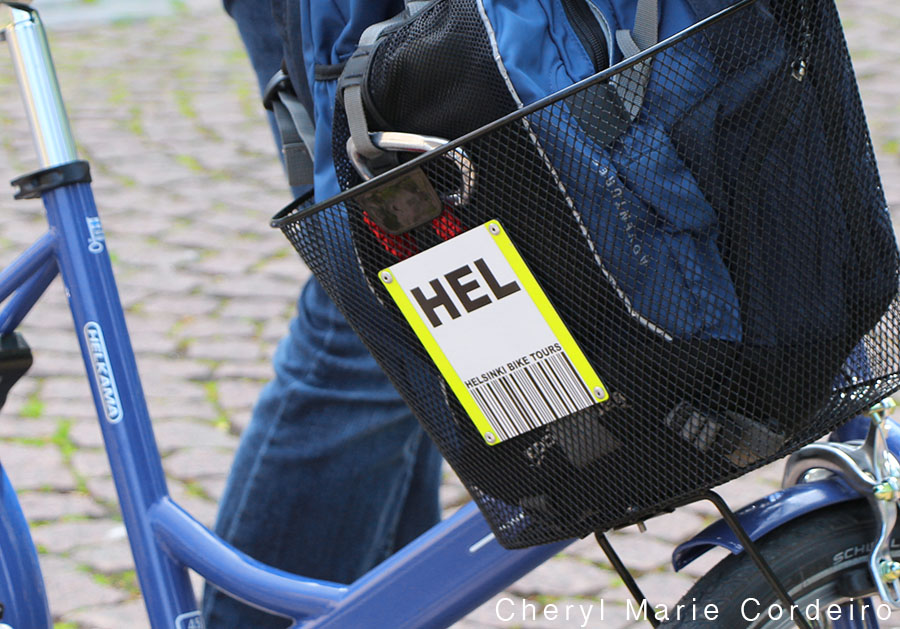 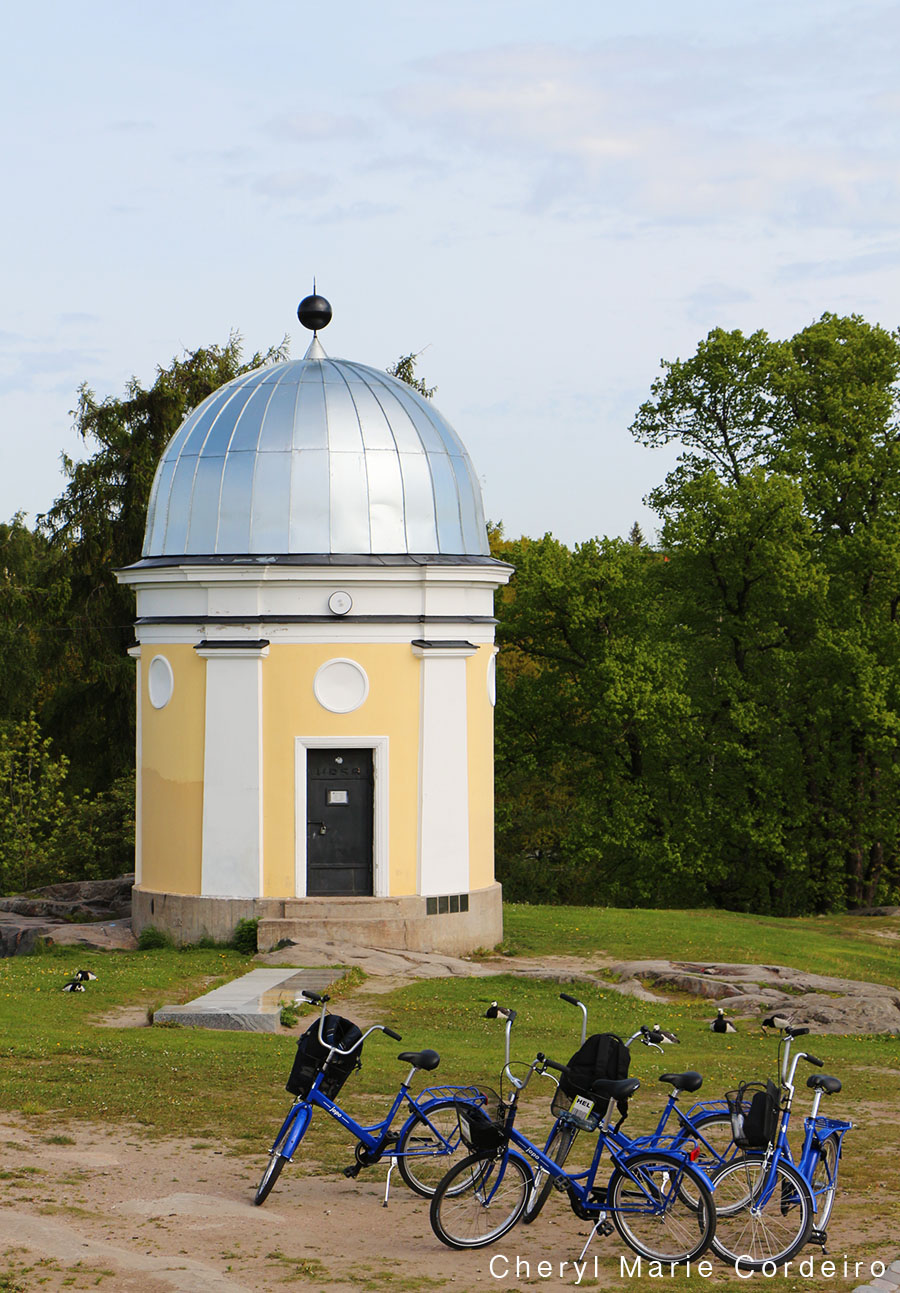 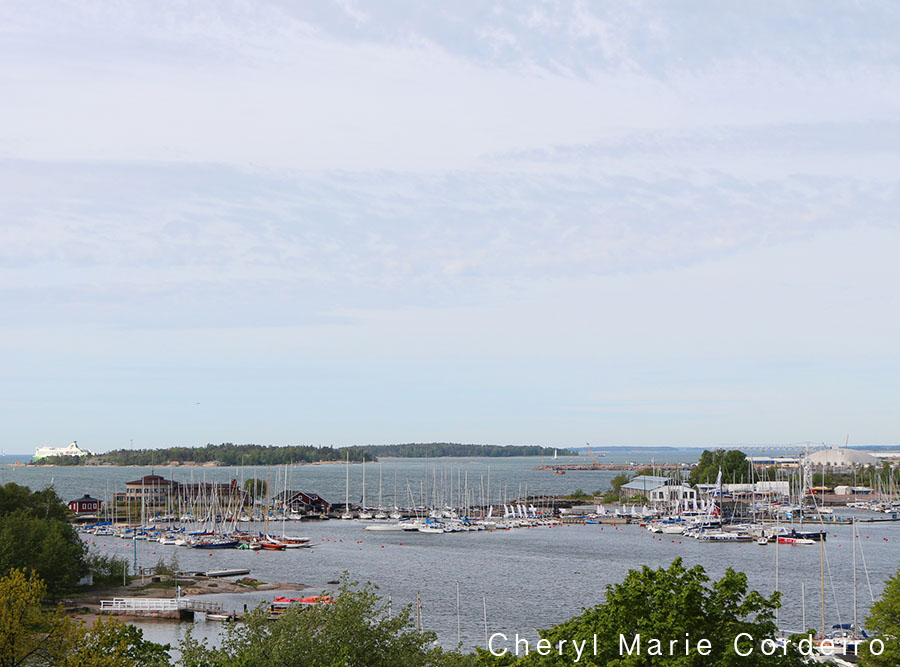 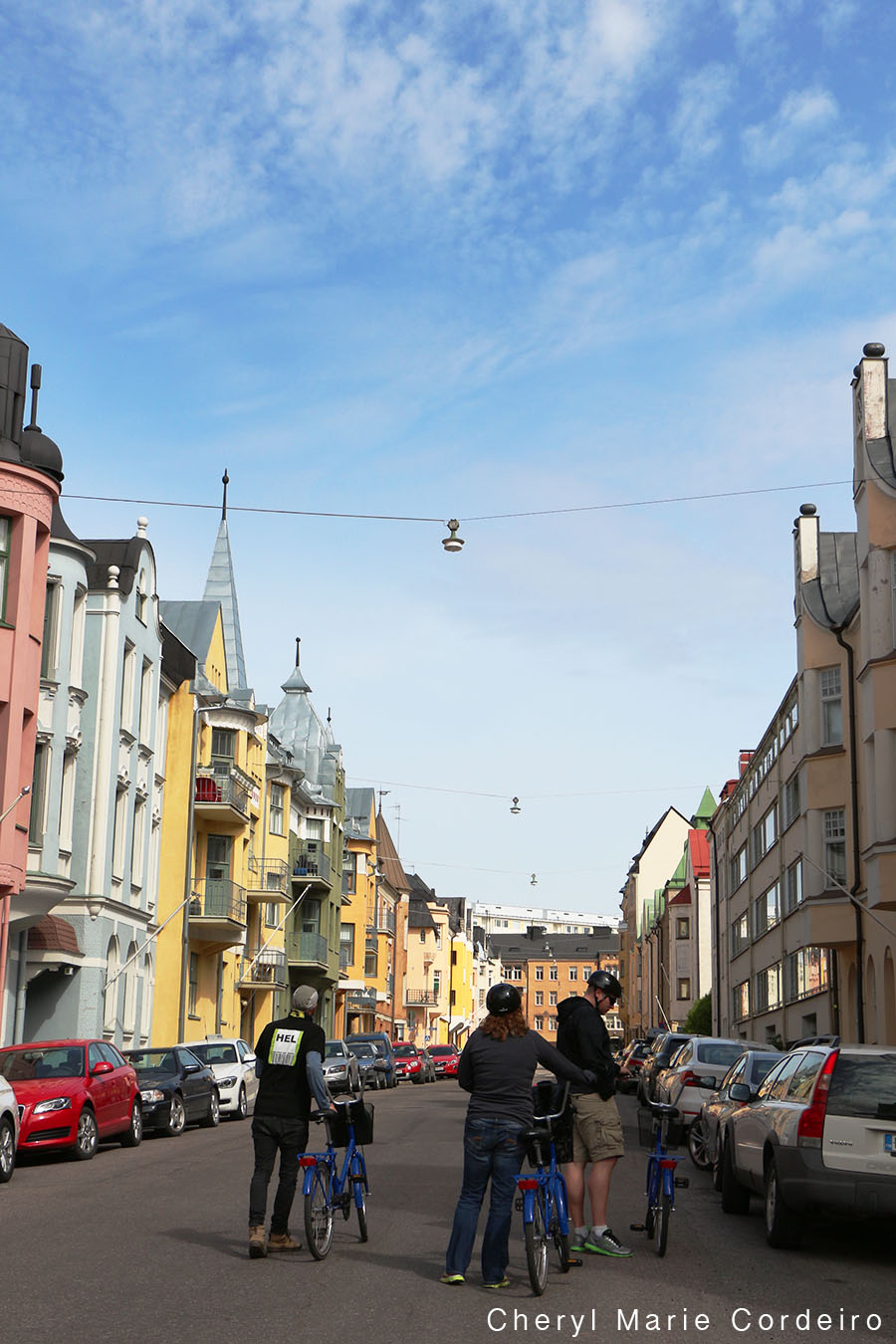 Living quarters around Ulrikasborg, where some Finnish drama series have previously been filmed. 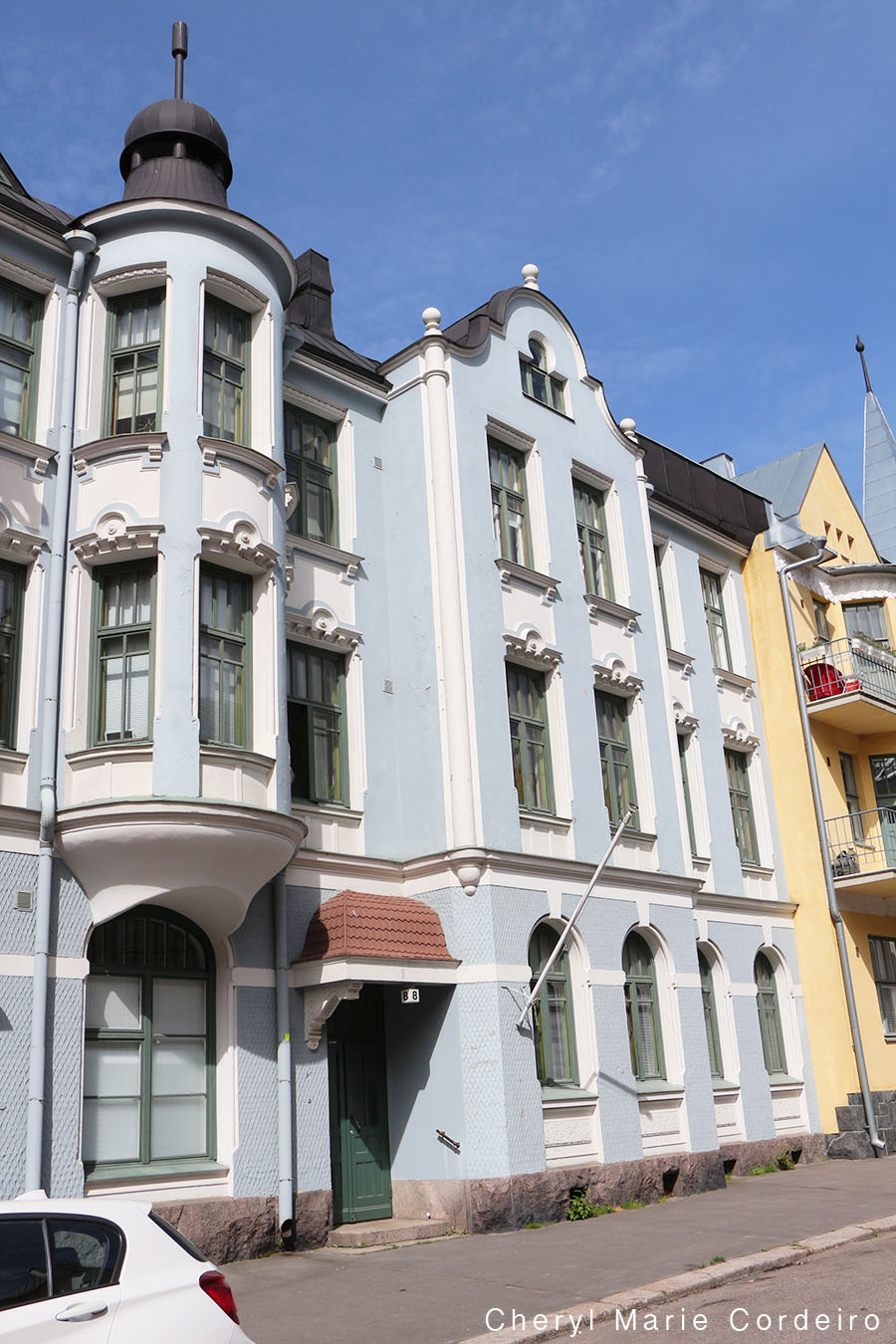 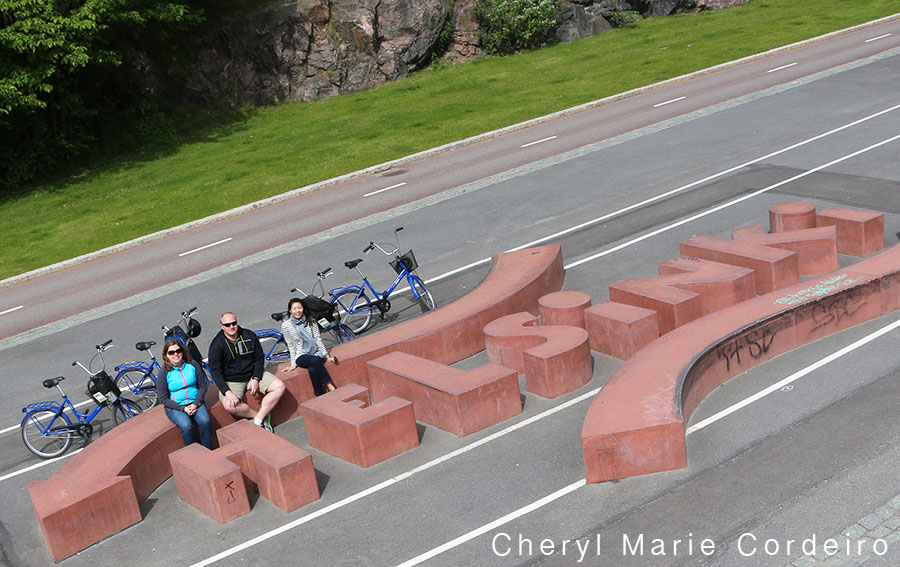 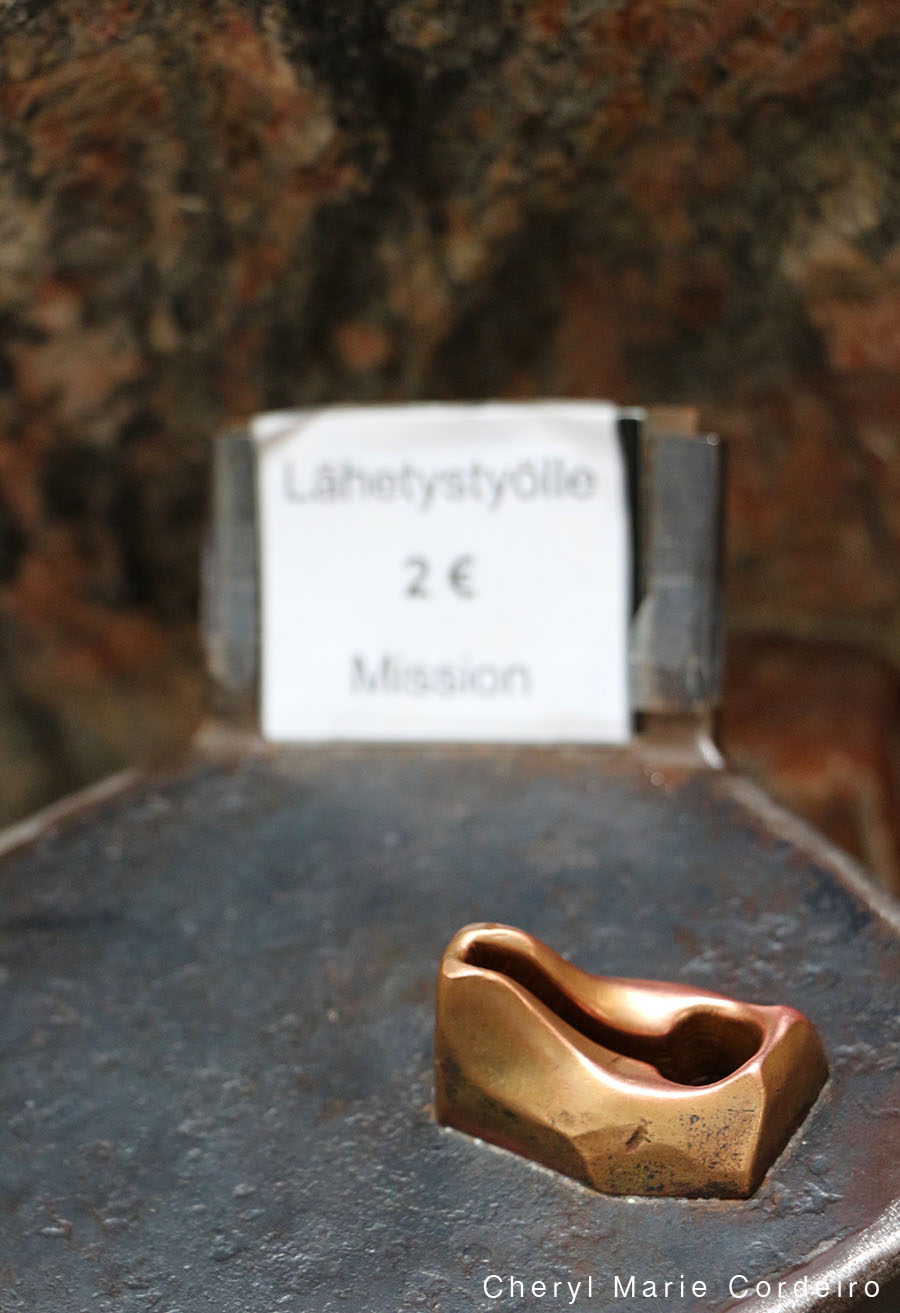 Design details inside the Rock Church, so named because it is excavated directly into the bedrock and roofed with a copper dome. An ice-age crevice serves as the altarpiece to this church that was completed in 1969. This attraction is located at the end of Fredrikinkatu. 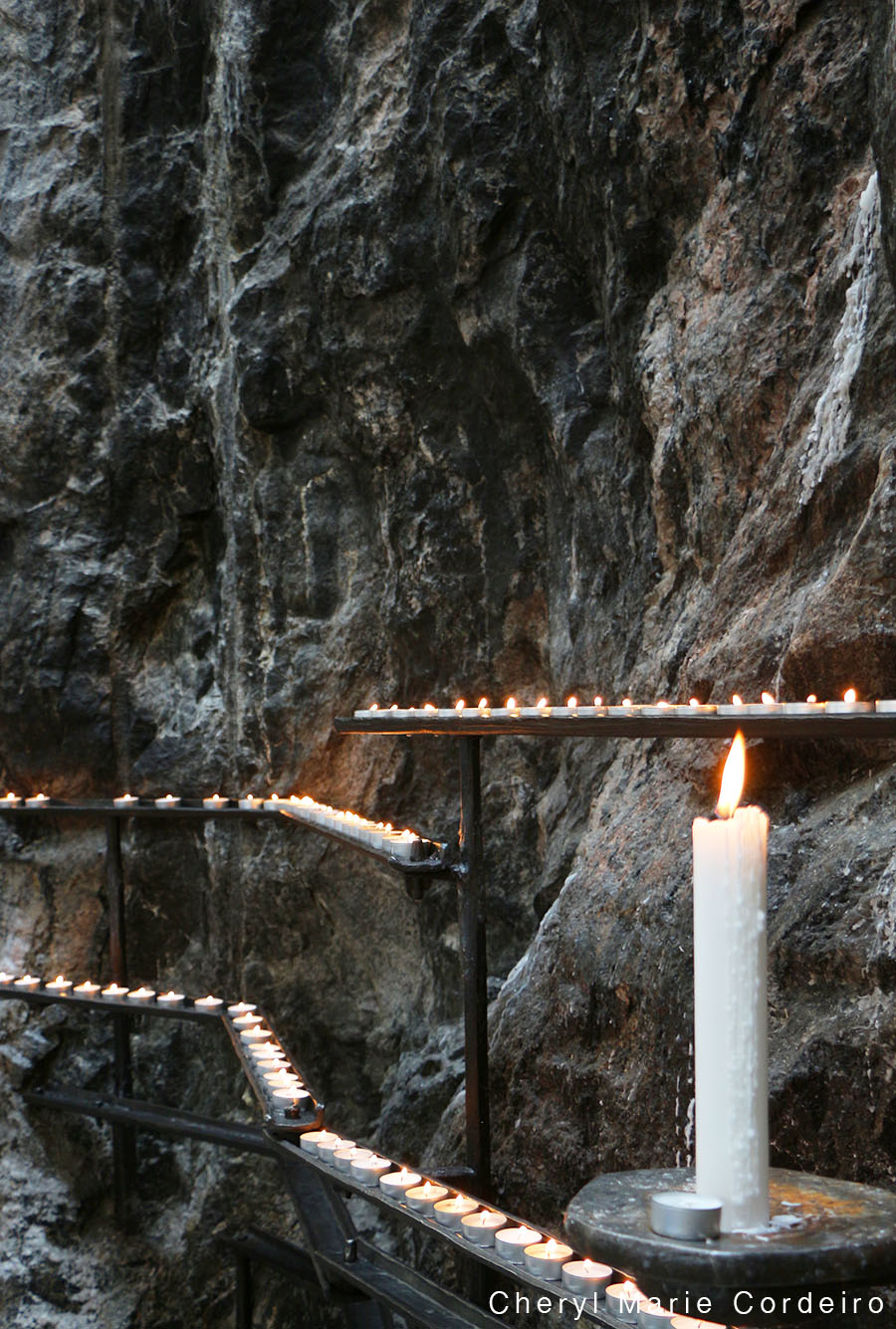 Candles for a prayer or two. 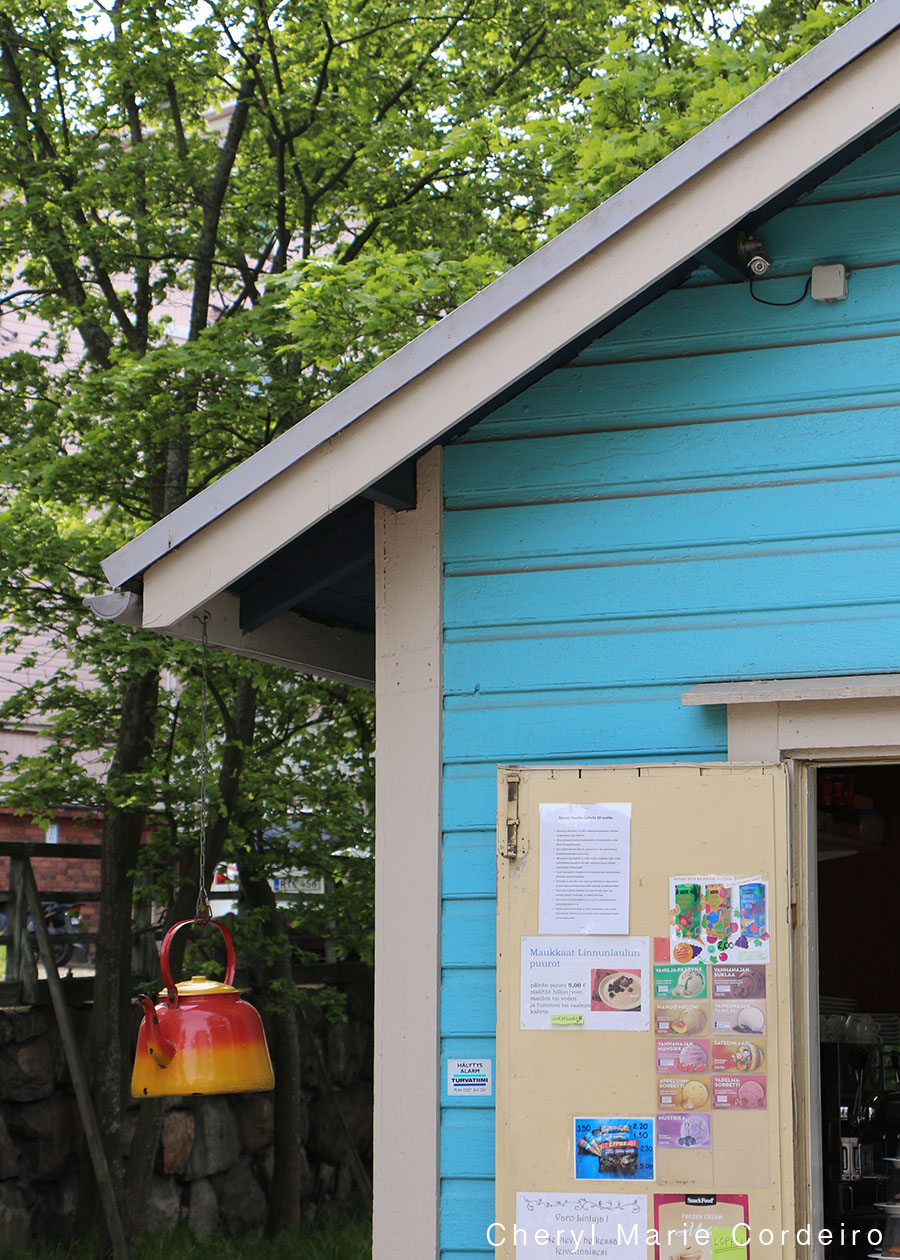 The blue café, a coffee stop along the way. 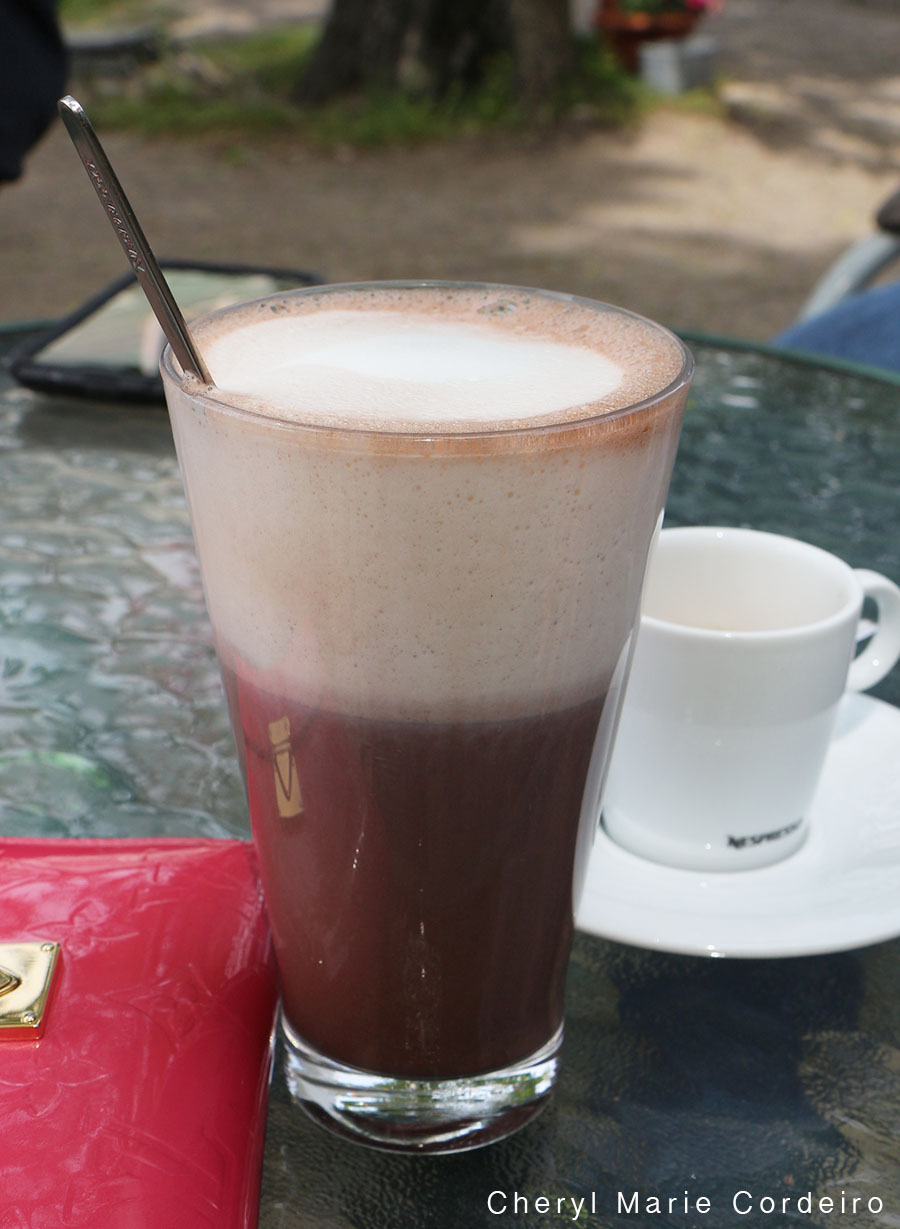 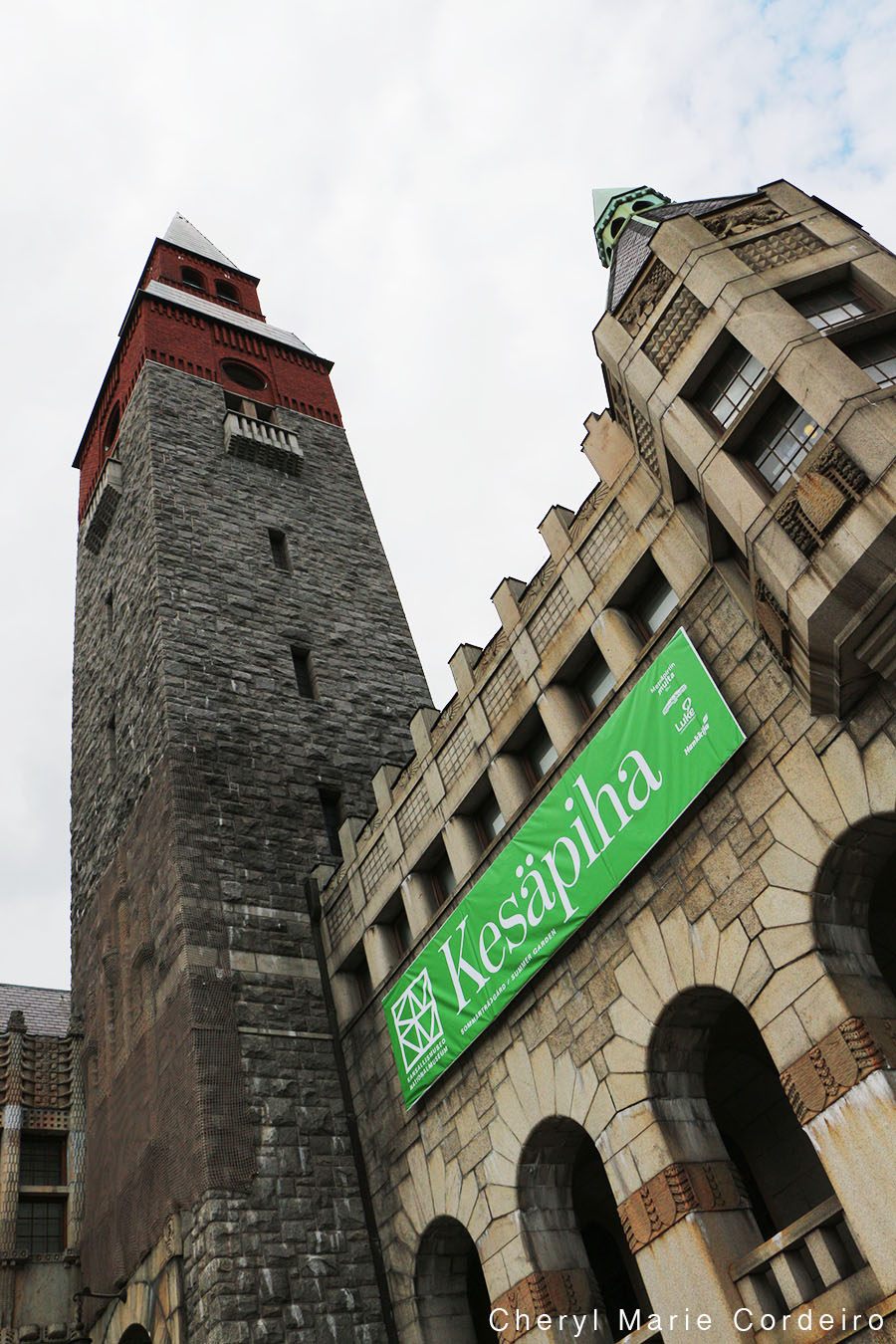 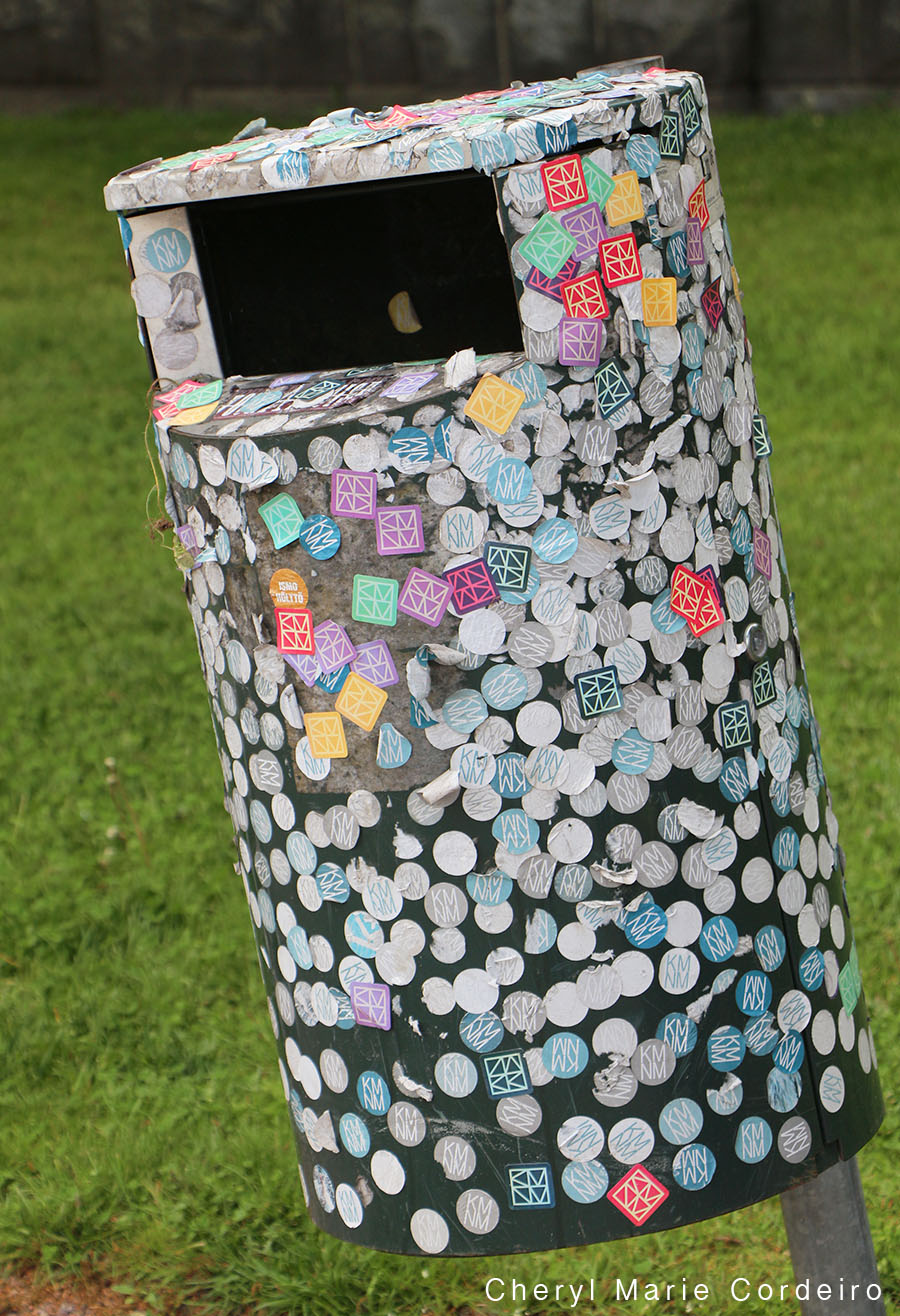 A work of art on its own, the litter bin standing just outside the National Museum. 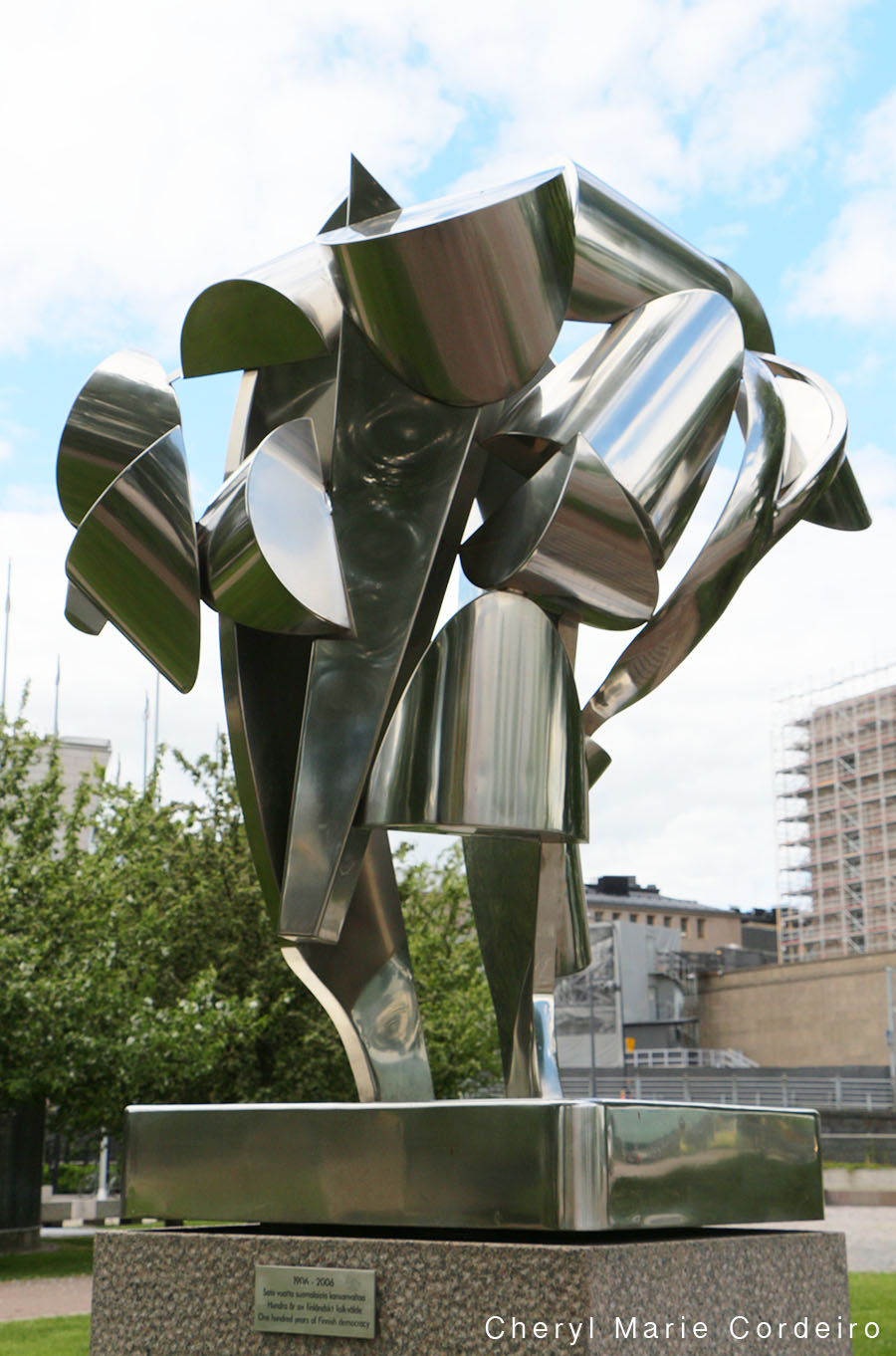 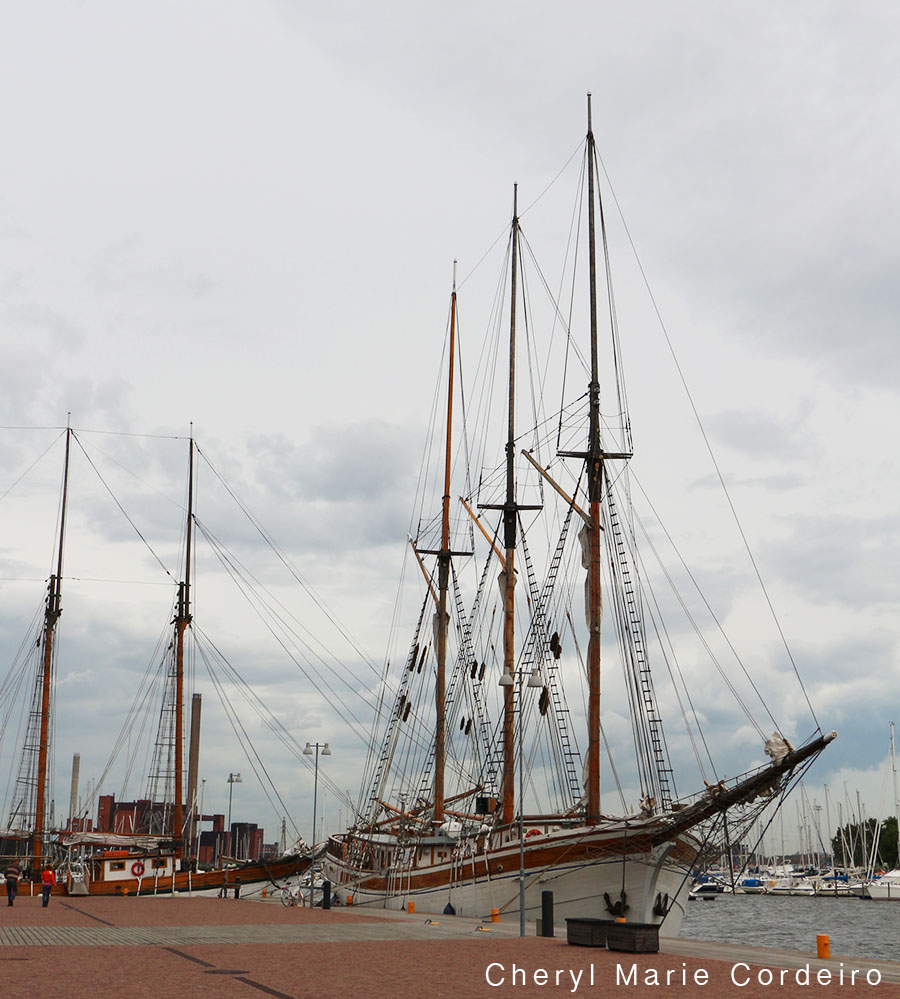 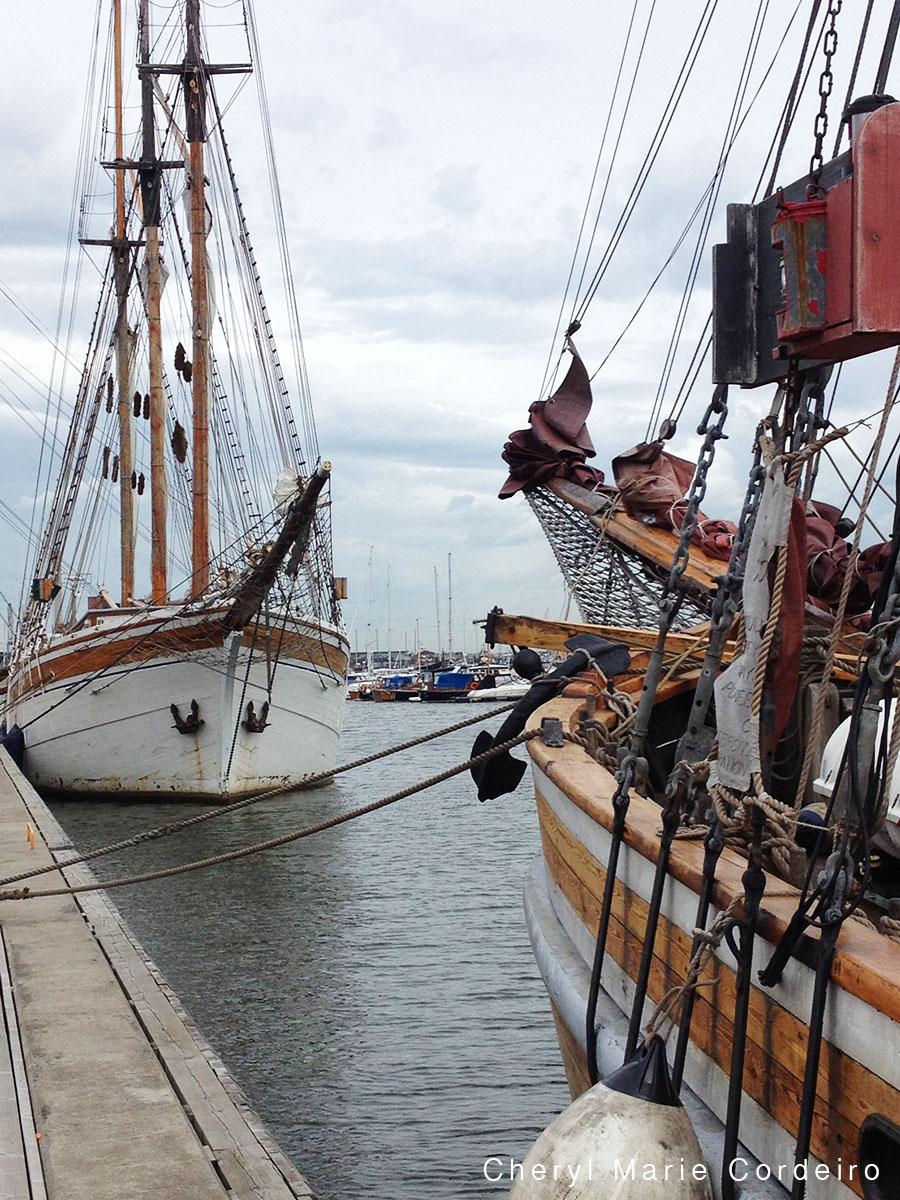 Tall ships dock intermittently at the harbours. Apart from these beautiful ships, the harbours of Helsinki are known to produce heavy duty ice-breakers. 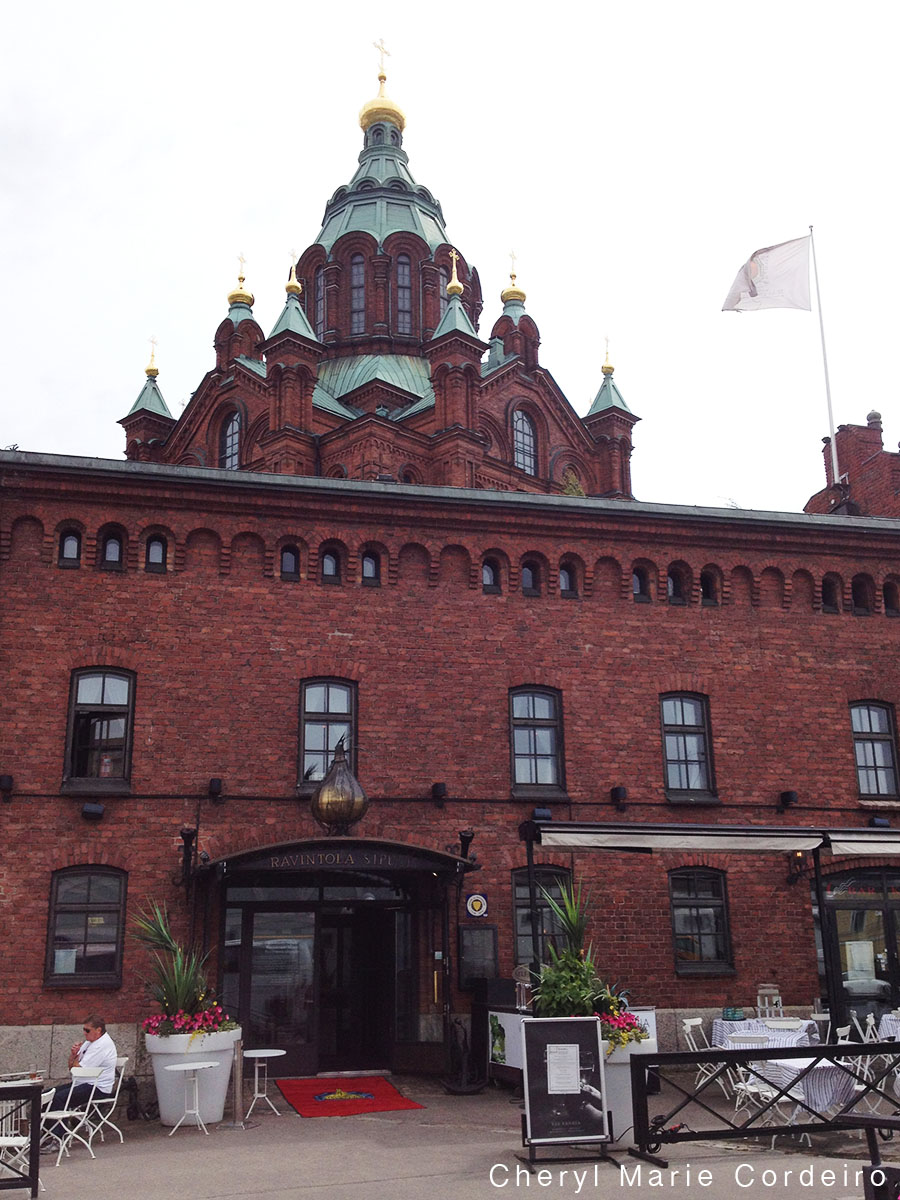 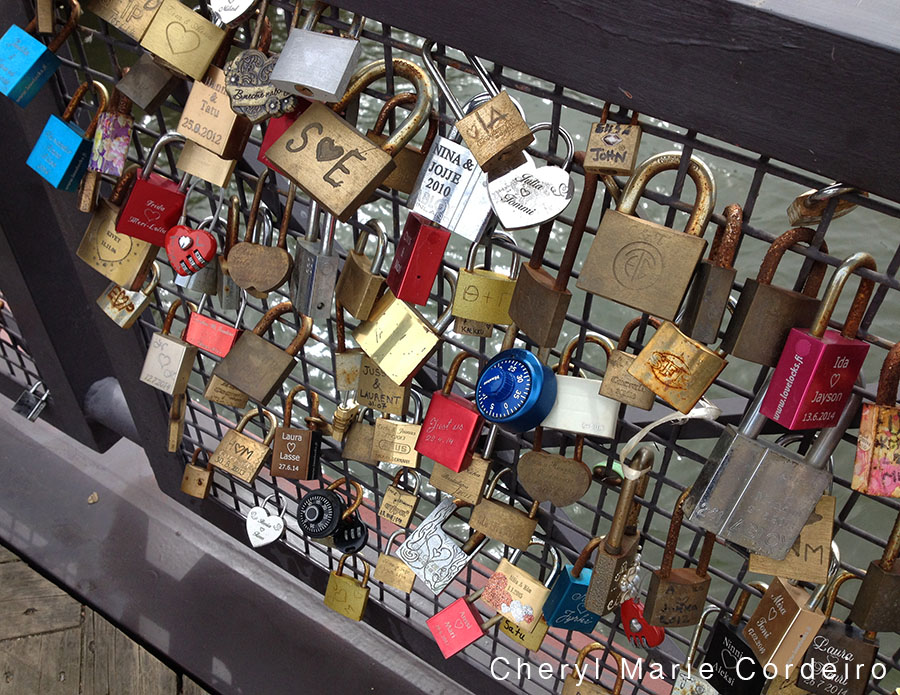 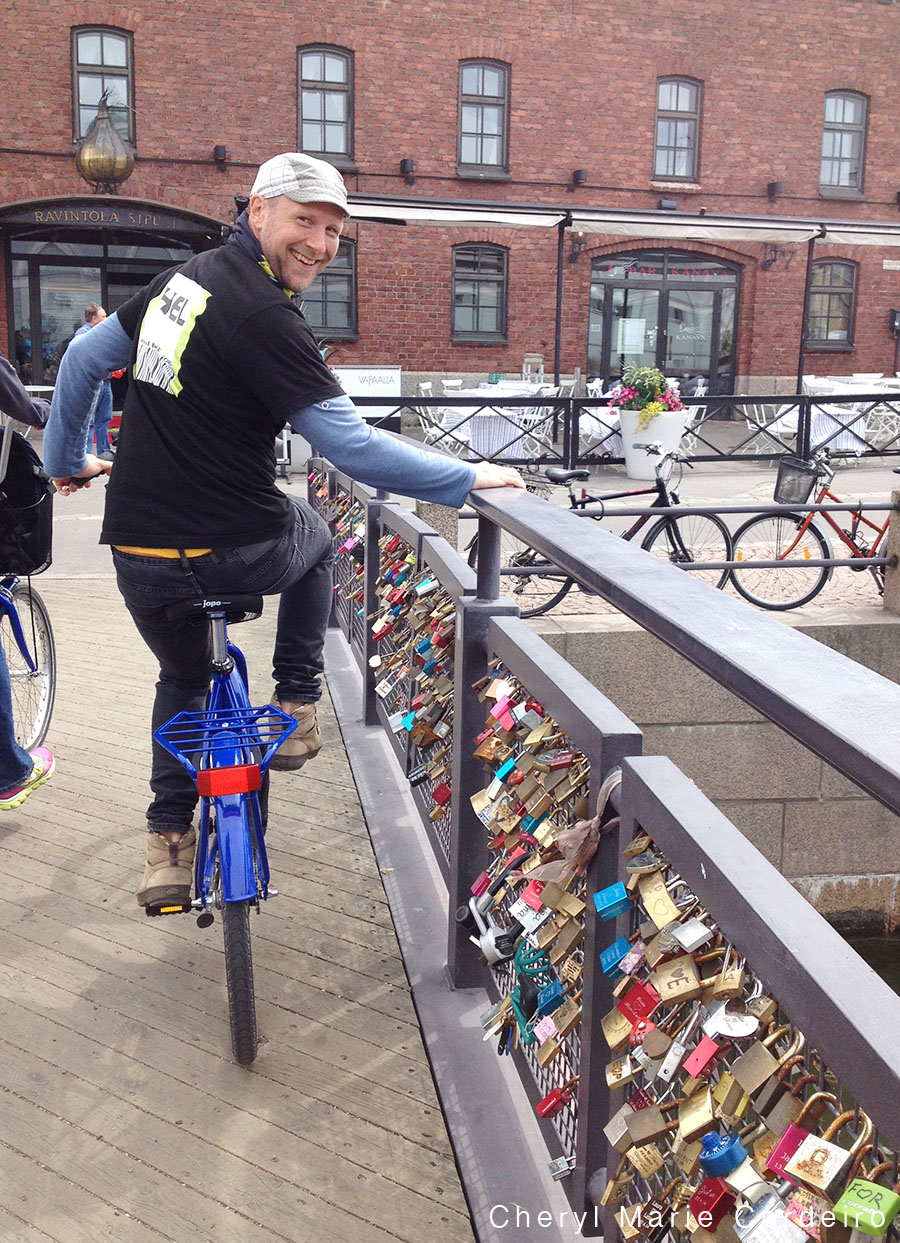