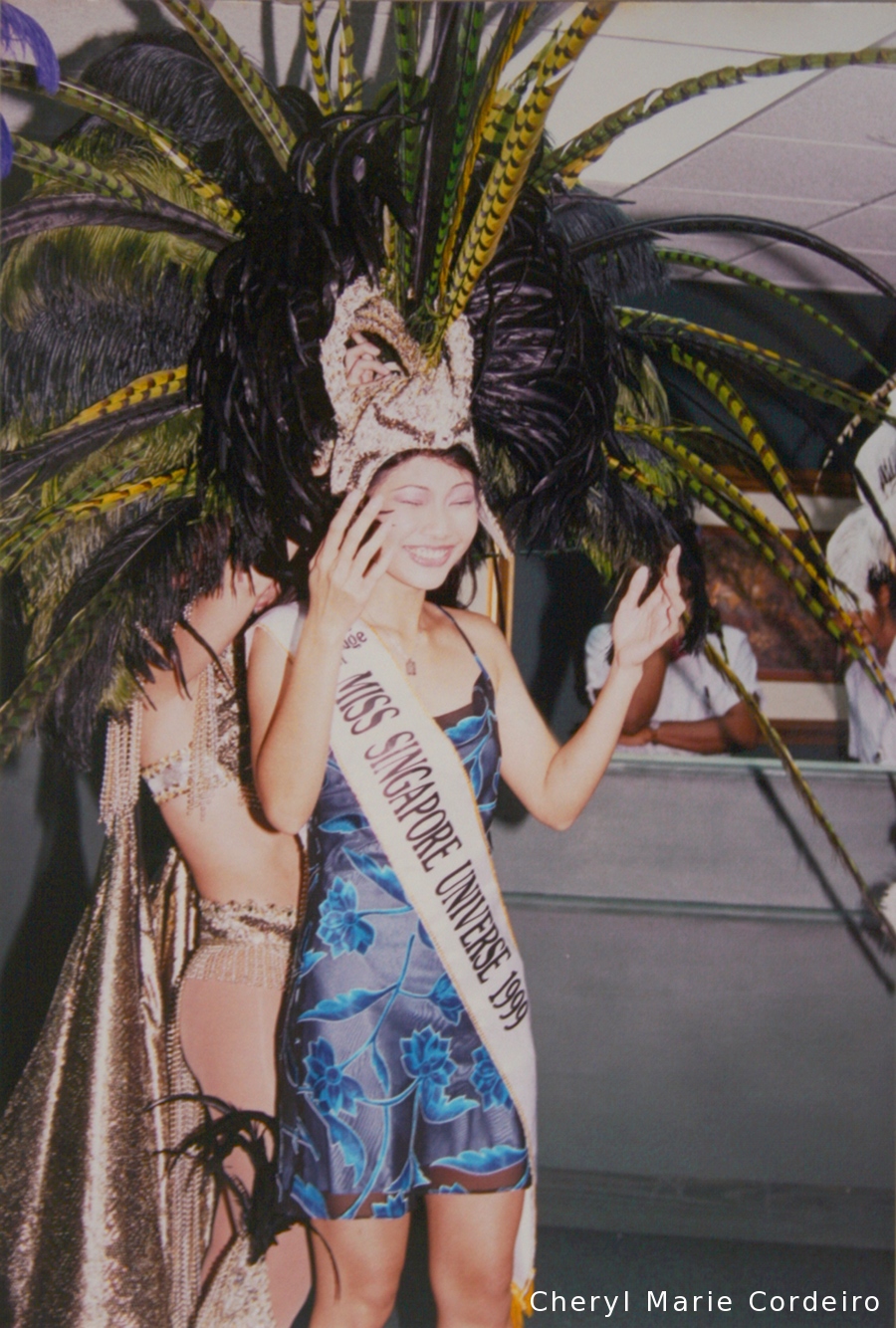 Carnival! was the first thing introduced to me the minute I touched base at the airport in Trinidad back in 1999, as Singapore’s delegate to the international Miss Universe Pageant 1999.
Text & Photo © R Yong Cordeiro, JE Nilsson, CM Cordeiro, Sweden 2015

The seminar ended and a colleague, Stefan, and I walked out of the room. The topic of the seminar was about Southeast-Asia (SE-Asia) and its developing context in the latest wave of globalisation.

“What did you think about the ideas from the seminar?” I asked.

I knew Stefan to be of a brilliant mind, and knowledgeable on the region of SE-Asia, “But you said not much at all in feedback.” I queried.

“Yes, well there is not much to say. The entire perspective is different from how I see it. So the departure point for argumentation is different. I would not have approached the topic of SE-Asia from that point of view.” he said.

Stefan’s comment left an impression on me, because perspective or point of view is what creates a departure point for conversations. And in order to have meaningful conversation, the perspective and its departure point, needs some form of common understanding in order for any information to be exchanged at all. I once asked another colleague of mine, “Do you ever go back to what you wrote and re-read it?”. “Oh no. I never like doing that. Because I can never agree with myself!”

So here, began my thoughts on the atman project.

It took a little more than twenty six hours to arrive from Singapore to the island of Trinidad, making three transits along the way. Flying through the night, there were several firsts for me at the time when I was twenty four, in the month of May of 1999. For the first time, I travelled alone. For the first time, I would be away from Singapore and from family, for a lengthy twenty one days. For the first time, I saw the blanket of stars that covered the night sky, cloudless, from the tiny window of an airplane. The night sky was vast and it was beautiful. For the pageant, I was given a list of must-have items in the wardrobe. A black dress for a fashion show, to which I brought one that my mother had crocheted for me. An evening wear for the stage. A national costume. And at least three evening gowns for formal dinners to be had. Any number of shoes as your luggage space affords, to which I brought for the entire glamorous event, just three pairs.

Some mishaps occurred along the way that still make me smile today. A hotel for the night of transit was booked in Newark, New Jersey. I landed in Newark, Delaware. Without a hotel and without a map, I did the next best thing I knew and pulled out my “Miss Singapore Universe 1999” sash and showed it to the airport counter staff who promptly helped settle everything.

The next morning at breakfast in Delaware, Wilmington, a place little did I know I would return to a few years down the road for a visit to the Kalmar Nyckel, a man dressed in a blue checkered shirt and a pair of well worn jeans seated at the next table, stared intently at me, his nose and eyes above his coffee mug. Assuming I understood no English, he turned to his friend, nodded in my direction and said, “Look at her, over there. Isn’t she beautiful?” After a thought, he added, “They’re having the Miss Universe pageant broadcast in about a month isn’t it, Drew?” His friend, acknowledged the remark with a slight nod and grunt. “Well, she’s pretty enough to be in that one.” Drew turned to look at me. I looked away. “Nope, don’t think so Travis.” said Drew. After finishing my own breakfast, I got up to walk past their table. “Thank you for the compliment.” I said to the man called Travis as I walked by.

It was a small airplane that took me from Newark to Piarco, Trinidad. It was not difficult to spot the other delegates from other nations seated in the same plane. There were about two or three other girls. They were mostly tall, very pretty, well dressed, made-up in the face, and in stilettos. I wore a camisole like blue floral chiffon dress that ended above the knees. My shoes were Nike. Twenty minutes to landing, I gathered my hand carry and went into the small cubicle of a water closet on the plane. At the time, I had not considered that it might end up a challenge fixing my hair and make-up in that small, confined space. I just did it.

As soon as I got out of the water closet, I was greeted with more than one knowing smile from the aisles of the plane. It seemed everyone was expecting delegates for this big event.

“I see you have made yourself pretty now”, the lady seated next to me said. “My name is Leela Ann. Where are you from? Japan?” She beamed.

Upon landing, the delegates were rounded up by chaperones present at Piarco and led into a room that was alive with the rhythmic sounds of Trinidadian steel pans. Wide eyed and feeling as if I had put on one too many layers of camisole, I soaked in the atmosphere of the tropical climate as its hospitable culture. I have had no prior experience of carnival, having for reference points the Singapore National Day Parade and Chingay, but the similarities of festive dress and music was there and it was easy to get into the flow of the reception. The percussion proved irresistible, and I couldn’t help but move to the beat, stilled for one minute only by a large feathered headgear being placed on my head.

In the twenty one days spent on the islands of Trinidad and Tobago, I got an opportunity outside of rehearsals and filming to visit Leela Ann’s home. I remember receiving a large empty suitcase from her as a gift, “It’s for all the presents that you are getting when you are here. Take this with you, it will help you bring everything back.” I looked around her home. It was cozy and modest with thick soft plastic for flooring, and wood furniture. I was grateful for her generosity, of pelau for dinner and the gift. I got to know her two daughters, Jodi and Jolene with whom I kept in contact for a while after 1999.

There are many narratives to tell of the twenty one days in Trinidad and Tobago, some of which found their ways into various publications at the time between 1999 and 2000. In this writing, my thoughts are on the words I wrote in an article for the Eurasian Association Publication back in 1999, and perhaps another that had as theme, the globe in my hands. My thoughts are on the individual’s journey inwards, of self discovery, described by Wilber as one’s Atman Project [1]. Where each stage of personal development lends a different departure point in conversation that calls to some extent, a revisit to your own developing self.

In the article for the Eurasian Association Publication, I had written, “my people”. And it was not five years ago that there was a discussion in Singapore at the Eurasian Association, on what defined a Eurasian. There were technicalities of heritage, if one parent was from heritage x and the other heritage y, then the child could be defined / categorised as Eurasian. I had at the time, a different definition of what is Eurasian. We are a people of voyageurs. That is how we came to be. But if asked that again today, I might not have an answer still so clear. Because in a sense, as embodied by the calypso rhythm of the islands that had the ability to bring together people from different nations into a single swing, and in Viktor Frankl’s own reasoning – are we not all voyageurs? And in that sense, there is little such coherent thing as the words “my people”, as heartwarming as it sounds. Instead, the launching perspective should be that we are everyone’s people, the smaller division of which is one that is myopic and false, useful for purely national / regional administrative purposes.

Already at the time of the international beauty pageant in 1999, I had encountered on my first day at Trinidad and Tobago, so many beautiful girls that I knew there could not be one prettier than another. Any judging criteria would prove irrelevant because there is not one international standard of what is beautiful. All reflected their own national perspective of beauty, and all were facets of the same prism. There was no one culture or language superior to another, and we did much better by sharing our knowledge of our own countries with each other. Even struggling to get our meanings across whilst communicating was made more fun by the lack of a common language. A lingua franca needed to be set up almost immediately between the girls.

If there was a perspective that I see today, but not then, it would be the many layers of reality between what went on at rehearsals and during filming, within the bounds of the glitzy pageant scene, and what went on outside of it. The juxtaposition of realities and happenings. I will for a long time, remember a people who were kind to me in Trinidad and Tobago, those who showed me a little of what they called home.

In reflecting upon my own words from when I was twenty four, I would certainly say today, be careful what you wish, because it might just come true. In your own project atman, most certainly put effort into making things happen and ‘turn puffy dreams into reality’. But what is it really that you wish to make happen, almost certainly benefits from time in thinking. With global networks, the world indeed can be seen as our playground. But it is perhaps that very reason why it is crucial we do not treat it as such, and that we see ourselves as one with it, with each other, and act in the understanding of that philosophy. 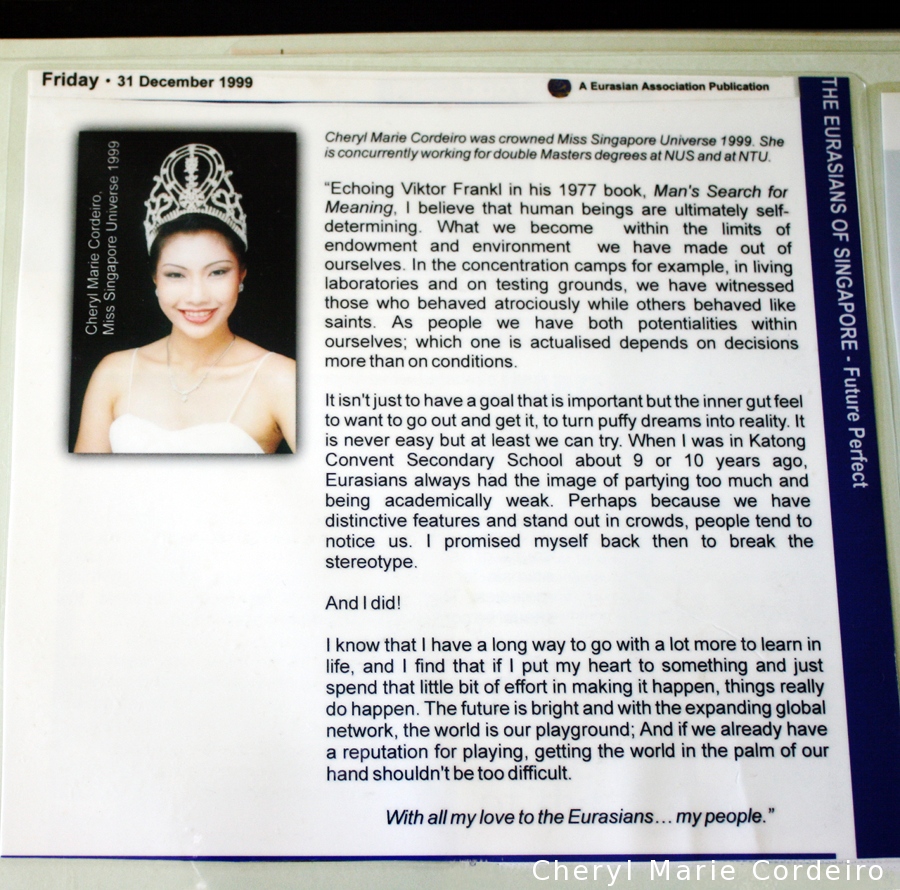 Everyone’s atman project.
And I had always been interested in existential questions, apparently. Viktor Frankl (1905-1997), founder of logotherapy, a form of existential analysis, had explained that Logotherapy, compared to psychoanalysis was a method less retrospective and less introspective. It was a method of therapy that focused on the future, where meanings were fulfilled by the individual themselves. His anthropological findings were enabled by his phenomenological approach to human nature which saw the spiritual dimension and conscience as fundamental aspects of human life. Tengan’s comment on Frankl’s “conscious philosophy” [2] reminds me today of a comment I hear often, “Others come to me with practical questions. You come to me with existential questions. What is your question today?” 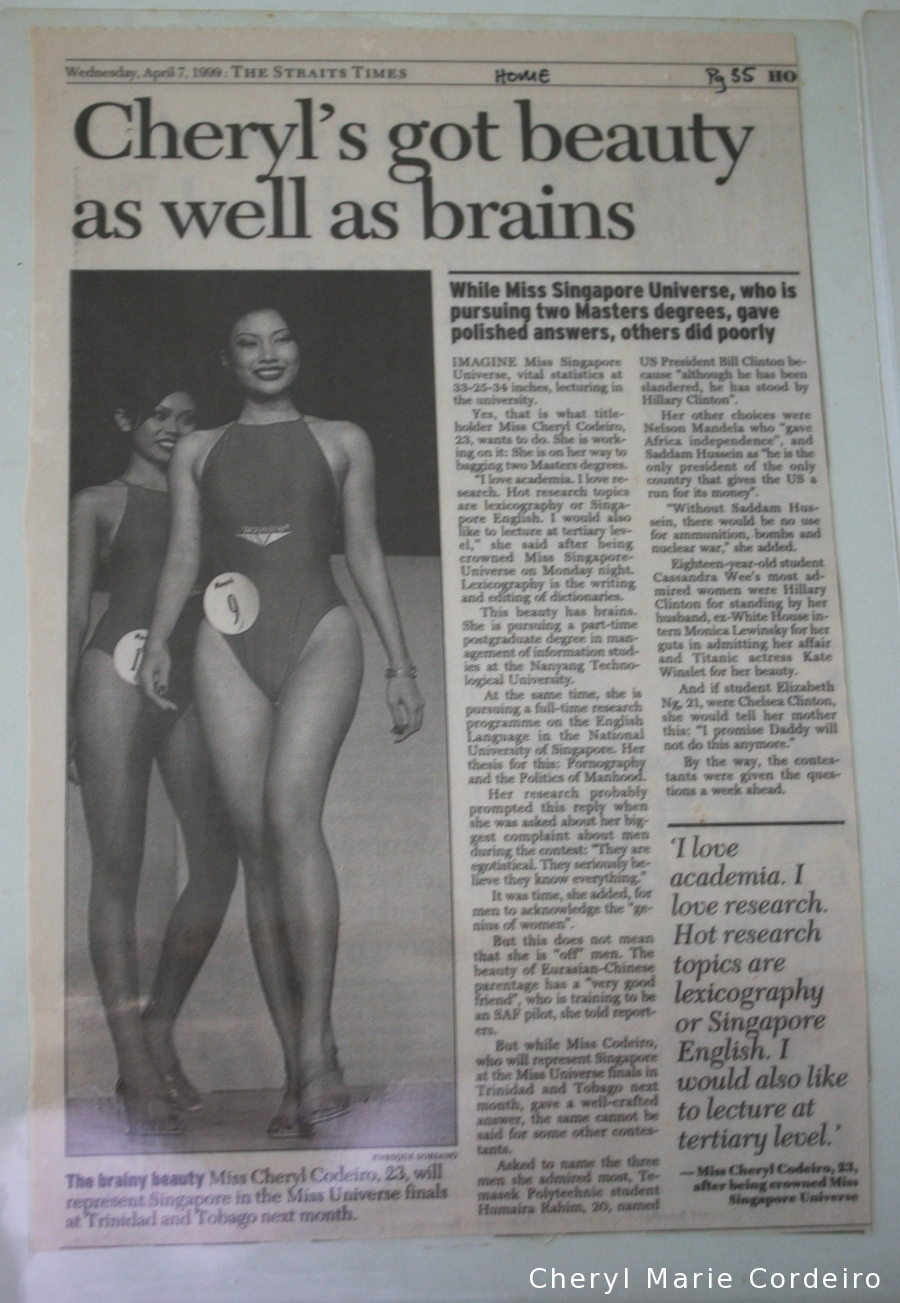 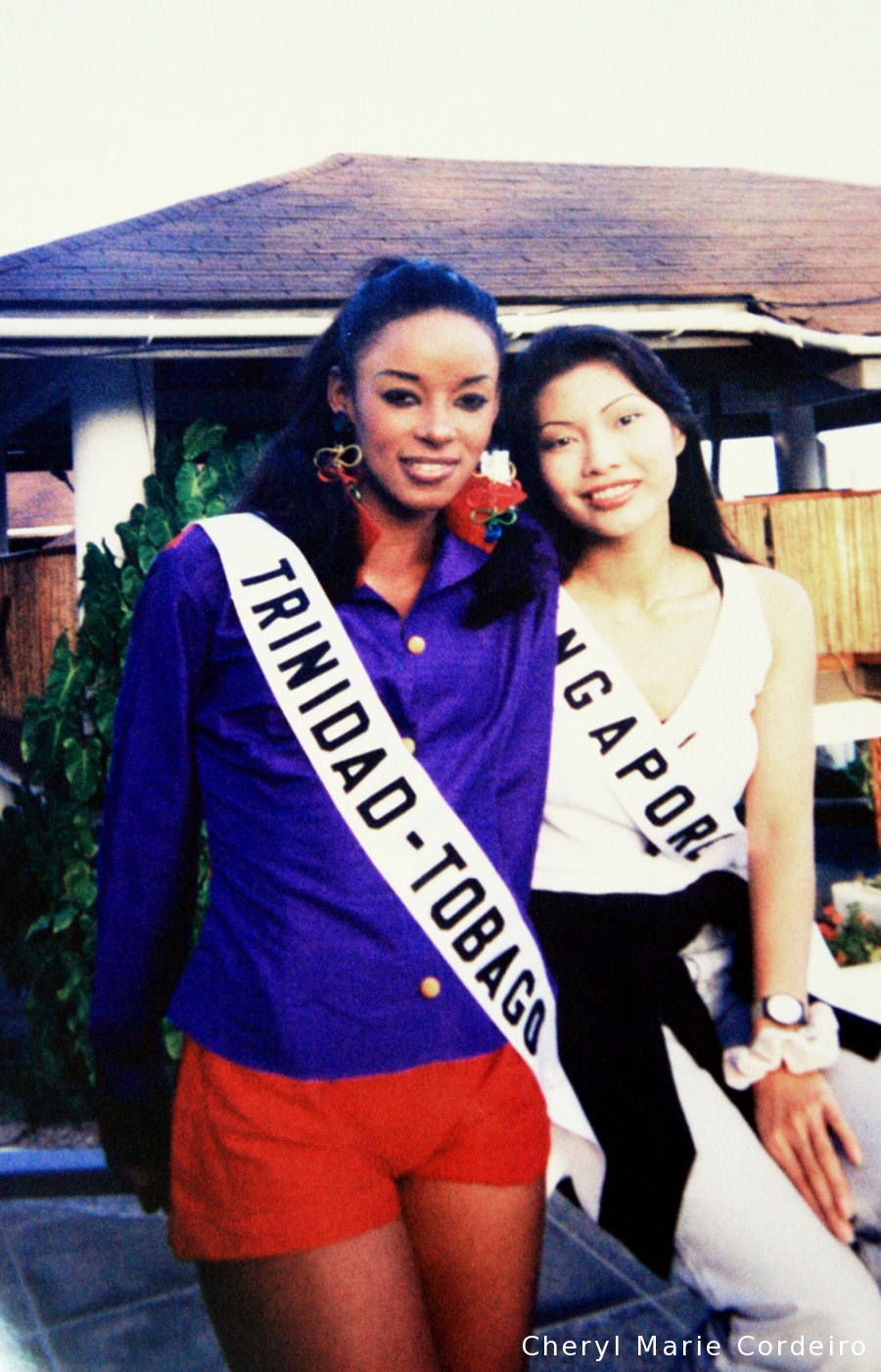 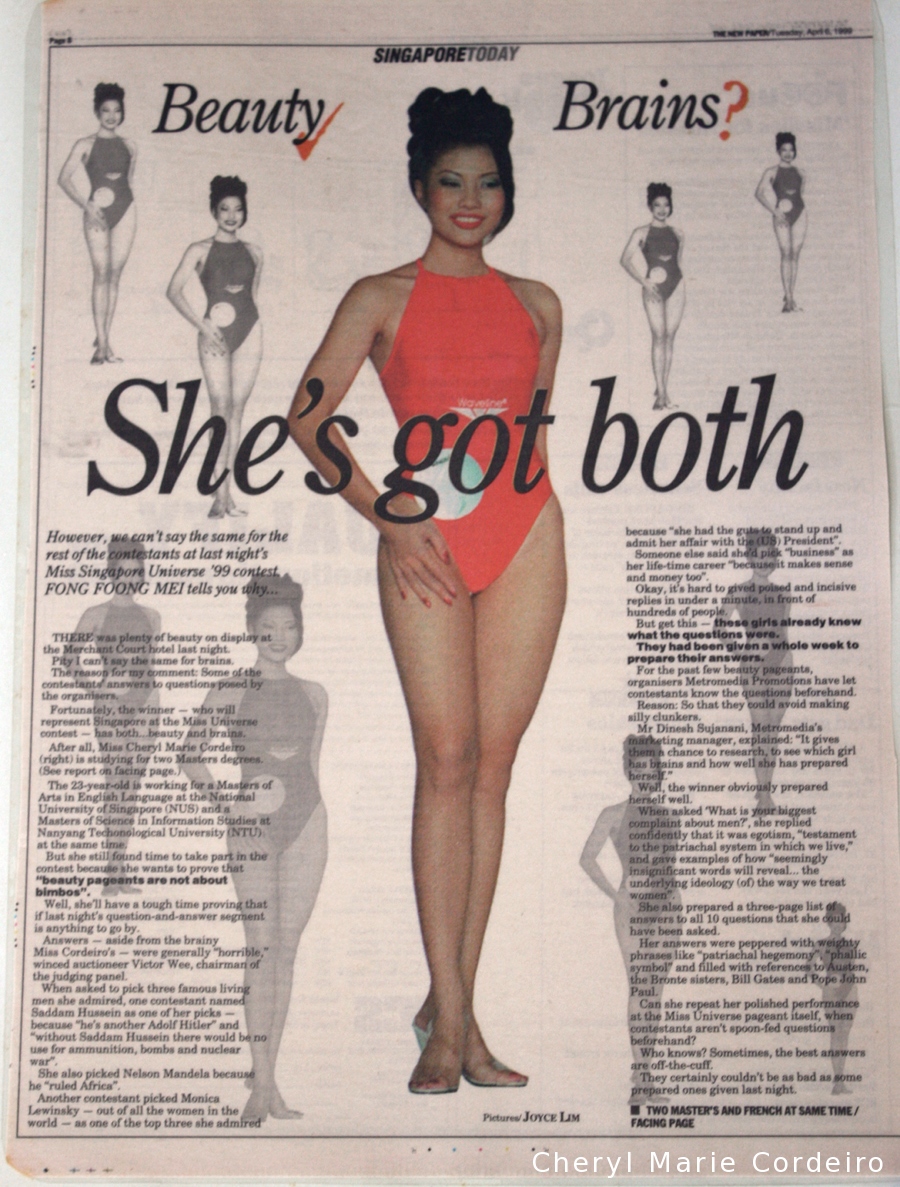 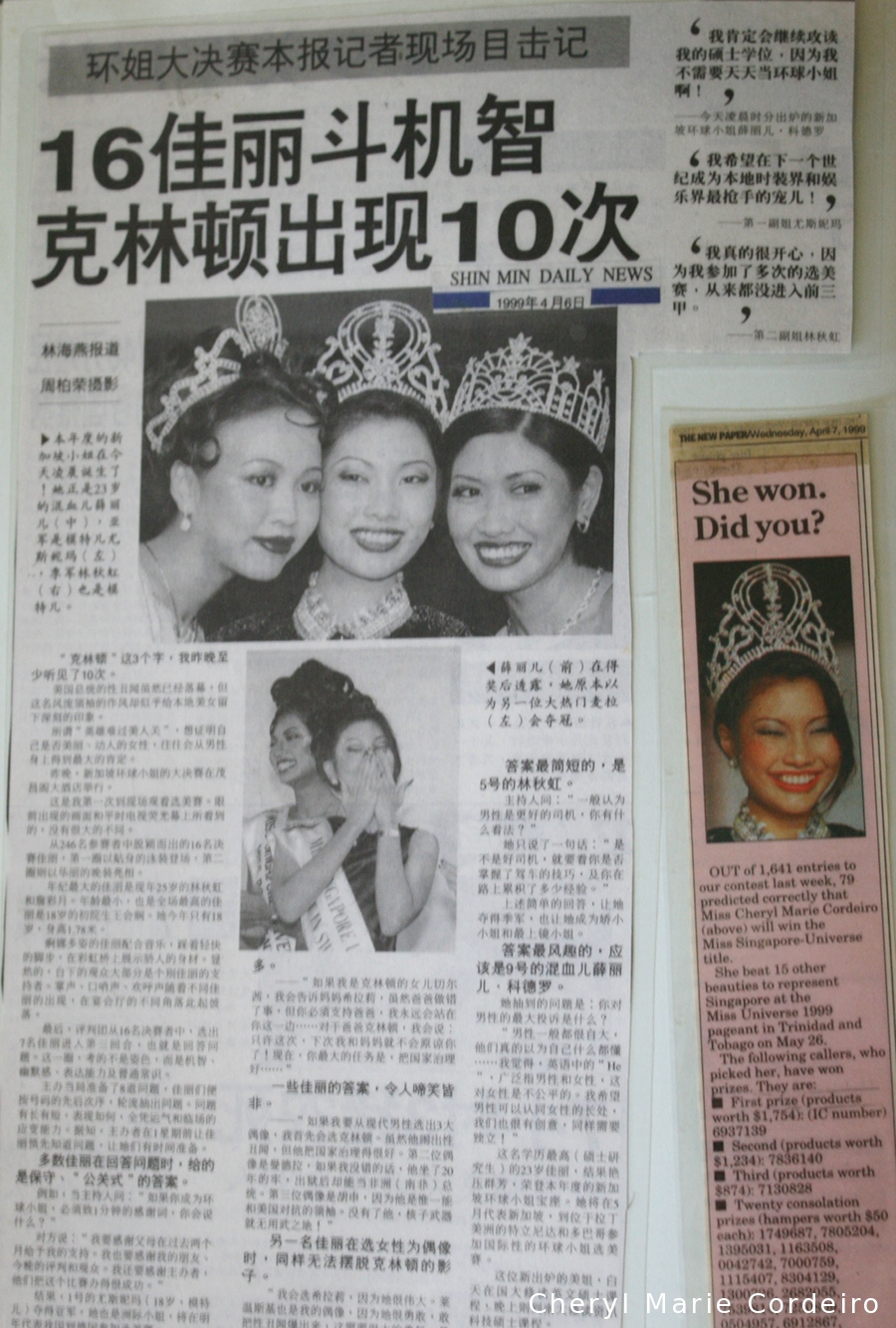 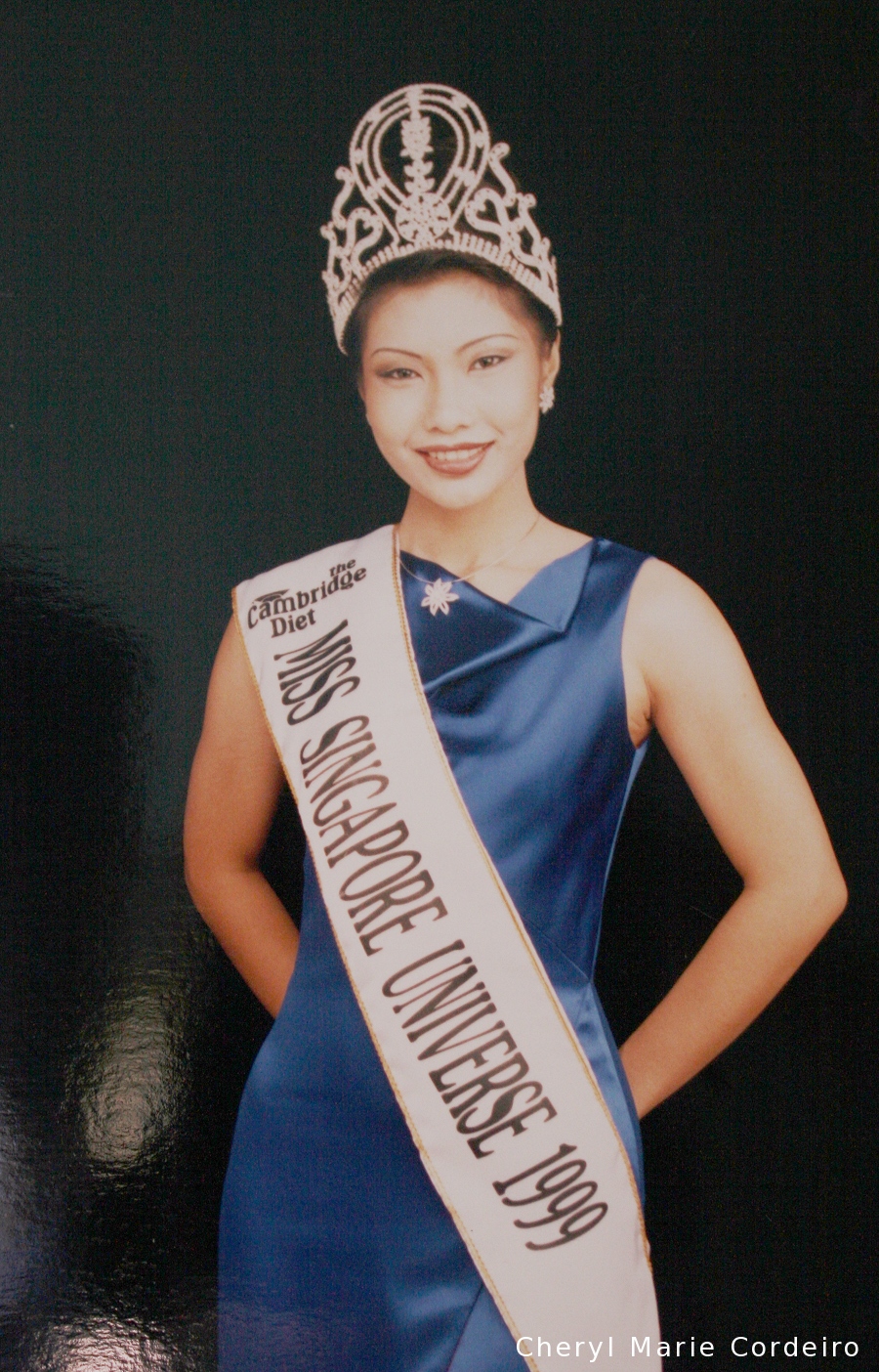 One of several portfolio photographs that delegates could bring to the international pageant as a form of a signed business card, a postcard gift from one girl to another, or else, for the crowd. In the night’s winning blue dress, designed by Celia Loe. In a gold embroidered cheongsam variation. On stage in Trinidad and Tobago, the swimwear round. Counting down from five, for the camera. In the local T&T press. Trinidad and Tobago stage. Opening dance with Singapore represented, front and centre stage, “Because Singapore can shake those hips!” it was said. Signatures of delegates to the 1999 Miss Universe pageant.