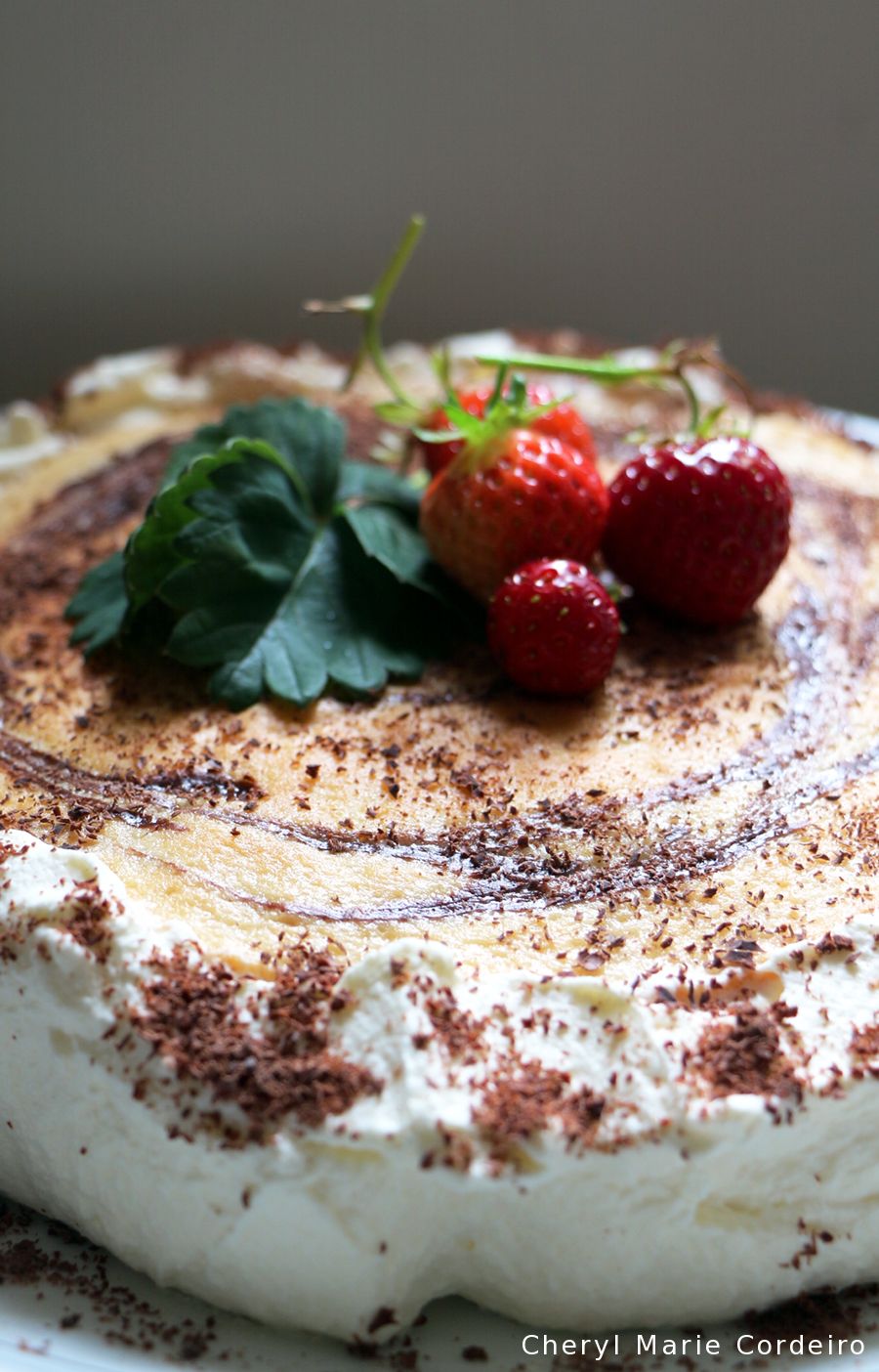 As a child attending school in Singapore at the Convent of the Holy Infant Jesus (CHIJ), I thought the convent was good at putting together one thing, a fundraiser event. The convent had fundraiser events at least once every year where the monies collected were allotted different purposes. In a good number of years, they were to go to the building of our very own new convent and school grounds. In other years, they were to go to the vicinity’s Catholic Church or a designated children’s charity.

A large part of the fundraiser event consisted of nuns, teachers and parents putting things out to sell to an open house public. To this end, the foyer and the school sports field would be lined with the wooden benches and tables taken from the school tuckshop / canteen. The tables were then covered over neatly with various items. It was a school fair where you could find odds and ends, from old clothes and used school books to handcrafted works of art, embroidered decorative items. My favourite items were the homebaked breads and cakes, much like the kind still available at a small neighbourhood bakery in Singapore.

It was at these fundraiser events that I would roam the foyer and school field to find curiosa to bring home when not helping my mother tend to our own make-shift stall. I found these events fun because the hours of the day were not regulated as much as on a normal school day. School lessons were out for the day, and I was allowed to eat as and when I wished. Lunch and teatime during these events consisted of mostly sweets and cakes I could find from the stalls of parents of classmates.

Apart from the bright green, thick triangular slices of pandan chiffon cakes, the other cake that caught my eye was the marbled sponge cake that wafted through the air like a rich mix of butter and chocolate. Thick swirls of vanilla yellow and a deep cocoa, the cake had a cottony fine texture, so it was no problem finishing two or three slices in a go, which I often did.

It was this fundraiser events memory of the marbled cake that inspired this baking session that resulted in both a standard Swedish summer fruit cake, made of layers of marbled sponge cake, and a standard marbled cake.

In the 1983 school fair when I was in Primary Two, I held in one hand just this marbled cake when a classmate of mine, whose mother had a stall selling handmade dolls nearby, skipped over to me and asked what I was eating.

“A marbled cake.” I replied, soft crumbs falling off the bitten pieces in my hand.

“You mean like these marbles I’m carrying?” She lifted her hand, grasping firm to a netted bag of colourful, round smoothened natural stones, her eyes twinkling and proud. I recognized the bag of marbles. It was a game usually played by boys in sandy patches of a field. My father had plenty of such marbles he kept as winnings when playing in his own school grounds or back at the kampong. Those natural stones were heavy, and precious.

I nodded, my mouth too full of cake to speak.

“But that cake doesn’t look marbled. It looks like its just got splotches of brown and yellow, like a giraffe!” she giggled.

“But it’s called Marble Cake.” I managed in a muffled tone, shrugging.

Unconvinced, she shook her head. “A marble looks like this…” she then proceeded to untie the netted bag which contained the rounded composite stones. And in that moment, her grasp slipped. Out of the bag, in more than a dozen tiny patters of different rhythms of heights of rounded marble hitting concrete floor, poured the chimes of twenty such stones, each rolling in just its own direction.

She squealed for help. I shoved whatever cake in hand to mouth, thereafter proceeded to help recover the stones for her.

Although I cannot recall if we got all stones back in the netted bag, the melodic chimes of those marbles hitting concrete floor still ring clear in my mind.

The smell of this cake when baked, brings me back to that 1983 afternoon spent with slices of chocolate butter cake, roaming the CHIJ school field, inspecting the curiosa in the foyer, and chasing marbles. 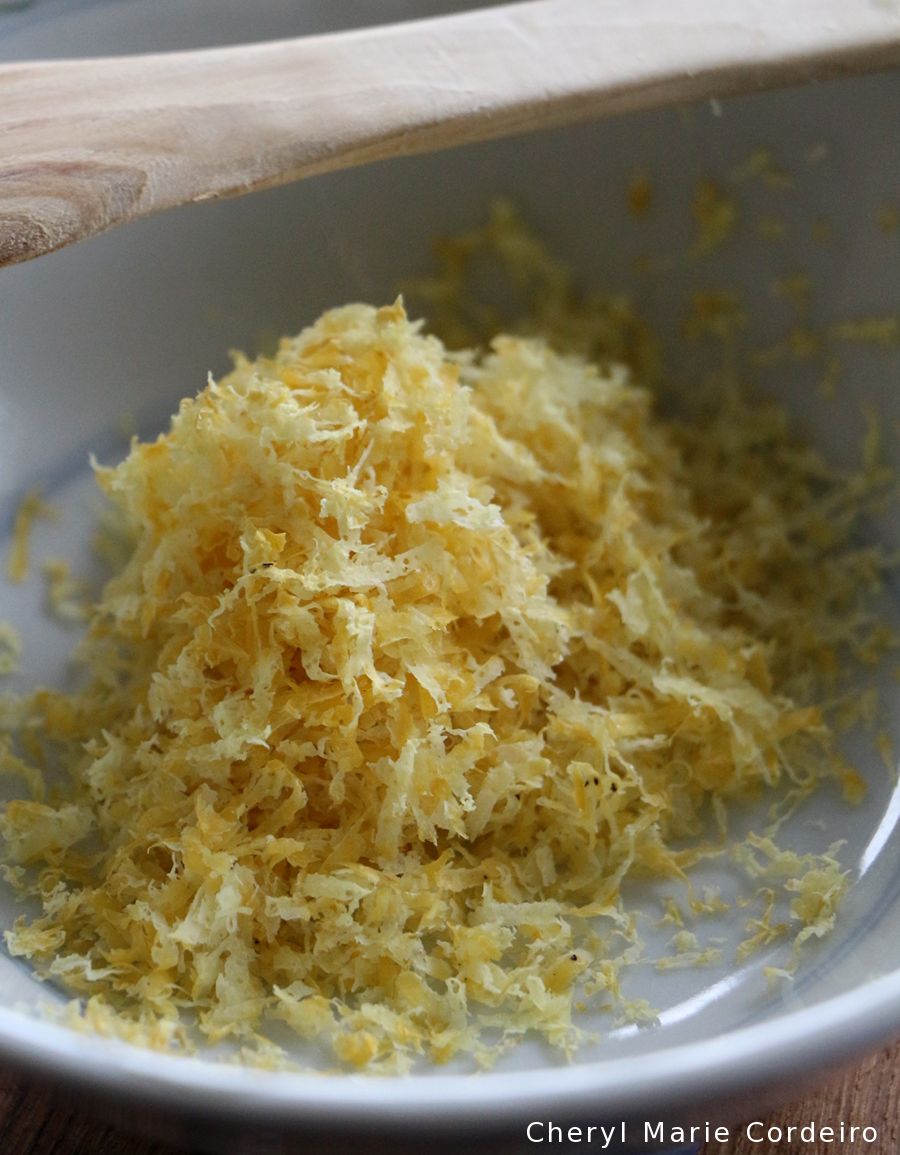 I had in my own tigerkaka, the zest of about one lemon, though I think orange zest would do just as well. 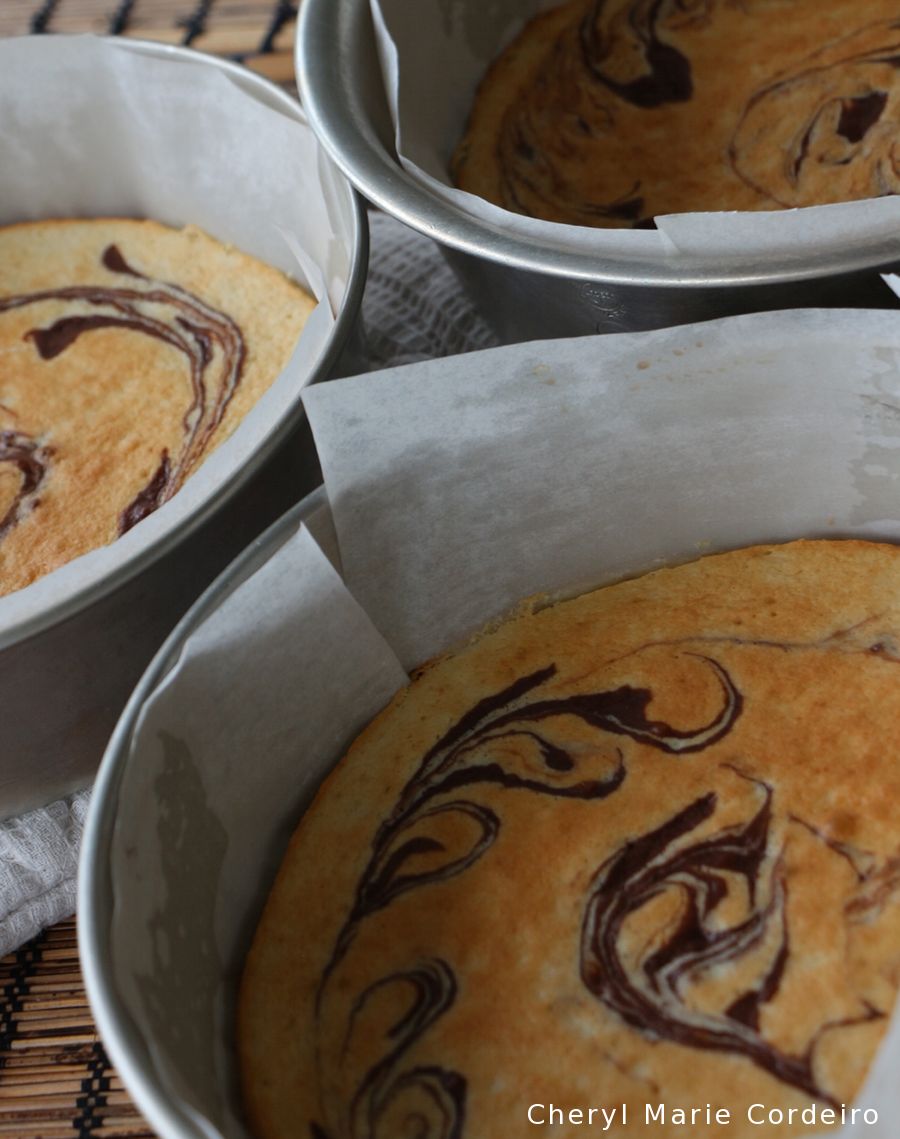 Three sandwich layers of any fruit and cream of your choice, as long as they are bananas and strawberries. 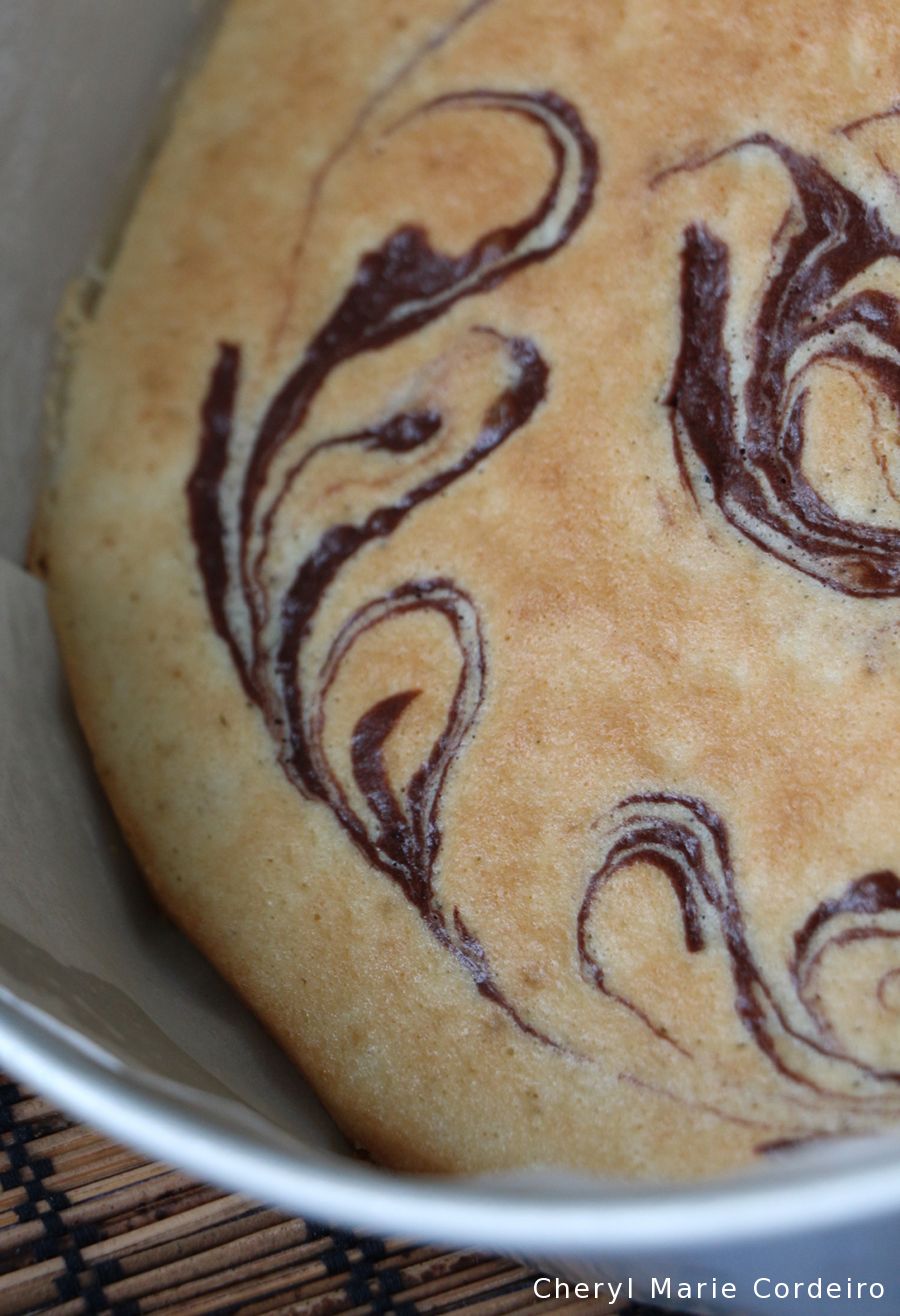 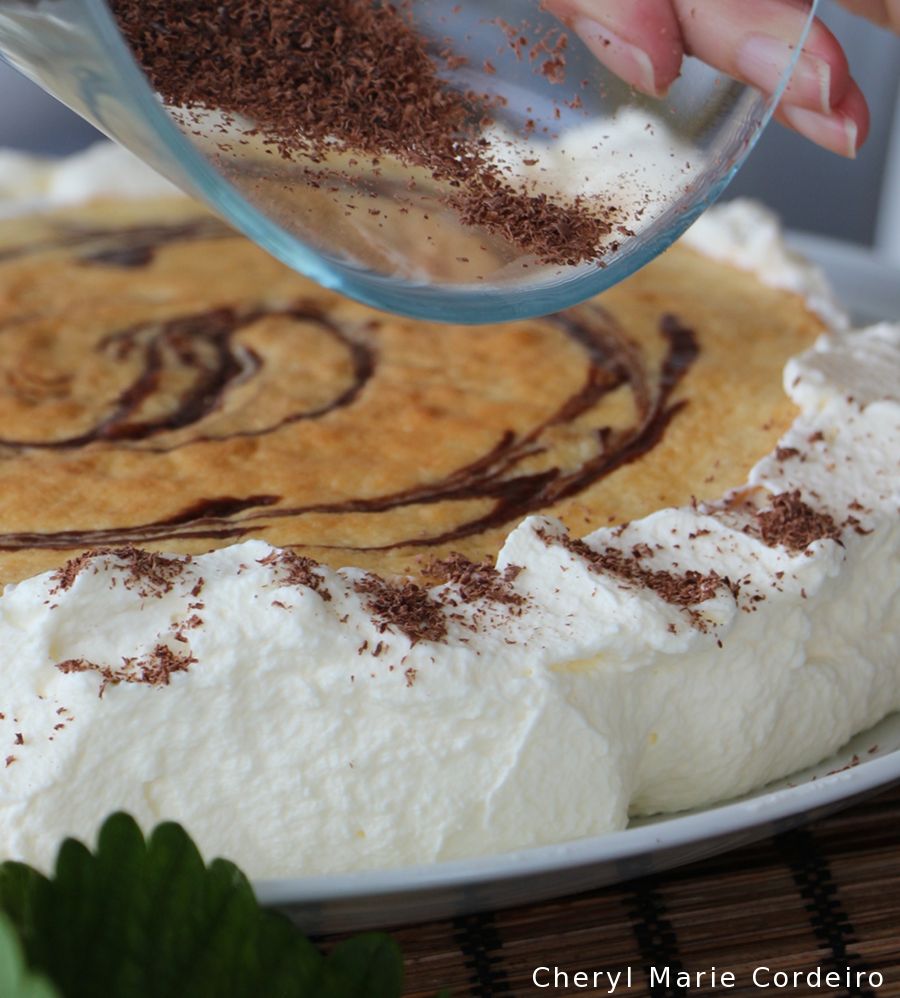 A light dusting of 80% Coeur de Guanaja, is almost not possible. 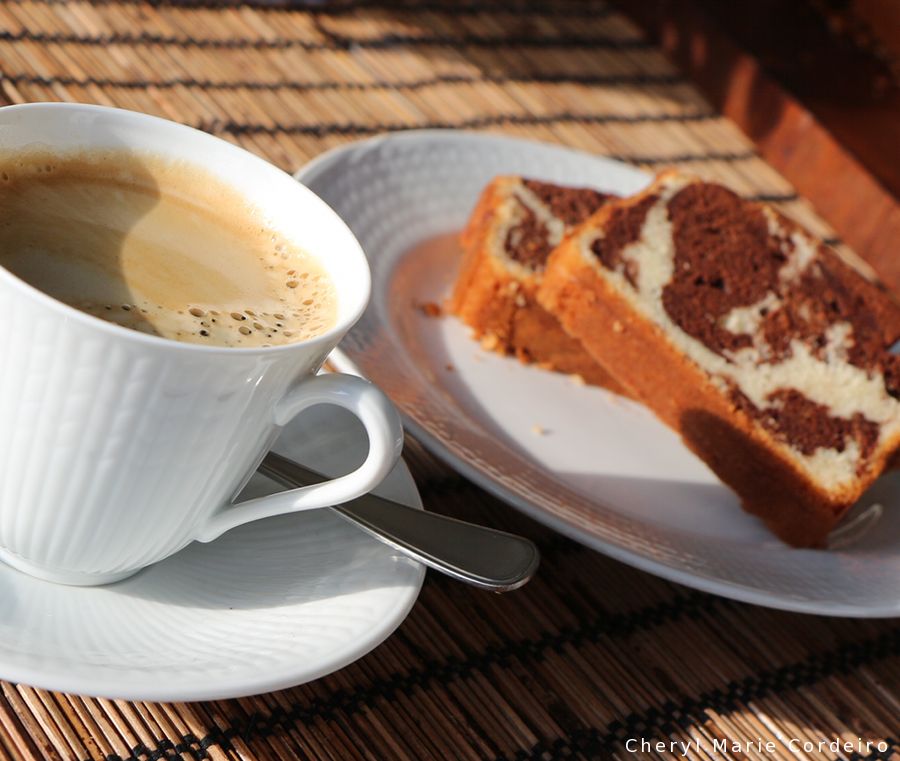 Swedish tigerkaka.
“What happened to the swirls?”
“It’s Rorschach. I was aiming for Rorschach.”