View from the top of the Stein Castle ruin, whose foundations were laid some time before the 1100s.
Text & Photo © JE Nilsson, CM Cordeiro, Sweden 2015

It was about a decade ago that I sat in the Singapore regional headquarters office of a Swedish owned multinational enterprise, speaking with its Managing Director. The topic was about the general managing of conflicts within the organisation, when we touched upon the concept of Time, and whether that was viewed in linearity:

$1: what happens if you disagree
$2: well you tell / you tell and eventually you do agree / because all disagreements end with an agreement if you’re lucky / or you become / enemies /
$1: do swedes generally see time as a straight line
$2: well no / i would see it as a circle / my time is a circle / i have no idea what others do / and strangely enough that the year and the day / goes in different directions /
$1: is that [understanding of time] a result of [an understanding of a certain philosophy] or
$2: i have no idea / if christmas is six oclock then april is three oclock / and summer is noon / october is nine oclock / but if you’re asking if we are on time or not / yes we are

Baden is a town with a long history. A history that you are made aware of as you walk its small, winding cobbled streets from the banks of the the river Limmat up to the city church and then to Stein Castle ruins. And it was here that I could not help but reflect upon the words of that conversation, that took place so many years ago in a Southeast-Asian city, that couldn’t be far more differently configured than this European town.

The Managing Director at the time, regarded Time as a conceptual circularity, where Time could be experienced as going in seemingly opposite directions on the same clock interface.

With Baden’s rich history written in its architecture, the structure of the city planning and its streets, one cannot help but literally see the circularity of Time effecting all activities in this town that begins and ends the day with the chimes of the church bell, today nondescript and romantic, framed in complement to the background of rolling hills, but there nonetheless as a rhythmic heartbeat of the peoples in its radius. 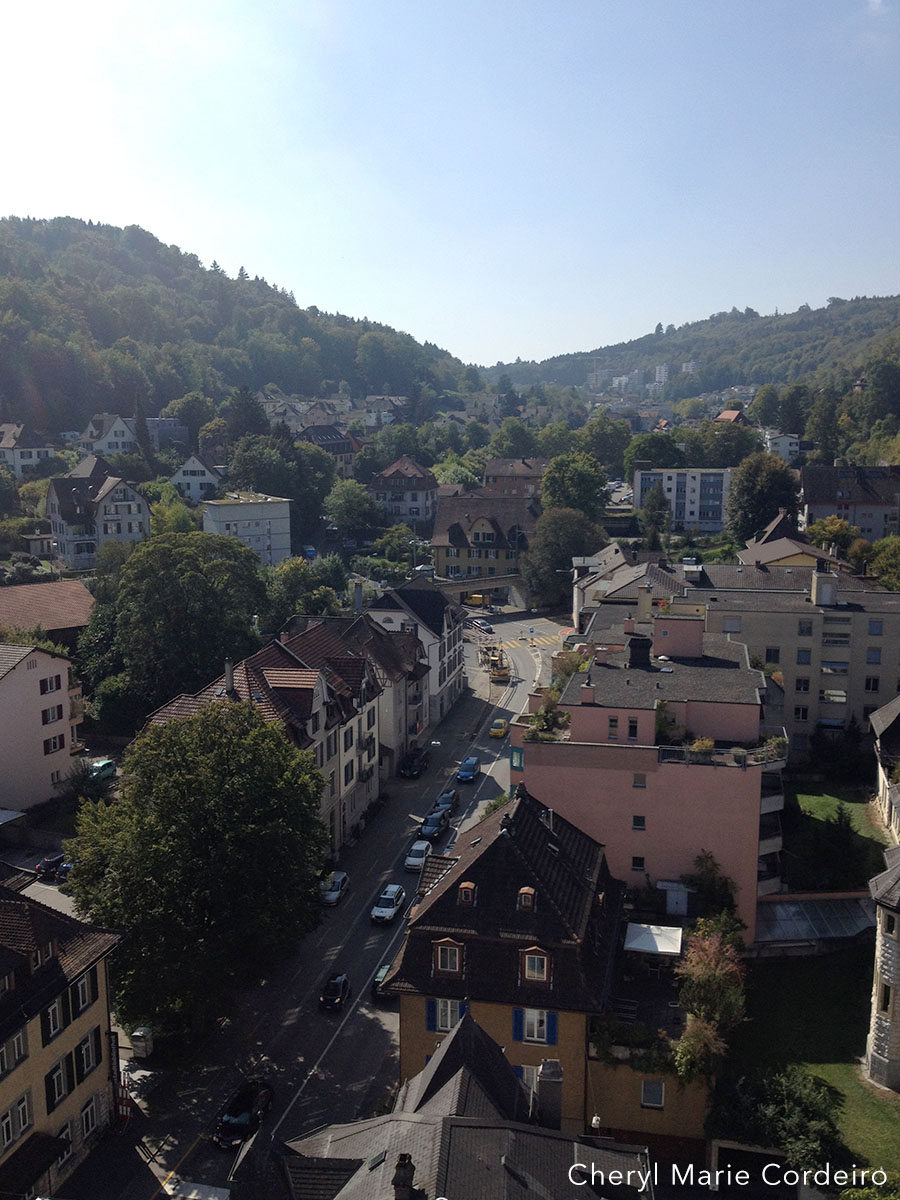 Located on the west bank of the river Limmat, Baden is a small, highly picturesque town nestled in rolling hills that feed it hot spring water for as far back as from the times of the Roman era. Walking along the bank of the river Limmat, into the heart of the city centre, near the central train station of Baden. Looking up at the roofs of buildings that have existed from 1500s, sights such as these colourful paintings on the undersides of sunshields greet you. 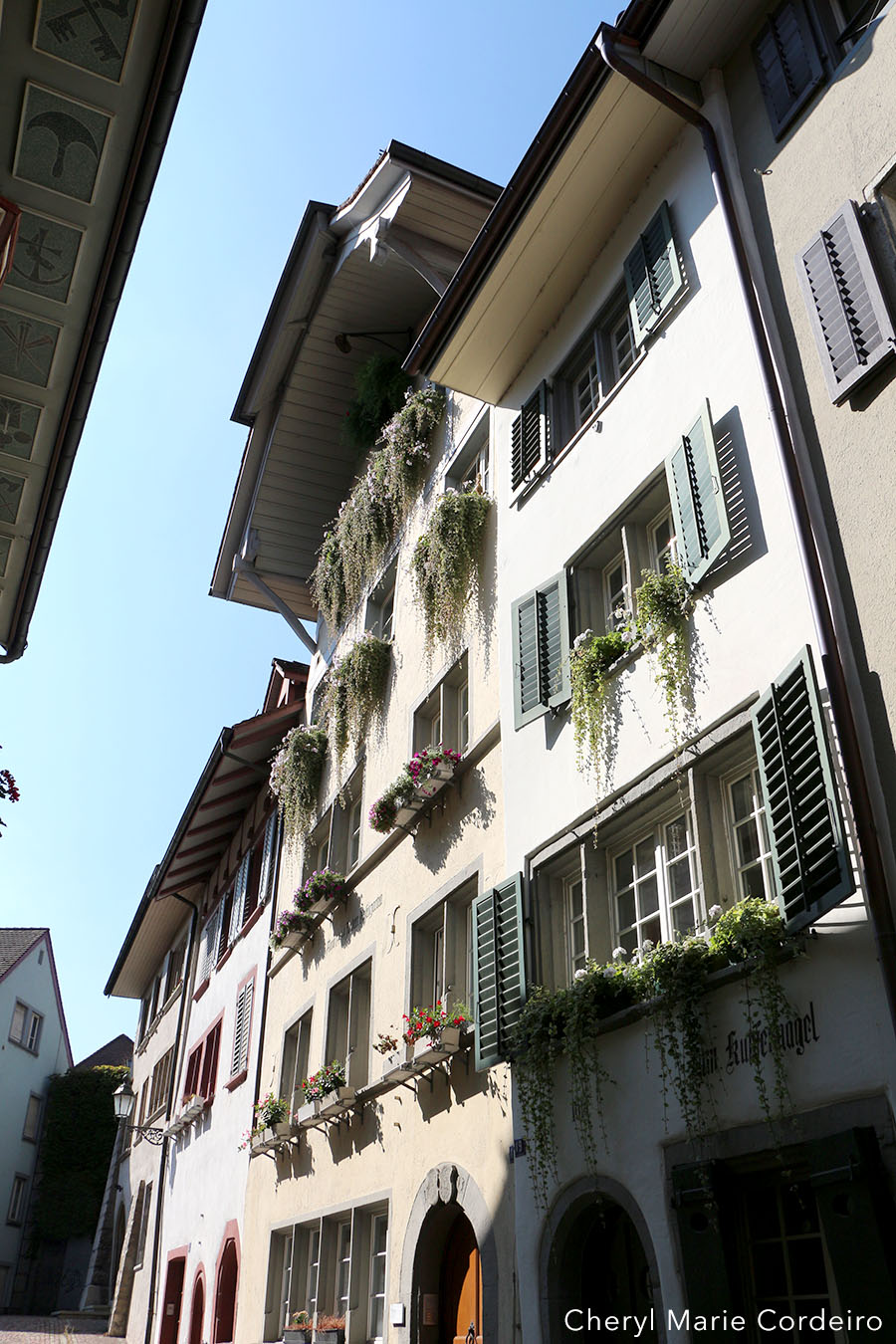 Draping greens over balconies and windows, as romantic in view as what recalls paragraphs of Shakespearean plays. It’s a steep climb, each step and turn leading up into the castle ruins as fascinating as the last. It is only to do it often enough to get to know the stories told by the cobbled pathway that had been at your feet for more than a thousand years. 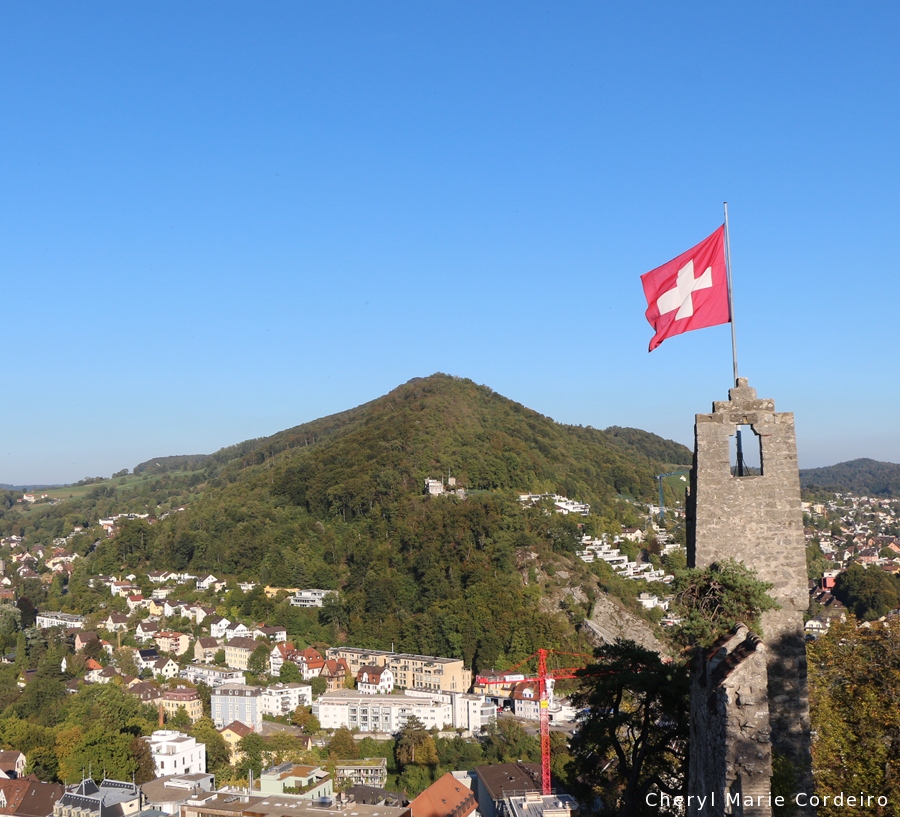 Standing on the grounds of Stein Castle ruins. 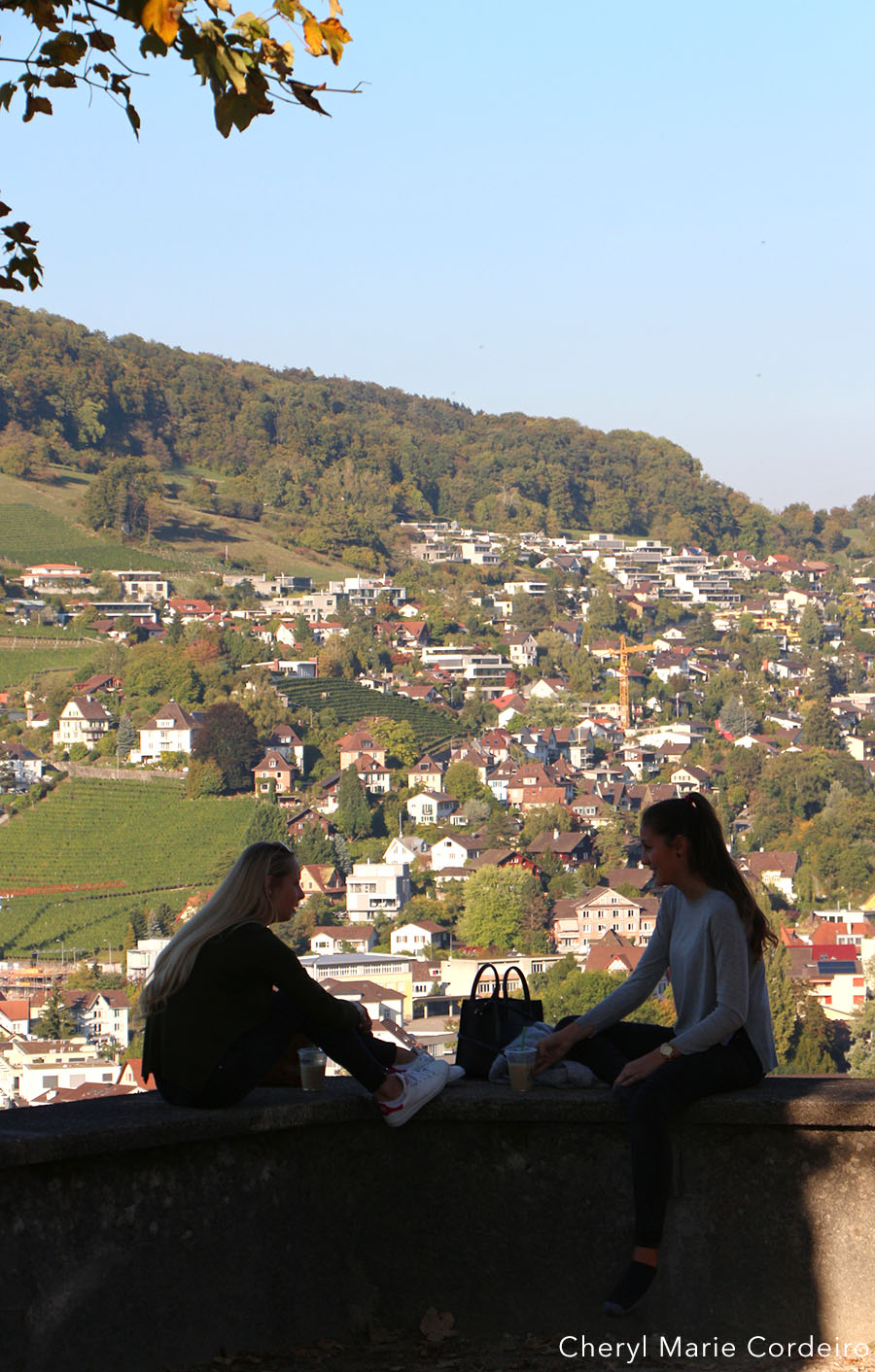 Not far from where these girls sat is the tower of the castle that contains large tolling bells (pictured above), not much different from that which belongs to a cathedral. This scene reminded me of when I was growing up in the convent, and what I would do after school hours of just sitting, a cold Ovaltine with a burger or sandwich as lunch, before heading home in late afternoon. The slight difference laid in that my scene was not high up in the ruins of a castle framed by rolling hills, but rather, the breakwaters of the sea in the tropics. 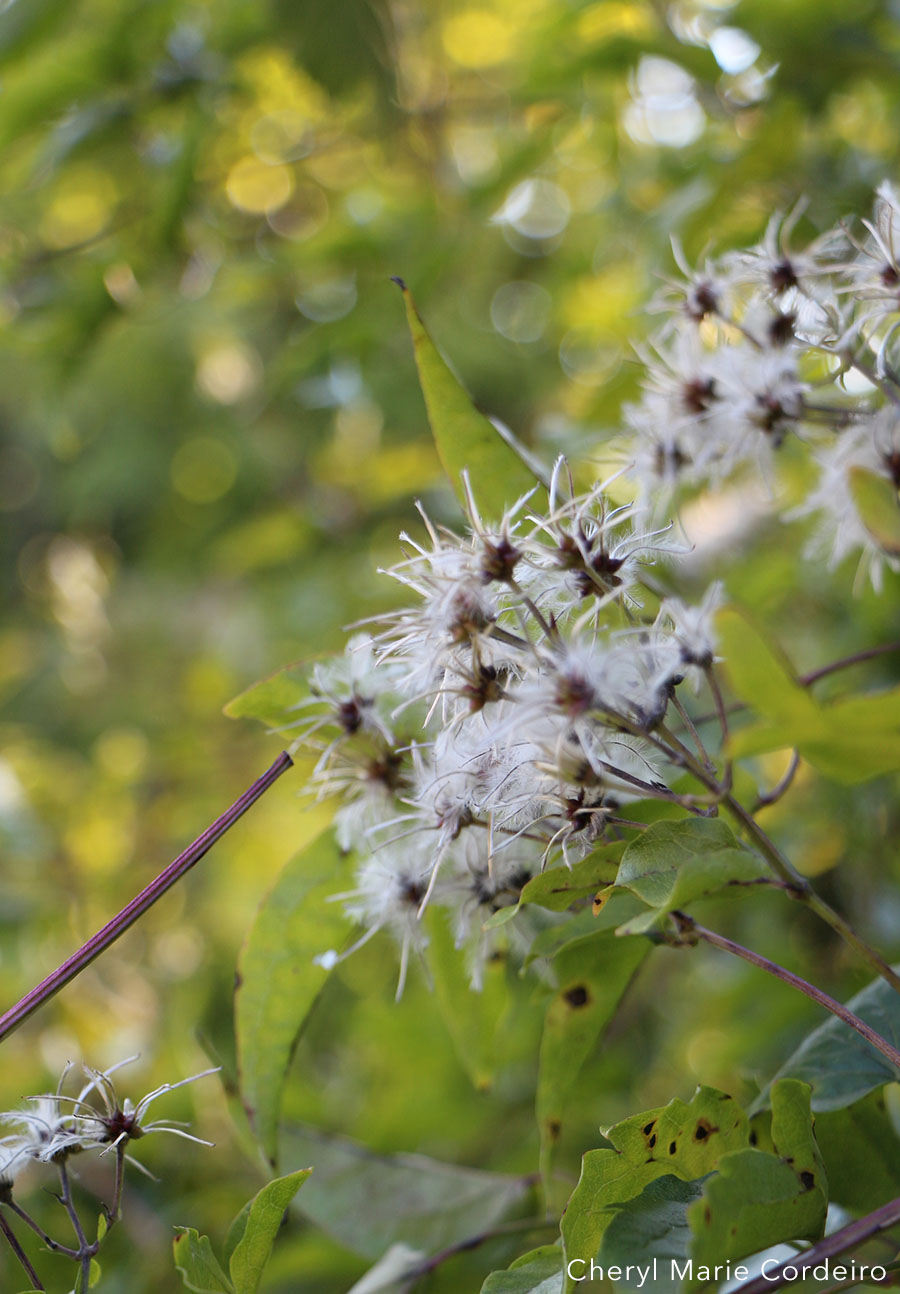 Saturday mornings are harvest market days in Baden. From Barcelona, to Maastricht, Sweden and now Switzerland – I love market days! I could spend hours discussing produce, how they got to the market and how best to bring out their textures, their flavours on the culinary front. 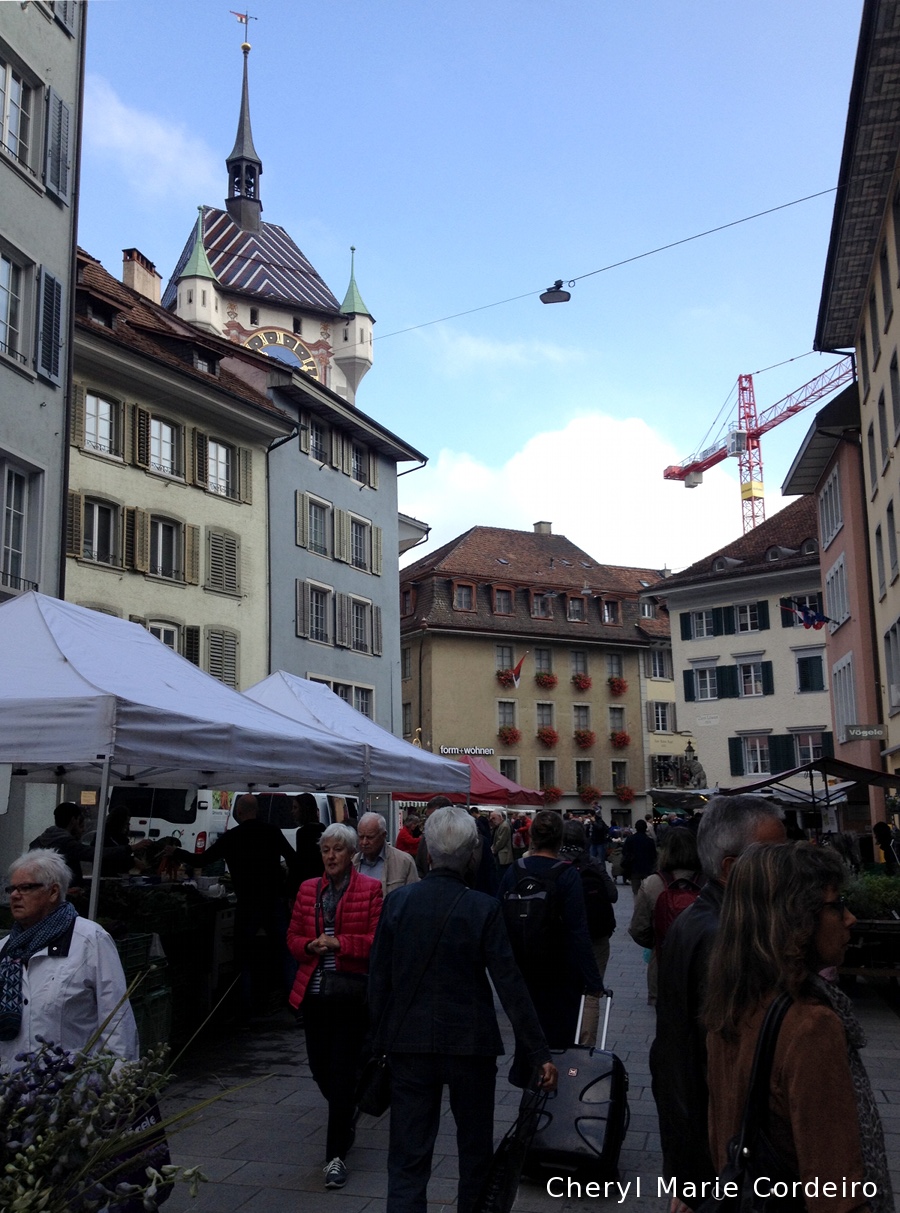 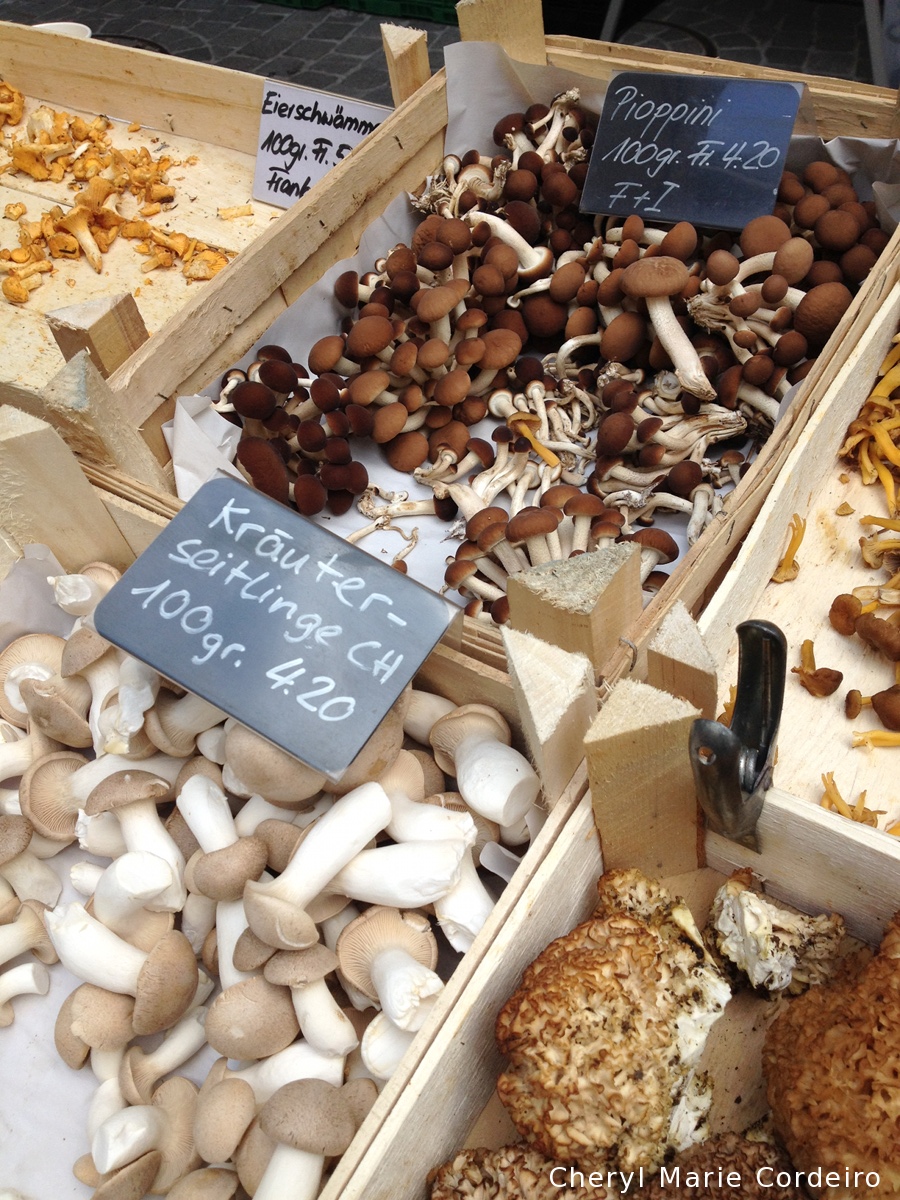 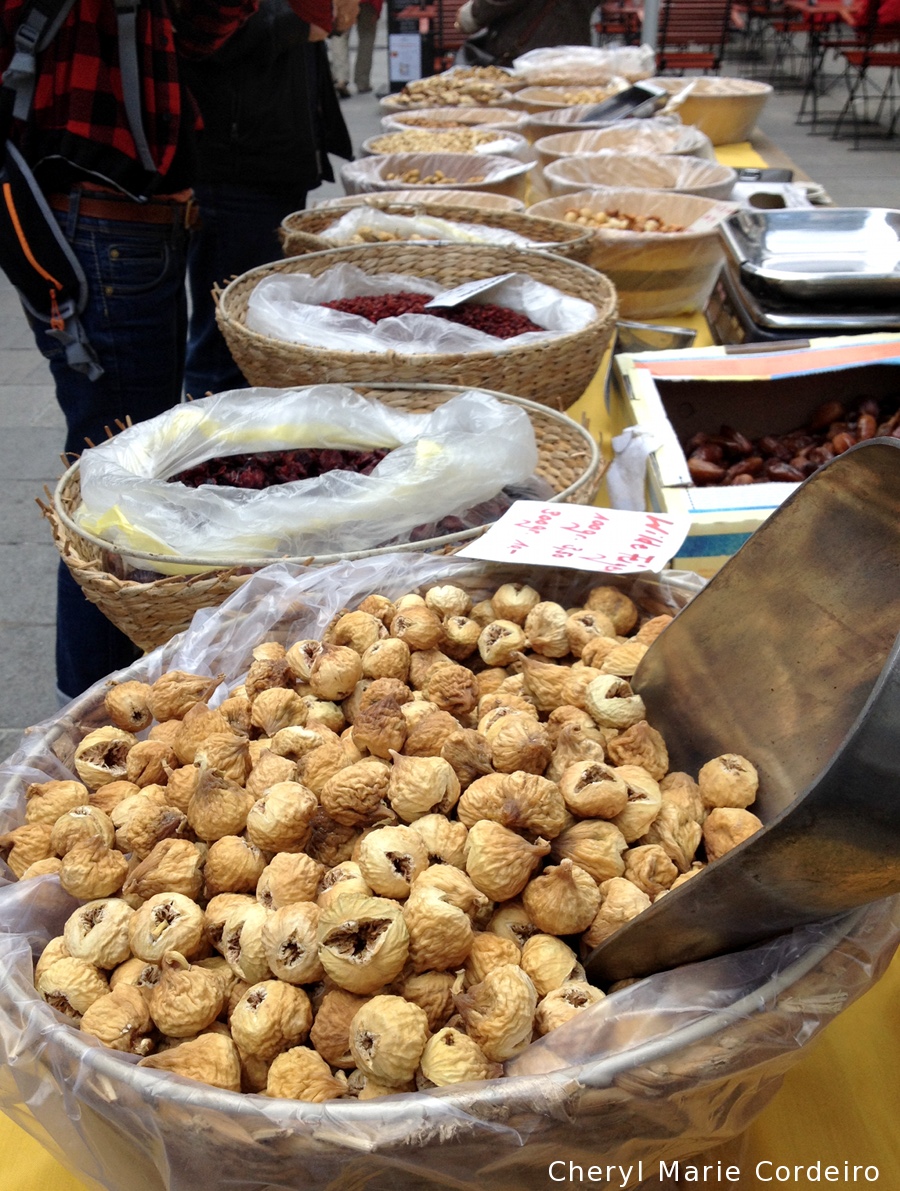 Some of the prettiest pumpkin / squash harvests as decorative gifts I’ve seen.